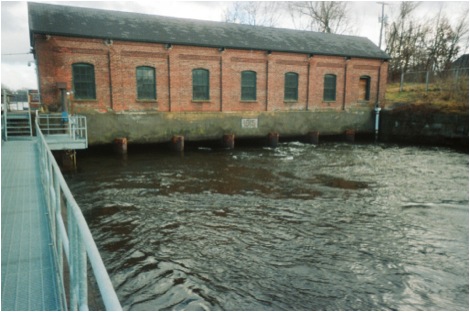 The project is situated upstream of two other hydroelectric facilities located on the Chicopee River and downstream of three more on the Chicopee River. Upstream are Collins (LIHI #88) and Red Bridge (LIHI #96). Downstream are Chicopee Falls (FERC No. 6522), and Dwight (LIHI #170).
The project works include a cut-stone dam topped with 1.6-foot flashboards, a canal headgate house, a power canal, an intake structure for two operating penstocks, a powerhouse with two operating generating units, a tailrace channel and appurtenant facilities.

The canal headgate structure is a brick structure on a concrete foundation that houses the seven intake gates that control the flow from the impoundment to the power canal. There are seven steel head gates, each 8.4 feet high by 9.4 feet wide. Each gate is equipped with rack and pinion hoists. A minimum flow discharge pipe was installed just downstream of the canal gatehouse. The dam creates a bypassed reach approximately 1,600 feet long.

The power canal extends from the headgates to the penstock intake structure. The canal is approximately 1,300 feet long by 76 feet wide at the gatehouse, narrowing to 52 feet wide at the penstock intake. The inner sidewalls are constructed of cut-granite, and earthen embankments create the outer walls. The canal has a cobble floor. An 88-foot-long canal is on the north wall of the canal, adjacent to the headgate house. The intake structure includes two operating underground penstocks (and two closed in 1970). The powerhouse contains two operating generating units having a combined capacity of 3.7 MW.

The project operates in a limited store-and-release mode and impounds a 74-acre reservoir. It utilizes the useable storage capacity (35 acre-feet) afforded by a 0.5-foot drawdown year-round. The station is operated automatically by float controls. The project provides a 247-cfs bypass flow, or inflow, whichever is less. The flow regime was developed in the late 1980s with concurrence from US Fish and Wildlife Service (USFWS). Studies requested by USFWS were conducted in 1999 which confirmed that minimum flows were adequately met via flows passed by upstream dams.

Waters within the project reach are designated as impaired for pathogens, e. coli and fecal coliform, due to sewer overflows. The Massachusetts Department of Environmental Protection has confirmed that the project is not responsible for river impairment.

The Chicopee River watershed is not currently the subject of migratory fish management efforts and downstream dams create a barrier to upstream movement. American eel is the only migratory species found throughout the Chicopee River system. While not designed for passage, the minimum flow discharge pipe does permit downstream passage.

The project property consists of roughly four acres of mixed forest and two acres of deciduous forest surrounding the impoundment are potentially Priority or Estimated Habitat for bald eagles. The remaining lands are developed and open water. The project does not plan on disturbing any of the forested areas, but should that change, the project will consult with USFWS and Massachusetts Department of Fish and Wildlife (MDFW) should any such activities become necessary.

Threatened and endangered species potentially within project vicinity include: Northern long-eared bat and bald eagle. The project owner does not plan to cause any ground disturbance or tree removal which could impact critical habitats for listed species. The project has committed to follow guidance from MDFW and USFWS concerning minimization of impacts to the protected species.

PLUS-Standard Option: The Owner may seek to collaborate with local recreational interests and abutting landowners on potential options for providing a cartop put-in far enough downstream from the confluence of the bypass and tailrace to minimize hazards from sudden release of flows to the bypass in the event the generating unit suddenly trips offline. If a put-in is installed, whether or not on Project land, the Owner can request a PLUS standard at any time prior to six months before the expiration of the Certification term. LIHI will determine whether or not to award a PLUS standard for recreation and extend the Certificate term for three additional years.

2022: No material changes or compliance issues were identified. The project remains in compliance based on the annual review. The project filed a FERC license amendment request to change to run-of-river operations with reduced minimum flows in the bypassed reaches of all owned projects on the river. The changes were developed in consultation with resource agencies via a settlement agreement and revised agency terms and conditions. Flow changes were based on flow/habitat study results. FERC has not yet acted on the amendment. For Condition 1 (now satisfied) the project submitted an agency-approved operations compliance plan as part of the FERC amendment request. The project reported no changes in conditions 2, 3, and 4.

December 5, 2019: The Low Impact Hydropower Institute has preliminarily approved Low Impact Recertification for the Indian Orchard Hydroelectric Project. This decision is preliminary pending the 30-day appeal window. Only those who commented on the initial application during the 60-day comment period are eligible to file an appeal. Such appeal needs to include an explanation as to how the Project does not meet the LIHI criteria. Appeal requests can be submitted by email to comments@lowimpacthydro.org with “Indian Orchard Hydroelectric Project” in the subject line, or by mail addressed to the Low Impact Hydropower Institute, 329 Massachusetts Ave, Suite 6, Lexington, MA 02420. All requests will be posted to the website.  The applicant will have an opportunity to respond and any response will also be posted. Requests must be received by 5 pm Eastern time on January 5, 2020.  The full application and reviewers report are available HERE.

If no appeal requests are received and the decision becomes final, the Certification term for the Project will be from July 19, 2018 to July 18, 2023.

September 6, 2019: The Low Impact Hydropower Institute has received a complete application for Low Impact Recertification of the Indian Orchard Hydroelectric Project.  LIHI is seeking public comment on this application.  Specifically, we are interested in knowing whether you think the Project meets the LIHI Low Impact Certification Criteria, as revised in the 2nd Edition Handbook.  Please review the program and criteria in LIHI’s revised Handbookand then review the Project’s application materials below.

Comments that are directly tied to specific LIHI criteria (flows, water quality, fish passage, etc.) will be most helpful, but all comments will be considered.  Comments may be submitted to the Institute by e-mail at comments@lowimpacthydro.org with “Indian Orchard Project Comments” in the subject line, or by mail addressed to the Low Impact Hydropower Institute, 329 Massachusetts Avenue, Suite 6, Lexington, MA 02420.  Comments must be received on or before 5 pm Eastern time on November 5, 2019 to be considered.  All comments will be posted to the web site and the applicant will have an opportunity to respond.  Any response will also be posted.

December 11, 2013: Indian Orchard Hydroelectric Project has been certified as low impact for a five year term, effective July 19, 2013 and expiring July 19, 2018.  The certification was granted with the following compliance obligations:

July 19, 2013: Essential Power LLC has submitted an application for the certification of the Indian Orchard Hydroelectric Project; application has been posted to website and public comment period was opened.