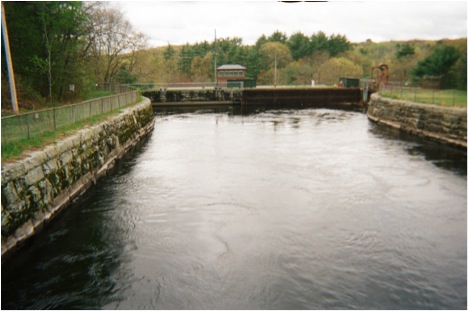 The Red Bridge Project is located in the Towns of Wilbraham, Ludlow, Palmer and Belchertown in Hampden and Hampshire Counties, Massachusetts, on the Chicopee River. The Project dam crosses the town line between Wilbraham and Ludlow; the powerhouse is located in Wilbraham. The impoundment extends in a northeasterly direction, bordering Belchertown and Palmer. The project was originally constructed in 1901 by the Ludlow Manufacturing Company.

The project includes a dam, canal headgate house, power canal, two operating penstocks, a powerhouse with two generating units, a tailrace channel and appurtenant facilities. Two flood control dikes are located on the northeast shore of the impoundment upstream of the dam.

The canal headgate house is a wooden structure on a granite block foundation, housing the 10 intake gates that control flow from the impoundment to the power canal. The manually-operated headgates are all steel construction, 5.5 feet wide by 8.5 feet high.

The power canal extends from the headgates to the penstock intake structure. The canal is approximately 340 feet long by 73 feet wide by 13 feet deep. The inner sidewalls are constructed of cut-granite. Sloped earthen embankments create the outer walls and the floor of the canal is concrete.

The canal leads to the penstock intake structure for the two operating and two abandoned penstocks. Adjacent to the trashracks on the upstream face of the intake is a cut-stone ice sluice that crosses beneath Red Bridge Road and discharges back into the Chicopee River. There is one cast iron drain gate, 3 feet wide by 2 feet high, operated by a lead screw mechanism. Two operable and two inoperable 13-foot-diameter, 100-foot-long steel penstocks lead underground to the powerhouse. The two inoperable penstocks were taken out of service in 1938.

The powerhouse is constructed of brick and cut stone. The original circa 1901 equipment included horizontal waterwheels and 40-cycle generators. The original waterwheels for Units No. 1 and No. 2 were retired in 1938. The powerhouse contains wells for the discontinued Units No. 1 and No. 2 at the northerly end and the operating Units No.3 and No. 4 at the southerly end of the structure. The project has a total installed capacity of 4.5 MW. The flows from the two operating units discharge through two tailrace bays into the tailrace canal. The tailrace canal runs 735 feet in a southerly direction to where the flow re-enters the Chicopee River.

The flood control dikes are situated adjacent to the northeast shore of the impoundment, approximately 1,500 feet upstream of the dam. The first of these (known as the Railroad Dike) is of earth construction and is approximately 60 feet wide at its base, 50 feet long and rises 10 feet. The second dike (known as the Alden Street Dike) is located approximately 650 feet north of the Railroad Dike and extends northeasterly for approximately
The project operates in a limited store-and-release mode and impounds a 185-acre reservoir. Reservoir fluctuations are limited to two feet, but the project owner voluntarily limits fluctuations to one foot. The project provides a minimum bypass flow of 237 cfs at the base of the spillway. This flow regime was developed in consultation with US Fish and Wildlife Service and the Massachusetts Division of Fisheries and Wildlife (MDFW) to support water quality and fisheries habitat.

Waters within the project reach are listed as ‘Alert Status’ for E. coli and mercury contamination in fish tissue upstream. Alert Status is used to identify any issues of interest the Massachusetts Department of Environmental Protection (MDEP) may have for a particular waterbody which helps focus/prioritize monitoring activities. MDEP has confirmed that the project is not responsible for the E. coli contamination and may be due to upstream combined sewer flows up and atmospheric deposition likely is the source of the mercury impairment.

The Chicopee River watershed is not currently the subject of migratory fish management efforts. American eel is the only migratory species found throughout the Chicopee River system. Downstream dams create a barrier to upstream passage for anadromous fish species. With the exception of American eel, it is unlikely that migratory species may be found in the project area. Additionally, the project was constructed well after the first dams were installed on the river, dating back to the late 1800s. Though not specifically designed for it, the minimum flow gate permits downstream passage for riverine fish and eels.

The project lands consist of 4 acres. This includes project structures, adjacent fields, and some forested lands. No lands of significant ecological value exist in the vicinity of the project. The project requires an erosion control plan should any land-disturbing/clearing activities be planned.

Threatened or endangered species potentially present in the project vicinity include the Northern long-eared bat which has the potential for habitat statewide. Consultation with MDFW indicated that none of the project areas are mapped as Priority or Estimated Habitat, thus the bat is not expected to be found in the project area.

The project is included in the National Register of Historic Places as a part of the Ludlow Village Historic District. Consultation with the State Historic Preservation Office must occur before any land-disturbing activities are performed or any modifications of the historic features of the project.

Recreational resources at the project include small boat access, picnic facilities, a hiking trail, and a canoe put-in below the powerhouse tailrace. These facilities are now overseen by the Massachusetts Department of Conservation and Recreation and the MDFW. Public access is provided free of charge.

2022: No material changes or compliance issues were identified. The project remains in compliance based on the annual review. The project filed a FERC license amendment request to change to run-of-river operations with reduced minimum flows in the bypassed reaches of all owned projects on the river. The changes were developed in consultation with resource agencies via a settlement agreement and revised agency terms and conditions. Flow changes were based on flow/habitat study results. FERC has not yet acted on the amendment.

This decision is preliminary pending the 30-day appeal window. Only those who commented on the initial application during the 60-day comment period are eligible to file an appeal. Such appeal needs to include an explanation as to how the Project does not meet the LIHI criteria. Appeal requests can be submitted by email to comments@lowimpacthydro.org with “Red Bridge  Hydroelectric Project” in the subject line, or by mail addressed to the Low Impact Hydropower Institute, 329 Massachusetts Ave, Suite 2, Lexington, MA 02420. All requests will be posted to the website.  The applicant will have an opportunity to respond and any response will also be posted. Requests must be received by 5 pm Eastern time on December 15, 2018.  The full application and reviewers report are available below.

If no appeal requests are received and the decision becomes final, the Certification term for the Red Bridge Project will be March 27, 2017 through March 26, 2022.

August 7, 2018: The Low Impact Hydropower Institute has received a complete application for a new term of Low Impact Certification for the Red Bridge Hydroelectric Project (LIHI # 96). The Project is located on the Chicopee River in central Massachusetts.

Comments that are directly tied to specific LIHI criteria (flows, water quality, fish passage, etc.) will be most helpful, but all comments will be considered.  Comments may be submitted to the Institute by e-mail at comments@lowimpacthydro.org with “Red Bridge Project Comments” in the subject line, or by mail addressed to the Low Impact Hydropower Institute, 329 Massachusetts Avenue, Suite 2, Lexington, MA 02420.  Comments must be received at the Institute on or before 5 pm Eastern time on October 6, 2018 to be considered.  All comments will be posted to the web site and the applicant will have an opportunity to respond.  Any response will also be posted.

June 14, 2018:  The Red Bridge Hydroelectric Project has been granted an extension of the current certificate term. The new expiration date is November 30, 2018.

December 26, 2017: The Red Bridge Hydroelectric Project has been granted an extension of the current certificate term. The new expiration date is June 30, 2018.

March 1, 2017: The Red Bridge Hydroelectric Project has been granted an extension of the current certificate term. The new expiration date is November 30, 2017.

March 27, 2012: Essential Power LLC has submitted an application for the certification of the Red Bridge Project. Public comment period has been opened.