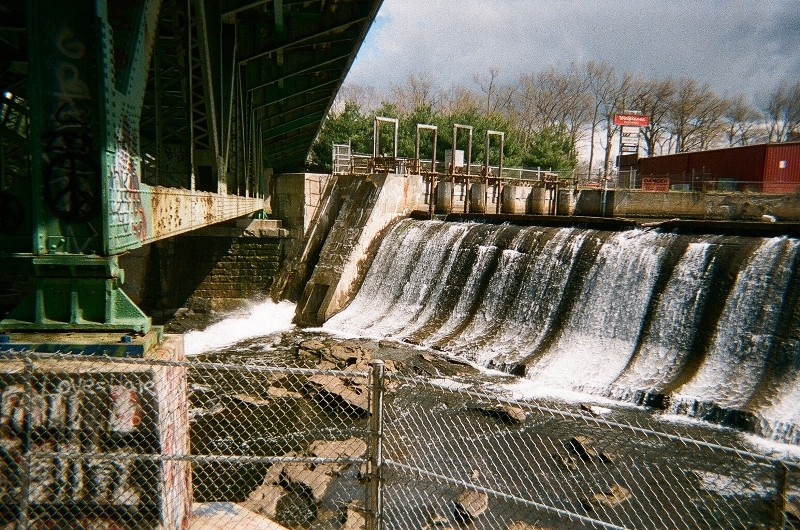 The Putts Bridge project is situated upstream of three other hydroelectric facilities located on the Chicopee River and downstream of two other dams on the Chicopee River as well as other dams on the Ware, Swift and Quaboag Rivers. The two upstream projects are Collins (LIHI #88), and Red Bridge (LIHI #96). Downstream are Indian Orchard (LIHI #112), Chicopee Falls (FERC No. 6522), and Dwight (LIHI #170).
The project includes a dam, concrete headgate structure, two conduits, forebay, trashrack, intake structure, a powerhouse with two generating units, a tailrace channel, appurtenant facilities.

The dam crosses the Chicopee River in a roughly north-to-south direction, and is a concrete gravity structure approximately 223 feet long by 22 feet high. The northern abutment of the dam is contiguous with the abutment for the Ludlow Avenue Bridge. Adjacent to this abutment are a skimming gate and a deep sluice gate. A 23-foot-long non-overflow section extends from the gate area to the 200-foot-long ogee spillway which extends across the river to the south abutment. A concrete retaining wall extends from the south abutment for approximately 133 feet. The dam creates a 1,700-foot-long bypassed reach.

The concrete headgate structure is adjacent to the northeast abutment of the dam. Six motorized headgates, each approximately 12 feet wide by 13.3 feet high direct flow to a double-barreled, underground concrete conduit that extends 647 feet from the impoundment to the forebay. Each barrel of the conduit is 16.5 feet high by 12.5 feet wide.

The forebay is a reinforced concrete structure measuring 40 feet wide by 104 feet long. The forebay is 41.5 feet high, with a 2.5-foot diameter spigot type drain gate at the base, and an 18-foot-wide skimming gate on the north forebay. The trashrack is situated along the western forebay wall, extending from the floor of the forebay. There is a mechanical trash rake mounted on rails along the entire width of the trashrack. Wooden headgates, measuring 14.3 feet square, isolate the forebay from the generating units.

The powerhouse has a concrete substructure with a brick superstructure. It houses two operating units, No.2 and No.3, and one retired unit, No. 4. Unit No.1 was never installed although the turbine pit is there. Unit No.5 is a retired waterwheel exciter. The project has a combined capacity of 3.9 MW. The tailrace canal runs 355 feet from the powerhouse in a westerly direction to where the flow re-enters the Chicopee River.

The project operates in a store-and-release mode and impounds a 65-acre reservoir. The project provides a 25 cfs minimum flow to the bypass reach and restricts drawdowns to 1 foot daily. This flow regime was approved after studies were conducted in conjunction with US Fish and Wildlife Service, Massachusetts Division of Fisheries and Wildlife, and Massachusetts Department of Environmental Protection (MDEP). The studies concluded that the flow regime provided adequate downstream flows, water quality, and aquatic habitat.

Waters within the project reach are designated as Class B and testing in the impoundment found impairments for pathogens due to combined sewer overflows upstream of the project. The bypass reach was found to exceed Class B parameters for dissolved oxygen and water temperature based on the studies mentioned above. MDEP confirms that the project does not cause or contribute to any adverse water quality conditions.

The Chicopee River watershed is not currently the subject of migratory fish management efforts and downstream dams block access; however, American eel is found throughout the Chicopee River system. Resident fish species include bluegill, pickerel, bass, sunfish, sucker, and many more. Though not designed for fish passage, the minimum flow gate can pass riverine fish downstream over the dam.

The project lands consist of roughly 4 acres. The shoreline consists primarily of shrub and forested wetland but lie outside the project boundary. No lands of significant ecological value are found within the project area.

No threatened or endangered species are potentially present in the project vicinity. Though the Northern long-eared bat has the potential to exist statewide, the project does not contain any critical habitat for the species and the urban environment is unlikely to support roosting trees.

The project itself is eligible for listing on the National Register of Historic Places. Consultation with the State Historic Preservation Office is required before conducting any construction activity with potential to modify existing historic facilities.

Recreational resources at the project include an informal boat ramp and fishing access on the east side of the impoundment. Public access is provided free of charge.

Condition 2: Should the Facility Owner determine that ground disturbance or significant changes in project operations are desired during the term of this LIHI Certification that could affect habitat for the swamp dock, the Facility Owner shall conduct studies and filings deemed necessary by the state to determine impacts to swamp dock that may occur in the Project area. LIHI shall be provided copies of agency communications (e.g. approvals, denials, mitigation measures, etc.) associated with such desired Project changes. This information should be submitted as part of the LIHI annual compliance statements.

August 8, 2019: The decision to recertify the Putts Bridge Hydroelectric Project is final. No appeals were received during the appeal period which closed on July 19, 2019. The new certification term for the Project is from December 20, 2017 through December 19, 2022.

June 19, 2019: The Low Impact Hydropower Institute has preliminarily approved Low Impact Certification for the Putts Bridge Hydroelectric Project. This decision is preliminary pending the 30-day appeal window. Only those who commented on the initial application during the 60-day comment period are eligible to file an appeal. Such appeal needs to include an explanation as to how the Project does not meet the LIHI criteria. Appeal requests can be submitted by email to comments@lowimpacthydro.org with “Putts Bridge Hydroelectric Project” in the subject line, or by mail addressed to the Low Impact Hydropower Institute, 329 Massachusetts Ave, Suite 6, Lexington, MA 02420. All requests will be posted to the website.  The applicant will have an opportunity to respond and any response will also be posted. Requests must be received by 5 pm Eastern time on July 19, 2019.  The full application and reviewers report are available below. If no appeal requests are received and the decision becomes final, the Certification term for the Project will be December 20, 2017 for a five (5) year term which will expire on December 19, 2022.

April 8, 2019: The Low Impact Hydropower Institute has received a complete application for Low Impact Recertification of the Putts Bridge Hydroelectric Project.  LIHI is seeking public comment on this application.  Specifically, we are interested in knowing whether you think the Project meets the LIHI Low Impact Certification Criteria, as revised in the 2nd Edition Handbook.  Please review the program and criteria in LIHI’s revised Handbook and then review the Project’s application materials below. Comments that are directly tied to specific LIHI criteria (flows, water quality, fish passage, etc.) will be most helpful, but all comments will be considered.  Comments may be submitted to the Institute by e-mail at comments@lowimpacthydro.org with “Putts Bridge Project Comments” in the subject line, or by mail addressed to the Low Impact Hydropower Institute, 329 Massachusetts Avenue, Suite 6, Lexington, MA 02420.  Comments must be received on or before 5 pm Eastern time on June 7, 2019 to be considered.  All comments will be posted to the web site and the applicant will have an opportunity to respond.  Any response will also be posted.

March 12, 2013: The Putts Bridge Hydroelectric Project has been certified as low impact for a five year term, effective December 20, 2012 and expiring December 20, 2017, with the following conditions:

February 18, 2013: The public comment period on application has closed.

December 20, 2012: Essential Power LLC has submitted an application for the certification of the Putts Bridge project. Application has been posted and the public comment period has opened.