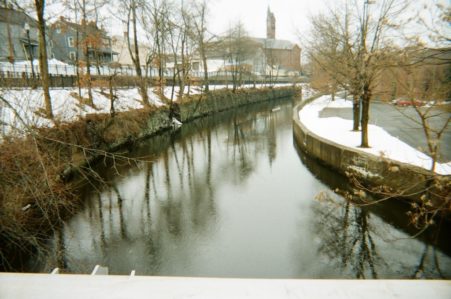 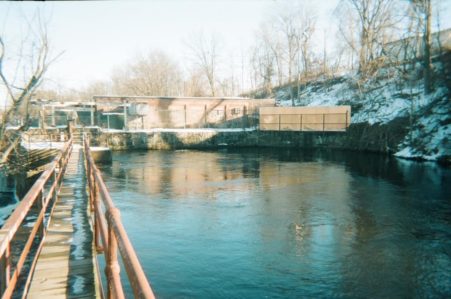 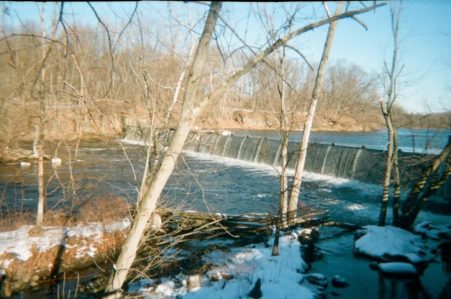 The Dwight Project is located on the Chicopee River in the City of Chicopee, Hampden County, Massachusetts. Most of the facilities at the project were built in the mid-1800s as part of the Dwight Manufacturing Company. The Company consisted of several buildings associated with mill operations. An original dam, at the location of the existing dam, along with several buildings, the power canal, several bridges and penstock gates were constructed in 1832 at the Dwight Company complex. At that time, the complex included hydromechanical units. The current Dwight dam was constructed in 1856. The powerhouse was built in 1920 to contain three turbines-generator units that replaced the existing hydromechanical units.

The project is the most downstream dam of six hydroelectric facilities on the Chicopee River which discharges to the Connecticut River about 1.2 miles downstream. The other five facilities are, moving upstream: Chicopee Falls (FERC No. 6522), Indian Orchard (LIHI #112), Putts Bridge (LIHI #102), Collins (LIHI #88), and Red Bridge (LIHI #96).

The dam, which was built ca. 1860, and consists of a 306-foot-long spillway and abutments. The northern abutment is constructed of cut stone and measures approximately 12 feet by 25 feet. The stone masonry overflow spillway is 15 feet high by 306 feet long, with a permanent crest elevation of 77.0 feet. The southern abutment is also constructed of cut stone, measures approximately 9 feet by 23 feet, and also serves as the north abutment of the headgate house. The dam creates and impoundment extending approximately 1,500 feet upstream with a surface area is approximately 32 acres.The canal headgate house is a brick structure on a concrete foundation, housing the six intake gates that control the flow from the impoundment to the power canal. The southern abutment of the canal headgate house is constructed of cut granite. The six head gates are all of timber construction, 5.5 feet-high by 8-feet wide. Each gate is equipped with a motor-driven rack and pinion operator.

The 80-foot-wide power canal extends 1,500 feet from the headgates to the penstock intake structure. The power canal extends another 1,500 feet further downstream where historically other industrial water users on the canal diverted the water from the downstream end of the canal. The south wall of the canal is of concrete and masonry construction while the north wall is formed from masonry and rock ledge. The canal is about 6 to 8-feet deep during normal operation. The intake structure is constructed of concrete and measures approximately 69 feet by 22 feet. Steel trashracks span 54 feet of the north wall of the canal, across the three operable penstocks. A rail-mounted trash rake traverses the intake. Three float-activated, wooden, 8-foot-diameter gates are operated by rack-and-pinion operators. Three operable penstocks lead through a manufacturing complex to the existing units at the Project. The steel penstocks are 7 feet in diameter and 168 feet long.

The powerhouse was built in 1920 to contain three turbines-generator units that replaced the existing hydromechanical units at the site. The powerhouse was shut down in 1973, pending extensive repairs and was rehabilitated in 1980. It was shut down again in September 2013 and not returned to full-time service until December 2016. The powerhouse contains three S. Morgan Smith turbines with a total installed capacity of 1.464 MW.

The intake structure is constructed of concrete and measures approximately 69 feet by 22 feet. Steel trashracks span 54 feet of the north wall of the canal, across the three operable penstocks. A rail-mounted trash rake traverses the intake. Three float-activated, wooden, 8-feet-diameter gates are operated by rack-and-pinion operators. Three operable penstocks lead through a manufacturing complex to the existing units at the Project. The steel penstocks are 7 feet in diameter and 168 feet long.

The project operates in run-of-river mode and impounds a 32-acre reservoir. A continuous minimum flow of 258 cfs is provided into the bypass reach to prevent any adverse impact on fish and wildlife resources in the area. The flow regime was developed using methods established by the US Fish and Wildlife Service Aquatic Base Flow policies.

Waters within the project reach are designated as Class B warm-water fisheries. The waters are also listed as impaired for E. coli though the likely cause of this impairment is wet weather combined with sewer overflows upstream of the project. Consultation with the Massachusetts Department of Environmental Protection confirmed that the project does not cause or contribute to any adverse water quality standards.

The Chicopee River watershed is not currently the subject of migratory fish management efforts. American eel is the only migratory species found throughout the Chicopee River system. Consultation with the Massachusetts Division of Fisheries and Wildlife (MDFW) concluded that upstream eel passage should be installed at the project as it is the first dam on the river. MDFW also recommended that downstream passage be installed consisting of full depth ¾-inch clear-space trashracks at the unit intakes and adequate downstream passage around the dam. Interim measures when deemed necessary would include unit shutdowns on rainy nights, and for the next two days from dusk to dawn during the downstream migration season (8/15-11/15) until long-term measures are installed.

The project lands consist of roughly 50 acres. Most of this land is comprised of deciduous forest with some emergent wetlands. The area within and immediately surrounding the project is an urban and industrial developed area with the forest lands creating a narrow, forested buffer around the impoundment. Due to the highly developed nature of the area, no lands of significant ecological value exist in the project area. Further, no critical habitats for any endangered or threatened species exists in the project area. Consultation with the Natural Heritage and Endangered Species Program of the MDFW concluded that project operations would not impact the Northern long-eared bat, the only endangered species potentially in the project area.

Historic properties in the project area include many of the project facilities originally constructed in the mid-1800s as part of the Dwight Manufacturing company. The original dam, power canal, several bridges, and penstock gates were part of the complex and are eligible for listing on the National Register of Historic Places. Additionally, the Ames Manufacturing Company complex of former mill buildings, now the eastern section of the project, was designated a National Register Historic Individual Property in 1983.

The project does not have any recreational amenities due to private land ownership one must cross to gain access to the project. A short walking path runs near the project and is currently slated to be extended. The impoundment is relatively shallow and unsupportive of boating activities. However, public access is provided free of charge if passage is allowed across private property.

2022: No material changes or compliance issues were identified. The project remains in compliance based on the annual review. The project filed a FERC license amendment request to change to run-of-river operations with reduced minimum flows in the bypassed reaches of all owned projects on the river. The changes were developed in consultation with resource agencies via a settlement agreement and revised agency terms and conditions. Flow changes were based on flow/habitat study results. FERC has not yet acted on the amendment. For Condition 1, the project reported contacting USFWS again in March 2022 but still no response. For Condition 2, the project reported that an MOA with the MA SHPO is being drafted to mitigate for switchgear replacement and photo-documentation had been completed in 2021. For Condition 3, the project reported the City had been contacted again in March 2022 with no response.

This decision is preliminary pending the 30-day appeal window. Only those who commented on the initial application during the 60-day comment period are eligible to file an appeal. Such appeal needs to include an explanation as to how the Project does not meet the LIHI criteria. Appeal requests can be submitted by email to comments@lowimpacthydro.org with “Dwight Project” in the subject line, or by mail addressed to the Low Impact Hydropower Institute, 329 Massachusetts Ave, Suite 6, Lexington, MA 02420. All requests will be posted to the website. The applicant will have an opportunity to respond and any response will also be posted. Requests must be received by 5 pm Eastern time on September 20, 2020. The full application and reviewer’s report are available below.

If no appeal requests are received and the decision becomes final, the Certification term for the Project will be April 3,2020 through April 2, 2025.

Comments that are directly tied to specific LIHI criteria (flows, water quality, fish passage, etc.) will be most helpful, but all comments will be considered.  Comments may be submitted to the Institute by e-mail at comments@lowimpacthydro.org with “Dwight Project Comments” in the subject line, or by mail addressed to the Low Impact Hydropower Institute, 329 Massachusetts Avenue, Suite 6, Lexington, MA 02420.  Comments must be received on or before 5 pm Eastern time on June 12, 2020 to be considered.  All comments will be posted to the web site and the applicant will have an opportunity to respond.  Any response will also be posted.