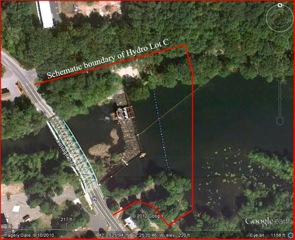 The Collins Project is located on the Chicopee River between Ludlow and Wilbraham, MA. The project is an example of constructive reuse of a low-head, breached mill dam. The dam was formerly used by the Collins Manufacturing Company, formed in 1872 to produce writing paper.

The project is one of six dams on the Chicopee River used for hydroelectric power production. Upstream of the project is the Red Bridge Project (LIHI #96) and downstream are the Putts Bridge (LIHI #102), Indian Orchard (LIHI #112), Chicopee Falls (FERC No. 6522), and Dwight (LIHI #170) Projects.

The site was hard to permit because houses were built in the flood plain upstream after the original timber crib dam was breached in 1979. However, by using the existing forebay as an additional spillway on the right side of the river and also designing three 4-foot-high sections of hinged flashboards that are lowered during floods, the site was approved by the local conservation commission, the state dam safety agency and by federal fish environmental agencies.

The current dam is a 300-foot-long, 11-foot-high reinforced concrete structure fitted with 3-foot flashboards on the spillway and the main dam section containing hinged Bascule gates. The project uses a portion of the pre-existing power canal 1,100 feet long, varying in width from 40 to 90 feet, and flanked by a 270-foot-long spillway section. The rest of the former power canal has been filled starting at a point just upstream of the Miller Street/Cottage Street bridge. The two turbine/generator units are set in the breached section of the dam and have a combined capacity of 1.3 MW. The generating units are integral to the dam so there is no bypassed reach.

The facility uses two ESAC bulb turbines designed and built in France. The advantage of the bulb turbine is that it is submersed under water requiring no powerhouse. Controls and switchgear are located in a small building well above the river flood levels and therefore the full crest length of the dam is available to spill water in case of flood flows. This technology is ideal for this application because:

The ESAC equipment was delivered pre-assembled and aligned in the bulbs so no powerhouse is required, and installation time was 20% of the conventional powerhouse; the bulbs can be lifted in and out with a crane and anchored inexpensively into the dam structure without reducing the dam’s crest length required to pass floods; the ESAC full Kaplan turbine is very efficient over the full range of flows found in the Chicopee River, operating on a float control following the discharge rates of the Red Bridge powerplant located a mile upstream.

Turbine flow discharges into the plunge pool located directly downstream of the dam. The project does not bypass any portion of the Chicopee River and is required to release 332 cfs or inflow to the plunge pool.

The project operates in a run-of-river mode and impounds a 72-acre reservoir. The project provides a 332 cfs minimum flow as required by the US Fish and Wildlife Service New England Flow Policy. The project limits impoundment fluctuations to 4 inches to further ensure protection of aquatic resources and habitat.

Waters within the project reach are designated Category 2 (attaining some uses, other uses not assessed). Massachusetts Department of Environmental Protection (MDEP) has further characterized the water quality as good: fully supportive of aquatic life, primary and secondary recreation, and aesthetic uses. This designation was based on sampling results from testing done by MDEP.

The Chicopee River watershed is not currently the subject of migratory fish management efforts. American eel is the only migratory species found throughout the Chicopee River system. Upstream fish passage at the project is prevented by downstream dams. However, despite the presence of these dams, American eel have been reported upstream of the project. While passage facilities have not been prescribed by resources agencies, the project owner has implemented nightly shutdowns on rainy nights from August 15 through November 15 to facilitate the passage of American eels.

The project lands consist of roughly one acre. The project has limited ownership over any watershed lands. No lands of significant ecological value exist in the project area due to the small footprint of the project. For the same reason, no threatened or endangered species are found in the project vicinity.

Upon consultation with the State Historic Preservation Office, it was determined that there are no cultural or historic resources in the project area.

Recreational resources at the project include a canoe portage, fishing access, and a boat ramp. Public access is provided free of charge where safe. Reservoir usage is discouraged due to the presence of a natural gas pipeline and storage facility.

2019: For Condition 2, the project documented installation of railings, signage and stone steps for the portage. The project reported no change in status for Conditions 3 and 4. The project remains in compliance based on the annual review.

The certification term will be 5-years unless optional Condition 4 is carried out and accepted by LIHI in which case an additional three years will be added. The term will therefore be March 3, 2017 through March 3, 2022.

As provided for in Section 4.2.5 of the LIHI 2nd Edition, the Preliminary Certification Decision to certify, along with the Application Reviewer’s report and (if prepared) report of the Executive Director, will be posted on the Institute’s Web page for 30 days.  Notice of the posting will be provided to all individuals or organizations that commented on the initial Application Package.

Any Commenter or the owner may submit a letter to the Executive Director requesting an appeal within the 30-day period.  The appeal request must state specific reasons why the hydropower facility should have failed one or more criteria.  If an individual or organization did not comment on the initial Application Package, they may not file an appeal.  If the Owner feels the decision is unwarranted or the conditions contained in the decision cannot be complied with, the Owner can submit a letter requesting an appeal. Further information about the LIHI appeal process is available in the LIHI Handbook, available at https://lowimpacthydro.org/certification-program-html/.  Any request for an appeal must be received by close of business on September 10, 2017.

If no appeal is requested within the 30-day period, the Executive Director will issue LIHI Certification for the facility and post a notification of certification on the Institute’s website.  Once final, the effective certification date for the Collins Hydroelectric Project is March 3, 2017 for a five (5) year term, which will expire on March 3, 2022.

April 25, 2017:  LIHI has received a complete application for a new term of Low Impact Certification for the Collins Hydroelectric project.  LIHI is seeking public comment on this application.  Specifically, we are interested in knowing whether you think the Collins project meets the LIHI Low Impact Certification Criteria, as revised in the 2nd Edition Handbook released in March 2016.  Please review the program and criteria in LIHI’s revised Handbook and then review the Project’s 2016 application materials posted on the project page.

Comments that are directly tied to specific LIHI criteria (flows, water quality, fish passage, etc.) will be most helpful, but all comments will be considered.  Comments may be submitted to the Institute by e-mail at comments@lowimpacthydro.org with “Collins Project Comments” in the subject line, or by mail addressed to the Low Impact Hydropower Institute, PO Box 194, Harrington Park, New Jersey 07640.  Comments must be received at the Institute on or before 5 pm Eastern time on June 24, 2017 to be considered.  All comments will be posted to the web site and the applicant will have an opportunity to respond.  Any response will also be posted.

March 27, 2012: The Swift River Company has submitted an application for certification of the Collins Hydroelectric Project. Public comment period on the application has been opened for 60 days.