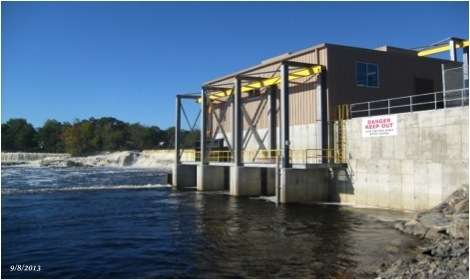 The Stillwater Project is located on the Stillwater Branch of the Penobscot River in the town of Stillwater in Penobscot County, Maine. The project is located at a former logging and milling site, near the City of Old Town. The site was developed into an operating hydroelectric facility in 1902 by the Orono Pulp and Paper Company. A second powerhouse (now Powerhouse A) was constructed on the south side of the dam in 1932, and by 1942, the original powerhouse was abandoned, with the remains still visible on the southeast portion of the dam. Powerhouse B was constructed in 2013. The new downstream fish passage facility and eel ladder began operations in 2014 and 2016, respectively.

The Stillwater hydroelectric project is a component of the Penobscot River Restoration Agreement. The overall intent of the Agreement is to provide enhancements to the Penobscot River’s environmental resources, and lower and minimize the influence of the Owner’s hydroelectric projects on those resources while maintaining the levels of renewable hydropower generation from the river. The restoration effort is one of the largest river restoration projects in our nation’s history. In an unprecedented collaboration, a diverse group of stakeholders worked together to restore 11 species of sea-run fish to the Penobscot River, while maintaining energy production.

The project operates in a run-of-river mode and impounds a 191-acre reservoir. The project provides a minimum flow of 70 cfs in the east channel and 1-2 cfs in the west channel. These flows promote bypass reach habitat for migratory and resident species and to enhance upstream eel passage. This flow regime was developed as part of the Settlement Agreement with consultation from the parties involved including Maine Department of Environmental Protection and the Penobscot Indian Nation.

Waters within the project reach are designated Class B, suited for fish propagation and survival, as well as primary contact recreation. The Stillwater Branch of the Penobscot River is not listed for any impairments. The project owner conducted water quality monitoring following the construction of Powerhouse B which indicated that project operations are not adversely impacting water quality in the river reach.

There is no upstream passage for anadromous fish since fish collected at the Orono fish lift are trapped and trucked to a location upstream on the mainstem Penobscot Rive. This is because it was determined to be more beneficial for overall fish restoration of the river basin to concentrate the upstream passage in the Penobscot River mainstem.

The Project does have upstream eel passage via a permanent, flow-through concrete channel which is approximately 6 ft wide and 36 ft long with a bristle-brush floor and provides a 1.5-cfs conveyance flow seasonally. It is located at the small bedrock island about mid-river of the spillway, not far from Powerhouse B. The original eel ladder at Powerhouse A was removed when the current one was installed. This upstream eel passage ladder is operated at a minimum from June 1 to August 31 annually.

The Powerhouse A downstream fish bypass facility is located at the left side of the intake (looking downstream) between the forebay wall and 1-inch clear space trashracks and consists of a low-level entrance and a surface entrance both of which flow into a 2.83-foot-wide bypass flume that discharges into the tailwater through a 36-inch-diameter conduit pipe. Subject to suitable river conditions, the Powerhouse A fish bypass is operated from April 1 to December 31 annually, with a total combined flow of 70 cfs. From April 1 to August 15, the flow is provided entirely through the surface entrance. From August 15 to November 15, the flow is balanced with a 40/30 cfs split between the surface entrance and low-level entrance to enhance downstream eel passage. The flow then reverts back to surface entrance flow only from November 15 to December 31 (or ice-in of the headpond).

Powerhouse B also has1-inch clear space angled trashracks to minimize fish entrainment, and a downstream fish passage facility consisting of a combination of an opening in the flashboards in the forebay near the trashracks (for 2 weeks during the downstream Atlantic salmon smolt migration) and a 4-foot-wide fish bypass opening in the forebay wall. A 4-foot square downstream eel passage facility is installed at the base of the trashracks. Both fish bypasses discharge to a plunge pool that empties into a flume which runs along the west side of the powerhouse to the tailrace. Subject to suitable river conditions, the Powerhouse B fish bypass is operated from April 1 to December 31 annually with a total combined flow of 70 cfs. From April 1 to August 15, the flow is provided entirely through the surface entrance. From August 15 to November 15, the flow is balanced with a 40/30 cfs split between the surface entrance and low-level entrance to enhance downstream eel passage; operation of the fish bypass then reverts back to surface entrance flow only from November 15 to December 31 (or ice-in of the headpond). The double-regulated unit nearest the downstream fish passage facility at Powerhouse B is operated as first on and last off to provide attraction to the downstream fish passage.

The project lands consist of 4.7 acres. Lands under project ownership are limited to those housing project facilities, with no control of nearby shoreline. No lands of significant ecological value exist in the limited project boundary.

Threatened or endangered species potentially present in the project vicinity include Atlantic salmon, yellow lampmussel, brook floater, tidewater mucket, Northern long-eared bat, little brown bat, eastern small-footed bat, big brown bat, red bat, hoary bat, silver-haired bat, tri-colored bat, and several rare plant species. Ongoing efforts to restore river connectivity for the listed aquatic species have yet to confirm the effectiveness of the passage facilities at the project. The facilities are not likely to adversely impact these species, but effectiveness of passage is still under review. The mussel species are not expected to be impacted by normal run-of-river operations. Similarly, the bat species are not likely to be impacted as limited shoreline management activities occur. The project has committed to adhering to the US Fish and Wildlife Service 4(d) rule concerning bat roosting site protection should any construction or tree-cutting occur at the site. Consultation with the Maine Natural Areas Program (MNAP) identified the presence of several state plant Species of Special Concern, in the project area. The species has been previously observed in the area and led to the development of a Sensitive Plant Protection Plan. The plan has helped to preserve critical habitat for the species and MNAP has stated it has no concerns related to project impacts on the species.

Recreational resources at the project include a canoe portage trail. Public access is provided free of charge.

This decision is preliminary pending the 30-day appeal window. Only those who commented on the initial application during the 60-day comment period are eligible to file an appeal. Such appeal needs to include an explanation as to how the Project does not meet the LIHI criteria. Appeal requests can be submitted by email to comments@lowimpacthydro.org with “Stillwater Project” in the subject line, or by mail addressed to the Low Impact Hydropower Institute, 1167 Massachusetts Ave, Arlington MA 02476. All requests will be posted to the website. The applicant will have an opportunity to respond and any response will also be posted. Requests must be received by 5 pm Eastern time on April 17, 2021. The full application and reviewer’s report is available below.

If no appeal requests are received and the decision becomes final, the Certification term for the Project will be June 1, 2020 through May 31, 2025.

LIHI is seeking public comment on this application. Comments that are directly tied to specific LIHI criteria (flows, water quality, fish passage, etc.) will be most helpful, but all comments will be considered. Comments may be submitted to the Institute by e-mail at comments@lowimpacthydro.org with “Stillwater Project Comments” in the subject line, or by mail addressed to the Low Impact Hydropower Institute, 1167 Massachusetts Avenue, Arlington MA 02476. Comments must be received on or before 5 pm Eastern time on January 30, 2021 to be considered. All comments will be posted to the web site and the applicant will have an opportunity to respond. Any response will also be posted.

Any Commenter may submit a letter to the Executive Director requesting an appeal within the 30-day period, which begins on January 20, 2017 and ends on February 20, 2017.  The appeal request must state specific reasons why the hydropower facility should have failed one or more criteria.  Only individuals or organizations that commented on the initial Application Package may file an appeal.  Further information about the LIHI appeal process is available in the LIHI Handbook, available at https://lowimpacthydro.org/certification-program-html/.

If no appeal is requested within the 30-day period, the Executive Director will issue LIHI Certification for the facility and post a notification of certification on the Institute’s website.  Once final, the effective certification date for the Stillwater Project is June 1, 2015 for a five (5) year term, which will expire on June 1, 2020.

December 11, 2015: The Low Impact Hydropower Institute has received a complete application for a new term of Low Impact Certification for the Stillwater Hydroelectric project.  The application materials can be found in the Files section below.

The public comment period for this application closed on February 12, 2016.

August 2, 2010: The public comment period for the application for certification has been closed.

June 2, 2010: Black Bear Hydro Partners has submitted an application for the certification of the Stillwater Project. Public comment period will be open for 60 days.