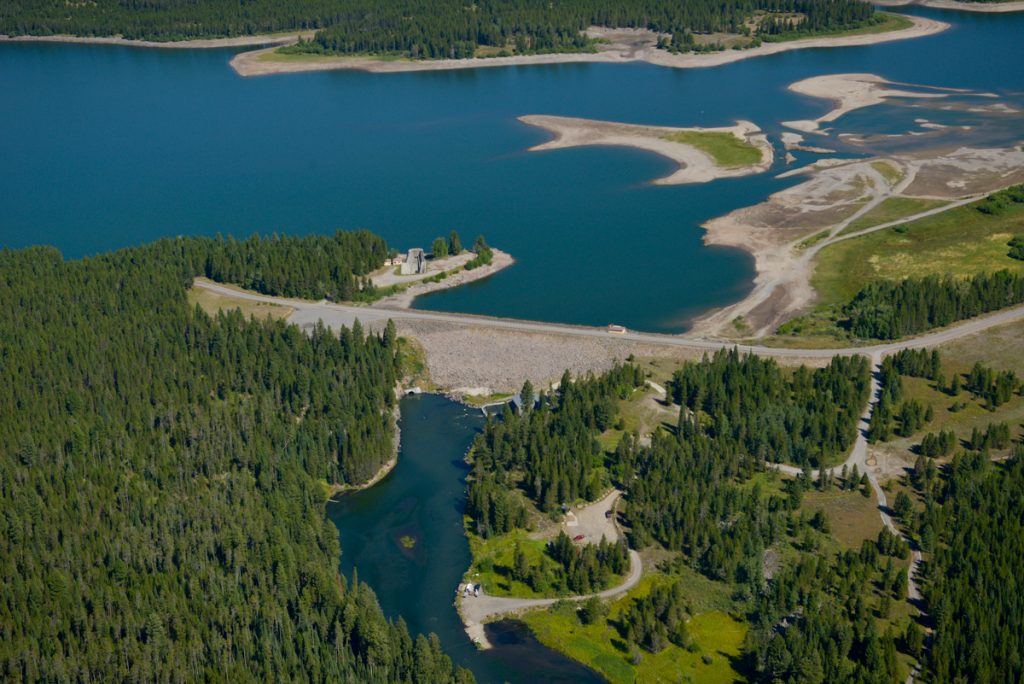 The project operates as a diversion project and is located at an USBR dam which impounds the 8,084-acre Island Park reservoir. The dam and reservoir are not a feature of the project. Because the USBR has complete control over releases from the dam, the Project does not have a required minimum flow. The project does target ramping rate flow releases of 30 cfs – 35 cfs per half-hour and releases no greater than 50 cfs per half-hour. This flow regime was developed via recommendation from the Idaho Department of Fish and Game.

Waters within the project reach are designated as Category 3, Unassessed Waters, in the reservoir and downstream river segment. The project area is managed to support aquatic life, specifically cold-water communities, as well as for primary contact recreation, domestic water supply, and salmonid spawning. An aeration facility ensures dissolved oxygen concentrations are enhanced as they pass through the project. This facility retains water for two minutes at peak flows and adds 25,000 pounds of oxygen into the water daily.

In the 1930s, construction of the Buffalo River Dam blocked upstream passage to the Buffalo River. Additionally, there are natural barriers downstream on the Snake River which have historically blocked diadromous fish access to the project area. The Henrys Fork supports populations of rainbow trout, brook trout, mountain whitefish, and several non-game species. The project implemented intake screening which limits the migration of reservoir fish into the downstream cold-water fishery.

The project lands consist of 1.2 acres, owned by the US Forest Service (USFS). As the project area is under federal ownership (USFW or USBR), the project does not have any control or land management obligations in terms of the reservoir shoreline.

Threatened or endangered species potentially present in the project vicinity include the grizzly bear, Canada lynx, and Ute ladies’ tresses orchid. Idaho Department of Fish and Game (IDFG) has confirmed that these species have been noted in the project vicinity, though the orchid species only roughly 25 miles from the project. A grizzly bear recovery plan has been implemented and project operations do not interfere with this plan. Via consultation with IDFG and USFWS, the project does not adversely impact any of the listed species.

No cultural or historic resources have been identified in the project area. The Island Park Dam is potentially eligible for listing on the National Register of Historic Places for its contribution to the historic development of northeastern Idaho. The State Historic Preservation Office has concluded that the hydro project does not impact cultural or historic resources in the project area though consultation is required should the project plan any land clearing or earth-disturbing activities in the future.

Recreational resources at the project include a boat launch, a fishing platform, and a hiking trail. These facilities are inspected annually by the USFS as a part of its special use permit the project operates under. Public access is provided free of charge.

Condition 1: The facility Owner shall include a discussion of ramping rate measurement and reporting at annual stakeholder meetings and shall provide to LIHI in annual compliance statements a summary of the annual meeting and any stakeholder comments and/or concerns on ramping rates.  Should FERC require additional ramping rate deviation reporting or modifications to the existing ramping rate plan during the LIHI Certification term, the facility Owner shall provide to LIHI all related correspondence and a copy of any FERC-approved revised plan within 60 days of its approval.

Condition 2: In its annual compliance reports, the facility Owner shall provide an update on the temporary five-year Dissolved Oxygen limit test program, scheduled to be completed in October 2024. The intent of this temporary program is to rectify the differences between state water quality standards and FERC License requirements. Should this program result in permanent adoption of new DO levels, the Owner shall submit FERC’s documentation modifying these requirements, and both FERC’s and USFS’s approval of the revised Plan that requires this approval. LIHI reserves the right to review the certification and/or modify or add conditions based on the final outcome of this matter.

2022: No material changes or significant compliance issues were identified.  The project remains in compliance based on the annual review. One short term dissolved oxygen deviation due to aeration equipment malfunction was reported to FERC. For Conditions 1 and 2, the project provided documentation of stakeholder satisfaction with current operations.

July 8, 2022: The Low Impact Hydropower Institute has issued a final decision on the recertification of the Island Park Project.  The 30-day appeal window closed on July 2, 2022 and no appeals were filed.  Therefore, the decision to recertify the project is now final.  The new term is December 29, 2021 through December 28, 2031 in accordance with the term extension that became effective January 1, 2022 in Revision 2.05 of the LIHI 2nd Edition Certification Handbook.

June 2, 2022: The Low Impact Hydropower Institute (LIHI) has preliminarily approved the Island Park Project for a new 10-year term of Low Impact Certification. This decision is preliminary pending the 30-day appeal window. Only those who commented on the initial application during the 60-day comment period are eligible to file an appeal. Such appeal needs to include an explanation as to how the Project does not meet the LIHI criteria. Appeal requests can be submitted by email to comments@lowimpacthydro.org with “Island Park Project” in the subject line, or by mail addressed to the Low Impact Hydropower Institute, 1167 Massachusetts Ave, Office 407, Arlington, MA 02476. All requests will be posted to the website. The applicant will have an opportunity to respond and any response will also be posted. Requests must be received by 5 pm Eastern time on July 2, 2022. The full application and reviewer’s report are available below. If no appeal requests are received and the decision becomes final, the Certification term for the Project will be December 29, 2021 through December 28, 2031.

January 4, 2022: The Low Impact Hydropower Institute (LIHI) has received a complete recertification application from Fall River Rural Electric Cooperative for the Island Park Project. LIHI is seeking comment on this application. Comments that are directly tied to specific LIHI criteria (flows, water quality, fish passage, etc.) will be most helpful, but all comments will be considered. Comments may be submitted to LIHI by e-mail at comments@lowimpacthydro.org with “Island Park Project Comments” in the subject line, or by mail addressed to the Low Impact Hydropower Institute, 1167 Massachusetts Avenue, Office 407, Arlington, MA 02476. Comments must be received at the Institute on or before 5 pm Eastern time on March 5, 2022 to be considered. All comments will be posted to the web site and the applicant will have an opportunity to respond. Any response will also be posted. The complete application can be found below.

January 29, 2018: The appeal period for the Preliminary Decision to Certify the Island Park hydroelectric project has closed with no requests to appeal. The decision is therefore final. Island Park is LIHI Certificate #2.

As provided for in the LIHI Certification Handbook, the preliminary decision will be followed by a 30-day period to appeal the decision. Appeal requests may be submitted by those who provided comments during the application’s 60-day public comment period. Any appeal must include specific reasons why the appellant believes the hydropower facility does not meet one or more criteria. Appeal requests can be submitted by email to comments@lowimpacthydro.org with “Island Park Hydroelectric Project” in the subject line, or by mail addressed to The Low Impact Hydropower Institute, 329 Massachusetts Ave, Suite 2, Lexington, MA 02420.  All requests will be posted to this website and the applicant will have an opportunity to respond. Any response will also be posted. Requests must be received by 5pm EST on January 26, 2018. More details on the appeal process can be found in our handbook HERE.

LIHI is seeking public comment on this application. Specifically, we are interested in knowing whether you think the Island Park project meets the LIHI Low Impact Certification Criteria. The Island Park application is subject to review using the Criteria in the LIHI Certification Handbook of 2014.  Please review the program and criteria in LIHI’s 2014 Handbook and then review the Project’s 2016 application materials posted on the project page. Comments that are directly tied to specific LIHI criteria (flows, water quality, fish passage, etc.) will be most helpful, but all comments will be considered. Comments may be submitted to the Institute by e-mail at comments@lowimpacthydro.org with “Island Park Project Comments” in the subject line, or by mail addressed to the Low Impact Hydropower Institute, PO Box 194, Harrington Park, New Jersey 07640. The 60 day public comment period begins on January 3, 2017.  Comments must be received at the Institute on or before 5 pm Eastern time on March 4, 2017 to be considered. All comments will be posted to the web site and the applicant will have an opportunity to respond.  Any response will also be posted.

2011: The Island Park project was first certified as low impact by LIHI as Certificate No. 2 on June 7, 2001 for a two year term, ending on June 7, 2003. The certification was extended in 2003 when LIHI extended certification terms from two years to five years in duration. It was certified again for a five year term from June 24, 2006 to June 24, 2011. The facility opted not to be recertified in 2011.