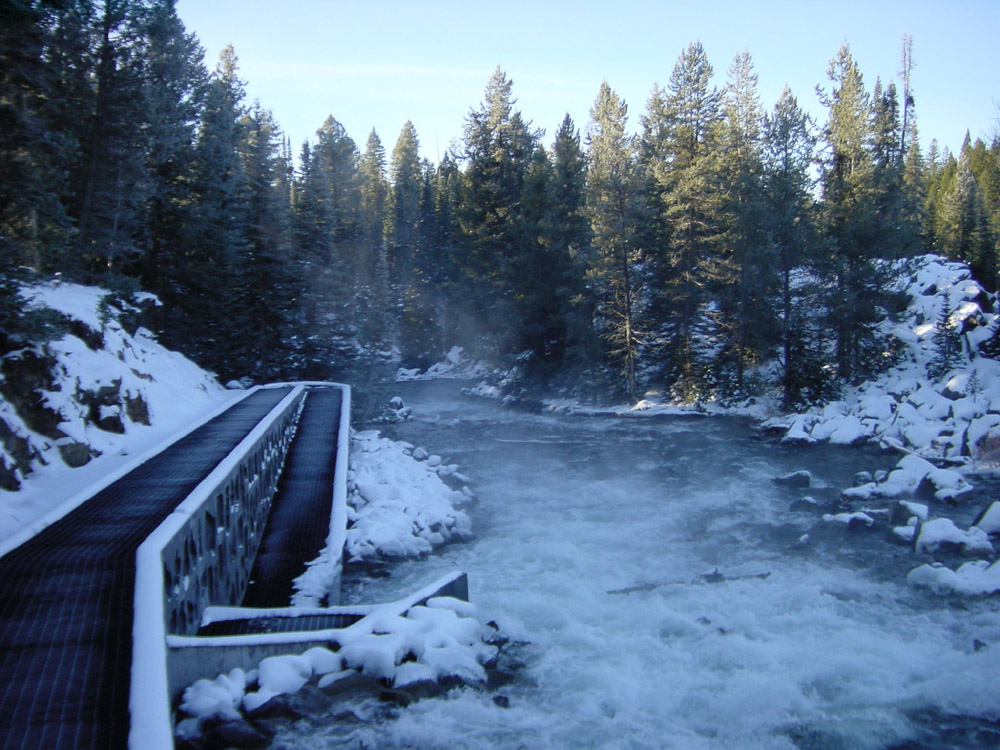 The Project is located within the Targhee National Forest north of Ashton, in Fremont County, Idaho. The Buffalo River Project is the only dam located on the Buffalo River. The dam was built in 1936 to generate hydroelectric power for the construction of US Bureau of Reclamation’s Island Park Dam (LIHI #2) and Reservoir, part of the Minidoka Project, which provides water to irrigate farmland in Idaho’s Snake River Plain. The facility was subsequently acquired by Ponds Lodge, a resort lodge located upstream on the Buffalo River in Island Park. It provided power for the lodge until the powerhouse was struck by lightning and burned in 1986. Buffalo Hydro, Inc. acquired a new license for the project in 1989 and rebuilt the powerhouse, resuming hydroelectric operation in 1994. In 1997, Buffalo Hydro, Inc. sold the project to the current owner, Fall River Rural Electric Cooperative Inc.

The dam is a 142-foot-long by 12-foot-high timber-faced rock-filled diversion dam with a 40-foot-long by 3-foot-high concrete slab spillway with stop logs. The concrete intake structure contains a 5-foot steel slide gate. The penstock is 52-foot-long by 5-foot-diameter concrete encased steel pipe. The intake structure includes fish screens and a mechanical screen cleaner having 0.25-inch openings. The fishway is 270-feet-long with a 45-degree angle. The masonry block powerhouse is equipped with a single Kaplan turbine with a capacity of 0.25 MW. The project includes an 1,800-foot-long underground transmission line.

The project operates in a run-of-river mode and impounds a 4.6-acre reservoir. The project diverts a fixed flow of 100 cfs from the Buffalo River year-round, creating a 660-foot bypassed reach. Inflow greater than 100 cfs is passed over the dam and spillway. Idaho Fish and Game has recommended that the project provide a base flow of at least 50 cfs to support the downstream reaches of the river.

In the 1930s, construction of the Buffalo River Dam blocked upstream fish passage to the Buffalo River, the only large tributary to the Henry’s Fork of the Snake River between Island Park Dam and Mesa Falls, two barriers that isolate this reach of Henry’s Fork. In 1996, a working group of the Henry’s Fork Watershed Council realized the goal of restoring fish migration from Henry’s Fork into the Buffalo River with the completion of a fish ladder at the Buffalo River dam, replacing the one built in the 1930s. The fish ladder was improved in 2006 to allow juvenile trout access to winter habitat and to increase the number of spawning trout migrating upstream in hopes of increasing recruitment to the Henry’s Fork fishery. The project operates a 270-foot-long fishway which provides upstream passage for rainbow trout. The project reach further supports brook trout, mountain whitefish, and several non-game species. Intake screening mitigates the possibility for entrainment in the penstock and maintains a maximum approach velocity of 0.8 feet per second. Diadromous fish migration has not historically occurred at the project due to the natural barriers downstream.

The project lands consist of less than one acre within the Targhee National Forest. The shoreline and surrounding lands are primarily federally owned, and the project does not have any control over land management. The project operates under a vegetation management plan which prescribes measures for the control and maintenance of invasive weeds in the project area as well as the reestablishment of native plant species in potentially disturbed areas to prevent soil erosion.

Threatened or endangered species potentially present in the project vicinity include the grizzly bear, Canada lynx, and Ute Ladies’ Tresses. Recovery plans have been developed and implemented for the Grizzly bear and Canada lynx. The Ute ladies’ tresses orchid recovery plan was never implemented. Idaho Fish and Game and USFWS have confirmed that the project’s run-of-river operations do not interfere with the recovery plans for the listed species.

No cultural or historic resources have been identified at the project. The project operates in compliance with the United States Geological Survey Heritage Resource Protection Plan which addresses cultural resource protection and mitigation in national forest lands. The project is required to notify the United States Forest Service and cease work if any cultural resources are identified.

Recreational resources at the project include hiking trails and associated signage. Public access is provided free of charge.

Condition partially satisfied in 2022. Condition 1: In the annual compliance statements, the Facility Owner shall update LIHI on the status of the transducer and staff gage installation project, and on the status of updates to the Operational Compliance Monitoring Plan to reflect the current procedures for monitoring stream flows. It is anticipated that this will be completed in 2023. Upon completion, LIHI shall be provided with a copy of FERC’s approval of the Plan.

2022: No material changes or compliance issues were identified. The project remains in compliance based on the annual review.  For Condition 1, the project reported completion of transducer and gage installation, thus partially satisfying the condition.

March 23, 2022: The Low Impact Hydropower Institute has issued a final decision on the recertification of the Buffalo River Project. The 30-day appeal window closed on March 18, 2022 and no appeals were filed. Therefore, the decision to recertify the project is now final. The new term is November 28, 2021 through November 27, 2031.

February 15, 2022: The Low Impact Hydropower Institute (LIHI) has preliminarily approved the Buffalo River Project for a new 10-year term of Low Impact Certification. The full application and reviewer’s report are available below.

This decision is preliminary pending the 30-day appeal window. Only those who commented on the initial application during the 60-day comment period are eligible to file an appeal. Such appeal needs to include an explanation as to how the Project does not meet the LIHI criteria. Appeal requests can be submitted by email to comments@lowimpacthydro.org with “Buffalo River Project” in the subject line, or by mail addressed to the Low Impact Hydropower Institute, 1167 Massachusetts Ave, Office 407, Arlington, MA 02476. All requests will be posted to the website. The applicant will have an opportunity to respond and any response will also be posted. Requests must be received by 5 pm Eastern time on March 18, 2022. If no appeal requests are received and the decision becomes final, the Certification term for the Project will be November 28, 2021 through November 27, 2031.

December 8, 2021: The Low Impact Hydropower Institute has received a complete recertification application from Fall River Rural Electric Cooperative for the Buffalo River Project. LIHI is seeking comment on this application. Comments that are directly tied to specific LIHI criteria (flows, water quality, fish passage, etc.) will be most helpful, but all comments will be considered. Comments may be submitted to LIHI by e-mail at comments@lowimpacthydro.org with “Buffalo River Project Comments” in the subject line, or by mail addressed to the Low Impact Hydropower Institute, 1167 Massachusetts Avenue, Office 407, Arlington, MA 02476. Comments must be received at the Institute on or before 5 pm Eastern time on February 6, 2022 to be considered. All comments will be posted to the web site and the applicant will have an opportunity to respond. Any response will also be posted. The complete application can be found below.

This application was processed under the 2014 edition of the LIHI Handbook because the application materials were received prior to 2016. As provided for in Section 2.14 of the LIHI 2014 Edition Handbook, the Preliminary Certification Decision was posted on the Institute’s website and sent to a stakeholder email distribution list on March 8, 2017. A 30-day period was provided to anyone who commented on the original application to request an appeal, and no requests for appeal were received.

November 28, 2016: On November 28, 2016, the Low Impact Hydropower Institute received a complete application from Fall River Rural Electric Cooperative, Inc., for the Low Impact Certification of the Buffalo River Hydroelectric Project in Idaho. The Buffalo River project was previously certified as low impact by LIHI for a five year from August 11, 2006 to August 11, 2011.  LIHI is seeking public comment on this application. Specifically, we are interested in knowing whether you think the Buffalo River project meets the LIHI Low Impact Certification Criteria. The Buffalo River application is subject to review using the Criteria in the LIHI Certification Handbook of 2014.  Comments that are directly tied to specific LIHI criteria (flows, water quality, fish passage, etc.) will be most helpful, but all comments will be considered. Comments may be submitted to the Institute by e-mail at comments@lowimpacthydro.org with “Buffalo River Project Comments” in the subject line, or by mail addressed to the Low Impact Hydropower Institute, PO Box 194, Harrington Park, New Jersey 07640. The 60 day public comment period begins on November 28, 2016. Comments must be received at the Institute on or before 5 pm Eastern time on January 27, 2016 to be considered. All comments will be posted to the web site and the applicant will have an opportunity to respond.  Any response will also be posted.