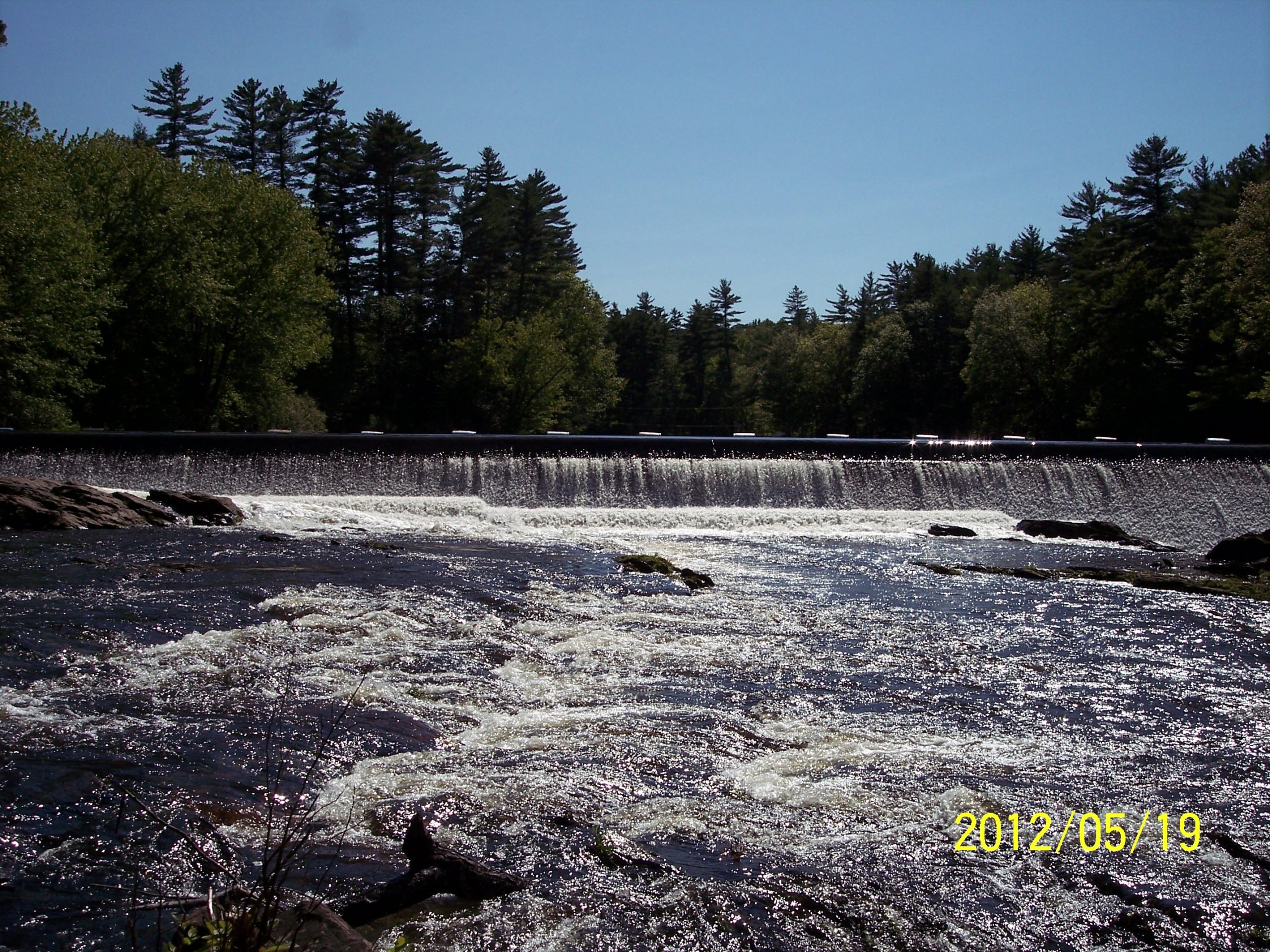 The Rolfe Canal Project is located on the Contoocook River in the City of Concord, New Hampshire. Construction of the hydroelectric project began in 1985 and was completed in 1987. The project area is located on the northern end of the city and utilizes the previously existing impoundment formed by the state-owned York Dam. Water is diverted from this impoundment to the Rolfe Canal, a canal that also existed prior to the construction of the hydroelectric project. The project is located immediately upstream of the Penacook Upper Falls (LIHI #52) and Penacook Lower Falls (LIHI #64) projects.

The Contoocook River rises on the eastern slopes of Mt. Monadnock in southeastern New Hampshire and ends at the confluence with the Merrimack River. The river is about 71 miles long and flows in a generally north-easterly direction through the towns of Jaffrey, Peterborough, Bennington, Antrim, Hillsboro, Henniker, and Contoocook to Concord. The river drops about 130 feet in elevation in its final 20 miles, thus explaining the development of numerous water-powered mills over the past two centuries. Its major tributaries, the Warner and Blackwater rivers, both enter from the north about two miles apart, near the village of Contoocook.

York dam is a 10-foot-high, 130-foot-long granite block dam with a gated concrete canal intake structure leading to a 7,000-foot-long, 75-foot-wide and 9-foot-deep power canal. The penstock intake structure is 130 feet long and made of concrete with a 900-foot-long, 14-foot diameter steel penstock which conveys water to a concrete powerhouse containing a single generating unit with an installed capacity of 4.285 MW. The tailrace is 47 feet wide and 350 feet long.

The canal banks consist of sections that are riprapped with stone in areas of high flow and earthen banks in the remaining sections. The tailrace banks immediately downstream of the powerhouse are stabilized with riprap. Other banks are earthen. There have been no observed areas of high erosion during the 24 years that the project has operated.

The penstock intake structure is located at the end of the canal that conveys water into a penstock that is connected to the Briar powerhouse. Water is returned from the powerhouse to the Contoocook River by the tailrace channel.

The project operates in a run-of-river mode and impounds a 5-acre reservoir. The dam creates a 0.45-mile-long bypass reach. The project provides a continuous minimum flow of 285 cfs as measured at the confluence of the Contoocook River and the outlet of Rolfe Canal. It also releases at least 5 cfs in the reach of the canal bypassed by the penstock and powerhouse. Flows in the bypass reach are maintained at 100 cfs. This flow regime was developed initially with resource agency input and was reevaluated and accepted in consultation with US Fish and Wildlife Service (USFWS) and the New Hampshire Department of Environmental Services (NHDES).

Waters within the project reach are designated as Category 3 in the impoundment and Category 5 in the bypass reach. Category 3 waters are those for which there is insufficient information upon which a determination of designated use can be made. A Category 5 designation indicates the river is impaired, in this case for aquatic life support due to pH impairment. Sampling conducted in 2012 in collaboration with NHDES concluded that the project is not adversely impacting pH, dissolved oxygen, phosphorous, and chlorophyll-a. Further sampling is planned to take place in 2021.

The Contoocook River is currently a focus for migration restoration efforts. Historically, anadromous fish including Atlantic salmon, American shad, and river herring once populated the Merrimack River basin. Migratory access was cut off in 1847 with the construction of Essex Dam in Lawrence, MA (LIHI #121). Several other dams between the project and Essex Dam further block migratory access. Recent efforts to provide upstream passage at the downstream dams have now triggered the downstream Hooksett Dam (LIHI #162) to install upstream fish passage which will then require passage facilities at the project. According to the New Hampshire Fish and Game Department (NHFG), the catadromous American eel has been found upstream of the project. Thus, the eel species has been able to find natural passage routes around the project. However, the project owner has been collaborating with USFWS and NHFG to provide temporary upstream eel passage routes and plans for permanent passage structures are currently being evaluated.

No upstream fish passage facilities are required. Triggers for requiring upstream passage have not yet been met.

Downstream fish passage is provided via the 50-cfs sluice gate at York Dam and the bypass pipe at the penstock intake structure. NHFG and USFWS support the use of these measures as NHFG stocks river herring in Contoocook River. Further measures and improvements are currently being examined with assistance from USFWS and NHGF.

PLUS-Standard (Optional): The owner shall provide updates to LIHI as part of the annual compliance statements on the status of the new downstream eel exclusion screen planned for 2018 installation. The updates should include a summary of activities during the prior year related to installation, post-installation testing, operational or structural changes planned or made as a result of testing; and any agency consultation, comments or acceptance of the installation once completed. The Owner can request the PLUS standard’s 3-year term extension up to six months in advance of the LIHI term expiration of December 3, 2022, and once the system has been tested and shown to be effective. At that time, LIHI will make a determination whether to award an extra 3 years of certification.

The project does not include any land abutting the impoundment, the bypassed reach, the inlet channel shoreline, nor the tailrace shoreline. As mentioned previously, no instances of high erosion have been observed during the existence of the project.

Threatened or endangered species potentially present in the project vicinity include the wood turtle, spotted turtle, Northern leopard frog, and rapids clubtail. In consultation with NHFG and the New Hampshire Natural Heritage Bureau, the project has been found to have no impact on the listed species.

The project dam, York Dam, is eligible for listing on the National Register of Historic Places. The dam is not owned by the project but the project owner must consult with the New Hampshire Division of Historical Resources in the event of any project modifications. No construction activities are currently planned that would affect historic resources.

Recreational resources at the project include a boat launch owned by the city of Concord. A large tract of forested land is located immediately downstream of the project and has been identified as a potential area for a park. The area is primarily used for hiking and angling access.

Condition partially satisfied in 2022. Condition 1: LIHI shall be provided a copy of the report submitted to NHDES on the results of the planned 2018 water quality studies along with the Owner’s interpretation of compliance with state standards. This LIHI submittal shall be within three months of completion of the testing and can be included with the applicable annual compliance statement if the timing aligns. A copy of NHDES’s response to the testing results shall also be forwarded to LIHI within 30 days of receipt from NHDES.

Condition 2 (optional): To support the requested PLUS standard for downstream passage, the Owner shall provide updates to LIHI as part of the annual compliance statements on the status of the new downstream eel exclusion screen planned for 2018 installation.  The updates should include a summary of activities during the prior year related to installation, post-installation testing, operational or structural changes planned or made as a result of testing; and any agency consultation, comments or acceptance of the installation once completed. The Owner can request the PLUS standard’s 3-year term extension up to six months in advance of the LIHI term expiration of December 3, 2022, and once the system has been tested and shown to be effective.  At that time, LIHI will make a determination whether to award an extra 3 years of certification.

2019: There were no reported changes or compliance issues. The project remains in compliance based on the annual review. The project began FERC relicensing with filing of the PAD on 11/30/2019. For Condition 1, the project reported additional water quality monitoring would be conducted as part of relicensing. For Condition 2, the project reported the eel screen was tested with limited success due to debris clogging, with modifications planned and that nightly turbine shutdowns were initiated instead.

June 19, 2018: The 30-day appeal window for the preliminary recertification decision of the Rolfe Canal Hydroelectric Project closed on June 14, 2018 with no appeals to the decision received. The decision is therefore final and the Rolfe Canal Hydroelectric Project is recertified for a 5-year term from December 4, 2017 through December 3, 2022, with an opportunity to extend the term to December 3, 2025.

May 15, 2018: On May 14, 2018, the Rolfe Canal Hydroelectric project has received preliminary approval for a new 5-year term of Low Impact Certification. This decision is preliminary pending the 30-day appeal window. Only those who commented in the initial application 60-day comment period are eligible to file an appeal. Such appeal needs to include an explanation as to how the project does not meet the LIHI criteria. Appeal requests can be submitted by email to comments@lowimpacthydro.org with “Rolfe Canal Hydroelectric Project” in the subject line, or by mail addressed to the Low Impact Hydropower Institute, 329 Massachusetts Ave, Suite 2, Lexington, MA 02420. All requests will be posted to the website and the applicant will have an opportunity to respond and any response will also be posted. Requests must be received by 5 pm Eastern time on June 14, 2018.  The full application and reviewers report are available at the bottom of this page. If no appeal requests are received and the decision becomes final, the new term for the Rolfe Canal Project will be December 4, 2017 through December 3, 2022.  If the PLUS standard is granted, the new term will expire on December 3, 2025.

August 31, 2017: On August 30, 2017, the Low Impact Hydropower Institute (LIHI) received a complete application from the Rolfe Canal Hydroelectric Project for the Low Impact Recertification of the Rolfe Canal Hydroelectric project, FERC No. 3240, located on the Contoocook River in the City of Concord, New Hampshire. LIHI is seeking public comment on this application.  Specifically, we are interested in knowing whether you think the Rolfe Canal Hydroelectric project meets the LIHI Low Impact Certification Criteria, as revised in the 2nd Edition Handbook released in March 2016.  Please review the program and criteria in LIHI’s revised Handbook and then review the Project’s 2016 application materials posted on the project page. Comments that are directly tied to specific LIHI criteria (flows, water quality, fish passage, etc.) will be most helpful, but all comments will be considered.  Comments may be submitted to the Institute by e-mail at comments@lowimpacthydro.org with “Rolfe Canal Project Comments” in the subject line, or by mail addressed to the Low Impact Hydropower Institute, 329 Massachusetts Avenue, Suite 2, Lexington, MA, 02420.  Comments must be received at the Institute on or before 5 pm Eastern time on October 31, 2017 to be considered.  All comments will be posted to the web site and the applicant will have an opportunity to respond.  Any response will also be posted.

December 4, 2012: Briar Hydro Associates has submitted an application for the certification of its Rolfe Canal Hydroelectric Project. The application was posted and the public comment period was opened.