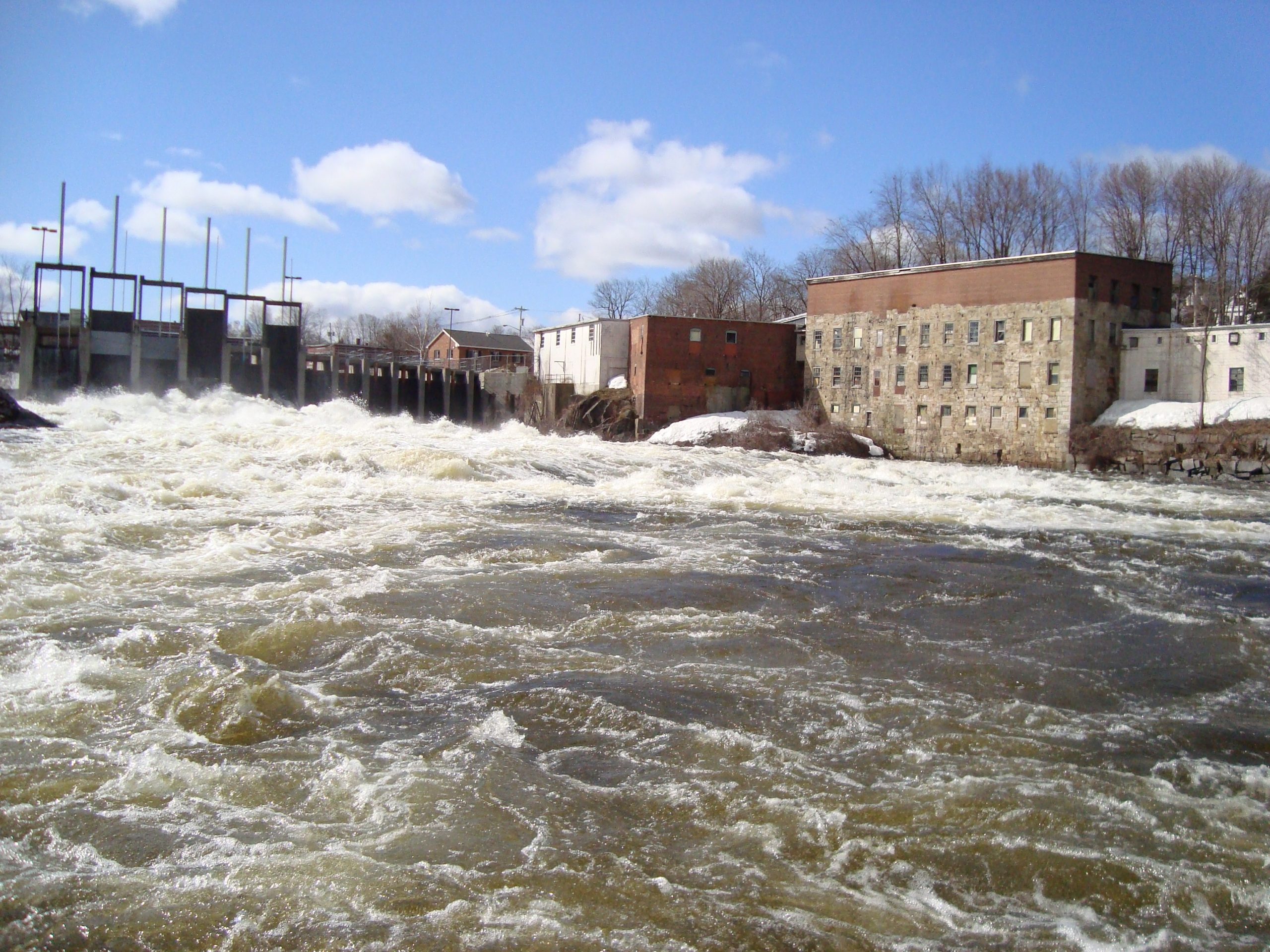 The Penacook Upper Falls Project is located on the lower Contoocook River in Merrimack County in the southeastern New Hampshire Village of Penacook. The Village of Penacook is made up of a small part of the Town of Boscawen and the northern end of the City of Concord. The project is located on the extreme northern end of Concord, with a section of the tailrace crossing into Boscawen. The Contoocook River rises on the eastern slopes of Mt. Monadnock in southeastern New Hampshire and ends at the confluence with the Merrimack River. The river is about 71 miles long and flows in a generally north-easterly direction through the towns of Jaffrey, Peterborough, Bennington, Antrim, Hillsboro, Henniker, and Contoocook to Concord. The river drops about 130 feet in elevation in its final 20 miles, thus explaining the development of numerous water-powered mills over the past two centuries. Its major tributaries, the Warner and Blackwater Rivers, both enter from the north, about two miles apart, near the village of Contoocook.

The project was constructed in 1984 – 1986. The project is the second dam upstream from the Contoocook River’s confluence with the Merrimack River. The Penacook Lower Falls Project (LIHI #64) is located downstream of the project and the York Dam (owned by the State of NH and part of the Rolfe Canal Project (LIHI #104) as well as numerous other dams upstream including the US Army Corps of Engineers’ Hopkinton flood control dam.
The project includes a dam, spillway, powerhouse, tailrace, and a generating unit.

The dam is a 21‐foot high, 187-foot-long timber stoplog dam with a spillway built on the remains of an existing dam. There are 16 gates in the 187-foot-long concreted spillway, 6 operable timber gates, 9.5 feet wide and 15.5 feet high; 8 fixed timber stopgate logs, and two operable ice gates, 12 feet wide and 3.5 feet high; a powerhouse at the east side of the dam with one Allis Chalmers horizontal shaft tube turbine with a capacity of 3.02 MW; and a tailrace, 47 feet wide and 350 feet long.

The riverbanks upstream and downstream of the powerhouse are contained by concrete retaining walls to bedrock. A 15‐foot-long forebay with a 58‐foot average width begins at the powerhouse and extends upstream.

The project operates in a run-of-river mode and impounds an 11.4-acre reservoir. The project provides a minimum continuous flow of 338 cfs below the tailrace to mitigate impacts to fish and other aquatic wildlife. The flow regime was recommended by US Fish and Wildlife Service (USFWS) and was monitored by New Hampshire Department of Environmental Services (NHDES). The project owner provided NHDES with flow monitoring reports annually until 2016 when NHDES confirmed that the project need only report any flow deviations, of which there have been none.

Waters within the project reach are designated as Class B waters that are managed for protection and propagation of fish, shellfish, and wildlife, and for primary and secondary contact recreation. The project owner has monitored water quality in the area and tested for dissolved oxygen, water temperature, total phosphorus, and chlorophyll-a. The data collected concluded that the project is meeting water quality standards as confirmed by NHDES.

This section of the Contoocook River is scheduled for restoration of anadromous species as deemed appropriate by the US Department of the Interior. Upstream fish passage is facilitated by an experimental eel ladder installed in 2017, able to pass roughly 3,000-4,000 American eel annually. This passage measure was installed in collaboration with USFWS and New Hampshire Fish and Game (NHFG). Permanent upstream passage for other species will be constructed once a minimum of 15,000 American Shad pass upstream through the downstream Garvins Falls Project on the Merrimack River.

Downstream fish passage is facilitated by an opening in the gate bay. It releases a constant 40 cfs channeled into a flume that discharges into the tailrace. A current inducer directs fish toward the passage and away from the turbine intake. Resident fish species include brown bullhead, common shiner, common sunfish, common white sucker, fallfish, largemouth bass, longnose dace, margined madtom, redbreast sunfish, and smallmouth bass. River herring are also stocked in the river by NHFG.

The project lands consist of roughly four acres located within a heavily developed area in the center of Boscawen. Surrounding lands are primarily commercially developed and one of the banks is heavily sloped and vegetated. No lands of significant ecological value exist in the project area due to its small footprint and developed location. The project owner has assisted the City of Concord in constructing a river walk and provided funds to the Penacook Downtown River Park to assist in its construction.

No cultural or historic properties exist in the project area. The project owner consults with the State Historic Preservation Office prior to any land disturbing activities or construction. No material changes have been made or are planned for the project.

2022: No material changes or compliance issues were identified. The project remains in compliance based on the annual review.  For Condition 1, the project reported filing the FERC Draft License Application on July 15, 2022 with the final application due by November 30, 2022.

2021: There were no reported changes or compliance issues. The project remains in compliance based on the annual review.  For Condition 1, the project reported relicensing studies were in progress.

2020: There was one reported change and no reported compliance issues.  The project remains in compliance based on the annual review. For Condition 1, the project reported on relicensing status with study requests received.  For optional Condition 2, the project confirmed installation of upstream American eel passage thus satisfying the PLUS standard.

August 27, 2021: In accordance with optional Condition 2 below, the facility implemented upstream eel passage at the Project in 2020, in advance of a new FERC license and therefore the extended term is granted.

April 15, 2020: The decision to recertify the Penacook Upper Falls Project is now final. The Certification term is from September 25, 2019 – September 24, 2024 with an option to extend the term by three years.

April 10, 2020:  LIHI sent a response letter to the appeal requestor. The letter can be found below under 2019-2020 Recertification Files.

April 3, 2020: One letter requesting an appeal of the preliminary decision were received on April 3, 2020. The letter can be found below under 2019-2020 Recertification Files.

March 5, 2020: The Low Impact Hydropower Institute has preliminarily approved Low Impact Recertification for the Penacook Upper Falls Hydroelectric Project, LIHI #52.This decision is preliminary pending the 30-day appeal window. Only those who commented on the initial application during the 60-day comment period are eligible to file an appeal. Such appeal needs to include an explanation as to how the Project does not meet the LIHI criteria. Appeal requests can be submitted by email to comments@lowimpacthydro.org with “Penacook Upper Falls Hydroelectric Project” in the subject line, or by mail addressed to the Low Impact Hydropower Institute, 329 Massachusetts Ave, Suite 6, Lexington, MA 02420. All requests will be posted to the website.  The applicant will have an opportunity to respond and any response will also be posted. Requests must be received by 5 pm Eastern time on April 4, 2020.  The full application and reviewers report are available below. If no appeal requests are received and the decision becomes final, the Certification term for the Project will be from September 25, 2019 to September 24, 2024, with the option to extend the term until September 24, 2027.

November 26, 2019: The Low Impact Hydropower Institute has received a complete application for Low Impact Recertification of the Penacook Upper Falls Hydroelectric Project.  LIHI is seeking public comment on this application.  Specifically, we are interested in knowing whether you think the Project meets the LIHI Low Impact Certification Criteria, as revised in the 2nd Edition Handbook.  Please review the program and criteria in LIHI’s revised Handbook and then review the Project’s application materials below. Comments that are directly tied to specific LIHI criteria (flows, water quality, fish passage, etc.) will be most helpful, but all comments will be considered.  Comments may be submitted to the Institute by e-mail at comments@lowimpacthydro.org with “Penacook Upper Falls Project Comments” in the subject line, or by mail addressed to the Low Impact Hydropower Institute, 329 Massachusetts Avenue, Suite 6, Lexington, MA 02420.  Comments must be received on or before 5 pm Eastern time on January 25, 2020 to be considered.  All comments will be posted to the web site and the applicant will have an opportunity to respond.  Any response will also be posted.

August 5, 2016: LIHI Executive Director, Michael J. Sale, using authority delegated from the LIHI Governing Board, has certified that the Penacook Upper Falls Hydroelectric Project (FERC No. P-6689) satisfies the LIHI Certification Criteria. A Preliminary Decision was announced on June 17, 2016, and a 30-day appeal period was open through July 17, 2016. No requests for appeal were received. This Certification Decision includes two facility-specific conditions, as follows:

October 30, 2015: The Low Impact Hydropower Institute has received a complete application for a new term of Low Impact Certification for the Penacook Upper Falls Hydroelectric project.  The application materials can be found in the Files section below.

April 21, 2010: The Penacook Upper Falls Hydroelectric Project has been certified as low impact for a five year term, effective September 25, 2009 and expiring September 25, 2014.

September 25, 2009: Briar Hydro Associates has submitted an application for certification of the Penacook Upper Falls Hydroelectric Project. A public comment period will remain open for 60 days.