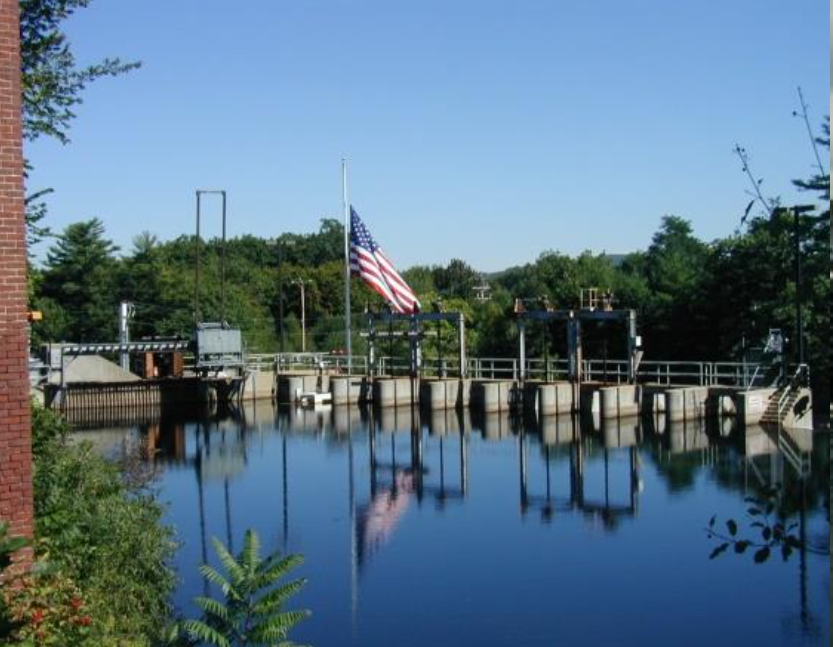 The Penacook Lower Falls Project is located on the Contoocook River in the Village of Penacook which is made up of a small part of the Town of Boscawen and the northern end of the City of Concord. New Hampshire. The project first began operation in 1984 when facility construction was completed. The Contoocook River rises on the eastern slopes of Mt. Monadnock in southeastern New Hampshire and ends at the confluence with the Merrimack River in Concord. The river is about 71 miles long and flows in a generally north-easterly direction through the towns of Jaffrey, Peterborough, Bennington, Antrim, Hillsboro, Henniker, and Contoocook to Concord. The river drops about 130 feet in elevation in its final 20 miles, thus explaining the development of numerous water-powered mills over the past two centuries. Its major tributaries, the Warner and Blackwater Rivers, both enter from the north, about two miles apart, near the village of Contoocook. The project is located downstream of the Rolfe Canal Project (LIHI #104) which includes York Dam owned by the State of NH and the Penacook Upper Falls Project (LIHI #52), as well as numerous other dams upstream including the US Army Corps of Engineers’ Hopkinton flood control dam.

Project works include a concrete diversion spillway with three 9.5-foot by 10-foot-high timber gates and seven timber stoplog gates; a concrete gravity auxiliary spillway 316 feet long and a main concrete spillway, gated and 106 feet long; a forebay 70 feet long; a concrete powerhouse containing a single horizontal tube-type turbine/generating unit with an installed capacity of 4,110 kW; and a tailrace excavated in rock 700 feet long. The powerhouse is constructed to bedrock on the same alignment as the centerline of the river profile.
The project operates in a run-of-river mode and impounds an 8.4-acre reservoir. The project provides a continuous minimum flow of 338 cfs into the 680-foot-long bypassed reach. This flow regime was developed with recommendations from the US Department of the Interior to protect resident and migratory aquatic biota.

Waters within the project reach are designated as being fully supportive of water quality parameters including dissolved oxygen, total phosphorus, and chlorophyll-a. The impoundment is listed as impaired due to pH which is likely due to atmospheric deposition (acid rain) and is not caused by project operations. These findings are the result of water quality sampling conducted with and reviewed by the New Hampshire Department of Environmental Services (NHDES).

Migratory fish passage is currently not available at dams upstream and downstream of the project. Fish restoration programs are currently underway for the Merrimack River basin, specifically targeting American shad populations. When 15,000 American shad individuals pass Hooksett Dam on the Merrimack River, the next upstream dam, Garvin’s Falls, will begin planning for upstream passage facilities. The project owner has been actively engaging with US Fish and Wildlife Service and New Hampshire Department of Fish and Game to evaluate upstream and downstream fish passage resources. Downstream passage is currently provided by a 40-cfs flow-through pipe locate in a gated concrete spillway. This passage is operated from May 1st through June 30th each year as prescribed by USFWS. All three projects on the lower Contoocook River are owned by the same company and all three shutdown operations for three nights in a row following periods of one quarter inch of rain.

The project lands consist of roughly 4 acres. The project is located in a developed area near the center of the Village of Penacook surrounded by a mix of residential and commercial developments. The riverbanks are vegetated, though some areas narrowly so. Due to the project’s small footprint and developed nature, there are no lands of significant ecological value in the project area.

Consultation with the New Hampshire Division of Historical Resources has confirmed that no cultural or historic resources are located within the project area. Downstream of the project is the Hannah Duston Monument, the first publicly funded statue in New Hampshire. This site is potentially eligible for listing on the National Register of Historic Places. Project operations do not cause any adverse impact on the site.

Recreational resources at the project include a boat launch and fishing access. Public access is provided free of charge.

2022: No material changes or compliance issues were identified. The project remains in compliance based on the annual review.  For Condition 1, the project reported filing draft study reports with NHDES and plans to file the draft license application in July 2022, with the final application due by November 30, 2022.

November 4, 2021: The Low Impact Hydropower Institute has issued a final decision on the recertification of the Penacook Lower Falls Project. The 30-day appeal window closed on October 31, 2021 and no appeals were filed. Therefore, the decision to recertify the project is now final. The new term is August 13, 2020 through August 12, 2025.

October 1, 2021: The Low Impact Hydropower Institute (LIHI) has preliminarily approved the Penacook Lower Falls Project for a 5-year term of Low Impact Certification.  This decision is preliminary pending the 30-day appeal window. Only those who commented on the initial application during the 60-day comment period are eligible to file an appeal. Such appeal needs to include an explanation as to how the Project does not meet the LIHI criteria. Appeal requests can be submitted by email to comments@lowimpacthydro.org with “Penacook Lower Falls Project” in the subject line, or by mail addressed to the Low Impact Hydropower Institute, 1167 Massachusetts Ave, Office 407, Arlington, MA 02476. All requests will be posted to the website. The applicant will have an opportunity to respond and any response will also be posted. Requests must be received by 5 pm Eastern time on October 31, 2021. The full application and reviewer’s report are available below. If no appeal requests are received and the decision becomes final, the Certification term for the Project will be August 13, 2020 through August 12, 2025.

July 16, 2021: The Low Impact Hydropower Institute (LIHI) has received a complete recertification application from Briar Hydro Associates for the Penacook Lower Falls Project located on the Contoocook River in New Hampshire. LIHI is seeking comment on this application. Comments that are directly tied to specific LIHI criteria (flows, water quality, fish passage, etc.) will be most helpful, but all comments will be considered. Comments may be submitted to LIHI by e-mail at comments@lowimpacthydro.org with “Penacook Lower Falls Project Comments” in the subject line, or by mail addressed to the Low Impact Hydropower Institute, 1167 Massachusetts Avenue, Office 407, Arlington, MA 02476. Comments must be received at the Institute on or before 5 pm Eastern time on September 14, 2021 to be considered. All comments will be posted to the web site and the applicant will have an opportunity to respond. Any response will also be posted. The complete application can be found below.

August 5, 2016: LIHI Executive Director, Michael J. Sale, using authority delegated from the LIHI Governing Board, has certified that the Penacook Lower Hydroelectric Project (FERC No. P-3342) satisfies the LIHI Certification Criteria. A Preliminary Decision was announced on June 17, 2016, and a 30-day appeal period was open through July 17, 2016. No requests for appeal were received. This Certification Decision includes two facility-specific conditions, as follows:

The effective certification date for the Penacook Lower Falls Project is August 13, 2015 for a five (5) year term, which will expire on August 13, 2020.

October 30, 2015: The Low Impact Hydropower Institute has received a complete application for a new term of Low Impact Certification for the Penacook Lower Falls Hydroelectric project.  The application materials can be found in the Files section below.

June 19, 2015: The Penacook Lower Falls Hydroelectric project has been granted an extension of the current certificate term. The new expiration date is December 31, 2015.

January 29, 2011: The Penacook Lower Falls Hydroelectric project has been certified as low impact for a five year term, effective August 13, 2010 and expiring August 13, 2015.

October 13, 2010: Public comment period on the application for certification has been closed.

August 13, 2010: Briar Hydro Associates has submitted an application for certification of the Penacook Lower Falls Hydroelectric Project. A public comment period will remain open for 60 days.