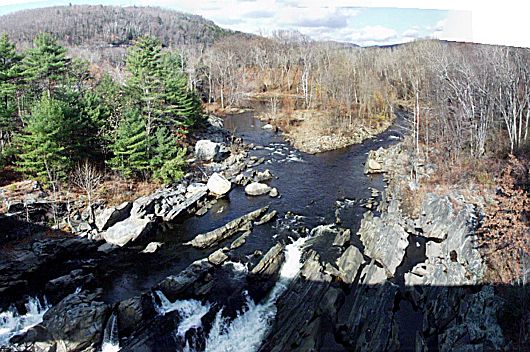 The Woronoco Project is located on the Westfield River in the town of Russel, Hampden County, in southwestern Massachusetts. The Westfield River is approximately 78.1 miles long, from its headwaters in the Berkshires (i.e., the Green Mountains) in northwestern Massachusetts, to its confluence with the Connecticut River. One dam lies downstream of the project and three upstream. The closest upstream dam is the Knightville Dam, a flood control structure owned by the US Army Corps of Engineers. Further upstream are Crescent Dam and Indian River Dam. The West Springfield Dam (LIHI #19) is the only dam downstream of the project.

The original dam built at the site of the existing Woronoco Project was a timber-crib structure constructed in 1879. The existing hydro station was completed in 1913 to supply power to two paper mills, located along the banks of the Westfield River. The original timber crib dam was later replaced by the project’s two existing dams which were constructed in 1938 (North Dam) and1950 (South Dam).

The project’s principal features consist of two non-contiguous 25-foot-tall concrete-gravity dam sections (North Dam, 307 feet long; and South Dam, 315 feet long) and a 655-foot-long earthen dike. An intake leads to a powerhouse, which contains three Francis turbine/generator units with a combined capacity of 2.7 MW. The project has a downstream fish passage facility (with its discharge at the base of the south dam) and an upstream American eel passage facility. The bypassed reach has three channels, varying in length from 200 to 1,000 feet. There are no flashboards, spillway, or crest control gates at the Project.

The project operates in a run-of-river mode and impounds a 43-acre reservoir. Run-of-river operations are maintained via use of two electronic pressure transducers and a Programmable Logic Controller. The project provides a minimum flow 57 cfs into the separate channels of the bypass reach to ensure protection of water quality, fisheries, and aquatic resources in the.

Waters within the project reach are designated as Class B Warmwater Fishery and Recreation waters. Run-of-river operations and flow requirements were designed to protect and enhance these use designations. A water quality study conducted near the project showed that water quality standards were met for temperature, but low for alkalinity. The project was noted as not the cause of that impairment which is naturally occurring.

Historically, Atlantic salmon were present in the Westfield River and restoration efforts were undertaken until the restoration program ended. The project owner previously supported the program financially. The project provides passage for the catadromous American eel via two eel ladders at the two dams. Downstream passage is provided for American eel and riverine species. Downstream fish protection on the trashracks includes ¾-inch clear spaced panels installed during fish passage season and removed in the winter. The underlying trashracks have clear spacing of 1 ¼ inch.

The project lands consist of 12 acres. The shoreland immediately surrounding the project is primarily mixed hardwoods and softwoods. Emergent, scrub-shrub, and forest wetlands are also found along the impoundment. Use of the project area is limited to a public road, bridge, and railroad track. A park and recreation area are nearby, used for fishing, boating, and swimming.

Threatened or endangered species potentially present in the project vicinity include the Northern long-eared bat, Eastern whip-poor-will, and creeper mussel. It is unlikely that the Northern long-eared bat would be impacted, if present, as there are no routine tree-clearing activities or corridor maintenance activities planned, nor are there any projects currently planned which would involve tree clearing. In order to minimize impact to the mussel species, the project owner must coordinate any drawdowns, or activities with potential to disturb the species, with resource agencies.

The first dam at the project site was a timber-crib structure constructed in 1879. The existing hydropower station was completed in 1913 to supply two paper mills. The two existing dams were constructed in 1938 and 1950 to replace the former structures. The powerhouse and the Strathmore Mill complex are eligible for inclusion in the National Register of Historic Places. The Massachusetts State Historic Preservation Office has concluded that project operations will have no adverse effect on these resources.

Recreational resources at the project include a carry-in boat launch, canoe take-out in the impoundment, a canoe portage around the dam, fishing access, and trail access to the project. Strathmore Park is located downstream and has access for fishing, boating, and swimming. Public access is provided free of charge.

June 3, 2020:  On May 29, 2020 the Low Impact Hydropower Institute (LIHI) preliminarily approved the Woronoco Project (LIHI #109) for a new 5-year term of Low Impact Certification. The Certificate includes the following conditions:

This decision is preliminary pending the 30-day appeal window. Only those who commented on the initial application during the 60-day comment period are eligible to file an appeal. Such appeal needs to include an explanation as to how the Project does not meet the LIHI criteria. Appeal requests can be submitted by email to comments@lowimpacthydro.org with “Woronoco Project” in the subject line, or by mail addressed to the Low Impact Hydropower Institute, 329 Massachusetts Ave, Suite 6, Lexington, MA 02420. All requests will be posted to the website. The applicant will have an opportunity to respond and any response will also be posted. Requests must be received by 5 pm Eastern time on July 3, 2020. The full application and reviewer’s report are available below.

If no appeal requests are received and the decision becomes final, the Certification term for the Project will be January 28, 2020 through January 27, 2025.

February 24, 2020: The Low Impact Hydropower Institute has received a complete application for Low Impact Recertification of the Woronoco Hydroelectric Project.  LIHI is seeking public comment on this application.  Specifically, we are interested in knowing whether you think the Project meets the LIHI Low Impact Certification Criteria, as revised in the 2nd Edition Handbook.  Please review the program and criteria in LIHI’s revised Handbook and then review the Project’s application materials below.

Comments that are directly tied to specific LIHI criteria (flows, water quality, fish passage, etc.) will be most helpful, but all comments will be considered.  Comments may be submitted to the Institute by e-mail at comments@lowimpacthydro.org with “Woronoco Project Comments” in the subject line, or by mail addressed to the Low Impact Hydropower Institute, 329 Massachusetts Avenue, Suite 6, Lexington, MA 02420.  Comments must be received on or before 5 pm Eastern time on April 24, 2020 to be considered.  All comments will be posted to the web site and the applicant will have an opportunity to respond.  Any response will also be posted.

November 8, 2015: LIHI Executive Director Michael J. Sale, using authority delegated from the LIHI Governing Board, has certified that the Woronoco Hydroelectric Project (FERC No. P-2631) continues to satisfy the LIHI Certification Criteria. A Preliminary Decision was announced on November 8, 2015, and a 30-day appeal period was open through December 8, 2015. No requests for appeal were received.

July 10, 2015: The Woronoco Hydroelectric project has been granted an extension of the current certificate term. The new expiration date is December 31, 2015. See ExtensionLetter_20150708 for explanation below.

June 23, 2015: The Low Impact Hydropower Institute received a comment letter from Caleb Slater, of the Massachusetts Division of Fisheries and Wildlife, in support of the recertification of the Woronoco project. The letter can be read in the Files section below.

April 10, 2015: The Woronoco Hydroelectric Project has been granted a six month extension of the current certification term.  The new expiration date is July 27, 2015.  See April 2015 Letter Extending Term and Explaining Recertification below.

March 28, 2010: The public comment period for the application for certification has been closed.

January 28, 2010: Woronoco Hydro, LLC has submitted an application for certification of the Woronoco Hydroelectric Project. The public comment period will remain open for 60 days.