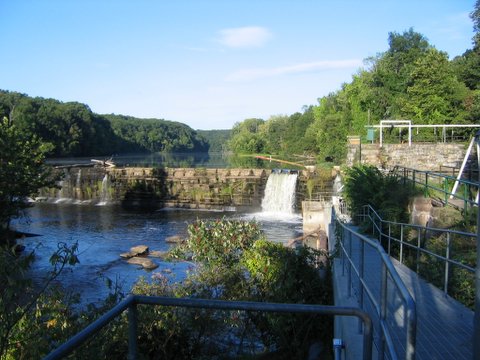 The project includes: an 18-foot-high, 447.5-foot-long concrete dam with stone abutments that creates a 20-acre impoundment and a 0.5-mile-long bypass reach bifurcated by an island; a 2,610-foot-long, 50-foot-wide power canal with stone and masonry headworks containing six gates; a concrete and brick powerhouse containing two vertical Francis turbine/generators with a combined capacity of 1.4 MW; and a tailrace approximately 157 feet in length and having a width varying from 30 to 48 feet.

The project operates in a run-of-river mode and impounds a 20-acre impoundment. The project provides minimum flows into the 0.57-mile-long bypass reach of 85 cfs from April 1 through July 15 and a 125 cfs flow from September 1 through October 31. Bypass flow consists of 40 cfs through the fishway, 25 cfs through the downstream fish bypass, and 9-25 cfs through spillage slots in the dam. Project operations are based on an instream flow study and the Memorandum of Agreement developed with the project owner, Massachusetts Division of Fisheries and Wildlife (MDFW), and the US Fish and Wildlife Service (USFWS).

Waters within the project reach are designated as Category 2, attaining uses of aesthetics and secondary contact recreation. Massachusetts Department of Environmental Protection confirmed that the project meets water quality standards.

Upstream fish passage is facilitated by a Denil-style fishway which provides passage for anadromous species including American shad, Atlantic salmon, sea lamprey, and blueback herring. An eelway was constructed to facilitate passage for American eel, a catadromous species. Passage through the project opens roughly 20 miles of habitat on the Westfield River. Downstream fish passage is facilitated by a downstream fish bypass system with a flow of 25 cfs.

The project property consists of 23 acres. No lands of significant ecological value exist in the project area due to the project’s urban location. The project operates under a plan to control bank slumping and erosion caused by construction of recreation enhancements.

Threatened and endangered species potentially within project vicinity include: Bald Eagle (wintering). USFWS confirms that the project does not house any critical habitat for any listed species and does not impact listed species.

Cultural resources in the project vicinity include a paper mill complex in the area is listed on the National Register of Historic Places. Consultation with the State Historic Preservation Office is required prior to any construction or ground-disturbing activities.

Recreational resources at the project include fishing access, a canoe launch, and hiking trails. Public access is provided free of charge.

Condition 1. During downstream fish passage periods, the fish exclusion racks/screens shall be maintained at the head of the power canal. The facility Owner shall continue to coordinate with MA DFW regarding the installation, removal, and maintenance of them. In its annual compliance statements, the Owner shall confirm that such agency coordination has occurred and report on any issues or concerns raised by MDFW or USFWS with a summary of the corrective actions taken.

Condition 3.
a) The facility Owner shall consult with the City of West Springfield to resolve concerns related to the FERC-required recreation area or an alternate site if possible; and shall obtain any FERC-required approvals or license amendments needed. Status updates shall be provided to LIHI in annual compliance submittals.

b) Satisfied in 2022. Within 180 days of the final recertification notice, the facility Owner shall consult with Robinson State Park management on the feasibility of adapting or extending an existing trail to provide a safe take-out and portage route through the park. The results of discussions shall be summarized in annual compliance statements until a final feasibility determination is made.

October 22, 2021: The Low Impact Hydropower Institute has issued a final decision on the recertification of the West Springfield Project. The 30-day appeal window closed on October 17, 2021 and no appeals were filed. Therefore, the decision to certify the project is now final. The new term is August 29, 2020 through August 28, 2025.

This decision is preliminary pending the 30-day appeal window. Only those who commented on the initial application during the 60-day comment period are eligible to file an appeal. Such appeal needs to include an explanation as to how the Project does not meet the LIHI criteria. Appeal requests can be submitted by email to comments@lowimpacthydro.org with “West Springfield Project” in the subject line, or by mail addressed to the Low Impact Hydropower Institute, 1167 Massachusetts Ave, Office 407, Arlington, MA 02476. All requests will be posted to the website. The applicant will have an opportunity to respond and any response will also be posted. Requests must be received by 5 pm Eastern time on October 17, 2021. The full application and reviewer’s report are available below.

If no appeal requests are received and the decision becomes final, the Certification term for the Project will be August 29, 2020 through August 28, 2025.

June 21, 2021: The Low Impact Hydropower Institute (LIHI) has received a complete recertification application from A & D Hydro, Inc. for the West Springfield Project located on the Westfield River in Massachusetts.

LIHI is seeking comment on this application. Comments that are directly tied to specific LIHI criteria (flows, water quality, fish passage, etc.) will be most helpful, but all comments will be considered. Comments may be submitted to LIHI by e-mail at comments@lowimpacthydro.org with “West Springfield Project Comments” in the subject line, or by mail addressed to the Low Impact Hydropower Institute, 1167 Massachusetts Avenue, Office 407, Arlington, MA 02476. Comments must be received at the Institute on or before 5 pm Eastern time on August 20, 2021 to be considered. All comments will be posted to the web site and the applicant will have an opportunity to respond. Any response will also be posted. The complete application can be found below.

As provided for in Section 2.14 of the LIHI Handbook, the Preliminary Certification Decision to certify, along with the Application Reviewer’s report and (if prepared) report of the Executive Director, will be posted on the Institute’s Web page for 30 days.  Notice of the posting will be provided to all individuals or organizations that commented on the initial Application Package.

Any Commenter may submit a letter to the Executive Director requesting an appeal within the 30-day period.  The appeal request must state specific reasons why the hydropower facility should have failed one or more criteria.  If an individual or organization did not comment on the initial Application Package, they may not file an appeal.  Further information about the LIHI appeal process is available in the LIHI Handbook, available at https://lowimpacthydro.org/certification-program-html/.

If no appeal is requested within the 30-day period, the Executive Director will issue LIHI Certification for the facility and post a notification of certification on the Institute’s website.  Once final, the effective certification date for the West Springfield Project is August 29, 2015 for a five (5) year term, which will expire on August 29, 2020.

The public comment period for this application closed on December 21, 2015.

December 28, 2012: The West Springfield Project has been certified for a second five year term after it was determined that the project continues to meet the Low Impact Hydropower certification criteria. The effective date of certification is August 29, 2010 and it expires on August 29, 2015.

August 29, 2005: A&D Hydro, Inc. has submitted an application for certification of the West Springfield Project, located on the Westfield River.