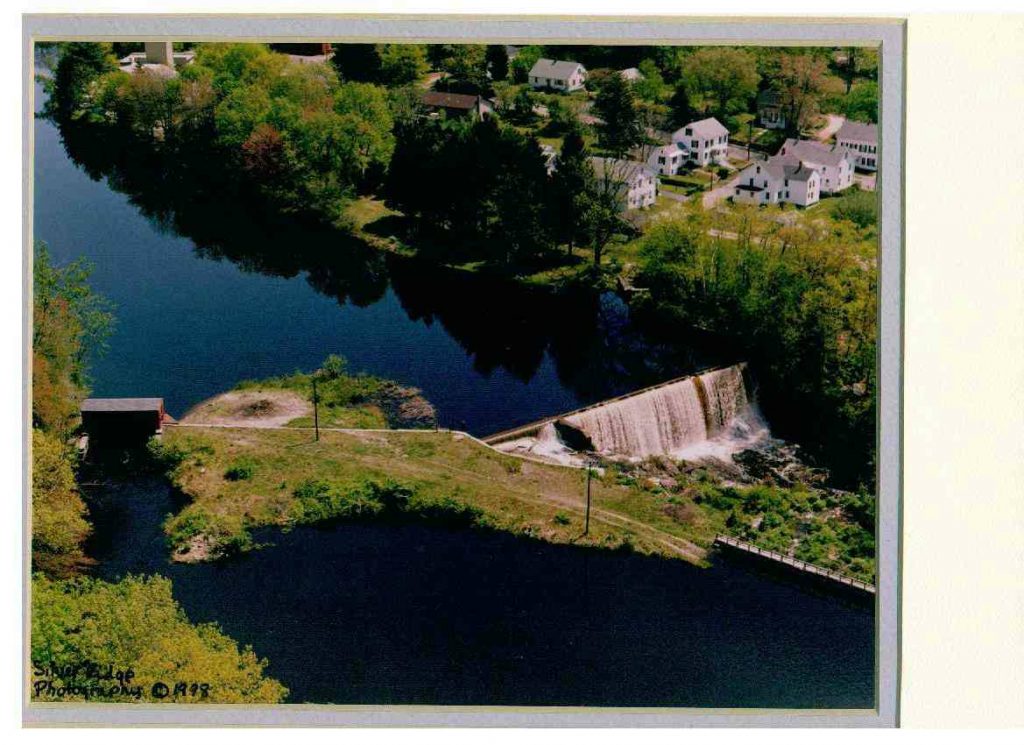 The Ware River flows southwest through the middle of the state and joins the Quaboag River at Three Rivers, Massachusetts, to form the Chicopee River on its way to the Connecticut River confluence in Springfield. There are five dams upstream of the Project with the closest dam (the Wheelwright Pond Dam) located about 7 miles upstream in the village of Wheelwright. Nine dams lie downstream of the project before the confluence with the Connecticut River. Two lie on the Ware River and the rest lie on the Chicopee River. These include Red Bridge (LIHI #96), Collins (LIHI #88), Putts Bridge (LIHI #102), Indian Orchard (LIHI #112), Chicopee Falls Dam, and Dwight (LIHI #170).

The project operates in a run-of-river mode and provides a minimum flow of 26.8 cfs continually over the upper dam into the bypassed reach. This flow was voluntarily increased as recommended by Massachusetts Division of Fisheries and Wildlife (MDFW). The minimum flow in combination with leakage flow from the four turbines at the upper development ensures the release of 90-100 cfs downstream of the project at all times.

Waters within the project reach are designated as Class B by the Massachusetts Department of Environmental Protection (MDEP). The waters are also listed as impaired due to E. coli and fecal coliform. MDEP has confirmed that the project is not contributing to nor the cause of the listed impairment. It is likely that the impairment is the result of illicit connections to storm sewers and urban stormwater runoff.

Migratory fish are not able to reach this stretch of river due to the presence of downstream barriers and dams without upstream passage. The only species that may exist in the project area is the catadromous American eel. Resident riverine fish species include stocked trout, fallfish, yellow perch, yellow bullhead, common shiner, golden shiner, spot-tailed shiner, bluegill, redbreast sunfish, pumpkinseed, longnose dace, black nose dace, tessellated darter, chain pickerel, rock bass, white sucker, eastern and largemouth bass. The upper and lower developments each have trashracks with1.75-inch and 1.5-inch clear spacing respectively, to minimize the potential for entrainment. The bypass minimum flow provides a route for downstream passage for resident species.

The upper powerhouses are located in a small metal building with little to no land surrounding them and the lower powerhouse is located within a mill building. Land use in the bypass reach, lower impoundment and downstream reach is considered non-residential. Land use in the upper impoundment consists of residential and non-residential uses immediately upstream of the dam. Forests line the left descending bank and both shorelines of the project impoundments. Due to the small footprint and urban environment of the project, no lands of significant ecological value exist in the project area.

Threatened or endangered species potentially present in the project vicinity include the Northern long-eared bat, creeper mussel, brook floater, and triangle floater. Due to the urban nature of the project, it is unlikely that the bat species is present or that the project operations have any impact on the species. The Lower Ware Dam and downstream reach are mapped as Priority and Estimated Habitat for the three freshwater mussel species. MDFW was consulted to provide recommendations for mitigating any impacts on the listed mussel species and their habitat. These recommendations relate to any future drawdown events and provide guidance for ensuring protection of the species.

Cultural resources in the project area include the Ware Historic Mill Yard which was listed on the National Register of Historic Places in 1986. In 2017, when the project was proposing turbine upgrades, the Massachusetts Historical Commission was consulted to determine any impact on cultural and historic resources. The Commission found no adverse effect of project upgrades and operations on nearby resources.

No formal recreational amenities are provided at the project due the small footprint of the project and the steep, rocky nature of the embankment and other safety concerns. Greenville park is located in the upper impoundment and provides handicap accessible fishing piers, scenic trails, picnic areas, sports amenities, and a boat launch.

The Certificate includes the following conditions:

2022: No material changes or compliance issues were identified. The project remains in compliance based on the annual review. For Condition 2, the project reported conducting agency consultation regarding additional monitoring when water conditions allow.

2021: There were no reported changes or compliance issues. The project remains in compliance based on the annual review. For Conditions 1 and 3, the project provided copies of the required plans, thus satisfying those conditions.  For Condition 2, the project reported an extension request would be made to conduct monitoring in 2022 due to persistent high flows in 2021.

May 1, 2020:  The Low Impact Hydropower Institute (LIHI) has preliminarily approved the Ware River Project (LIHI #47) for a new 5-year term of Low Impact Certification. This decision is preliminary pending the 30-day appeal window. Only those who commented on the initial application during the 60-day comment period are eligible to file an appeal. Such appeal needs to include an explanation as to how the Project does not meet the LIHI criteria. Appeal requests can be submitted by email to comments@lowimpacthydro.org with “Ware River Project” in the subject line, or by mail addressed to the Low Impact Hydropower Institute, 329 Massachusetts Ave, Suite 6, Lexington, MA 02420. All requests will be posted to the website. The applicant will have an opportunity to respond and any response will also be posted. Requests must be received by 5 pm Eastern time on May 31, 2020. The full application and reviewer’s report are available below. If no appeal requests are received and the decision becomes final, the Certification term for the Project will be August 24, 2019 through August 23, 2024.

February 25, 2020: The Low Impact Hydropower Institute (LIHI) has received a complete recertification application from Ware River Power, Inc. for the Ware River Project located on the Ware River in Ware, Massachusetts. The complete application can be found below. LIHI is seeking comment on this application. Comments that are directly tied to specific LIHI criteria (flows, water quality, fish passage, etc.) will be most helpful, but all comments will be considered. Comments may be submitted to the Institute by e-mail at comments@lowimpacthydro.org with “Ware River Project Comments” in the subject line, or by mail addressed to the Low Impact Hydropower Institute, 329 Massachusetts Avenue, Suite 6, Lexington, MA 02420. Comments must be received at the Institute on or before 5 pm Eastern time on April 25, 2020 to be considered. All comments will be posted to the web site and the applicant will have an opportunity to respond. Any response will also be posted.

December 14, 2015: LIHI Executive Director Michael J. Sale, using authority delegated from the LIHI Governing Board, has certified that the Ware River Hydroelectric Project (FERC No. P-3127) continues to satisfy the LIHI Certification Criteria. A Preliminary Decision was announced on October 23, 2015, and a 30-day appeal period was open through November 23, 2015. No requests for appeal were received. This Certification Decision includes one facility-specific conditions, as follows:

June 18, 2014: LIHI has received an application for a second term of certification of the Ware River Hydroelectric Project. The application materials can be found in the “Files” section below.

January 5, 2010: After much discussion between Ware River Hydro, Inc. and the Massachusetts Department of Fish and Game concerning a possible resolution based on increasing minimum stream flow, the details of this potential agreement can be read below, in a letter from Lucas Wright to LIHI, dated December 10, 2009.

August 24, 2009: Ware River Hydro, Inc. has submitted an application for certification of the Pioneer Hydroelectric Company Project located on the Ware River in Ware, Massachusetts. A public comment period will remain open for 60 days, until October 24, 2009.