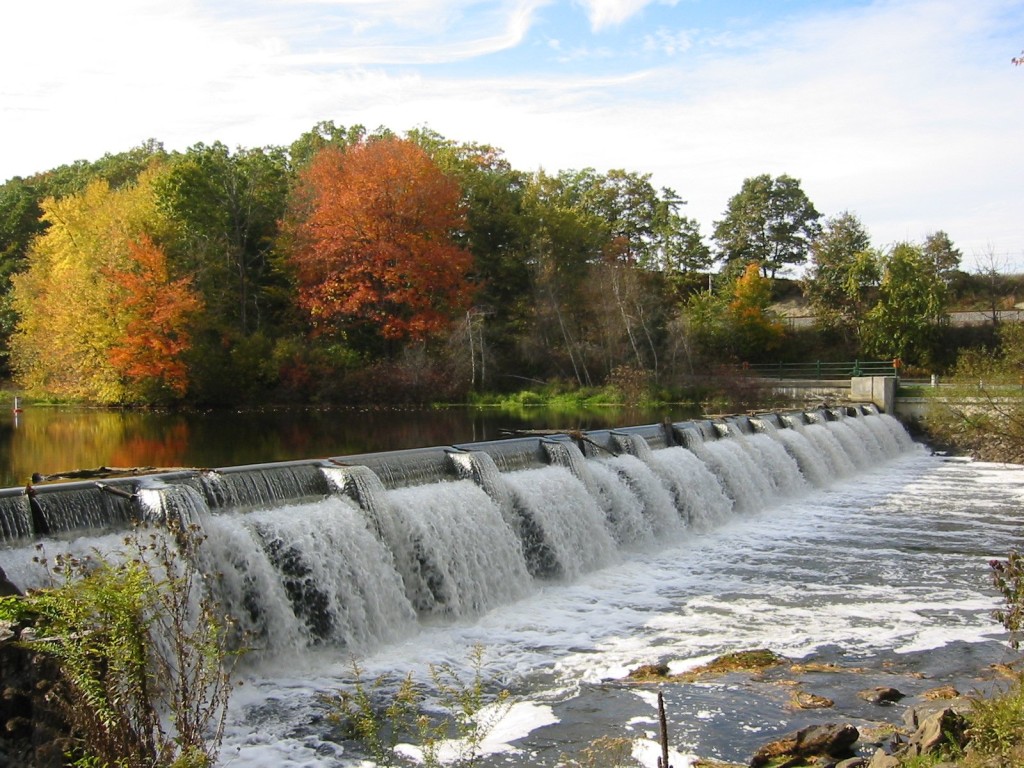 The Ice House Project is located on the Nashua River in Ayer, Massachusetts. The dam has been in use since the 1790s, and was used as a reference marker in laying out the nearby towns. The location was probably chosen due to the availability of a rock outcrop in the riverbed, allowing solid anchorage for a dam. The current dam was built in 1909 as was the powerhouse, built in the Victorian Eclectic and Panel Brick style. The site was used for grist milling, paper making, dye manufacturing, and ice making from 1790 to 1967. A fire in the 1980s destroyed most of the powerhouse. The project owner purchased the site in 1999 and spent nine years restoring every aspect of the property including the powerhouse, dam, and headgate structure. The adjacent mill building was also completely reconstructed. The structures were repaired using historically accurate materials and designs. Upstream of the project are several dams owned by the City of Fitchburg, MA as well as the large Wachusett Dam in Clinton, MA a reservoir on the Massachusetts Water Resource Authority water supply system. Downstream from the project is the Pepperell Dam Hydroelectric Project and additional downstream dams in New Hampshire.

The Ice House dam is 190 feet long, 12 feet high and topped with a spillway with 24-inch-high flashboards. The project has a headgate structure, equipped with four 8-foot-high, 10-foot-wide gates, leading to a 50-foot-wide, 109-footlong power canal. The restored powerhouse contains two turbine generating units with a total installed capacity of 280 kilowatts and is located in the canal about 75 feet downstream of the headgate. Water used for generation discharges from the powerhouse into a 50-foot-wide, 400-foot-long tailrace (measured from the headgate to the tailrace outlet). The Nashua River reach that is bypassed by operating the project (measured from the dam to the tailrace outlet) is about 300 feet long.

The project operates in an instantaneous run-of-river mode and impounds a 137-acre reservoir. The project is equipped with a real-time water level recording device to match turbine discharge with river inflow. When flow in the Nashua River is equal to or less than the hydraulic capacity of one turbine unit (160 cfs), no units operate, and all inflow spills over the flashboards. When flow exceeds 160 cfs, one turbine unit begins generating and the excess is spilled over the flashboards until inflow exceeds an additional 160 cfs or 320 cfs (the hydraulic capacity of two units), at which time the second turbine unit begins generating, with all flows over 320 cfs spilled over the flashboards. The project is required to provide 1 million gallons of bypass flow per day. This flow regime was developed in consultation with the Massachusetts Division of Fisheries and Wildlife (MDFW).

Waters within the project reach are designated as Class B which requires suitable habitat for aquatic biota, wildlife, and water suitable for primary and secondary contact recreation. The waters in the project vicinity are impaired for total phosphorus, E. coli, and sediment toxicity while waters upstream (15 miles) of the project are impaired for pH and dissolved oxygen. Upstream impairment is likely due to wastewater treatment plant discharge. The Nashua River has a long history of water quality issues but has been greatly improving over time. Review from the Nashua River Watershed Association notes that the project is not likely to be the cause of the impairments. The upstream wastewater treatment plants, sewer overflows, stormwater runoff, and historical industrial uses of river are likely the cause.

The Nashua River is part of the Merrimack River Basin which supports many migratory fish species including American shad, river herring, and Atlantic salmon. A basin-wide fishery restoration effort focuses on restoring shad and herring populations. Currently, the downstream dam precludes fish access to the project. Once passage is installed at the Pepperell Dam, resource agencies will prescribe passage measures at this project. American eels are also present and an upstream eel ladder facilitates passage at the project. A siphon pipe provides attraction flow and keeps the ladder’s substrate wetted. The passage is removed for maintenance and lowered back into the water after ice-out each spring. This passage measure was developed in consultation with MDFW and USFWS. Additionally, though not designed for it, the project minimum flow through the spillway notch provides informal downstream passage for riverine fish and eels. Trashracks with 2-inch clear spacing mitigate entrainment of larger fish.

The project lands consist of 11 acres. The project is surrounded by the Oxbow National Wildlife Refuge and the Nashua River is designated a Wild and Scenic River in that reach. The owner limits routine vegetation management to mowing and pruning to protect the shoreline. The owner consults with the Massachusetts Natural Heritage and Endangered Species Program before conducting impoundment drawdown activities which only occur between July and October so as to not disturb nesting and other wildlife activity.

Threatened or endangered species potentially present in the project vicinity include the Northern long-eared bat and Blanding’s turtle. No critical habitat for the Northern long-eared bat exists in the project area. Non-emergency drawdowns are restricted to the months of July through October to protect turtle activity. The project provides annual reports concerning work conducted within 100 feet of wetlands or within 200 feet of the river per the Town of Ayer Order of Conditions and Massachusetts Natural Heritage and Endangered Species Program guidance. Other surrounding lands are owed by nearby towns, the Commonwealth of Massachusetts, USFWS or the Oxbow National Wildlife Refuge.

Cultural resources in the project area include the West Main Street Ice House Industrial Area which includes the project’s power canal, dam, and powerhouse as well as the adjacent office building. All are potentially eligible for listing on the National Register of Historic Places.

PLUS-Standard: Rehabilitation of the powerhouse was undertaken with care including the use of historically accurate materials and maintenance of important historic architectural elements that were present in the remains of the former powerhouse. The modern Grady Research Building was constructed on the site of the destroyed former mill building. The modern building was designed to be appropriate for the historic period and visitors tend to believe that the building is original to the site. The owner preserved remnants of the original circa 1903 turbines and gate works that are now on public display. The project owner provides presentations on the history of the site and hosts many informational and educational tours.

Recreational resources at the project include a canoe portage and informal access for fishing. Steep banks on the Ayer side of the project makes public access too dangerous and warning signs are posted. Public access, where safe, is allowed free of charge.

2022: No material changes or compliance issues were identified. The project remains in compliance based on the annual review.  For Condition 1, the project reported no change in status.  Eel passage is provided as noted above.

2021: There were no reported changes or compliance issues. The project remains in compliance based on the annual review.  For Condition 1, the project report no notifications were received.

2020: There were no reported changes or compliance issues. The project remains in compliance based on the annual review.  For Condition 1, the project report no notifications were received.

October 31, 2019:  The decision to recertify the Ice House Hydroelectric Project is final. No appeals were received during the appeal period which closed on October 30, 2019. The new certification term for the Project is from August 6, 2019 through August 5, 2027.

September 30, 2019:  On September 27, 2019 the Low Impact Hydropower Institute preliminarily approved Low Impact Recertification for the Ice House Hydroelectric Project, LIHI #44. This decision is preliminary pending the 30-day appeal window. Only those who commented on the initial application during the 60-day comment period are eligible to file an appeal. Such appeal needs to include an explanation as to how the Project does not meet the LIHI criteria. Appeal requests can be submitted by email to comments@lowimpacthydro.org with “Ice House Hydroelectric Project” in the subject line, or by mail addressed to the Low Impact Hydropower Institute, 329 Massachusetts Ave, Suite 6, Lexington, MA 02420. All requests will be posted to the website.  The applicant will have an opportunity to respond and any response will also be posted. Requests must be received by 5 pm Eastern time on October 30, 2019.  The full application and reviewers report are available below. If no appeal requests are received and the decision becomes final, the Certification term for the Project will be August 6, 2019 for a term of eight (8) years, which will expire on August 5, 2027.

July 19, 2019: The Low Impact Hydropower Institute has received a complete application for Low Impact Recertification of the Ice House Hydroelectric Project.  LIHI is seeking public comment on this application.  Specifically, we are interested in knowing whether you think the Project meets the LIHI Low Impact Certification Criteria, as revised in the 2nd Edition Handbook.  Please review the program and criteria in LIHI’s revised Handbook and then review the Project’s application materials below. Comments that are directly tied to specific LIHI criteria (flows, water quality, fish passage, etc.) will be most helpful, but all comments will be considered.  Comments may be submitted to the Institute by e-mail at comments@lowimpacthydro.org with “Ice House Project Comments” in the subject line, or by mail addressed to the Low Impact Hydropower Institute, 329 Massachusetts Avenue, Suite 6, Lexington, MA 02420.  Comments must be received on or before 5 pm Eastern time on September 19, 2019 to be considered.  All comments will be posted to the web site and the applicant will have an opportunity to respond.  Any response will also be posted.

August 21, 2014: The Ice House Hydroelectric Project has been recertified as low impact, continuing to meet the requirements of the Low Impact Hydropower Institute Certification Program. It will have a term of five years, effective August 6, 2014 and expiring August 6, 2019.

June 9, 2014: LIHI received a comment letter from the Massachusetts Division of Fisheries and Wildlife regarding the recertification of the Ice House Hydropower Project. The letter can be read in full in the “Files” section below.

April 23, 2014: The Low Impact Hydropower Institute received an application for a second term of certification of the Ice House Hydropower Project. The application materials are available in the “Files” section below.

August 6, 2009: Ice House Partners has submitted an application for certification of the Ice House Hydroelectric Project. The public comment period will remain open for 60 days.