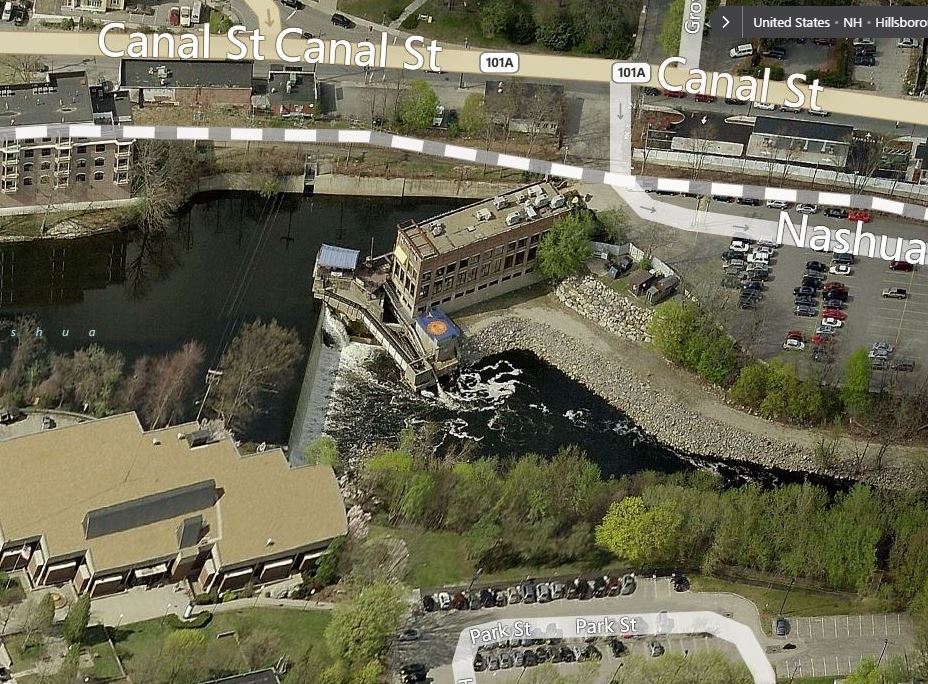 The Jackson Mills Project is located on the Nashua River approximately 1.25 miles upstream of the confluence with the Merrimack River in Nashua, New Hampshire. The mainstem Nashua River is 37.5 miles long and begins in Lancaster, Massachusetts at the confluence of the North and South Nashua rivers and flows northeast through Shirley, Ayer, and Pepperell, MA into Nashua, New Hampshire. Construction of the Jackson Mills Dam was completed in 1920.

The project dam is a 180-foot-long by 33-foot-high gravity-type masonry structure that includes an eight-foot-high pneumatic crest gate and concrete-faced stone gravity-type abutments. The top eight feet of the dam include a pneumatic crest gate. Upstream and downstream fish passage is provided at the project by an Alaska steep-pass fishway and a stainless-steel bypass pipe. The powerhouse, located at the north dam abutment, houses a 1 MW, single-regulated propeller turbine generator.

The project operates in a run-of-river mode and impounds a 40-acre reservoir. Based on information related to the turbine replacement project discussed in the project’s 2021 application for recertification, there appears to be a short bypassed reach approximately 100 feet long. The project provides a minimum flow of 207 cfs (or inflow if less) to provide adequate aquatic habitat in the river. This flow regime was developed in consultation with US Fish and Wildlife Service (USFWS).

Waters within the project reach are designated as Class B waters, best suited for primary contact recreation, aquatic habitat, and water supply after treatment. However, the entire Nashua River is listed as impaired for aquatic life, fish consumption, and swimming due to mercury, E. coli, and non-native aquatic plant contamination. Water quality monitoring was conducted from 2015 to 2017 in collaboration with the New Hampshire Department of Environmental Services. The testing concluded that the project is not adversely impacting water quality of the river. NDHES will likely be requesting that further monitoring be conducted following the installation of the proposed new turbine.

Migratory fish passage in the Nashua River was blocked in the 1800s when the Lowell or Pawtucket dam (LIHI #142) and Lawrence or Essex dam (LIHI #121) were constructed on the Merrimack River. However, both projects now provide upstream passage for alewife, blueback herring, American eel, American shad, Atlantic salmon, sea lamprey, and striped bass. A Denil style fishway with two entrances (tailrace and spillway) was constructed in 1984 at Jackson Mills and operates annually. The City of Nashua has continued to work collaboratively with NH Fish and Game Department, the National Oceanic and Atmospheric Administration, and USFWS to optimize fishway operations. USFWS inspects the fish passage facilities on an annual basis and makes recommendations for modifications to the fishway structures and operations if needed. Upstream fish passage typically occurs from May 1 through June 30, and upstream eel passage continues from approximately July 1 through September 15, once the Denil ladder is fitted with the eel trap. Typical downstream fish passage occurs from May 1 through July 31 and August 15 through November15. Downstream eel passage is supported between August 15 and November 15. The downstream fish passage facility is designed to pass American shad, alewife and Atlantic salmon. Downstream eel passage includes the use of a ramp trap that utilizes the downstream fish passage entrance, chamber, and piping. In addition, nighttime turbine shutdowns are instituted for three nights after a significant rain event from August 15 through November 15 or until the river temperature drops below 10 degrees Celsius. Resident fish species include black crappie, bluegill, brown bullhead, chain pickerel, golden shiner, largemouth bass, pumpkinseed, rock bass, white sucker, and yellow perch.

The land in the immediate vicinity of the dam is highly developed, urban, and privately owned. The project’s run-of-river operation results in flows that have minimal effect on shoreline erosion. The project owner has been actively managing aquatic invasive species in the Nashua River and has been successful in removing those species from the project vicinity. No lands of ecological significance are found in the project area due to the urban nature of the area.

Threatened or endangered species potentially present in the project vicinity include the Northern long-eared bat, bald eagle, and peregrine falcon. These species are not likely to be present within the project due to lack of trees and suitable habitat. None of the above species have been observed in the project area. Both Blanding’s turtle and wood turtle were observed within the Nashua River in 2007 and 2010 upstream of the Project area. However, NH Fish & Game anticipates no impact on the habitat of either species to result from proposed excavation of the tailrace.

Cultural resources in the project vicinity include the upstream Mine Falls hydro project gatehouse and Nashua Power Canal, elements of the Nashua Manufacturing Company Historic District which is listed on the National Register of Historic Places. Consultation with the New Hampshire State Historic Preservation Office found that the project has no effect on the nearby resources.

Recreational access is limited due to the developed nature of the area. The banks of the river are relatively steep and the perimeter of the impoundment is bordered by mill buildings, shopping malls, commercial facilities, and houses. The area in and around the Jackson Mills Project is part of a riverfront redevelopment project which includes designs for enhanced pedestrian access around the dam site and parking lot.

October 14, 2021: The Low Impact Hydropower Institute has issued a final decision on the recertification of the Jackson Mills Project. The 30-day appeal window closed on September 3, 2021 and no appeals were filed. Therefore, the decision to certify the project is now final. The new term is January 31, 2020 through January 30, 2025. The Certificate includes the following conditions:

This decision is preliminary pending the 30-day appeal window. Only those who commented on the initial application during the 60-day comment period are eligible to file an appeal. Such appeal needs to include an explanation as to how the Project does not meet the LIHI criteria. Appeal requests can be submitted by email to comments@lowimpacthydro.org with “Jackson Mills Project” in the subject line, or by mail addressed to the Low Impact Hydropower Institute, 1167 Massachusetts Ave, Office 407, Arlington, MA 02476. All requests will be posted to the website. The applicant will have an opportunity to respond and any response will also be posted. Requests must be received by 5 pm Eastern time on September 3, 2021. The full application and reviewer’s report are available below.

If no appeal requests are received and the decision becomes final, the Certification term for the Project will be January 31, 2020 through January 30, 2025 unless extended per condition 4.

May 10, 2021: The Low Impact Hydropower Institute (LIHI) has received a complete recertification application from Jackson Mills Corp. for the Jackson Mills Project located on the Nashua River in New Hampshire.

LIHI is seeking comment on this application. Comments that are directly tied to specific LIHI criteria (flows, water quality, fish passage, etc.) will be most helpful, but all comments will be considered. Comments may be submitted to the Institute by e-mail at comments@lowimpacthydro.org with “Jackson Mills Project Comments” in the subject line, or by mail addressed to the Low Impact Hydropower Institute, 1167 Massachusetts Avenue, Office 407, Arlington, MA 02476. Comments must be received at the Institute on or before 5 pm Eastern time on July 9, 2021 to be considered. All comments will be posted to the web site and the applicant will have an opportunity to respond. Any response will also be posted. The complete application can be found below.

August 19, 2016:  On July 18, 2016, LIHI issued a Preliminary Certification Decision that the Jackson Mills Hydroelectric Project (FERC No. P-7590) continues to satisfy the LIHI Certification Criteria.  Notice of the preliminary decision to certify was posted on the Institute’s website and sent to the New Hampshire stakeholder email distribution list on July 19, 2016.  LIHI provided a 30-day appeal period for commenters to request an appeal of the preliminary decision. No requests for appeal were received within the  30-day period. Therefore, the recertification is final. The Certification includes two facility-specific conditions, as follows:

As provided for in Section 4.2.5 of the LIHI 2nd Edition, the Preliminary Certification Decision to certify, along with the Application Reviewer’s report and (if prepared) report of the Executive Director, will be posted on the Institute’s Web page for 30 days.  Notice of the posting will be provided to all individuals or organizations that commented on the initial Application Package.

Any Commenter may submit a letter to the Executive Director requesting an appeal within the 30-day period, which ends on August 19, 2016.  The appeal request must state specific reasons why the hydropower facility should have failed one or more criteria.  If an individual or organization did not comment on the initial Application Package, they may not file an appeal.  Further information about the LIHI appeal process is available in the LIHI Handbook, available at https://lowimpacthydro.org/certification-program-html/.

If no appeal is requested within the 30-day period, the Executive Director will issue LIHI Certification for the facility and post a notification of certification on the Institute’s website.  Once final, the effective certification date for the Jackson Mills Project is January 31, 2015 for a five (5) year term, which will expire on January 31, 2020.

October 30, 2015: The Low Impact Hydropower Institute has received a complete application for a new term of Low Impact Certification for the Jackson Mills Hydroelectric project.  The application materials can be found below in the Files section.

July 10, 2015: The Jackson Mills Hydroelectric project has been granted an extension of the current certificate term. The new expiration date is December 31, 2015.

January 31, 2010: Essex Hydro Associates has submitted an application for certification of the Jackson Mills Hydroelectric Project. A public comment period will remain open for 60 days.