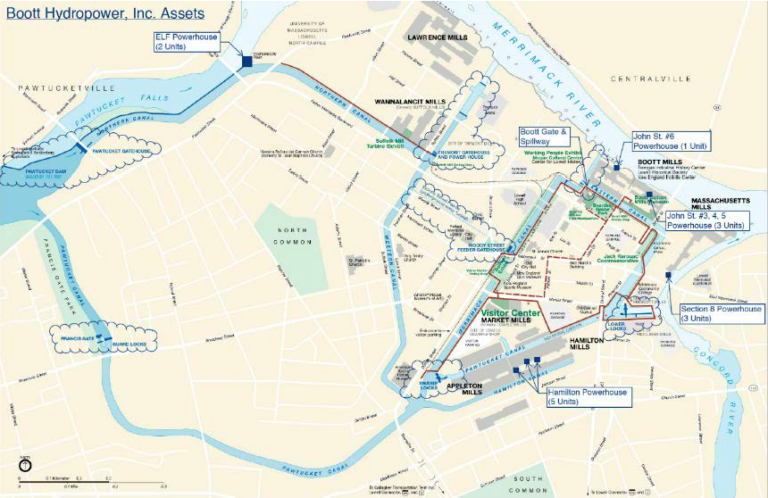 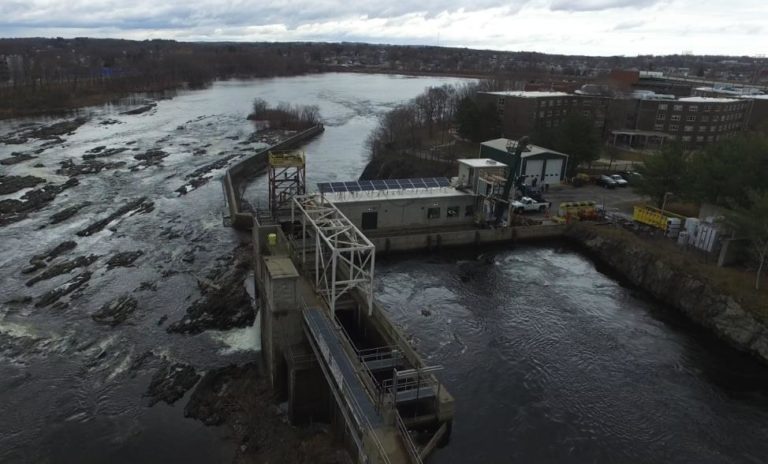 The Lowell Project is located on the Merrimack River in the City of Lowell, Massachusetts. The Merrimack River originates at the confluence of two major rivers, the Pemigewasset and Winnipesaukee, in Franklin, N.H. From its origin, the river travels 115 miles to the Atlantic Ocean at Newburyport, Massachusetts. The project is the second dam on the mainstem, located 10 miles upstream of the Lawrence Hydroelectric Project.

The project dam was originally constructed in 1847, with a second spillway added in 1875. Expansion of the project was conducted in 1985 with the construction of a new powerhouse on the Northern Canal. Four other power plants are operated out of existing mill buildings along the canal system. The Pawtucket gatehouse was constructed to control flow from behind the Pawtucket Dam into the Northern Canal. Notably, it was the site of the first Francis turbine which operated the ten wooden gates that controlled the flow of the Merrimack into the canal. Now the gates are electronically controlled. Historically, Lowell housed many hydroelectric and hydromechanical power generators throughout the many mill buildings along the canal. Most of these units have been inoperable or decommissioned for quite some time.

The project includes Pawtucket Dam, the E.L. Field powerhouse on the river and four smaller power stations in the canal system, with a total installed capacity of 22.463 MW, upstream fish passage systems, and the canal system running through downtown Lowell. The dam is a 1,093 foot-long, 15-foot-high stone-masonry gravity structure. Construction of the new powerhouse included excavation of a 1,000-foot-long tailrace channel. The tailrace is separated from the river by a five-foot-high training wall. The canal system consists of two tiers, the Northern Canal, controlled by the gatehouse at the dam, and the Pawtucket Canal, controlled by the Francis Gate and Guard Locks.

The project operates in run-of-river mode and creates a 720-acre reservoir. The project provides a minimum flow of 1,990 cfs downstream of the E.L. Field powerhouse. Flows are also provided seasonally in the bypassed reach below Pawtucket Dam for migratory fish passage. Flow control and habitat enhancement are being provided by a pneumatic crest gate. The flow regime was developed using the summer Aquatic Base Flow derived from the US Fish and Wildlife Service recommendation for New England stream flow.

Waters within the project reach are designated impaired for several designated uses including fish consumption (mercury from atmospheric deposition), primary contact recreation (coliform bacteria), and aquatic life. Additional impairments include lead, PCBs, and DDT in the bypass and though sources are unknown, it is likely that their presence is due to historical contamination from mills and industrial facilities on the canal system. Massachusetts Department of Environmental Protection notes that the impairments are due to other sources and not within the project’s control.

Anadromous fish historically found in the project area include Atlantic salmon, American shad, and river herring. Construction of the Essex Dam in 1847 in Lawrence extirpated Atlantic salmon and diminished herring and shad populations. Upstream and downstream fish passage facilities at the project include a fish elevator and downstream fish bypass at the E.L. Field powerhouse, and a vertical-slot fish ladder at the Pawtucket Dam. The facilities were designed in consultation with US Fish and Wildlife Service and is now monitored and evaluated by both federal and state fishery agencies.

The project property consists of 40 acres not including the impoundment. The surrounding lands are urbanized and not owned by the project. A new crest gate system reduces impoundment drawdowns, a feature that may reduce riverbank erosion.

Threatened and endangered species potentially within project vicinity include: Northern long-eared bat, bald eagle, peregrine falcon, red knot, cobra clubtail, umber shadowdragon, Blanding’s turtle, small whorled pogonia, and sandplain gerardia. The primary concern for bat species is habitat destruction, however the project does not plan to remove trees in the project area. Multi-year telemetry studies have found that the project does not impact riverine fish species and further, no impact on listed species occurs. No critical habitats for listed species occur in the project area.

Historic properties include the Pawtucket Dam and the canal system and associated mill buildings. The Lowell Act recognizes the historical value of this area and established the Lowell National Historical Park and Lowell Historic Preservation District. No cultural or historic management plan is required for the project as any activities with the potential to threaten cultural resources at the project are regulated by the license, Lowell Act, and National Historic Preservation Act. The project maintains an operating agreement with the National Park Service to provide flows for tour boat operations.

Recreational resources at the project include a visitor facility at the powerhouse, Northern Canal Walkway, and National Park Service boat tours. Public access is provided free of charge.

March 12, 2018– On March 9, 2018, the Low Impact Hydropower Institute (LIHI) preliminarily approved Low Impact Certification for the Lowell project. The reviewer’s report and the report of the Executive Director are attached at the bottom of this page. This decision is preliminary pending the 30-day appeal window. Only those who commented in the initial application 60-day comment period are eligible to file an appeal. Such appeal needs to include an explanation as to how the project does not meet the LIHI criteria. Appeal requests can be submitted to comments@lowimpacthydro.org. Requests must be received by 5:00 pm Eastern time April 11, 2018.

September 22, 2017 – On August 25, 2017, the Low Impact Hydropower Institute (LIHI) received a complete application from Enel Green Power North America, Inc. for the Low Impact Certification of the Lowell Hydroelectric Project, FERC No. 2790, located on the Merrimack River in Massachusetts. LIHI is seeking comment on the Lowell application for certification. Comments that are directly tied to specific LIHI criteria (flows, water quality, fish passage, etc.) will be most helpful, but all comments will be considered.  Comments may be submitted to the Institute by e-mail at comments@lowimpacthydro.org with “Lowell Project Comments” in the subject line, or by mail addressed to the Low Impact Hydropower Institute, 329 Massachusetts Avenue, Suite 2, Lexington, MA 02420.  Comments must be received at the Institute on or before 5 pm Eastern time on November 22, 2017 to be considered.  All comments will be posted to the web site and the applicant will have an opportunity to respond.  Any response will also be posted.