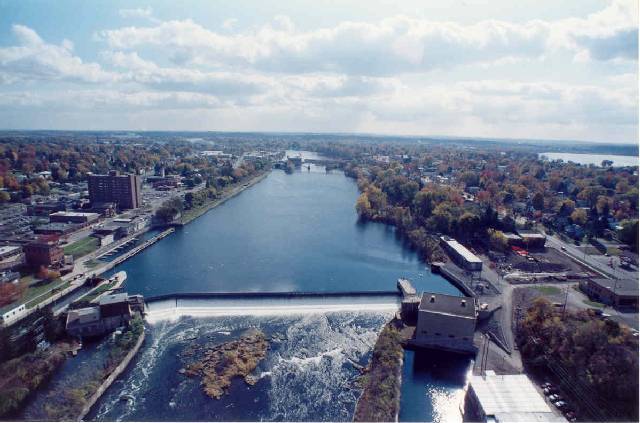 The Oswego River is formed at the confluence of the Seneca and Oneida rivers and flows north approximately 23 river miles to Lake Ontario. The Oswego River first flows through the Lock 1 dam impoundment at the Phoenix Project (FERC No. 4113). The water flow then enters the Oswego Falls impoundment formed by the Upper Fulton Dam (Lock 2, River Mile 12.6). The upstream most development of the Oswego River Project (LIHI #35B) is located about 0.7 miles downstream.

The dam at Oswego Falls has a weir section and a spillway section for overflow, equipped with a 1.5-foot-high pneumatic flashboard system installed and maintained by the project owner. To the west of the weir section, there are six Tainter gates which allow lowering of the impoundment. The Oswego Falls West development is located on the left bank (looking downstream), and the Oswego Falls East development is located on the opposite (right) bank. Oswego Falls East powerhouse contains three vertical Francis-type turbine-generators with a combined capacity of 4.5 MW, and Oswego Falls West powerhouse contains four turbine-generator units with a combined capacity of 2,860 KW. There is a bypassed reach in the center of the river, bounded by both powerhouse and intake structures.

The project operates in a modified run-of-river mode and impounds a 580-acre reservoir. The modified operational mode allows for 0.5-foot impoundment fluctuation. The project provides bypass reach flows of 236 cfs with 70 cfs released at the East development and 166 cfs through the No.1 Tainter gate. These flows are designed to protect and enhance riffle habitat per consultation with New York State Department of Environmental Conservation (NYSDEC) and US Fish and Wildlife Service (USFWS). The project also coordinates river releases and flow events with the other river stakeholders to ensure proper stewardship of the river.

The project lands are located in a heavily urbanized area with impervious surfaces and residential/commercial development surrounding the project boundary. The shoreline does not exhibit any lands of significant ecological value and are outside of project ownership.

The project area does not house any cultural or historic resources although project facilities are old enough to be considered for listing on the National Register of Historic Places. Consultation with the New York State Historic Preservation Office determined that project operations would not impact any listed properties or properties eligible for listing.

Recreational resources near the project include handicap-accessible fishing and river viewing areas. Public access is provided free of charge.

2022: No adverse material changes or compliance issues were identified. The project remains in compliance based on the annual review. The project reported installation of new trashracks along with a portion of the minimum flow (70 cfs) relocated from Tainter Gate 1 to a new notch cut into the east wall of Oswego West’s forebay. A downstream fish passage consisting of a plunge pool and 42″ pipe terminating in the bypassed reach was also constructed.

May 1, 2018 – On April 27, 2018, the Low Impact Hydropower Institute (LIHI) preliminarily approved the Oswego Falls Project for a new 5-year term of Low Impact Certification. The reviewer’s report is attached at the bottom of this page. This decision is preliminary pending the 30-day appeal window. Only those who commented in the initial application 60-day comment period are eligible to file an appeal. Such appeal needs to include an explanation as to how the project does not meet the LIHI criteria. Appeal requests can be submitted to comments@lowimpacthydro.org. Requests must be received by 5 pm Eastern time on May 31, 2018.  If no appeal requests are received and the decision becomes final, the new term for the Oswego Falls Project will be December 7, 2017 through December 6, 2022.

January 2, 2018: The Low Impact Hydropower Institute has received a complete application for a new term of Low Impact Certification for the Oswego Falls Hydroelectric Project. The Oswego Falls Project is located on the Oswego River in the city of Fulton, Oswego County, New York. The 2017 application materials can be found below. LIHI is seeking public comment on this application. Specifically, we are interested in knowing whether you think the Oswego Falls project meets the LIHI Low Impact Certification Criteria, as revised in the 2nd Edition Handbook released in March 2016. Please review the program and criteria in LIHI’s revised Handbook and then review the Project’s 2017 application materials posted on the project page. Comments that are directly tied to specific LIHI criteria (flows, water quality, fish passage, etc.) will be most helpful, but all comments will be considered. Comments may be submitted to the Institute by e-mail at comments@lowimpacthydro.org with͞ Oswego Falls Comments in the subject line, or by mail addressed to the Low Impact Hydropower Institute, 329 Massachusetts Avenue, Suite 2, Lexington, MA 02420. Comments must be received at the Institute on or before 5 pm Eastern time on March 3, 2018 to be considered. All comments will be posted to the web site and the applicant will have an opportunity to respond. Any response will also be posted.

October 12, 2017: The Oswego Falls Hydroelectric Project has been granted an extension of the current term through June 30, 2018.

January 16, 2013:  Erie Boulevard Hydropower, L.P. has submitted an application for recertification of the Oswego Falls and Oswego River Projects.

July 3, 2008: The Oswego Falls and Oswego River Projects have been certified as low impact for a five year term, effective December 7, 2007 and expiring December 7, 2012.

December 7, 2007: Erie Boulevard Hydropower, L.P. has submitted an application for certification of the Oswego Falls and Oswego River Projects. A public comment period will be open for 60 days; all comments must be received by February 7, 2008.