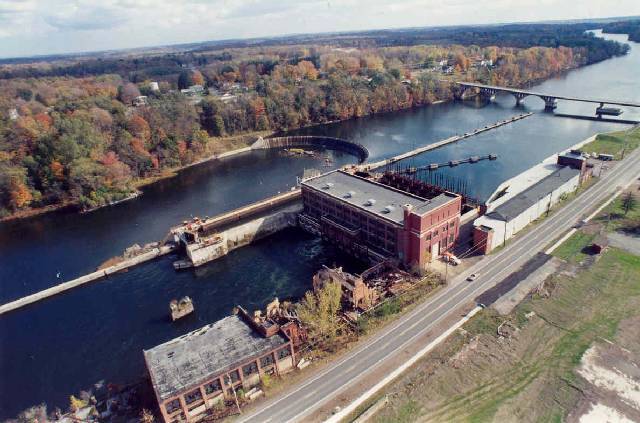 The project operates in a modified run-of-river mode that limits impoundment fluctuations. The developments provide bypass flows which vary seasonally, ranging from 200-800 cfs. These flows protect riffle habitat for reproduction of macroinvertebrates, minnows, and darters. This also supports walleye spawning and resident fish species as approved by the US Fish and Wildlife Service (USFWS).

Waters within the project reach are designated as Class B, suited for fish propagation and survival as well as primary contact recreation. The river reach is also listed as impaired for PCB contamination due to previous industrial discharges. New York Department of Environmental Conservation (NYSDEC) has confirmed that the project is not contributing to this impairment. The waters are designated as Class C from the Varick impoundment to the confluence with Lake Ontario. This region is heavily urbanized with significant industrial activity.

This region of the Oswego River is home to a variety of warm-cool water and cold-water species, including largemouth bass, white perch, walleye, channel catfish, northern pike, yellow perch, bluegill, American eel, and black and white crappie. The project owner installs seasonal upstream eel passage from June 15 through September 15 at each developments. The eelways consist of an 18-inch-wide open channel with 1.5-inch diameter by 5-inch-long PVC tubes anchored to the channel floor in a diagonal pattern and attached directly to the spillway or powerhouse wall. One-inch trashrack overlays are installed at the developments from May 1st – November 30th and minimum flows in the bypass reaches provide downstream passage.

The project lands are located in heavily urbanized areas with impervious surfaces and residential/commercial development surrounding the Oswego River and each of the developments. The shorelines and lands within the project boundary do not have any significant ecological value.

Though there are limited historical resources in the project area, a cultural resources management plan was implemented at the project. The plan primarily addresses the mitigation of impacts to historic or archaeological resources during any ground-disturbing activities. Annual reports are submitted regarding any such activities during the prior year.

Recreational resources at the project include fishing access, walkways/paths, a canoe portage trail, and boat launch. The project owner also donated land and provided funding to the nearby West Side Linear Park to develop more recreational opportunities in the area. Public access is provided free of charge.

Condition 1: The Owner shall provide an annual summary report along with its annual compliance letter to LIHI, describing operational experience with river flows and reservoir levels over the past year, any significant flow events that occurred leading to any FERC-reportable deviations from flow requirements at the Oswego River Project, any collaboration with other river users, and any agency consultation and corrective actions taken in the ongoing efforts to reduce flow excursions at the Project which may be due to factors beyond the Owner’s control.

2022: No material changes or compliance issues were identified. The project remains in compliance based on the annual review. For Condition 1, the project reported on ongoing collaboration with the Oswego River Users Group, and reported no operational deviations.

2021: There were no reported changes or compliance issues.  The project remains in compliance based on the annual review. For Condition 1, the project reported on ongoing collaboration with the Oswego River Users Group, and summarized three transmission- related and low flow deviations, none of which were FERC violations.

2020: There were no reported changes or compliance issues.  The project remains in compliance based on the annual review. For Condition 1, the project reported on ongoing collaboration with the Oswego River Users Group, and summarized three mechanical malfunction/low flow deviations, none of which were FERC violations.

2019: There were no reported changes or compliance issues.  The project remains in compliance based on the annual review. For Condition 1, the project reported on ongoing collaboration with the Oswego River Users Group, and summarized one low flow deviation, not a FERC violation.

2018: There were no reported compliance issues. A change was reported for modifications to the flashboards at the Varick development to better spread minimum bypass flows between the west and east sides of the dam.  The project remains in compliance based on the annual review. For Condition 1, the project reported on ongoing collaboration with the Oswego River Users Group regarding communications and coordinated flows, and summarized three storm-related and low flow deviations, none of which were FERC violations.

May 1, 2018 – On April 27, 2018, the Low Impact Hydropower Institute (LIHI) preliminarily approved the Oswego River Project for a new 5-year term of Low Impact Certification. The reviewer’s report is attached at the bottom of this page. This decision is preliminary pending the 30-day appeal window. Only those who commented in the initial application 60-day comment period are eligible to file an appeal. Such appeal needs to include an explanation as to how the project does not meet the LIHI criteria. Appeal requests can be submitted to comments@lowimpacthydro.org. Requests must be received by 5 pm Eastern time on May 31, 2018. If no appeal requests are received and the decision becomes final, the new term for the Oswego River Project will be December 7, 2017 through December 6, 2022.

January 2, 2018: The Low Impact Hydropower Institute has received a complete application for a new term of Low Impact Certification for the Oswego River Hydroelectric Project. The Oswego River Project is located along the Oswego River in Oswego County, New York. The 2017 application materials can be found below. LIHI is seeking public comment on this application. Specifically, we are interested in knowing whether you think the Oswego River project meets the LIHI Low Impact Certification Criteria, as revised in the 2nd Edition Handbook released in March 2016. Please review the program and criteria in LIHI’s revised Handbook and then review the Project’s 2017 application materials posted on the project page. Comments that are directly tied to specific LIHI criteria (flows, water quality, fish passage, etc.) will be most helpful, but all comments will be considered. Comments may be submitted to the Institute by e-mail at comments@lowimpacthydro.org with͞ Oswego River Comments in the subject line, or by mail addressed to the Low Impact Hydropower Institute, 329 Massachusetts Avenue, Suite 2, Lexington, MA 02420. Comments must be received at the Institute on or before 5 pm Eastern time on March 3, 2018 to be considered. All comments will be posted to the web site and the applicant will have an opportunity to respond. Any response will also be posted.

October 12, 2017: The Oswego River Hydroelectric Project has been granted an extension of the current term through June 30, 2018.

January 16, 2013:Erie Boulevard Hydropower, L.P. has submitted an application for recertification of the Oswego Falls and Oswego River Projects.

July 3, 2008: The Oswego Falls and Oswego River Projects have been certified as low impact for a five year term, effective December 7, 2007 and expiring December 7, 2012.

December 7, 2007: Erie Boulevard Hydropower, L.P. has submitted an application for certification of the Oswego Falls and Oswego River Projects. A public comment period will be open for 60 days; all comments must be received by February 7, 2008.