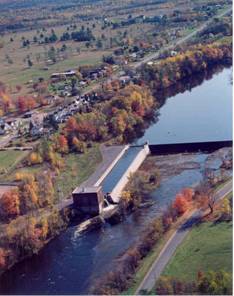 The Middle Raquette River Project is located on the Raquette River in St. Lawrence County, New York. The Raquette River has a total drainage basin of 1,269 square miles at its mouth and originates in the Adirondack highlands at Blue Mountain Lake, Raquette Lake and Long Lake. The river flows generally north-northwest for more than 146 miles, through Potsdam, New York, and empties into the St. Lawrence River, near Massena, New York. Historically, the river has been developed for waterpower for sawmills, paper mills, tanneries, and other industry.

The project operates in re-regulating and pulsing modes. Operations are coordinated with the owner’s other projects on the Raquette River. The Project’s most upstream development, Higley, operates as a re-regulating development to provide steadier inflows from upstream to the downstream hydroelectric facilities. Each of the developments below Higley operates in a pulsing mode that limits the normal reservoir fluctuation at Colton and Hannawa to no more than 0.4 feet, and at Sugar Island to no more than 1.0 foot. Each development generates when total inflow is available to pass the minimum bypass flow plus run one turbine at its minimum turbine limit. Minimum flows are provided at each development:

Waters within the project reach are designated as Class C, managed to achieve and maintain a level of quality that fully support aquatic biota, wildlife, aquatic habitat, swimming and other primary contact recreation, boating, fishing, and other recreational uses. There are no impaired waters in the project reach.

No anadromous or catadromous fish species are present in the river reach. The downstream Lower Raquette River Project has installed upstream passage for the catadromous American eel but resource agencies have not yet prescribed such measures at this project. Downstream fish passage is provided via the aforementioned minimum flow structures in the development dams. Trashracks with 1-inch bar spacing are installed at the developments except Sugar Island, as the far larger instream flow empties into a plunge pool with adequate depth for fish protection.

The project lands consist of 406 acres. The overbank areas of the Middle Raquette River located between the project developments are comprised of natural lands of non-significant ecological value. Land around the project is largely rural or forested and is dependent on forestry, some agriculture, wood products, and tourism.

Threatened or endangered species potentially present in the project vicinity include the Northern long-eared bat, yellow lampmussel, common loon, spruce grouse, and several migratory birds as identified by US Fish and Wildlife Service (USFWS). No critical habitat was identified in the project area for the Northern long-eared bat and the only migratory bird found at the project year-round is the bald eagle, of which no critical habitat is located at the project. The project supports some habitat for the spruce grouse though it is at the southernmost extent of the species range. USFWS and New York State Department of Environmental Conservation surveyed the project area for yellow lampmussel and determined that the population was larger than previously thought.

The foundation of an early tanning factory is located downstream of the Colton dam between the bypass reach and a hiking trail. The tannery was of particular importance to the local economy when it operated between 1856 and 1898. The State Historic Preservation Office (SHPO) was consulted to determine other potential historic properties. The SHPO concluded that the Higley development met eligibility requirements for listing on the National Register of Historic Places. A historic properties management plan was developed for the project to provide guidance and provisions for the proper stewardship of these resources.

Public access is provided free of charge and recreational resources at the project include canoe portages at each development and:

2022: No material changes or compliance issues were identified. The project remains in compliance based on the annual review.  For Condition 1, the project reported one impoundment level deviation (no FERC response yet) and one planned impoundment drawdown, not considered a FERC violation.

2021: There were no reported changes or compliance issues. The project remains in compliance based on the annual review.  For Condition 1, the project reported one impoundment level deviation not considered a FERC violation.

2020: There were no reported changes or compliance issues. The project remains in compliance based on the annual review.  For Condition 1, the project reported no deviations.

January 6, 2020: The Low Impact Hydropower Institute has preliminarily approved Low Impact Recertification for the Middle Raquette Hydroelectric Project, LIHI #14B.  This decision is preliminary pending the 30-day appeal window. Only those who commented on the initial application during the 60-day comment period are eligible to file an appeal. Such appeal needs to include an explanation as to how the Project does not meet the LIHI criteria. Appeal requests can be submitted by email to comments@lowimpacthydro.org with “Middle Raquette Hydroelectric Project” in the subject line, or by mail addressed to the Low Impact Hydropower Institute, 329 Massachusetts Ave, Suite 6, Lexington, MA 02420. All requests will be posted to the website.  The applicant will have an opportunity to respond and any response will also be posted. Requests must be received by 5 pm Eastern time on February 5, 2020.  The full application and reviewers report are available below. If no appeal requests are received and the decision becomes final, the Certification term for the Project will be from July 9, 2019 to July 8, 2024.

August 13, 2019: The Low Impact Hydropower Institute has received a complete application for Low Impact Recertification of the Middle Raquette Hydroelectric Project.  LIHI is seeking public comment on this application.  Specifically, we are interested in knowing whether you think the Project meets the LIHI Low Impact Certification Criteria, as revised in the 2nd Edition Handbook.  Please review the program and criteria in LIHI’s revised Handbook and then review the Project’s application materials below. Comments that are directly tied to specific LIHI criteria (flows, water quality, fish passage, etc.) will be most helpful, but all comments will be considered.  Comments may be submitted to the Institute by e-mail at comments@lowimpacthydro.org with “Middle Raquette Project Comments” in the subject line, or by mail addressed to the Low Impact Hydropower Institute, 329 Massachusetts Avenue, Suite 6, Lexington, MA 02420.  Comments must be received on or before 5 pm Eastern time on October 12, 2019 to be considered.  All comments will be posted to the web site and the applicant will have an opportunity to respond.  Any response will also be posted.

May 15, 2015: The Middle Raquette River Hydroelectric Project has been certified for a third term of low impact certification, effective July 9, 2014 and expiring July 9, 2019, with the following conditions:

In rendering this Certification, the Institute’s Executive Director used authority delegated by the LIHI Governing Board and a full review of the Application Reviewer’s report (available in the Files section below) and all public comments and additional materials provided by the Applicant.

May 12, 2014: The Low Impact Hydropower Institute received an application for a third term of certification of the Raquette River Project. The current certificate term is set to expire on July 9, 2014, but to allow time for public comment and internal review, the term has been extended to August 30, 2014.