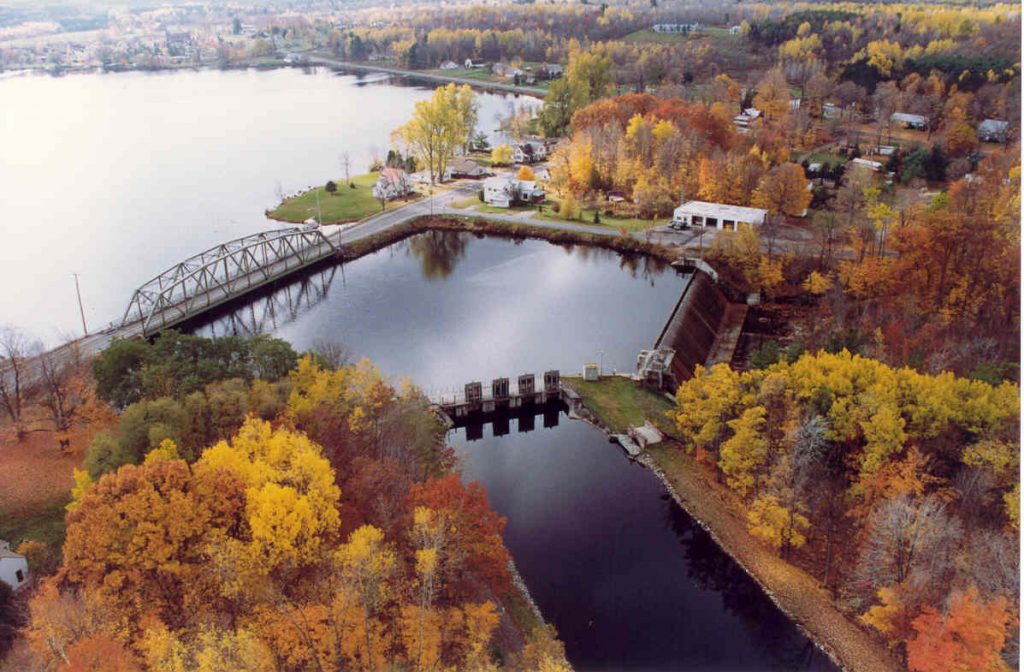 The Lower Raquette River Project is located on the Raquette River in St. Lawrence County, New York. The Raquette River has a total drainage basin of 1,269 square miles at its mouth and originates in the Adirondack highlands at Blue Mountain Lake, Raquette Lake and Long Lake. The river flows generally north-northwest for more than 146 miles, through Potsdam, New York, and empties into the St. Lawrence River, near Massena, New York. Historically, the river has been developed for waterpower for sawmills, paper mills, tanneries, and other industry.

The project is comprised of four developments: Norwood, East Norfolk, Norfolk, and Raymondville. Raymondville is the first dam on the river. The developments were constructed in 1928 for the sole purpose of power generation.

The project operates in a run-of-river mode. From 2002 to about 2007, the project developments were operated in a pulsing mode. The normal reservoir fluctuation was limited to no more than 0.5 foot at the Norwood, East Norfolk, and Raymondville developments and no more than 1.0 foot at the Norfolk development. As subsequently modified in 2006 the operation of all the developments was changed from a pulsing mode to a run-of-river mode. This mode of operation targets a normal maximum fluctuation limit of 0.2 feet below the dam crest or top of flashboards. However, up to 0.5 feet of impoundment fluctuation is allowed before an impoundment level deviation notification to the New York State Department of Environmental Conservation (NYSDEC) and the Federal Energy Regulatory Commission (FERC) is warranted. This mode maintains reservoir levels at or near the top of the dam crest or top of flashboard.

Minimum flows are provided at each of the developments and were developed based on a Delphi study. The flow volumes and periodicity at each development were intended to support multiple resource agency management objectives that prioritized restoration of walleye spawning and incubation as the top priority, fish movement, restoration of benthic invertebrate and forage fish production, riparian and wetland production, aesthetics, safety, and water quality. In reaches where little improvement could be made the flow volumes were kept minimal. In reaches where significant benefits were expected, larger volumes and/or longer periods of seasonal flows were established.

Waters within the project reach are designated as Class C. These waters are managed to achieve and maintain a level of quality that fully support aquatic biota, wildlife, aquatic habitat, swimming and other primary contact recreation, boating, fishing, and other recreational uses. NYSDEC has not identified any impaired waters in the project reach. The project voluntarily built and installed invasive species disposal stations in accordance with NYSDEC design at each development’s boat launch to mitigate the spread of the invasive Eurasian Watermilfoil species. The milfoil species is typically carried from one waterbody to another via recreational boats, kayaks, and canoes.

Upstream passage is provided at the developments for American eel, a catadromous species. An eel passage plan was developed through consultation with the US Fish and Wildlife Service (USFWS) and NYSDEC. The eel passage facilities consist of 18-inch-wide aluminum flumes with solid bottoms, installed with a maximum slope of 45 degrees, one-foot-wide aluminum troughs to convey attraction flows, pumps, and siphons to provide attraction and ladder flows, removable cover plates at East Norfolk, Norfolk, and Raymondville and substrate liners in the flumes. Siphon pipes are used to supply attraction flows of 120 gallons per minute (GPM) and pumps provide 20 GPM into the ladders. The ladders are hinged in the lower sections to prevent damage during high flows, ice and from other debris impacts. Downstream passage for river species is provided via the minimum flow releases at each development. Resident river fish species include a diverse group of game and pan fish. NYSDEC manages the river as a mixed cool-water/warm-water fishery. The most abundant species are walleye, smallmouth bass, northern pike, yellow perch, rock bass, pumpkinseed, and brown bullhead. Trashracks with 1-inch spacing at the developments mitigate the potential for entrainment.

Threatened or endangered species potentially present in the project vicinity include the Northern long-eared bat, several wintering migratory birds, bald eagle, yellow lampmussel, lake sturgeon, and downy phlox as identified through consultation with NYSDEC. No critical habitat has been identified in the project area for the listed bird species as noted by USFWS. Populations of yellow lampmussel have been determined to be healthy and run-of-river operations mitigate any potential project impact on the species. Similarly, lake sturgeon populations are not expected to be adversely impacted due to project run-of-river operations. Consultation with NYSDEC and USFWS noted presence of downy phlox in an undisclosed location near one development but concluded that operations would not impact the species.

The project was constructed in 1928 but no structures at the developments meet the criteria for listing on the National Register of Historic Places. Additionally, no properties of indigenous religious or cultural significance were identified in the project area despite the close proximity of the project to the St. Regis Mohawk Tribe’s reservation downstream.

Public access is provided free of charge and recreational resources at the project include:

January 6, 2020: The Low Impact Hydropower Institute has preliminarily approved Low Impact Recertification for the Lower Raquette Hydroelectric Project. This decision is preliminary pending the 30-day appeal window. Only those who commented on the initial application during the 60-day comment period are eligible to file an appeal. Such appeal needs to include an explanation as to how the Project does not meet the LIHI criteria. Appeal requests can be submitted by email to comments@lowimpacthydro.org with “Lower Raquette Hydroelectric Project” in the subject line, or by mail addressed to the Low Impact Hydropower Institute, 329 Massachusetts Ave, Suite 6, Lexington, MA 02420. All requests will be posted to the website.  The applicant will have an opportunity to respond and any response will also be posted. Requests must be received by 5 pm Eastern time on February 5, 2020.  The full application and reviewers report are available below. If no appeal requests are received and the decision becomes final, the Certification term for the Project will be from July 9, 2019 to July 8, 2024.

August 13, 2019: The Low Impact Hydropower Institute has received a complete application for Low Impact Recertification of the Lower Raquette Hydroelectric Project.  LIHI is seeking public comment on this application.  Specifically, we are interested in knowing whether you think the Project meets the LIHI Low Impact Certification Criteria, as revised in the 2nd Edition Handbook.  Please review the program and criteria in LIHI’s revised Handbook and then review the Project’s application materials below. Comments that are directly tied to specific LIHI criteria (flows, water quality, fish passage, etc.) will be most helpful, but all comments will be considered.  Comments may be submitted to the Institute by e-mail at comments@lowimpacthydro.org with “Lower Raquette Project Comments” in the subject line, or by mail addressed to the Low Impact Hydropower Institute, 329 Massachusetts Avenue, Suite 6, Lexington, MA 02420.  Comments must be received on or before 5 pm Eastern time on October 12, 2019 to be considered.  All comments will be posted to the web site and the applicant will have an opportunity to respond.  Any response will also be posted.

May 15, 2015: The Lower Raquette River Hydroelectric Project has been certified for a third term of low impact certification, effective July 9, 2014 and expiring July 9, 2019, with the following conditions:

In rendering this Certification, the Institute’s Executive Director used authority delegated by the LIHI Governing Board and the unanimous recommendation by the LIHI Governing Board Technical Committee resulting from a full review of the Application Reviewer’s report (available in the Files section below) and all public comments and additional materials provided by the Applicant.

May 12, 2014: The Low Impact Hydropower Institute received an application for a third term of certification of the Raquette River Project. The current certificate term is set to expire on July 9, 2014, but to allow time for public comment and internal review, the term has been extended to August 30, 2014.