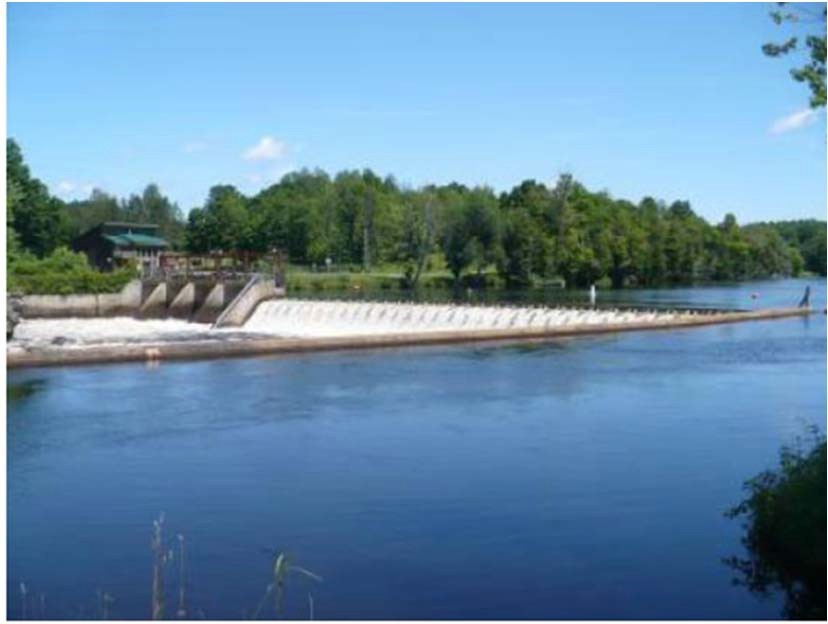 The Yaleville Project is located on the Raquette River near the Town of Yaleville in Franklin and St. Lawrence Counties in New York. The Project was originally constructed in 1903 for the sole purpose of power production. Several improvements were made to the project throughout the 1900s. This included a new concrete flume in 1919; a concrete dam replaced the log dam and water wheels were replaced with the current hydropower equipment; a new powerhouse was constructed in 1922; the forebay was constructed and the turbine room floor was overlaid in 1977; the spillway and canal walls were reconstructed in 1978; the tailrace stop log structure and tailrace were repaired in 1982; and concrete repairs were made to the dewatering facilities. These upgrades culminated in 1987 with the installation of new head gates and a head gate lifting frame at the project intake.

The Raquette River has a total drainage basin of 1,269 square miles at its mouth and originates in the Adirondack highlands at Blue Mountain Lake, Raquette Lake and Long Lake. The river flows generally north-northwest for more than 146 miles, through Potsdam, New York, and empties into the St. Lawrence River, near Massena, New York.

The project includes a dam, flood gate structure, bypassed reach, intake structure, forebay, powerhouse, and two generating units.
The dam is a concrete gravity overflow dam about 170 feet long and 13 feet high, with 1.5-foot-high flashboards at the crest, a concrete gravity flood gate structure 75 feet long and composed of four stanchion bays, 15 feet long and 10 feet high. Each stanchion bay has a central I-beam support creating two 7.5 ft bays for a total of 8 bays. Each individual bay has 10 ft of horizontal timber stoplogs topped with a 5 ft high steel slide gate A bypassed reach, approximately 485 feet long, is created by the dam. Water is conveyed to the intake via a forebay (canal) that is 60 feet wide and 275 feet long. The intake structure is integral to the upstream side of the powerhouse. The powerhouse contains two vertical Francis units with a combined capacity of 0.725 MW.

The project is operated in a run-of-river mode and impounds a 95-acre reservoir that extends approximately 1.8 miles upstream. Fishway flows are maintained at 36 cfs after spring runoff and flashboards are reinstalled (around May 15 annually) until November 1. Impoundment fluctuations are monitored by the project owner and operational adjustments are made to ensure run-of-river compliance. This flow regime was developed via recommendations from US Fish and Wildlife Service (USFWS) to preserve suitable aquatic habitat for resident fish species. The New York State Department of Environmental Conservation (NYSDEC) manages the Raquette River as a mixed warm-water/cool-water fishery resource.

Waters in the project reach are designated as Class B, managed for high quality aquatic habitat and primary and secondary contact recreation. The project reach is also listed as impaired for pathogens and exhibits low dissolved oxygen concentrations. The pathogen impairment is caused by poorly operated wastewater treatment plants in nearby municipalities. Low dissolved oxygen levels have been exhibited in the river since the 1940s but have been steadily improving. The project’s turbine hydraulic capacity frequently allows for spillway flows which help to aerate waters moving downstream.

NYSDEC manages the Raquette River as a mixed warm-water/cool-water fishery. The fish population is comprised of both game and pan fish including walleye, smallmouth bass, northern pike, yellow perch, rock bass, pumpkinseed, and brown bullhead. Historical records of anadromous fish presence have not been found for the project vicinity. Migratory species within the project reach include American eel. An upstream eel ladder operates between June 15 and September 15 as recommended by USFWS and NYSDEC. Additionally, a rectangular weir downstream fishway is operated from May 15 (after spring runoff and flashboard installation) through November 1. The fishway discharges 36 cfs into a 3-ft deep plunge pool. Trashracks with 1-inch spacing mitigate entrainment of resident species.

The project lands consist of roughly 14 acres. The surrounding lands are primarily rural, agricultural, and forested. The shoreline is predominantly shrub land and no lands of significant ecological value exist in the project area. The project’s run-of-river operations help to minimize impoundment fluctuation and thus reduce the potential for shoreline erosion.

Threatened or endangered species potentially present in the project vicinity include the Northern long-eared bat and bridle shiner. No critical habitats are located in the project area and the project operates under the USFWS 4(d) rule concerning Northern long-eared bat protection. This rule primarily concerns the cutting of trees, potential habitat for the bat species, from June 1 through July 31. The bridle shiner, a small minnow species, has been documented in the upstream vicinity of the project and is a state species of conservation concern.

Recreational resources at the project include a canoe portage route with picnic area, parking, signage, and upstream and downstream put-ins/take-outs. Public access is provided free of charge where safe.

August 13, 2019: The decision to certify the Yaleville Hydroelectric Project is final. No appeals were received during the appeal period which closed on August 9, 2019. The new certification term for the Project is from April 26, 2019 through April 25, 2024.

This decision is preliminary pending the 30-day appeal window. Only those who commented on the initial application during the 60-day comment period are eligible to file an appeal. Such appeal needs to include an explanation as to how the Project does not meet the LIHI criteria. Appeal requests can be submitted by email to comments@lowimpacthydro.org with “Yaleville Hydroelectric Project” in the subject line, or by mail addressed to the Low Impact Hydropower Institute, 329 Massachusetts Ave, Suite 6, Lexington, MA 02420. All requests will be posted to the website.  The applicant will have an opportunity to respond and any response will also be posted. Requests must be received by 5 pm Eastern time on August 9, 2019.  The full application and reviewers report are available below.

If no appeal requests are received and the decision becomes final, the Certification term for the Project (pending LIHI #157) will be April 26, 2019 for a term of five (5) years, which will expire on April 25, 2024.

May 1, 2019: The Low Impact Hydropower Institute has received a complete application for Low Impact Certification of the Yaleville Hydroelectric Project.  LIHI is seeking public comment on this application.  Specifically, we are interested in knowing whether you think the Project meets the LIHI Low Impact Certification Criteria, as revised in the 2nd Edition Handbook.  Please review the program and criteria in LIHI’s revised Handbook and then review the Project’s application materials below.

Comments that are directly tied to specific LIHI criteria (flows, water quality, fish passage, etc.) will be most helpful, but all comments will be considered.  Comments may be submitted to the Institute by e-mail at comments@lowimpacthydro.org with “Yaleville Project Comments” in the subject line, or by mail addressed to the Low Impact Hydropower Institute, 329 Massachusetts Avenue, Suite 6, Lexington, MA 02420.  Comments must be received on or before 5 pm Eastern time on June 30, 2019 to be considered.  All comments will be posted to the web site and the applicant will have an opportunity to respond.  Any response will also be posted.