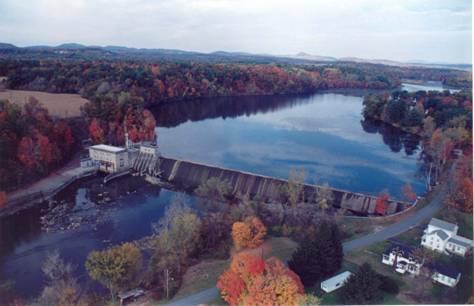 The Hoosic River Project consists of two developments on the Hoosic River east of its confluence with the Hudson River: the Johnsonville Development and the Schaghticoke Development, located in Johnsonville and Schaghticoke, Rensselaer County, New York, respectively. The Valley Falls Dam is located between the developments. One dam lies upstream of the project, the Hoosick Falls Project, with no dams downstream of the Schaghticoke facility. The facilities were built between 1909 and 1910 for the purpose of supplying power to the local area.

The Johnsonville Development consists of:

The Schaghticoke Development consists of:

The canal, forebay, pipeline, and penstocks create a two-mile bypassed reach between the dam and the powerhouse.

Waters within the project reach are designated Class B in the Hoosic River and Class C in the Schaghticoke Reservoir. Class B waters are best used for aquatic biota and wildlife habitat as well as primary and secondary contact recreation. Class C waters have similar designated uses, but some factors may limit the designated uses. A fish consumption advisory is in effect in the project area due PCB contaminated sediments. This impairment has been noted by NYSDEC as a result of legacy pollutants from past industrial discharges into the river upstream of the project and thus not a result of project operations.

Historically, the falls at Schaghticoke limited upstream movements for most anadromous fish species in the river. However, USFWS indicated that there are sufficient ledges, cracks and flumes in the falls to likely allow American eel to ascend them. In general, the Hoosic River in the Project area supports both warm and coldwater fish species, but the fish community is dominated by warmwater species. Common species include shiner, spottail shiner, golden shiner, fallfish, carp, white sucker, rainbow and brown trout, northern pike, largemouth and smallmouth bass, rock bass, black crappie, pumpkinseed, bluegill, and yellow perch. Both project facilities operate eel ladders between June 15 and September 15 to facilitate eel migration. The eel ladder systems, developed with USFWS and NYSDEC, use a gravity siphon pump and a solar-powered pump to facilitate passage. Downstream passage is available at Johnsonville via the 20-cfs bypass flow leading to a plunge pool. Schaghticoke’s 60-cfs bypass flow provides passage as well.

The project lands consist of 1,066.3 acres across the two facilities (696.3 acres at Johnsonville, 370 acres at Schaghticoke). Project lands at the Johnsonville development are primarily forested, low-density developed, or open space. Schaghticoke lands are limited primarily to the power facilities and some forested areas. No lands of significant ecological value exist in these areas.

Threatened or endangered species potentially present in the project vicinity include bald eagle, Karner blue butterfly, and Provancher’s fleabane. Surveys conducted at the project’s concluded that the Karner blue butterfly or its host species, the blue lupine, are not found in the project area and not likely to be adversely impacted by project operations. Further, review of the NYSDEC’s Environmental Resource Mapper and the Environmental Assessment Form Mapper found that bald eagles may use the Johnsonville development for access to food and potentially to overwinter. However, operational and recreational measures do not affect the distribution or abundance of prey and no impacts on the species are expected. The Provancher’s fleabane may be found in the Schaghticoke vicinity though only in the bypass reach, if at all. The species grows on cliffs along the Hudson river and seasonally exposed bedrock of large rivers, more specifically in rocky crevices along rivers and streams where it can receive splashed water. NYSDEC only noted the presence of bald eagles in the project vicinity and does not expect any impact on the listed species.

The Schaghticoke development’s turbines, generators, dam, gates, and powerhouse are eligible for listing on the National Register of Historic Places as an example of early 20th century hydroelectric generation. The New York State Historic Preservation Office (SHPO) has noted that project operations will not impact cultural or historic resources at the project. The project owner submits annual reports to the SHPO summarizing activities relevant to the resources at the project.

Recreational resources at the project include fishing access, a car-top boat launch, canoe portage and put-in/take-out locations, whitewater releases based on annual attendance (in collaboration with American Whitewater), and an Americans with Disabilities Act compliant fishing platform. Public access is provided free of charge where safety and private property do not preclude access.

The Certificate includes the following conditions:

December 3, 2019: The Low Impact Hydropower Institute has preliminarily approved Low Impact Recertification for the Hoosic River Hydroelectric Project, LIHI #13. This decision is preliminary pending the 30-day appeal window. Only those who commented on the initial application during the 60-day comment period are eligible to file an appeal. Such appeal needs to include an explanation as to how the Project does not meet the LIHI criteria. Appeal requests can be submitted by email to comments@lowimpacthydro.org with “Hoosic River Hydroelectric Project” in the subject line, or by mail addressed to the Low Impact Hydropower Institute, 329 Massachusetts Ave, Suite 6, Lexington, MA 02420. All requests will be posted to the website.  The applicant will have an opportunity to respond and any response will also be posted. Requests must be received by 5 pm Eastern time on January 2, 2020.  The full application and reviewers report are available below.

If no appeal requests are received and the decision becomes final, the Certification term for the Project will be from July 9, 2019 to July 8, 2024.

September 4, 2019: The Low Impact Hydropower Institute has received a complete application for Low Impact Recertification of the Hoosic River Hydroelectric Project.  LIHI is seeking public comment on this application.  Specifically, we are interested in knowing whether you think the Project meets the LIHI Low Impact Certification Criteria, as revised in the 2nd Edition Handbook.  Please review the program and criteria in LIHI’s revised Handbook and then review the Project’s application materials below.

Comments that are directly tied to specific LIHI criteria (flows, water quality, fish passage, etc.) will be most helpful, but all comments will be considered.  Comments may be submitted to the Institute by e-mail at comments@lowimpacthydro.org with “Hoosic River Project Comments” in the subject line, or by mail addressed to the Low Impact Hydropower Institute, 329 Massachusetts Avenue, Suite 6, Lexington, MA 02420.  Comments must be received on or before 5 pm Eastern time on November 3, 2019 to be considered.  All comments will be posted to the web site and the applicant will have an opportunity to respond.  Any response will also be posted.

February 20, 2015 – The Hoosic River Hydroelectric Project (FERC No. 2616), LIHI Certificate No. 13 has been determined by the Executive Director, Michael J. Sale to satisfy the requirements of the Low Impact Hydropower Institute (LIHI) Certification Program. The Hoosic River Project is located on the Hoosic River in upstate New York, northeast of Albany and Troy.

In rendering this Certification, the Institute’s Executive Director used authority delegated by the LIHI Governing Board and the unanimous recommendation by the LIHI Governing Board Technical Committee resulting from a full review of the Application Reviewer’s report and all public comments and additional materials provided by the Applicant.  The decision to certify the Hoosic River Hydroelectric Project is for a 5-year term, effective July 9, 2014 and expiring July 9, 2019, with the following condition:

“The potential for ice buildup in the head pond stilling well and the hydraulic controls of the pneumatic gate on the Schaghticoke spillway is a recurring issue at the Hoosic River facility. Therefore, one new condition is added to the LIHI certificate:

April 17, 2014: The Low Impact Hydropower Institute received an application for a third term of certification of the Hoosic River Project. The current certificate term is scheduled to expire on July 9, 2014.