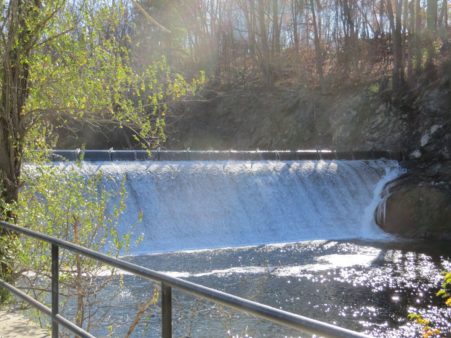 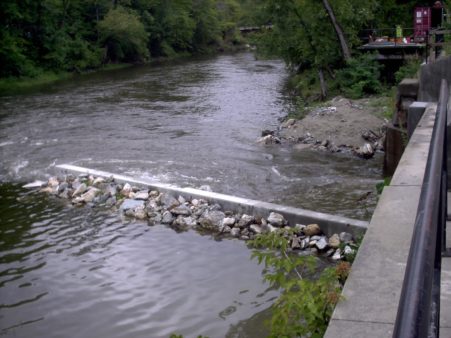 The Pownal Hydroelectric Power Project is located on the Hoosic River at the former Pownal Tannery Plant in North Pownal, Town of Pownal, Bennington County Vermont. The original facility was constructed and began operation in 1983. The first evidence of harvesting gravitational energy from the Hoosic River at this location is an eighteenth-century grist mill which was followed by a mid-nineteenth-century woolen mill. After the woolen mill burned to the ground in 1863, the site was rebuilt as the North Pownal Cotton Mill, which operated until 1930. The mill building was reopened as the Pownal Tanning Company in 1936. The tannery converted sheep and cow hides into finished leather for use in products such as shoes and coats. With decreasing demand for leather and catastrophic equipment failure Vermont’s last commercial tannery closed its doors in 1988. In 2016, the Town of Pownal and the new project owner Hoosic River Hydro, revitalized the project and took over project operations. With support from the Vermont Agency of Natural Resources (VANR), US Fish and Wildlife Service, and the Vermont State Historic Preservation Office (SHPO), the project’s capacity was increased. Rehabilitation efforts were completed in 2017 and the project became operational in November of that year.

The site is enrolled in both the EPA Superfund Program and the EPA Brownfields Program due to historical contamination. The Superfund program focused on land-based contamination and the Brownfields program focused on wetlands-based contamination at the Project. The primary remediation efforts related to the hydropower development focused on PCB-contaminated sediment upstream of the dam. As of 2017, all contaminated sediment that would be mobilized by the operation of the project has been properly removed from the site or mitigated with close oversight from the Vermont Department of Environmental Conservation (VDEC) and US Environmental Protection Agency.

The Hoosic River begins near Dalton, Massachusetts and flows northwest to Pownal, Vermont. From there, the river flows north westerly into New York where it joins the Walloomsac River, a tributary to the Hudson River. There are four hydroelectric projects located downstream of the project as well as four non-powered dams upstream. The downstream hydropower projects from upstream to downstream include part of the Hoosic River Project LIHI #13 (Johnsonville Development), the James Thompson Project (FERC No. P-6411), and the rest of the Hoosic River Project, the Schaghticoke Development.

The dam consists primarily of an ogee gravity overflow structure built in 1955. The dam is 153 feet long and has a maximum height of 18 feet. It operates with 2.5 feet of flashboards and crest gate. At the right abutment of the dam, there is an intake canal, (40-foot-long concrete overflow section) 20 feet wide and approximately 18 feet deep relative to the crest of the dam. The dam creates an approximate 200-foot-long bypassed reach. A 93-foot-long, 8-foot-diameter penstock conveys water from the forebay to the powerhouse. The wood frame powerhouse includes a WWS Wasserkraft turbine and Hitzinger induction generator pair with an installed capacity of 0.5 MW.

The project operates in an instantaneous run-of-river mode and impounds a 77-acre reservoir. The project provides a minimum flow of 56 cfs in the bypass reach as recommended by USFWS and VDEC.

PLUS-Standard: Significant improvements have been made to streamflow control relative to the size of the project. The replacement of flashboards with automated crest gates and programmable logic controllers ensures that bypass streamflow remains under control and impoundment elevation remains stable. This effort was made voluntarily at a project whose size does not typically warrant such investment.

Waters within the project reach are designated as Class B waters and listed as impaired for PCB contamination and heavy metal pollutants. Impairments are the result of past industrial activities from the Pownal Tannery Company as mentioned above and from industrial facilities upstream.

PLUS-Standard: The project owner voluntarily excavated and disposed of approximately 1,159 cubic yards of contaminated sediments from the forebay and impoundment. This toxic sediment otherwise could have been entrained by generation flow and transported downstream. The remediation has resulted in significant benefits to aquatic and riparian species and their habitats in the impoundment, bypass reach, and downstream reaches.

Downstream dams currently create barriers to upstream passage thus no migratory species are present at the project. Past industrial activities have also reduced the number of resident fish species in the area. Some species may occupy the impoundment and are free to pass downstream over the dam into the bypass reach and downstream. The project owner also voluntarily installed a trash rack with 1.25-inch spacing which, in conjunction with low approach velocities mitigates the potential for entrainment. USFWS and VDEC both support these mitigation actions.

Lands surrounding the project are primarily agricultural, residential, or forested and the run-of-river operations of the project minimize shoreline erosion. Improvements to flow control further mitigate potential for shoreline degradation. No lands of significant ecological value exist in the project area.

Threatened or endangered species potentially present in the project vicinity include the Northern long-eared bat. No critical habitats are found in the project reach thus the project has no impact on bat populations.

No cultural or historic resources are present in the project reach. Rehabilitation efforts including the replacement of flashboards, penstock, and other facilities were not found to affect historic properties. On several occasions, the Vermont Department of Historic Preservation has concluded that the project has no adverse effect on any historic sites that are eligible for or listed in the National Register of Historic Places.

Historic poor water quality diminishes the potential for recreational use of the river. While informal access is available primarily to the impoundment, fish in the vicinity of the project are not recommended for human consumption. PCBs can be absorbed through the skin, so any recreation is discouraged on or in the river. Even handling of fish can pose a health risk.

March 18, 2019: The decision to certify the Pownal Hydroelectric Project is final. No appeals were received during the appeal period which closed on March 15, 2019. The certification term for the Project is December 7, 2018 through December 6, 2028.

February 12, 2019: The Low Impact Hydropower Institute (LIHI) has preliminarily approved Low Impact Certification for the Pownal Hydroelectric Project. This decision is preliminary pending the 30-day appeal window. Only those who commented on the initial application during the 60-day comment period are eligible to file an appeal. Such appeal needs to include an explanation as to how the Project does not meet the LIHI criteria. Appeal requests can be submitted by email to comments@lowimpacthydro.org with “Pownal Hydroelectric Project” in the subject line, or by mail addressed to the Low Impact Hydropower Institute, 329 Massachusetts Ave, Suite 2, Lexington, MA 02420. All requests will be posted to the website.  The applicant will have an opportunity to respond and any response will also be posted. Requests must be received by 5 pm Eastern time on March 14, 2019.  The full application and reviewers report are available below. If no appeal requests are received and the decision becomes final, the Certification term for the Project (pending LIHI #149) will be December 7, 2018 through December 6, 2028.

December 10, 2018: The Low Impact Hydropower Institute has received a complete application for Low Impact Certification of the Pownal Hydroelectric Project (FERC No. 6795, exempt). The Project is located on the Hoosic River in the in the town of Pownal, Bennington County, Vermont.  LIHI is seeking public comment on this application.  Specifically, we are interested in knowing whether you think the Project meets the LIHI Low Impact Certification Criteria, as revised in the 2nd Edition Handbook.  Please review the program and criteria in LIHI’s revised Handbook and then review the Project’s application materials below. Comments that are directly tied to specific LIHI criteria (flows, water quality, fish passage, etc.) will be most helpful, but all comments will be considered.  Comments may be submitted to the Institute by e-mail at comments@lowimpacthydro.org with “Pownal Project Comments” in the subject line, or by mail addressed to the Low Impact Hydropower Institute, 329 Massachusetts Avenue, Suite 2, Lexington, MA 02420.  Comments must be received on or before 5 pm Eastern time on February 8, 2019 to be considered.  All comments will be posted to the web site and the applicant will have an opportunity to respond.  Any response will also be posted.