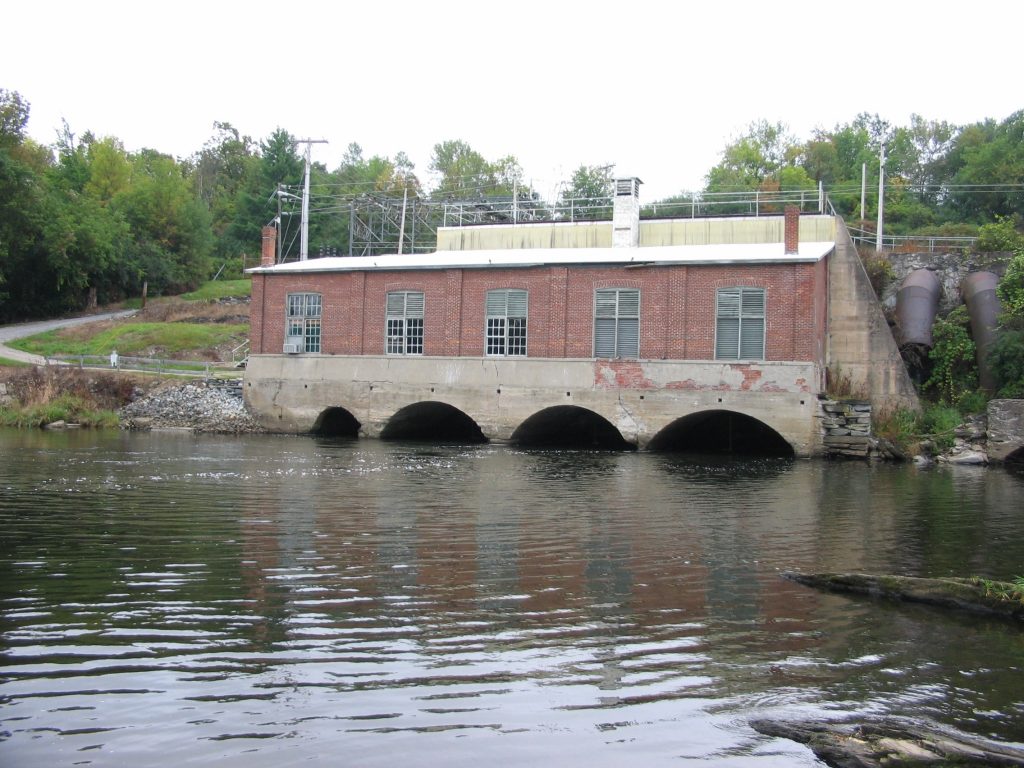 The two concrete gravity dams impound the east and west river channels that diverge around a small island. The dam is 30-feet-high and 478-feet-long, with two ogee spillway sections, a 123-foot-long western spillway section, and a 260-foot-long eastern spillway section. The intake canal is 400-feet-long, 40-feet-wide, and controlled by a gate structure containing two 23-foot-wide, 13-foot-high gates. The powerhouse is located at the downstream end of the intake canal and equipped with steel trashracks having a 1.75-inch clear spacing. The powerhouse includes three Francis turbine units with a total installed capacity of 2.04 MW.

The project operates in a run-of-river mode and impounds a 16-acre reservoir. The project provides a minimum flow of 157 cfs into the approximate 750-foot-long bypass reach, and impoundment fluctuations are limited to 1-inch from the crest of the dam. Project operation relies upon inflows from upstream developments. This flow regime was developed in collaboration with Vermont Agency of Natural Resources (VANR) using data from an Instream Flow Incremental Methodology study. This study evaluated habitat conditions in the bypassed reach with varying flows.

Waters within the project reach are designated as Class B and impaired for e. coli, nutrients, sediment, and PCB contamination. Class B waters are managed to achieve a high level of quality habitat for aquatic biota, fish, and wildlife as well as waters that consistently exhibit good aesthetic value and supports primary contact recreation.

Historically, migratory fish have ascended many of the Lake Champlain tributaries to access spawning waters. While landlocked Atlantic salmon exist in the lake and are stocked in lower Otter Creek, natural populations of Atlantic salmon were extirpated from the Lake Champlain Basin over 150 years ago. Otter Creek is managed to support both cold-water and warm-water fisheries. The river reach upstream of the project has extensive wild trout populations and supports resident fish including bass, perch, sucker, brown bullhead, sunfish, and various minnow species. Passage facilities have yet to be prescribed by resource agencies. The project has trashracks with 1.75-inch spacing to mitigate the potential for entrainment.

The project lands consist of roughly four acres. The surrounding lands are primarily forested with patches of wooded and emergent wetlands along the river’s edge. Further upstream the area is developed with industrial and commercial buildings and rural residential housing. No lands of significant ecological value exist in the project area.

Threatened or endangered species potentially present in the project vicinity include the Indiana Bat, Northern Long-eared Bat, Flutedshell Mussel, Pocketbook Mussel, Giant Floater, Creek Heelsplitter, Frank’s Love-grass, Gray’s sedge, and Cuckoo flower. Consultation with VANR has confirmed that project operations do not impact listed plant species. VANR also confirmed that if project operations continue with run-of-river operations as prescribed by resource agencies, the project will not impact any of the listed species.

Recreational resources at the project include a picnic area, canoe portage, and hiking trails. The project provides public access free of charge.

2021: For Condition 1, the project reported development of a draft revised operations plan in internal review prior to submittal to VDEC. The project remains in compliance based on the annual review.

2020: For Condition 1 which became effective in 2019, the project reported initiation of consultation with VDEC on the operations plan. The project remains in compliance based on the annual review.

May 15, 2019: The decision to recertify the Middlebury Lower Hydroelectric Project is final. No appeals were received during the appeal period which closed on May 11, 2019. The new certification term for the Project is from February 6, 2017 through February 5, 2022.

This decision is preliminary pending the 30-day appeal window. Only those who commented on the initial application during the 60-day comment period are eligible to file an appeal. Such appeal needs to include an explanation as to how the Project does not meet the LIHI criteria. Appeal requests can be submitted by email to comments@lowimpacthydro.org with “Middlebury Lower Hydroelectric Project” in the subject line, or by mail addressed to the Low Impact Hydropower Institute, 329 Massachusetts Ave, Suite 6, Lexington, MA 02420. All requests will be posted to the website.  The applicant will have an opportunity to respond and any response will also be posted. Requests must be received by 5 pm Eastern time on May 11, 2019.  The full application and reviewers report are available below.

November 12, 2018: The Middlebury Lower Hydroelectric project has been granted another extension of the current certificate term. The new expiration date is March 31, 2019.

June 11, 2018: The Middlebury Lower Hydroelectric project has been granted another extension of the current certificate term. The new expiration date is December 31, 2018.

August 31, 2017: The Middlebury Lower Hydroelectric project has been granted another extension of the current certificate term. The new expiration date is March 31, 2018.

May 17, 2017: LIHI has received an application for a new term of Low Impact Certification for the Middlebury Lower Hydroelectric project.  LIHI is seeking public comment on this application.  Specifically, we are interested in knowing whether you think the Middlebury Lower project meets the LIHI Low Impact Certification Criteria, as revised in the 2nd Edition Handbook released in March 2016.  Please review the program and criteria in LIHI’s revised Handbook and then review the Project’s 2016 application materials posted on the project page.

Comments that are directly tied to specific LIHI criteria (flows, water quality, fish passage, etc.) will be most helpful, but all comments will be considered.  Comments may be submitted to the Institute by e-mail at comments@lowimpacthydro.org with “Middlebury Lower Project Comments” in the subject line, or by mail addressed to the Low Impact Hydropower Institute, PO Box 194, Harrington Park, New Jersey 07640.  Comments must be received at the Institute on or before 5 pm Eastern time on July 16, 2017 to be considered.  All comments will be posted to the web site and the applicant will have an opportunity to respond.  Any response will also be posted.

December 16, 2016: The Middlebury Lower Hydroelectric project has been granted an extension of the current certificate term. The new expiration date is August 6, 2017. See extension letter for explanation below.

November 29, 2012: The Middlebury Lower Project has been certified as low impact for a five-year term, effective February 6, 2012 and expiring February 6, 2017.

February 6, 2012: Central Vermont Public Service (CVPS) has submitted an application for the certification of its Middlebury Lower Project. Public comment period on application has opened.