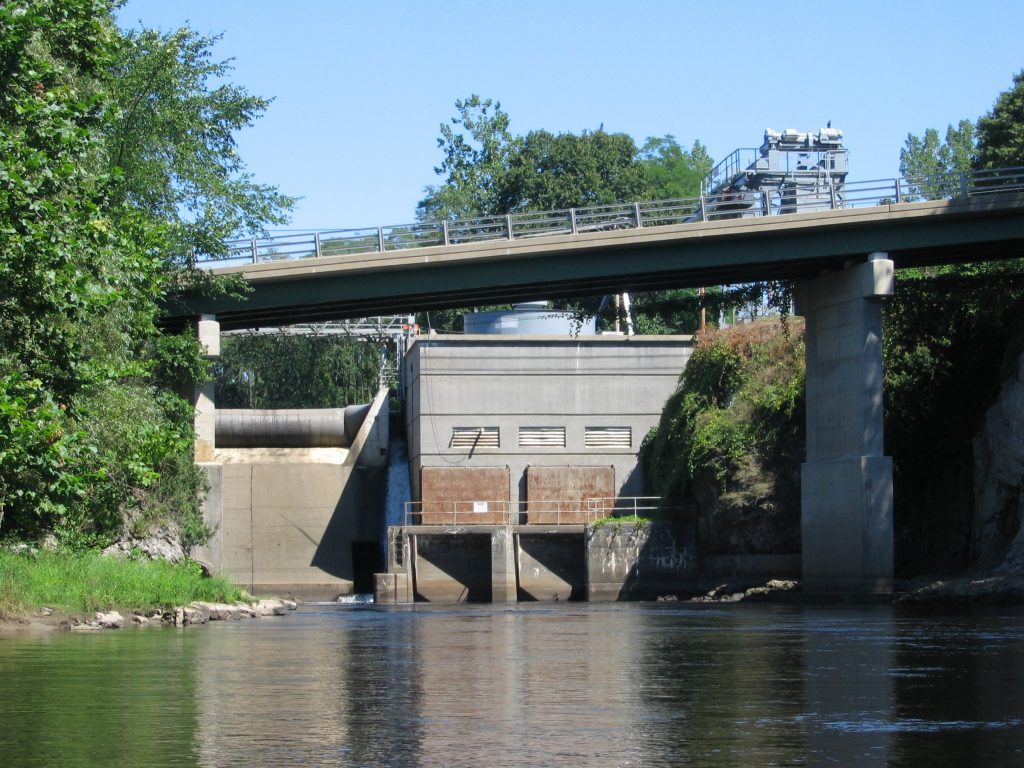 The Weybridge Project is located in the towns of Weybridge and New Haven, in Addison County, Vermont situated at the head of a rock-walled gorge where the Otter Creek cascades around a small island. The project forms a compact cluster of buildings and structures around the eastern and western divided falls at the upstream end of the island. Huntington Falls and Beldens developments (part of the Otter Creek Project (LIHI #128)) are located just upstream and Middlebury Lower (LIHI #99) is located upstream of those. The Vergennes Project (LIHI #134) is located approximately 12 miles downstream and is the first dam on the river upstream of the confluence with Lake Champlain.

Originally constructed in 1922, the project’s initial west timber crib dam was replaced by a concrete dam in 1944/1945. Five years later, the west dam was raised, and the east timber crib dam was also replaced with a concrete dam. A second powerhouse was built, and the original powerhouse was retired in 1951. The project is owned by Green Mountain Power (GMP), the first energy utility certified as a B-Corporation.

The Project includes a concrete gravity dam 30-feet-high and 302.6-feet-long with an integral powerhouse. The dam consists of two spillways: the 150-foot-long west spillway section, topped with a 6-foot-high hinged steel flashboard, and abutted by a 20-foot-wide and 10-foot-high Tainter gate; and a 116-foot-long east spillway section topped with an automatically inflated rubber weir.

The powerhouse is integral with the dam and has an intake with 3-inch steel racks. There is one vertical Kaplan turbine generator with a capacity of 3.0 MW. A diversion structure extends from the downstream end of the dam at Rock Island to another small island at the entrance to the 700-foot-long bypass reach channel, and around another island (Wyman Island), reapportioning the flow in the bypassed (west) and tailrace (east) channels. The diversion structure includes a control weir with stop log slots at the downstream end, at the entrance to the west channel. A 15-foot wide by 3.5-foot-high notch in the control weir passes water from the pool formed by the control weir and the diversion structure, downstream into the west channel around Wyman Island.

The project operates as a daily cycling facility during normal and low flow conditions. Cycling is suspended from April 1 to June 15 to protect fish spawning and the project operates in a run-of-river mode when flows exceed its hydraulic capacity. Fluctuations are limited to 3-inches during run-of-river operations and 2-feet otherwise. The project provides a 250-cfs minimum bypass flow when not generating and 125 cfs during generation. Minimum flows are also increased during April and May should the Vermont Agency of Natural Resources (VANR) notify the project that walleye have been introduced to this river reach to accommodate walleye spawning. This flow regime was developed in consultation with VANR and the US Fish and Wildlife Service.

Waters within the project reach are designated as Class B and impaired for E. coli, agricultural nutrients, sediment, and PCB contamination. Class B waters are managed to support high quality habitat for aquatic biota, fish, and wildlife as well as waters that exhibit good aesthetic value. VANR has confirmed that the project does not contribute to the listed impairments.

Migratory fish have historically ascended many of Lake Champlain’s tributaries to access spawning waters. Natural populations of Atlantic salmon were extirpated from the Lake Champlain Basin around 150 years ago. Today, no natural populations of anadromous or catadromous fish are present in project reach. Sections of Otter Creek upstream of the project are a warm-water fishery with northern pike, smallmouth bass, largemouth bass, brown trout, and rainbow trout, among others. Below the dam is a mixed warm-water and cool-water fishery. Most species found upstream can be found downstream of the project. Resource agencies have not prescribed any upstream passage facilities for the project. Downstream passage is facilitated by the spillway, Tainter gate, or via the turbine, which requires passage through trashracks with 3-inch clear spacing. Passage is also available over the downstream diversion structure and the flow control weir.

The project lands consist of approximately 140 acres. Surrounding lands are primarily forested upland and pasture/hay areas, with some low intensity housing nearby. Project operations are not expected to cause shoreline erosion concerns and no lands of significant ecological value exist in the project area.

Bat species are not expected to be impacted due to the lack of critical habitat in the area. VANR has determined that the project does not impact any of the listed species.

Recreational resources at the project include two canoe portages and take-out areas as well as a picnic area. Public access is provided free of charge.

2020: The project documented completion of flow verification monitoring for the diversion weir, required every five years. Monitoring confirmed proper functioning of the diversion structure and weir, with bypass flows higher than the 100 cfs target. FERC approved the monitoring report in 2020. The project remains in compliance based on the annual review.

April 15, 2019: The decision to recertify the Weybridge Hydroelectric Project is final. No appeals were received during the appeal period which closed on April 11, 2019. The new certification term for the Project is from February 6, 2017 through February 5, 2022.

This decision is preliminary pending the 30-day appeal window. Only those who commented on the initial application during the 60-day comment period are eligible to file an appeal. Such appeal needs to include an explanation as to how the Project does not meet the LIHI criteria. Appeal requests can be submitted by email to comments@lowimpacthydro.org with “Weybridge Hydroelectric Project” in the subject line, or by mail addressed to the Low Impact Hydropower Institute, 329 Massachusetts Ave, Suite 6, Lexington, MA 02420. All requests will be posted to the website.  The applicant will have an opportunity to respond and any response will also be posted. Requests must be received by 5 pm Eastern time on April 11, 2019.  The full application and reviewers report are available below.

November 12, 2018: The Weybridge Hydroelectric project has been granted another extension of the current certificate term. The new expiration date is March 31, 2019.

June 11, 2018: The Weybridge Hydroelectric project has been granted another extension of the current certificate term. The new expiration date is September 30, 2018.

November 3, 2017: The Weybridge Hydroelectric project has been granted another extension of the current certificate term. The new expiration date is March 31, 2018.

LIHI is seeking public comment on this application. Specifically, we are interested in knowing whether you think the Weybridge project meets the LIHI Low Impact Certification Criteria. The Weybridge application is subject to review using the Criteria in the LIHI Certification Handbook of 2016.  Please review the program and criteria in LIHI’s 2016 Handbook and then review the Project’s 2017 application materials posted below. Comments that are directly tied to specific LIHI criteria (flows, water quality, fish passage, etc.) will be most helpful, but all comments will be considered. Comments may be submitted to the Institute by e-mail at comments@lowimpacthydro.org with “Weybridge Project Comments” in the subject line, or by mail addressed to the Low Impact Hydropower Institute, 329 Massachusetts Ave, Suite 2, Lexington, MA 02420. The 60 day public comment period begins on October 26, 2017. Comments must be received at the Institute on or before 5 pm Eastern time on December 26, 2017 to be considered. All comments will be posted to the web site and the applicant will have an opportunity to respond.  Any response will also be posted.

December 16, 2016: The Weybridge Hydroelectric project has been granted an extension of the current certificate term. The new expiration date is November 6, 2017. See extension letter for explanation below.

February 6, 2012: Central Vermont Public Service (CVPS) has submitted an application for the certification of its Weybridge Hydroelectric Project. Public comment period on application has opened.