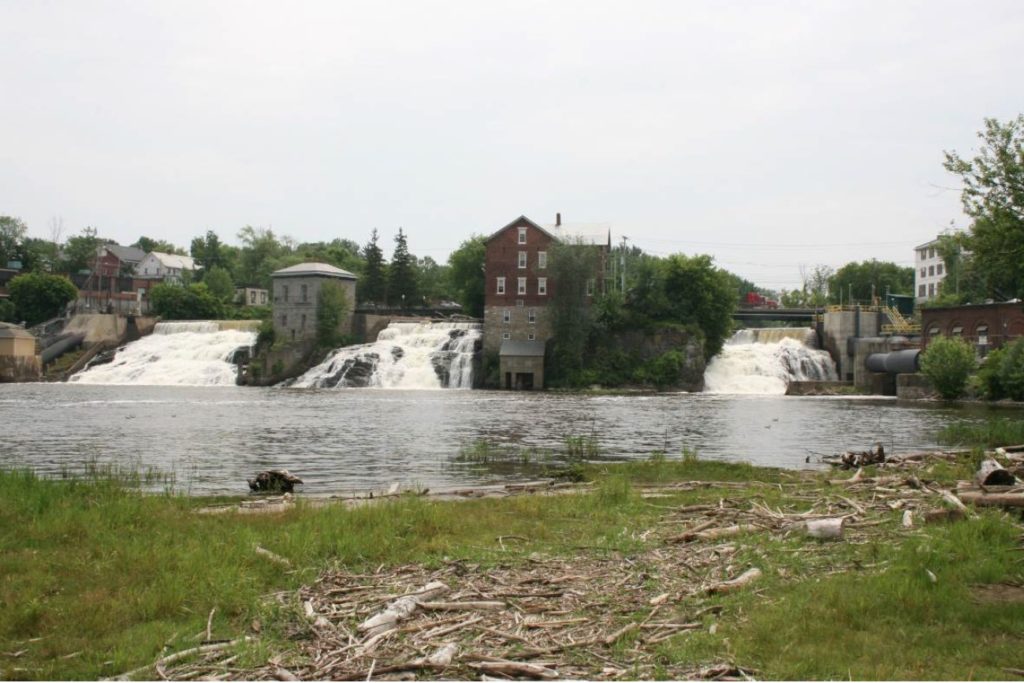 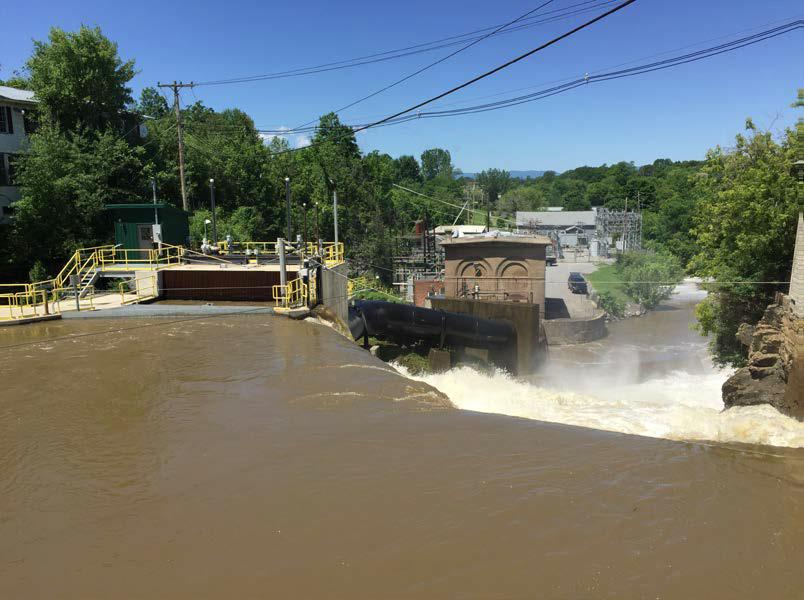 The Vergennes Project is located on Otter Creek in Addison County, Vermont. The project is situated at natural rock falls on Otter Creek, a tributary of Lake Champlain. The project’s two powerhouses, intake structures, three dams, and tailrace lie within the City of Vergennes. Electric power has been generated from Vergennes Falls since 1896. The current facilities of the Vergennes Hydroelectric Project were originally constructed between 1911 and 1943 and underwent a significant number of changes to enhance environmental performance, most notably the conversion from a daily peaking plant to run-of-river operation. The project is located downstream of the Weybridge Project (LIHI #98). The project is owned by Green Mountain Power (GMP), the first energy utility certified as a B-Corporation.

The project includes two powerhouses; Plant 9 located on the south bank of Otter Creek and Plant 9B located on the north bank. The two powerhouses are separated by three concrete spillway sections that are divided by two instream islands and one 29-foot-long non-overflow dam. Center Island divides the 9B spillway from the center spillway and Grist Mill Island divides the center spillway from the Plant 9 spillway. Each of the spillways are approximately 10-feet-high, with a total length of 231 feet. Plant 9B contains one steel penstock and Plant 9 contains two steel penstocks. Each powerhouse includes a forebay with trashracks and head gates.

The Plant 9B station was originally constructed in 1943 and contains one vertical Francis turbine directly connected to a generator. The Plant 9 powerhouse was constructed in 1911 and contains two double discharge Francis turbines installed in 2005-2007. The new modem design units increase the efficiency of the units with a moderate increase (13 cfs) in hydraulic capacity.

The project operates in a strict run-of-river mode and impounds a 133-acre reservoir. Flows over the spillways support aesthetics with the following flow schedule: April 1- October 31: 150 cfs daytime and 75 cfs nighttime; November 1-December 15: 100 cfs daytime and 50 cfs nighttime; December 16 – March 31: No specific flow requirements. The project converted from a peaking plant to run-of-river operations in 1999. Consultation with Vermont Agency of Natural Resources (VANR) confirms compliance with run-of-river operations after completing monitoring requirements as outlined in the 2017 LIHI Certification.

Waters within the project reach are designated as impaired for contact recreation and fish consumption. The impairment is not caused by project operations, but rather due to overflows of wastewater treatment plant pump stations (E. coli) and mercury from atmospheric deposition as indicated in the 2012 Environmental Protection Agency’s Waterbody Quality Assessment Report.

Otter Creek supports a fishery and spawning habitat for landlocked Atlantic salmon, lake sturgeon, and walleye. VANR stocks walleye and Atlantic salmon in lower Otter Creek and these species use areas downstream of the project as spawning habitat. Fish passage facilities have not been prescribed by agencies at the project. Trashracks have been installed to prevent entrainment and the project provides seasonal flows over the dam to aid in the protection and preservation of fish populations (April 1- June 15 for Atlantic salmon and walleye and September 15 – November 15 for lake sturgeon).

The project property consists of 7 acres and there are no lands of significant value in the project area. Surrounding lands are primarily privately-owned lands including urban, residential, or agricultural lands.

Cultural resources in the project area include the structures featured on the two islands found between the dams: Norton’s Grist Mill and a historic pump house, both constructed in the late 1800s. The project operates under a Cultural Resources Management Plan developed in coordination with the Vermont Division for Historic Preservation. The project owner reports annually on activities conducted.

April 6, 2022: The Low Impact Hydropower Institute (LIHI) has received a complete recertification application from Green Mountain Power Corporation for the Vergennes Project. The complete application can be found below.

LIHI is seeking comment on this application. Comments that are directly tied to specific LIHI criteria (flows, water quality, fish passage, etc.) will be most helpful, but all comments will be considered. Comments may be submitted to LIHI by e-mail at comments@lowimpacthydro.org with “Vergennes Project Comments” in the subject line, or by mail addressed to the Low Impact Hydropower Institute, 1167 Massachusetts Avenue, Office 407, Arlington, MA 02476. Comments must be received at the Institute on or before 5 pm Eastern time on June 5, 2022 to be considered. All comments will be posted to the web site and the applicant will have an opportunity to respond. Any response will also be posted.

June 20, 2017: Having received no requests for appeal, the Vergennes Hydroelectric Project received a final decision on June 8th that the facility satisfies the LIHI Certification Criteria. The certificate includes the following condition:

Any Commenter may submit a letter to the Executive Director requesting an appeal within the 30-day period which ends on June 8, 2017.  The appeal request must state specific reasons why the hydropower facility should have failed one or more criteria.  Only individuals or organizations that commented on the initial Application Package may file an appeal.

If no appeal is requested within the 30-day period, the Executive Director will issue LIHI Certification for the facility and post a notification of certification on the Institute’s website.  Once final, the effective certification date for the Vergennes Project is December 30, 2016 for a five (5) year term, which will expire on December 30, 2021.

January 6, 2016: On December 30, 2016, the Low Impact Hydropower Institute (LIHI) received a complete application from Green Mountain Power Corporation for the Low Impact Certification of the Vergennes hydroelectric project, located on Otter Creek, a tributary to Lake Champlain, at river mile 7.6 in Vermont.

LIHI is seeking public comment on this application. Specifically, we are interested in knowing whether you think the Vergennes project meets the LIHI Low Impact Certification Criteria. The Vergennes application is subject to review using the Criteria in the LIHI Certification Handbook of 2014.  Please review the program and criteria in LIHI’s 2014 Handbook and then review the Project’s 2016 application materials posted on the project page. Comments that are directly tied to specific LIHI criteria (flows, water quality, fish passage, etc.) will be most helpful, but all comments will be considered. Comments may be submitted to the Institute by e-mail at comments@lowimpacthydro.org with “Vergennes Project Comments” in the subject line, or by mail addressed to the Low Impact Hydropower Institute, PO Box 194, Harrington Park, New Jersey 07640.  Comments must be received at the Institute on or before 5 pm Eastern time on March 12, 2017 to be considered. All comments will be posted to the web site and the applicant will have an opportunity to respond.  Any response will also be posted.