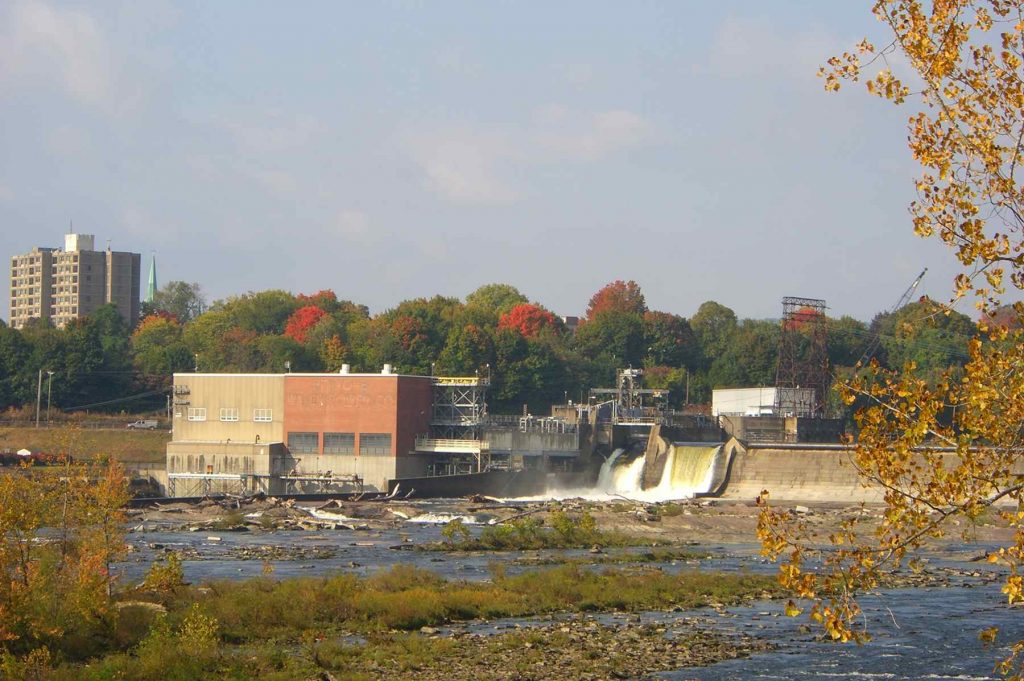 March 8, 2021 COVID-19 Update: HG&E will continue to restrict public access to the fishlift along with any other activities that will involve exposing our employees to the general public. That would also include cancelling the Shad Derby and any canoe portages around the Holyoke Dam. I know that this may be disappointing to many, but in order to ensure the health and safety of our visitors and employees we feel we must take these measures again in 2021.

March 19, 2020 - COVID-19 Update: Holyoke Gas and Electric has notified FERC and resource agencies of the decision to restrict public access to the fishlift in 2020 and has canceled the annual Shad Derby. The company is taking steps to continue to safely operate the fishlift facilities this spring.

The Holyoke Project is located on the Connecticut River in Holyoke and South Hadley, Massachusetts. The dam and canal system were conceived and constructed as one system by the South Hadley Falls Company starting in 1847-1848. The purpose of the system was to harness the power of Hadley Falls by diverting water from the Connecticut River to mills for mechanical power for manufacturing. The first hydroelectric turbine was installed within the canal system in 1888. Holyoke dam continued to be used solely for diversion of flow until 1950 when the first hydroelectric turbine was installed; a second unit followed in 1983. The project consists of 12 operating developments: Hadley Falls, Boatlock Station, Beebe-Holbrook Station, Skinner Station, Chemical, Riverside #4-8, Holyoke 1-4, and Valley Hydro (Station #5). The Holyoke Canal system consists of three levels, referred to as First, Second, and Third Level Canals. The Holyoke dam is located at the mouth of the canal system and is the only dam associated with the project. There are no downstream dams on the Connecticut River although several are located upstream including Turner’s Falls and Vernon (LIHI #40), the two closest hydroelectric projects. The Open Square Project (LIHI #86) is also located within the canal system.

The project includes Holyoke Dam and twelve developments on the three levels of the canal system, with a combined capacity of 46.946 MW:

The project operates in run-of-river mode. Inflows to Holyoke Dam are highly regulated by upstream operations at Turner Falls and Vernon. Impoundment fluctuations are limited to 1.2 feet for protection of the endangered Puritan tiger beetle. Minimum flows of 840 cfs are provided into the three channels of the bypass reach and adjusted up to 1,300 cfs for the fish passage season. A total discharge of 550 cfs is also released into the canal system – 150 cfs for the operation of the downstream fish passage facility and 400 cfs for protection of aquatic biota, specifically mussels. The flow regimes were developed in consultation with Massachusetts Department of Environmental Protection (MADEP) and Massachusetts Division of Fish and Wildlife (MADFW).

Waters within the project reach are listed as impaired for E. coli, PCBs in fish tissue, and total suspended solids. Consultation with MADEP concluded that none of the listed impairments are contributed to by the project. The project monitors water quality at the project developments and reports annually to MADEP with the results.

The project lands are completely located within a heavily developed, urban environment. No lands of significant ecological value are found in the project area. The project developed a Shoreline Erosion Remediation Plan which included provisions for inventorying, evaluating, monitoring, and remediating shoreline erosion problems at the project.

Threatened or endangered species potentially present in the project vicinity include the Puritan tiger beetle, bald eagle, yellow lampmussel, Atlantic sturgeon, and shortnose sturgeon. One of the primary reasons the project modified operations from peaking to run-of-river was to protect the Puritan tiger beetle populations that were found along the project boundaries. This operational modification also helped enhance downstream habitat for aquatic species. The National Marine Fisheries Service was consulted to determine the impact of the project on sturgeon populations. There is potential for critical habitat to occur downstream of the project but outside of the project boundary. Thus, operations have generally benefitted the downstream flow regime, enhancing the habitat and minimizing any adverse impacts.

The Holyoke and South Hadley canal systems are both listed as Historic Districts on the National Register of Historic Places. Unfortunately, upgrading of the fish passage facilities in 2015 resulted in adverse impacts to a submerged timber crib dam and a 1950s-era cofferdam, both contributing elements to the Holyoke Hydropower System Historic District. The project owner collaborated with the State Historic Preservation Office (SHPO) to preserve photographs of the resources and salvage some pieces of wood from the timber crib dam as part of it had to be removed in the passage facility upgrade. This was done in coordination with the Holyoke Historical Commission. Additionally, the historic Texon Mill was demolished after several failed attempts at adaptive reuse of the building. An agreement was made between the Army Corps of Engineers, the SHPO, and the South Hadley Selectboard and Historic Commission to demolish the mill, clean up the site, and install recreational and public access improvements (Texon Mill Park).

Recreational resources at the project include walking trails, picnic areas, fishing access, a canoe portage, and a visitor center. Public access is provided free of charge.

PLUS-Standard: The project owner voluntarily added the Texon Mill park and a fishway visitor center. The project has permitted camps on project land and funds a seasonal river ranger.

September 28, 2017:  The 30 day appeal window for the Holyoke Hydroelectric Project has now ended and no appeals were filed. Therefore, the preliminary decision is now final and the Holyoke Gas & Electric Department Hydroelectric System has been approved for an 8-year term, effective January 1, 2017 and expiring January 1, 2025 with an opportunity to extend the term to January 1, 2027.

Any Commenter may submit a letter to the Executive Director requesting an appeal within the 30-day period.  The appeal request must state specific reasons why the hydropower facility should have failed one or more criteria.  Only individuals or organizations that commented on the initial Application Package may file an appeal.  In addition, applicants may appeal conditions or decisions in a similar manner. Further information about the LIHI appeal process is available in the LIHI Handbook, available at https://lowimpacthydro.org/certification-program-html/.

If no appeal is requested within the 30-day period, the Executive Director will issue the final certification for the facility and post a notification of certification on the LIHI website.  Once final, the effective certification date for the Holyoke Gas & Electric Department Hydro System is August 31, 2017 for an eight (8) year term (with the possibility of an additional two (2) years after satisfaction of Condition 2) which will expire on January 1, 2025.

April 21, 2017: The Low Impact Hydropower Institute has received a complete application for a new term of Low Impact Certification for the Holyoke Hydroelectric project. The application materials can be found in the Files section below.

LIHI is seeking public comment on this application.  Specifically, we are interested in knowing whether you think the Holyoke project meets the LIHI Low Impact Certification Criteria, as revised in the 2nd Edition Handbook released in March 2016.  Please review the program and criteria in LIHI’s revised Handbook and then review the Project’s 2016 application materials posted on the project page.

Comments that are directly tied to specific LIHI criteria (flows, water quality, fish passage, etc.) will be most helpful, but all comments will be considered.  Comments may be submitted to the Institute by e-mail at comments@lowimpacthydro.org with “Holyoke Project Comments” in the subject line, or by mail addressed to the Low Impact Hydropower Institute, PO Box 194, Harrington Park, New Jersey 07640.  Comments must be received at the Institute on or before 5 pm Eastern time on June 21, 2017 to be considered.  All comments will be posted to the web site and the applicant will have an opportunity to respond.  Any response will also be posted.

July 26, 2012: The Holyoke Hydropower System has been certified as low impact for a five year term, effective January 1, 2012 and expiring January 1, 2017, with the following conditions:

May 14, 2010: The Holyoke Gas and Electric Department has submitted an application for certification of the HG&E Hydroelectric System.