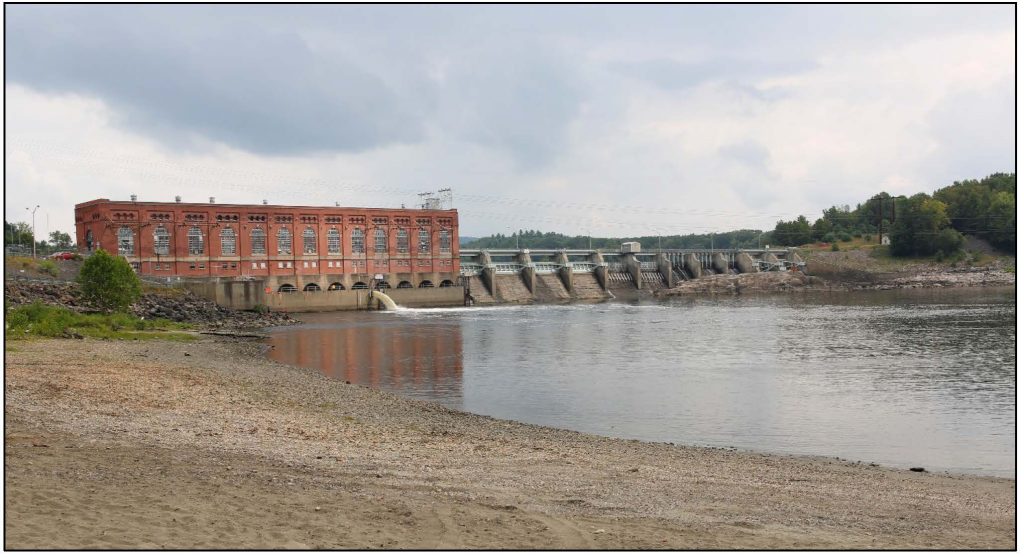 The Vernon Project is located on the Connecticut River in Cheshire County, New Hampshire and Windham County, Vermont. The project was originally built in 1909 and included the dam, powerhouse, and eight turbine units. A powerhouse extension was completed in 1926, bringing two more turbine units online. Other major upgrades throughout the years include the completion of an upstream fish ladder in 1981, construction of downstream fish passage facilities in 1995, and the replacement of turbine Units Nos. 5-8 in 2008.

The closest dam is Turner’s Falls dam about 20 miles downstream in Massachusetts. The Turner’s Falls impoundment backwaters to the base of Vernon dam and also forms the lower reservoir for the Northfield Mountain Pump Storage Project. The nearest upstream dams are the Bellows Falls Project about 32 miles away and the Wilder Project, another 44 miles upstream.

The dam is a composite overflow and non-overflow ogee-type, concrete gravity structure extending across the Connecticut River between Hinsdale, New Hampshire, and Vernon, Vermont. The dam is 956 feet long with a maximum height of 58 feet. It includes the integral powerhouse with a sluice gate block section that is about 356 feet long and a concrete overflow spillway section about 600 feet long. The spillway portion of the dam is divided into 12 bays containing a trash/ice sluice, 4 Tainter gates, 2 hydraulic flashboard bays, 3 stanchion bays, and 2 more Tainter gates. The various bays are separated by concrete piers supporting a steel and concrete bridge that runs the length of the dam for access and for operation of flashboards. The trash/ice sluice is a skimmer gate that passes logs and other debris deflected away from the powerhouse by a log and ice boom in the powerhouse forebay. The powerhouse contains ten turbine generating units. Units 1-4 and 9-10 are single runner vertical Francis units while Units 5-8 are vertical axial flow Kaplan units. Total installed capacity is 32.4 MW.

The project operates in a daily cycling mode with limited storage, impounding a 2,550-acre reservoir. There is no bypassed reach. The project provides a minimum flow of at least 1,250 cfs. This flow regime was developed based on recommendations from the US Department of the Interior and supported by the US Environmental Protection Agency to prevent heat build-up in the reservoir from cooling system discharges from the Vermont Yankee Nuclear Power Plant, decommissioned in 2014.

The project includes an upstream fish ladder designed to pass Atlantic salmon and American shad which became operational in 1981. The ladder design includes two types of fishway: an ice harbor pool-and-weir design at the lower end and a serpentine vertical-slot design at the upper end. Between the two, a reregulating bay is used to adjust the volume of water moving between the upper and lower sections. This bay also includes a fish trap mechanism and counting window. The facility also supports passage for sea lamprey, American eel, and some resident species (bass, sucker, walleye, trout, and sunfish). Permanent downstream passage facilities were constructed in 1995 that consists of a “fish pipe” that discharges about 350 cfs through the powerhouse, a second smaller “fish bypass” at the Vermont end of the powerhouse that discharges about 40 cfs, and a 156-foot-long louver array that extends from the forebay to the fish pipe entrance. The louver intercepts and directs downstream-migrating fish that enter the forebay from midriver and from the east (New Hampshire) shoreline into the fish pipe. The smaller fish bypass on the Vermont end of the powerhouse functions as a secondary passage route for fish that are not intercepted by the louver array.

The project lands consist of the areas surrounding the project facilities as well as 287 acres of fee-owned land, with 223 acres set aside as undeveloped. Most of the shoreline is privately owned and is not under project ownership.

Threatened or endangered species potentially present in the project vicinity include Northern long-eared bat, bald eagle, cobblestone tiger beetle, Fowler’s toad and pygmy weed. Bald eagles have been observed in the project area in New Hampshire and likely use the project downstream reaches of the river as foraging habitat, especially during the winter as the flow from the project prevents the water from icing over. Pygmy weed is a freshwater tidal species which was newly discovered in the project area in 2012. The daily fluctuations due to project operations account for the species presence in the river. Cobblestone tiger beetle was found at the far upper extent of the 26-mile-long impoundment and unlikely to be impacted by project operations. Fowler’s toad is found downstream of the dam. Recent studies suggest that project operations may be providing safe habitat for the pygmy weed and Fowler’s toad.

The buildings and structures associated with the project are eligible for listing on the National Register of Historic Places as its own Historic District. The New Hampshire State Historic Preservation Office has concluded that project operations do not adversely impact the historic resources at the project.

December 16, 2021: The Vernon project’s LIHI Certificate has been extended again until December 31, 2022 in order to allow for LIHI to address the unique situation of a recertification taking place at a time within a FERC relicensing when studies have been completed but no agency recommendations are available yet.

December 17, 2020: The Vernon project’s LIHI Certificate has been extended again until December 31, 2021 in order to allow for LIHI to address the unique situation of a recertification taking place at a time within a FERC relicensing when studies have been completed but no agency recommendations are available yet.

February 26, 2020: The Vernon project’s LIHI Certificate has been extended until December 31, 2020 in order to allow for LIHI to address the unique situation of a recertification taking place at a time within a FERC relicensing when studies have been completed but no agency recommendations are available yet.

July 2, 2019:  The public comment period for the Vernon recertification application has been extended to 5 pm Eastern time on July 12, 2019. All comments must be received by that time to be considered.

May 7, 2019: The Low Impact Hydropower Institute has received a complete application for Low Impact Recertification of the Vernon Hydroelectric Project.  LIHI is seeking public comment on this application.  Specifically, we are interested in knowing whether you think the Project meets the LIHI Low Impact Certification Criteria, as revised in the 2nd Edition Handbook.  Please review the program and criteria in LIHI’s revised Handbook and then review the Project’s application materials below. Comments that are directly tied to specific LIHI criteria (flows, water quality, fish passage, etc.) will be most helpful, but all comments will be considered.  Comments may be submitted to the Institute by e-mail at comments@lowimpacthydro.org with “Vernon Project Comments” in the subject line, or by mail addressed to the Low Impact Hydropower Institute, 329 Massachusetts Avenue, Suite 6, Lexington, MA 02420.  Comments must be received on or before 5 pm Eastern time on July 6, 2019 to be considered.  All comments will be posted to the web site and the applicant will have an opportunity to respond.  Any response will also be posted.

This LIHI recertification is taking place in the middle of a very complex set of FERC relicensing proceedings, the outcome of which is not at all clear at this time.  While the current LIHI certification decision is based on findings that indicate the Vernon facility satisfies the LIHI criteria defined in the applicable, April 2014 version of our Certification Handbook, the environmental conditions in the Connecticut River are dynamic and changing — the full effects of issues such as the shutdown of the Vermont Yankee Nuclear Power Plant, the changing status of Atlantic salmon, American shad, and American eel stocks, etc., will continue to evolve. LIHI’s current decision on a new certification covering the period from 2013 to 2018 should not be interpreted as an indication that the Vernon facility’s current effects on the river basin will continue to be satisfactory over the longer-term future.  The next time that Vernon comes due for recertification, LIHI’s decision will be based either on the new, 2nd Edition Certification Handbook or on subsequent revisions if they occur.  LIHI strongly encourages the Vernon owner to work with all stakeholders in the basin to reach long-term, sustainable solutions to water management that will produce positive outcomes for both clean energy and the environment.

September 19, 2016:  LIHI Executive Director Michael J. Sale announced a Preliminary Certification Decision that the Vernon Station Hydroelectric Project (FERC No. P-1904) satisfies the 2014 LIHI Certification Criteria and will be issued a new LIHI certification with an expiration date of December 15, 2018. This certification decision was made by the LIHI Governing Board’s Technical Committee after a full review of the Application Reviewer’s report, all public comments and additional materials provided by the Applicant. Once final, the effective certification date for the Vernon Station Project is December 15, 2013 for a five (5) year term, which will expire on December 15, 2018. As provided for in Section 4.2.5 of the LIHI 2nd Edition Handbook, the Preliminary Certification Decision to certify, along with the Application Reviewer’s report will be posted on the Institute’s Web page for 30 days.  The Application Reviewer Report and all the application materials are available at the bottom of the page. Individuals or organizations that commented on the initial Application Package (“Commenter”) may submit a letter to the Executive Director requesting an appeal within the 30-day period beginning on September 19, 2016, and closing on October 18, 2016. The appeal request must state specific reasons why the hydropower facility should have failed one or more criteria. If an individual or organization did not comment on the initial Application Package, they may not file an appeal.

January 27, 2014: The Low Impact Hydropower Institute has received an application from TransCanada for a second term of certification of the Vernon Station Hydroelectric Project. The 2013 application was received on December 5th, but due to administrative backlog, the certificate has been granted a three month extension beyond the date of December 15th. The application materials can be found in the “Files” section below.

June 25, 2009: The Vernon Station Hydroelectric Project has been certified as low impact for a five year term, effective December 15, 2008 and expiring December 15, 2013.