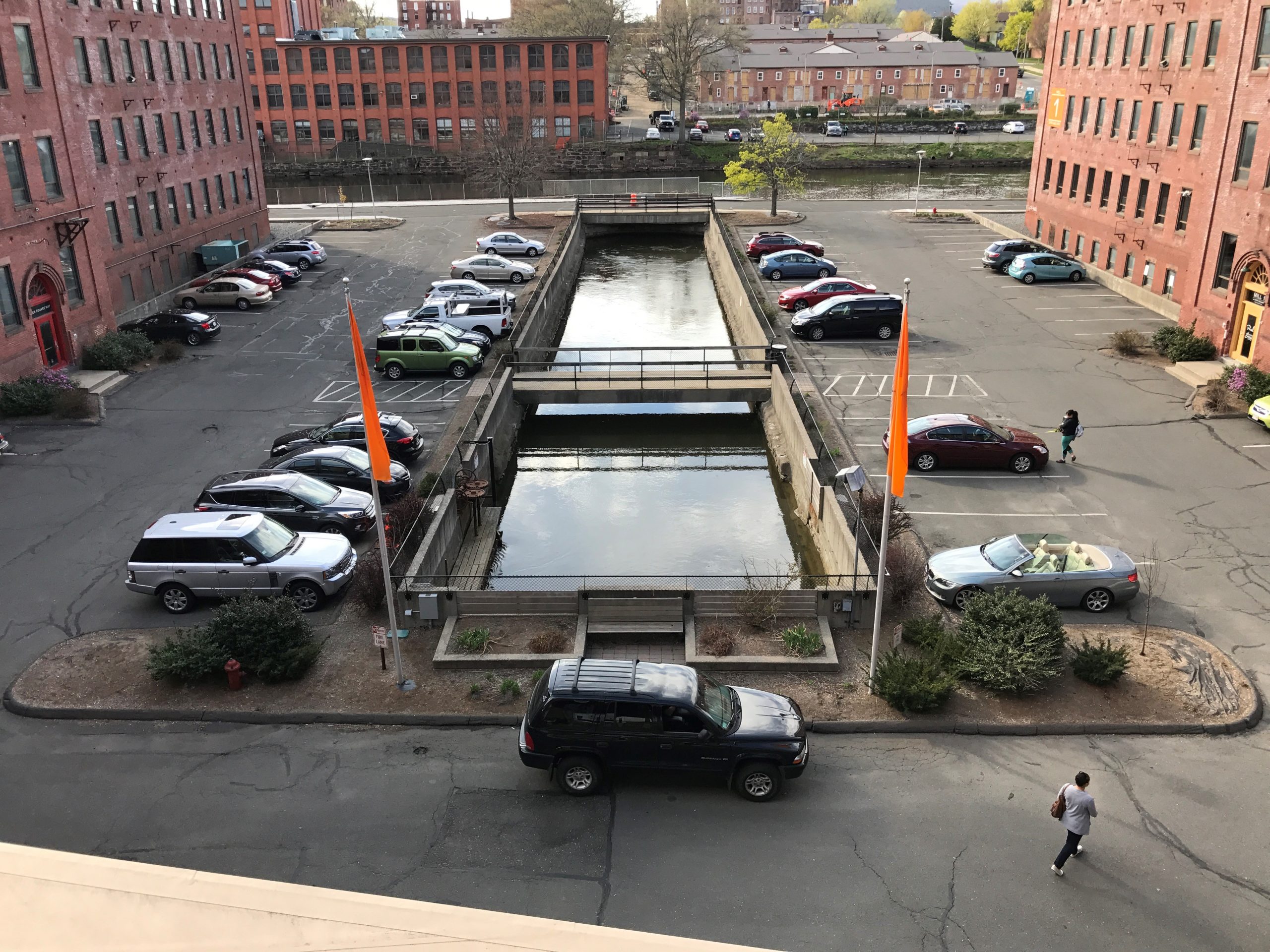 The Open Square Project is located in Holyoke, Massachusetts on the Connecticut River and the Holyoke Canal System, a man-made structure constructed for the purpose of power generation. The canal system consists of three levels, referred to as First, Second, and Third Level Canals. Holyoke Gas & Electric (HG&E), a department of the City of Holyoke owns and operates hydroelectric facilities at Holyoke Dam (the Hadley Falls Station) and in the Holyoke Canal System (LIHI #89).

There are 16 hydroelectric generating stations currently in service on the Holyoke Canal System including two owned by Open Square and 14 owned and operated by HG&E. The canal system begins with the canal gatehouse structure located between the Hadley Falls Station and the western shore. The dam and canal system were conceived and constructed by the South Hadley Falls Company starting in 1847. The first mills were built and operated in 1848 and the first hydroelectric turbine was installed in the system in 1888.

The project is a conduit facility and operates in a run-of-river mode. The project inflow is maintained at a constant elevation except for annual maintenance drawdown.

Waters within the project reach are designated as impaired for PCBs, E. coli, and total suspended solids. The project does not have any independent control over water quality in this reach. Water quality is monitored for temperature, dissolved oxygen, and fecal coliform by HG&E. The Massachusetts Department of Environmental Protection confirms that the project is not the cause of the listed impairments.

Migratory fish are excluded from the canal system and passage systems at the Hadley Falls Dam facilitate upstream fish migration in the Connecticut River. This consists of a fish lift and upstream eel ramps used to pass diadromous species upstream. Downstream passage is facilitated by a louver facility located about 554 feet downstream of the canal gatehouse. The full-depth louver rack is angled downstream across the canal and ends at a bypass facility and pipe. The pipe transports migrating fish to the Hadley Falls Station tailrace. The No. 1 Overflow structure, which is located immediately downstream of the gatehouse, discharges water directly back to the Hadley Falls Station tailrace, or to the fish lift attraction water. The Massachusetts Division of Fisheries and Wildlife confirms that the passage prescription works effectively and that passage facilities are not need at the Open Square project.

The project lands under the control of the owner only include the 8.5-acre mill site. No lands of significant ecological importance exist in the project vicinity as the surrounding area is urban streets and canals.

Threatened or endangered species potentially present in the project vicinity include yellow lampmussel and dwarf wedgemussel. The only potential for impact on listed species comes during maintenance drawdowns in the canal system. HG&E has implemented protocols during drawdown periods to minimize impact on the listed species as approved by resource agencies.

The Holyoke Canal system is listed on the National Register of Historic Places as a Historic District and the project site is included in the Inventory of Historic and Archaeological Assets of the Commonwealth of Massachusetts. The project owner provides site tours of the mill buildings and turbines and hosts performances of local historical plays.

While recreational access is limited for public safety concerns, the project owner is undertaking enhancement activities on the property including new sidewalks and a Canal Walk with pedestrian lighting, trees, and bike lanes. The project also collaborates with the town to plan activities on the Canal Walk.

Condition satisfied in 2020. Condition 1: The Owner shall monitor the status of the studies being conducted evaluating impacts to American eel and other resident species living in the canal system for the re-licensing of the Holyoke Nos. 1, 2 and 3 Projects (FERC Projects P-2386, 2387 and 2388, respectively). When a new license is issued to these facilities, the Owner shall notify LIHI of the issuance date(s). At that time, LIHI will re-assess whether or not impacts are likely occurring at Open Square, and if so, will consider actions that may be needed at Open Square to maintain its LIHI certification.

Condition partially satisfied in 2019, pending completion – Condition 2 (carried forward from 2012 certification): The Owner shall cooperate with the City of Holyoke in the planning and development of the Holyoke Canal Walk. Such cooperation shall accommodate the project’s planned completion within 12-18 months. The status of cooperation for this Canal Walk related bridge project shall be provided to LIHI within 45 days of reaching a mutually agreeable understanding. A summary of further coordination activities shall be provided in the annual reports to LIHI.

2021: There were no reported changes or compliance issues. The project remains in compliance based on the annual review.  For Condition 2, the project reported the canal walk work is ongoing.

October 3, 2017:  On October 3, 2017, the 30-day appeal window for the preliminary decision to recertify the Open Square Hydroelectric Project ended with no appeals filed. The recertification decision is therefore final. The term of Low Impact Certification for the Open Square Hydroelectric Project is from December 5, 2016 and expires on December 5, 2026.

August 25, 2017: On August 24th, LIHI issued a Preliminary Decision that the Open Square Hydroelectric Project continues to meet LIHI Low Impact Certification Criteria. As provided for in Section 4.2.5 of the LIHI 2nd Edition Handbook, the Preliminary Certification Decision, along with the Application Reviewer’s report and (if prepared) report of the Executive Director, will be posted on the Institute’s Web page for 30 days. Notice of the posting will be provided to all individuals or organizations that commented on the initial Application Package. Any Commenter may submit a letter to the Executive Director requesting an appeal within the 30-day period. The appeal request must state specific reasons why the hydropower facility should have failed one or more criteria. Only individuals or organizations that commented on the initial Application Package may file an appeal. In addition, applicants may appeal conditions or decisions in a similar manner. Further information about the LIHI appeal process is available in the LIHI Handbook, available at https://lowimpacthydro.org/certification-program-html/. If no appeal is requested within the 30-day period, the Executive Director will issue the final certification for the facility and post a notification of certification on the LIHI website. Once final, the effective certification date for the Open Square Hydroelectric Project is December 5, 2016 for a ten(10) year term which will expire on December 5, 2026.

June 7, 2017: The Low Impact Hydropower Institute has received a complete application for a new term of Low Impact Certification for the Open Square Hydroelectric Facility. The Open Square Hydroelectric Facility is located in the town of Holyoke, Hampden County, Massachusetts, on the Connecticut River. LIHI is seeking public comment on this application.  Specifically, we are interested in knowing whether you think the Open Square project meets the LIHI Low Impact Certification Criteria, as revised in the 2nd Edition Handbook released in March 2016.  Please review the program and criteria in LIHI’s revised Handbook and then review the Project’s 2017 application materials posted on the project page. Comments that are directly tied to specific LIHI criteria (flows, water quality, fish passage, etc.) will be most helpful, but all comments will be considered.  Comments may be submitted to the Institute by e-mail at comments@lowimpacthydro.org with “Open Square Comments” in the subject line, or by mail addressed to the Low Impact Hydropower Institute, 329 Massachusetts Avenue, Suite 2, Lexington, MA 02420.  Comments must be received at the Institute on or before 5 pm Eastern time on September 25, 2017 to be considered.  All comments will be posted to the web site and the applicant will have an opportunity to respond.  Any response will also be posted.

May 3, 2012: The Open Square Hydroelectric Project has been certified as low impact for a five year term, effective December 5, 2011 and expiring December 5, 2016. The following conditions were included with the certificate:

Recognizing that there is a concurrent application by Holyoke Gas & Electric Department for its Hadley Falls Station and Canal stations, that this application remains pending at this time, and that the Open Square Hydroelectric Project is inextricably part of the entire generating system at the Holyoke Dam site, LIHI adds the following two special conditions:

LIHI reserves the right to suspend certification if the above steps are not completed, if no agreement is reached with the agencies, or if required measures to ensure downstream passage that is appropriately protective of the Atlantic salmon resource, are not made by April 1, 2013.

February 5, 2012: Public comment period on application has been closed.

December 5, 2011: Open Square Properties has submitted an application for the certification of the Open Square Hydroelectric Project. Public comment period has been opened.