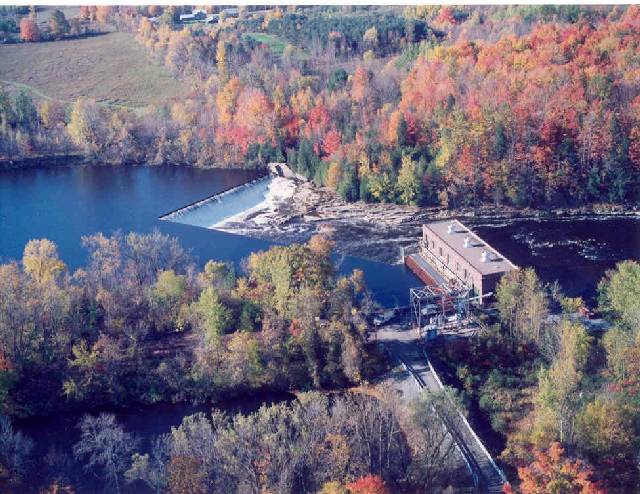 The Beebee Island Project dam was originally constructed in 1802 to power a sawmill and grist mill. The project was redeveloped for hydroelectric generation around 1931.

The five Black River developments operate in run-of-river mode with pondage with flows subject to flood control and augmentation from upstream storage projects. The Beebee Island project operates in run-of-river mode with minimal storage. Each development has differing flow requirements which were developed via recommendations from the United States Fish and Wildlife Service (USFWS) and the New York State Department of Environmental Conservation (NYSDEC).

Waters within the project reaches are generally of good quality, although the upland lakes and ponds are significantly impacted by atmospheric deposition and acidic precipitation. No portion of the main stem of the Black River is listed as impaired. The following water quality designations are classified by NYSDEC.

Historically, migratory fish species such as Atlantic salmon were found in the lower reaches of the Black River. The historical extent of their reach stopped at the Mill Street Falls at Beebee Island as this waterfall may have prevented further upstream migration of Atlantic salmon. NYSDEC and USFWS has been successful in restoring these populations as far upstream as the Beebee Island waterfall. Downstream passage is provided at all six developments and trashracks at each development mitigate the potential for entrainment. Seasonal trashrack overlays (1-inch bar spacing) are installed at each development, except Sewalls, in the top half of the water column from May 1 to October 1 to further minimize entrainment in migration season.

The project lands at the Black River developments are governed by the project’s Vegetative Buffer Plan which maintains the existing natural woodland buffer areas along the shorelines of the five developments. This plan does not apply to the Beebee Island Project which is located in an urban environment and has a small footprint.

PLUS-Standard: 100% of owned lands within the wooded shoreline buffer are protected, amounting to over 240 acres of protected natural shoreland. The project owner contributes $4,000 annually to the Black River Fund that allocates assets according to recommendations of the Black River Advisory Council. Funds are utilized for ecosystem restoration, natural resource stewardship, public education, research, and improving recreational access and resources.

Threatened or endangered species potentially present in the project vicinity include the Blanding’s turtle, Indiana bat, and piping plover. Consultation with NYSDEC’s Natural Heritage Program found that the only species potentially in the project area is the Indiana bat. No hibernacula are known to exist in the area, but project operations are not likely to affect the species especially with the woodland buffer preservation actions in place.

Of the six developments, only the Beebee Island project is currently eligible for listing on the National Register of Historic Places. The project owner consulted with the New York State Historic Preservation Office and the Advisory Council on Historic Preservation to develop a Cultural Resource Management Plan for the project to ensure proper stewardship and enhancement of any resources in the project area.

Recreational resources at the developments include car-top boat launches, canoe portages, shore fishing areas, and scenic overlooks. Public access is provided free of charge at each development where safety concerns/private ownership do not preclude access.

June 19, 2018 – The 30-day appeal window for the preliminary recertification decision of the Black River/Beebee Island Hydroelectric Projects closed on June 16, 2018 with no appeals to the decision received. The decision is therefore final and the Black River/Beebee Island Hydroelectric Projects is recertified for a 8-year term from December 7, 2017 through December 6, 2025.

May 17, 2018: On May 16, 2018, the Black River/Beebee Island Hydroelectric Projects received preliminary approval for a new 8-year term of Low Impact Certification.

This decision is preliminary pending the 30-day appeal window. Only those who commented in the initial application 60-day comment period are eligible to file an appeal. Such appeal needs to include an explanation as to how the projects do not meet the LIHI criteria. Appeal requests can be submitted by email to comments@lowimpacthydro.org with “Black River/Beebee Island Hydroelectric Projects” in the subject line, or by mail addressed to the Low Impact Hydropower Institute, 329 Massachusetts Ave, Suite 2, Lexington, MA 02420. All requests will be posted to the website and the applicant will have an opportunity to respond and any response will also be posted. Requests must be received by 5 pm Eastern time on June 16, 2018.  The full application and reviewers report are available at the bottom of this page.

If no appeal requests are received and the decision becomes final, the new term for the Black River/Beebee Island Projects will be December 7, 2017 through December 6, 2025.

January 2, 2018: The Low Impact Hydropower Institute has received a complete application for a new term of Low Impact Certification for the Black River and Beebee Island Hydroelectric Projects. The Black River and Beebee Island certification includes the Black River Project (FERC No. 2569) consisting of five hydroelectric developments along the Black River in Jefferson County, New York (Black River, Sewalls, Herrings, Kamargo, Deferiet) and the Beebee Island Project (FERC No. 2538). The 2017 application materials can be found below. LIHI is seeking public comment on this application. Specifically, we are interested in knowing whether you think the Black River and Beebee Island projects meet the LIHI Low Impact Certification Criteria, as revised in the 2nd Edition Handbook released in March 2016. Please review the program and criteria in LIHI’s revised Handbook and then review the Project’s 2017 application materials posted on the project page. Comments that are directly tied to specific LIHI criteria (flows, water quality, fish passage, etc.) will be most helpful, but all comments will be considered. Comments may be submitted to the Institute by e- mail at comments@lowimpacthydro.org with "Black River and Beebee Island Comments" in the subject line, or by mail addressed to the Low Impact Hydropower Institute, 329 Massachusetts Avenue, Suite 2, Lexington, MA 02420. Comments must be received at the Institute on or before 5 pm Eastern time on March 3, 2018 to be considered. All comments will be posted to the web site and the applicant will have an opportunity to respond. Any response will also be posted.

October 12, 2017: The Black River and Beebee Island Hydroelectric Projects have been granted an extension of the current term through June 30, 2018.

January 16, 2013: Erie Boulevard Hydropower, L.P. has submitted an application for recertification of the Black River and the Beebee Island Projects. The current certificate expires on December 7, 2012.

March 27, 2008: The Black River Hydroelectric Projects have been certified as low impact for a term of five years, effective December 7, 2007 and expiring December 7, 2012.