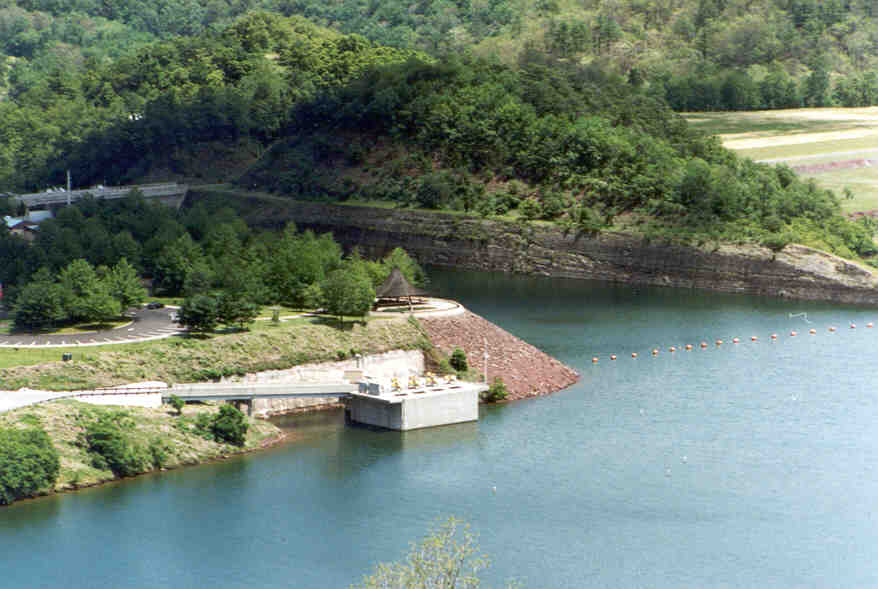 The Allegheny Electric Cooperative (AEC) operates the Raystown Hydroelectric Project (William F. Matson Generating Station) at Raystown Lake. The hydroelectric station, completed in 1988, is located at the base of Raystown Dam and is operated in close cooperation with the USACE which gives all flow and temperature regulating instructions to AEC. Constant flow discharges are adjusted on a daily basis to minimize river fluctuations downstream.
The project includes: an intake tower, intake tunnel, penstock, powerhouse, two generating units, and wheel gate. The hydroelectric facilities are separate from the USACE-owned dam.

Raystown Dam, which is 225 feet high, consists of a rolled earth and rockfill embankment with a gated spillway in the right abutment, the top 3.5 feet of ungated spillway being a fuse plug of erodible backfill material. The gated spillway is controlled by two 45-foot-square Tainter gates and is equipped with a warm water outlet system with a 4.75-foot by 6.75-foot slide gate served by inlet ports at three levels. There is a low-level outlet tunnel with two 5.5-foot by 10-foot gates.

The hydroelectric station intake tower has the capability of withdrawing water from different levels of the lake for downstream temperature control. Intake trashrack clear spacing is 3 inches. The concrete tunnel stretching from the intake tower to the powerhouse is 12 feet in diameter, steel-lined, and 930 feet long. The steel penstock is 12 feet in diameter and 550 feet long. There are two power-generating units in the powerhouse, with a combined capacity of 21 MW. Twenty-two adjustable wicket gates control flow through each unit. Flow is also regulated by the closure of two turbine shut-off valves located upstream of the generating units. Flow through the tunnel, penstock, and powerhouse can be regulated by the closure of a 12-foot square wheel gate located in the intake structure.

The project operates in a modified run-of-river mode and is situated at a USACE dam. Flows are controlled by the USACE and the project passes flows as mandated by the USACE. The project provides seasonal minimum flows of 200 cfs from May through November and 480 cfs from December through April. This flow regime was developed and approved in consultation with the USACE and the Pennsylvania Fish and Boat Commission (PFBC) to protect fish, wildlife, and water quality.

Waters within the project reach are designated as impaired for human uses due to pH and mercury contamination. While the source of the impairment is not known, the Pennsylvania Department of Environmental Protection has confirmed that the project is not the cause of the impairments in the project reach. Efforts have been made to mitigate these impairments upstream of the project by constructing limestone ponds, settling ponds, and wetlands to reduce metal concentrations and increase pH. Significant progress has been noted as a result of these mitigation efforts.

Historically, the Juniata River supported bountiful populations of American shad and American eel. Due to the development of four hydroelectric dams on the Susquehanna River in the early 1900s, the species were extirpated from the area around 15 years before the project was complete. Efforts to restore fish passage are being undertaken at several of the downstream dams.

The project lands consist of around 11.5 acres. No lands of significant ecological value exist in the project area.

PLUS-Standard: The Raystown Lake shoreline and adjacent lands are owned by the USACE. All undeveloped lands within a 300-foot area of the shoreline have been dedicated for conservation purposes.

While there are no known cultural or historic resources in the project area, the project consults with the State Historic Preservation Office prior to any construction or ground disturbing activities.

Recreational resources at the project include an Americans with Disabilities Act accessible fishing pier. Other recreation facilities are present but are managed by USACE, not the project. Public access is provided free of charge.

February 20, 2015: The Raystown Hydroelectric Project (FERC No. 2769), LIHI Certificate No. 23 has been determined by the Executive Director, Michael J. Sale to continue to satisfy the requirements of the Low Impact Hydropower Institute (LIHI) Certification Program. The Raystown Project is located on the Raystown Branch of the Juniata River, in Huntingdon County in south central Pennsylvania.

In rendering this Certification, the Institute’s Executive Director used authority delegated by the LIHI Governing Board and the unanimous recommendation by the LIHI Governing Board Technical Committee resulting from a full review of the Application Reviewer’s report and all public comments and additional materials provided by the Applicant.  The decision to certify the Raystown Creek Hydroelectric Project is for an 8-year term, effective August 11, 2014 and expiring August 11, 2022, with the following condition:

June 4, 2014: The Low Impact Hydropower Institute has received an application for a second term of certification of the Raystown Hydroelectric Project. The current certificate term is set to expire on August 11, 2014, but has been extended to March 31, 2015 to allow for internal review of the application for an additional term. The application materials can be found in the “Files” section below.

August 11, 2006: Allegheny Electric Cooperative has submitted an application for the certification of the Raystown Hydroelectric Project.