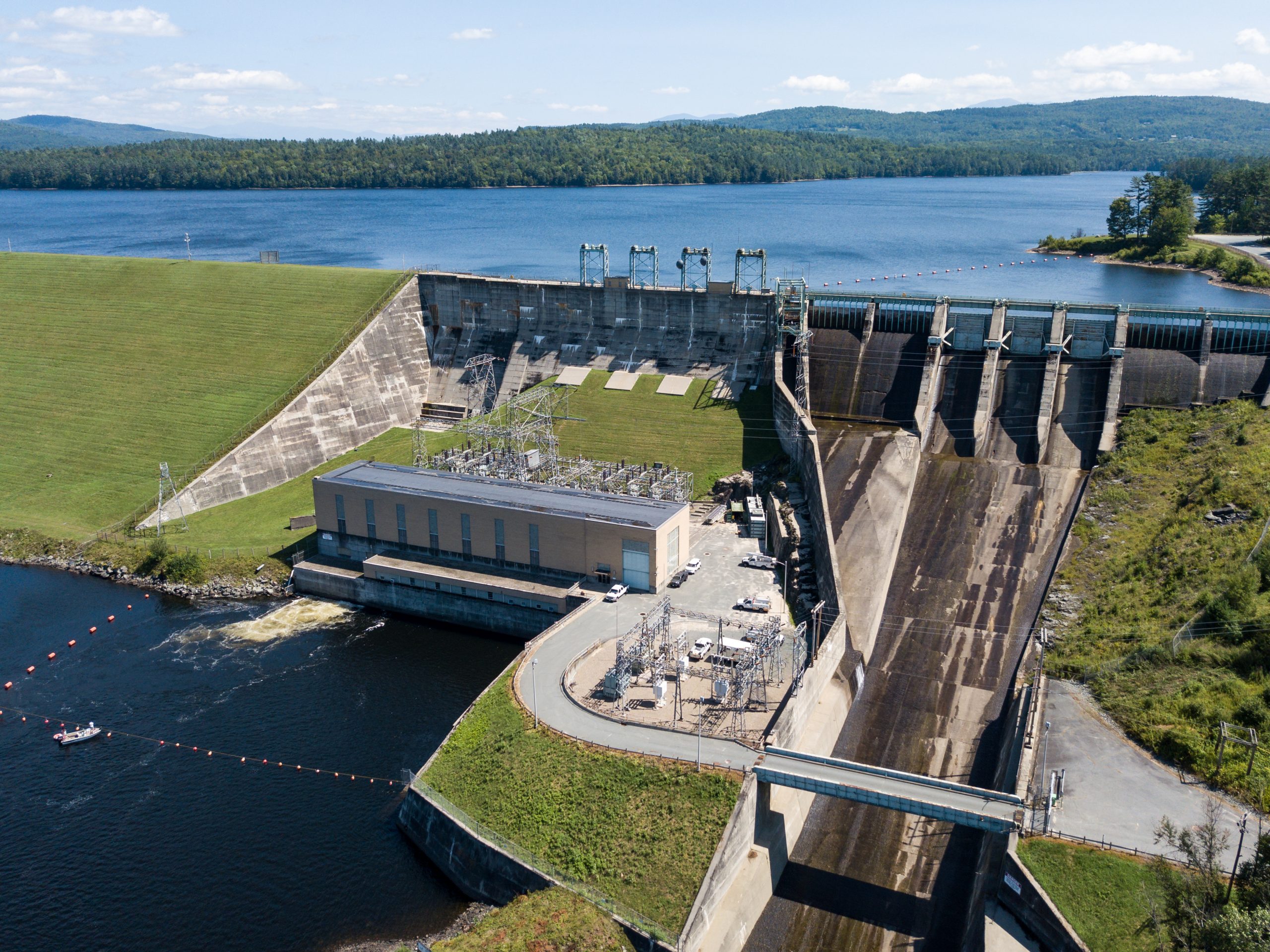 The Fifteen-Mile Falls Project is located on the Connecticut River in Grafton County, New Hampshire and Caledonia County, Vermont. The project is comprised of three developments – Moore, Comerford, and McIndoes. Comerford and McIndoes were constructed in the early 1930s, Moore was added later in 1956.

The project includes three developments, from upstream to downstream:

The Connecticut River forms the boundary between New Hampshire and Vermont. Thus, the two states agreed on a coordinated approach concerning water quality and issued a single water quality certificate for the project that addresses the interests of both states. The waters in the project reach are all listed for mercury and pH impairment. Mercury impairment is likely caused by atmospheric deposition from in-state and out-of-state sources. The project conducts water quality monitoring at five-year intervals of mercury in fish tissue. State fish consumption advisories are posted based on the monitoring results.

Downstream passage is no longer provided for Atlantic salmon smolts since the Connecticut River salmon restoration program ended. Upstream fish passage is not currently provided at the project. A triggering provision was included in the SA noting that the presence of 20 migrating adult salmon at the downstream East Ryegate Dam for two consecutive years would require upstream passage for Atlantic salmon. An American eel passage plan is ready to be implemented to provide upstream passage, if deemed necessary by resource agencies.

The project lands consist of 6,918 acres of open land around the project developments which has been protected in perpetuity under the terms of 2 separate conservation agreements. Additionally, the project established the Upper Connecticut River Mitigation and Enhancement Fund to mitigate the impacts of project operations. Funds are used to finance river and wetland restoration, protection and enhancement, acquisition of conservation easements, and mitigation of tax revenue impacts to nearby communities. A wildlife and forest management plan has been implemented at the project which provides guidance on protection of the scenic, forestry, and natural resources values of project lands.

PLUS-Standard: The project owner has contributed over $21 million to the Fifteen Mile Falls Enhancement Fund. Grants have provided for the protection of 3,122 acres of upland forest, farmland, wetland, riparian buffer, and river land representing well over 50% of the project’s developed and undeveloped shorelines.

Threatened or endangered species potentially present in the project vicinity include bald eagle, osprey, and dwarf wedgemussel. The project has developed a land management plan, in consultation with US Fish and Wildlife Service (USFWS), which integrates a threatened and endangered species management plan to ensure project operations do not adversely impact listed species. The dedication of several thousand acres to conservation easements contributes to these mitigation efforts and help to protect eagle and osprey roosting sites. USFWS noted that project operations do not impact dwarf wedgemussel populations.

Historic properties include each of the development’s dams and powerhouses. Additionally, there are several archaeological sites at the Moore and McIndoes developments. A cultural resources management plan was implemented at the project, based on consultation with the State Historic Preservation Office, to ensure proper stewardship of these resources.

Recreational resources at the project include a variety of fishing access points, picnic/day use areas, swimming areas, canoe portages, and boat ramps at each development. The McIndoes development has two camping areas and hiking trails. Public access is provided free of charge.

January 21, 2022: The Low Impact Hydropower Institute (LIHI) has received a complete recertification application from Great River Hydro for the Fifteen Mile Falls Project. The complete application can be found below.

LIHI is seeking comment on this application. Comments that are directly tied to specific LIHI criteria (flows, water quality, fish passage, etc.) will be most helpful, but all comments will be considered. Comments may be submitted to LIHI by e-mail at comments@lowimpacthydro.org with “Fifteen Mile Falls Project Comments” in the subject line, or by mail addressed to the Low Impact Hydropower Institute, 1167 Massachusetts Avenue, Office 407, Arlington, MA 02476. Comments must be received at the Institute on or before 5 pm Eastern time on March 22, 2022 to be considered. All comments will be posted to the web site and the applicant will have an opportunity to respond. Any response will also be posted.

January 24, 2018: Having reviewed information provided by the applicant as required in Condition 3 (text below), LIHI’s Executive Director has determined that Condition 3 is satisfied and Fifteen Mile Falls has earned an additional three years of Certification term. The Certificate term is therefore December 15, 2013 through December 14, 2021. (The decision letter is posted below under Files.)

July 10, 2015: Executive Director Michael J. Sale, using authority delegated from the LIHI Governing Board, has determined that the Fifteen Mile Falls Hydroelectric Project (FERC No. P-2077) continues to satisfy the LIHI Certification Criteria. The effective certification date for the Fifteen Mile Falls Project is December 15, 2013 for a five (5) year term, which will expire on December 15, 2018, with the following conditions:

January 27, 2014: The Low Impact Hydropower Institute has received an application from TransCanada for a second term of certification of the Vernon Station Hydroelectric Project. The 2013 application was received on December 5th, but due to administrative backlog, the certificate has been granted a three month extension beyond the date of December 15th. The application materials can be found in the “Files” section below.