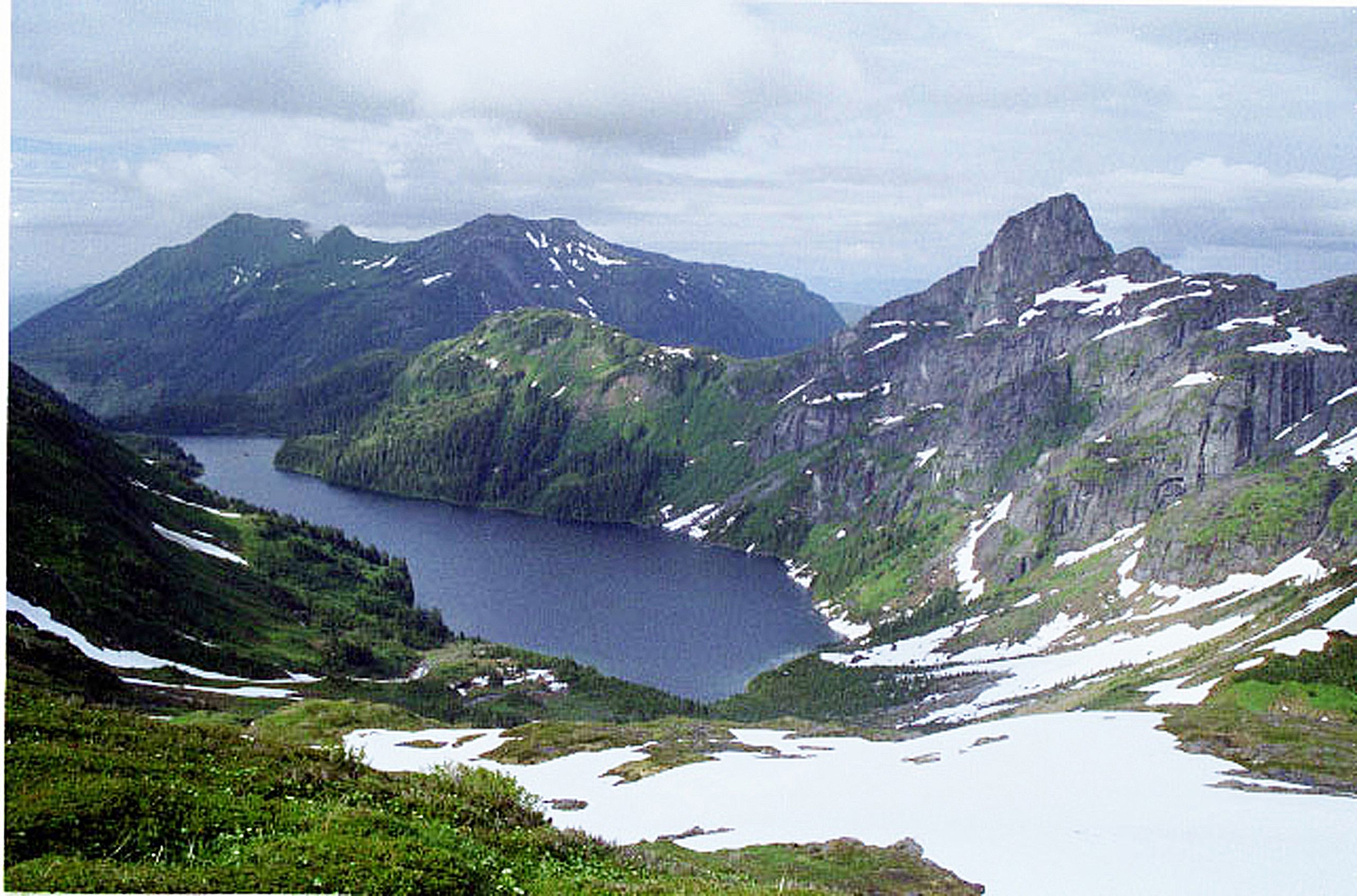 The project includes: a 600-foot-long siphon; a 30-inch-diameter penstock with a vacuum pump assembly and structure; a 30-inch-diameter penstock with a total length of 4,900 feet (820 feet buried intake and siphon, 1,930 feet supported on concrete saddles, and 2,150 feet buried to the powerhouse); a 44-foot by 67-foot powerhouse with two horizontal Twin-Jet Pelton turbines with total installed capacity of 4.5 MW; and a 4.5-mile-long, 34.5-kV overhead transmission line. The lake is used as a natural reservoir with no dam. The project is load-following.

A screened intake is used to prevent fish from entering the penstock. The siphon, which is set up on the crest of land at the edge of the lake, is used initially to draw water out of the lake. Once the siphon is established, water passes through a high-density polyethylene pipe (HDPE) and steel penstock to the valve house where flow can be turned on or shut off without losing the siphon. The valve house also has a bypass pipe for bypassing flows to the creek when additional water is needed in the reach below the powerhouse. When the valve is opened at the valve house, the water flows through approximately 4,900 feet of pipe, some of which is buried and some above ground, to the powerhouse and the turbine.

The water is pressurized by the amount of head the project has (i.e. 1,500-foot drop in elevation) and the small nozzle (needle) the water must pass through as it strikes the runner (a series of spoon-like protuberances on a wheel) in the turbine, which in turn turns the generator creating electric power.

The electric power is then transferred to the substation where a step-up transformer adjusts the current to the voltage that is needed on the electrical grid, in this case 34.5 kV. Switchgear in the powerhouse is located in the office where operations are monitored and adjusted to meet load demand. Operations can also be monitored from a remote location.

Waters within the project reach are designated pristine. No water bodies associated with the project are included on Alaska’s Listing of Impaired Waters.

The project lands consist of over 175 acres, 170 within the Tongass National Forest. The terrain around the reservoir shoreline is generally steep and primarily consists of bedrock and talus slopes. Active management was deemed unnecessary, and the US Forest Service oversees most of the project lands.

No recreational resources exist at the project. In lieu of recreation facilities, offsite mitigation efforts include funding of the Twelvemile Cabin in Tongass National Forest which is managed by US Forest Service. The cabin is a fully accessible resource on Twelvemile Inlet on Prince of Wales Island.

2022: No material changes or compliance issues were identified. The project remains in compliance based on the annual review. For Condition 1, the project reported no activity.

October 22, 2021: The Low Impact Hydropower Institute has issued a final decision on the recertification of the Black Bear Lake Project.  The 30-day appeal window closed on October 16, 2021 and no appeals were filed.  Therefore, the decision to certify the project is now final.  The new term is May 19, 2021 through May 18, 2026.

This decision is preliminary pending the 30-day appeal window. Only those who commented on the initial application during the 60-day comment period are eligible to file an appeal. Such appeal needs to include an explanation as to how the Project does not meet the LIHI criteria. Appeal requests can be submitted by email to comments@lowimpacthydro.org with “Black Bear Lake Project” in the subject line, or by mail addressed to the Low Impact Hydropower Institute, 1167 Massachusetts Ave, Office 407, Arlington, MA 02476. All requests will be posted to the website. The applicant will have an opportunity to respond and any response will also be posted. Requests must be received by 5 pm Eastern time on October 16, 2021. The full application and reviewer’s report are available below.

If no appeal requests are received and the decision becomes final, the Certification term for the Project will be May 19, 2021 through May 18, 2026.

LIHI is seeking comment on this application. Comments that are directly tied to specific LIHI criteria (flows, water quality, fish passage, etc.) will be most helpful, but all comments will be considered. Comments may be submitted to LIHI by e-mail at comments@lowimpacthydro.org with “Black Bear Lake Project Comments” in the subject line, or by mail addressed to the Low Impact Hydropower Institute, 1167 Massachusetts Avenue, Office 407, Arlington, MA 02476. Comments must be received at the Institute on or before 5 pm Eastern time on September 14, 2021 to be considered. All comments will be posted to the web site and the applicant will have an opportunity to respond. Any response will also be posted. The complete application can be found below.

As provided for in Section 4.2.5 of the LIHI Handbook, notice of the preliminary decision to certify was posted on the Institute’s website and sent to this stakeholder email distribution list on April 28, 2017.  A 30-day period was provided to anyone who commented on the original application to request an appeal, and no requests for appeal were received.

As provided for in Section 4.2.5 of the LIHI 2nd Edition Handbook, the Preliminary Certification Decision, along with the Application Reviewer’s report will be posted on the Institute’s Web page for 30 days.  Notice of the posting will be provided to all individuals or organizations that commented on the initial Application Package.

December 16, 2016: The Black Bear Lake certificate has been granted a third extension of the current certificate term. The new expiration date is June 30, 2017. See the extension letter for explanation below.

The Black Bear Lake comment period has been extended to January 19, 2017.

November 18, 2016: The Low Impact Hydropower Institute has received a complete application for a new term of Low Impact Certification for the Black Bear Lake Hydroelectric project. The application materials can be found in the Files section below.

LIHI is seeking public comment on this application.  Specifically, we are interested in knowing whether you think the Black Bear Lake project continues to meet the LIHI Low Impact Certification Criteria.  Please review the program and criteria in LIHI’s revised Handbook and then review the Project’s 2016 application materials posted on the project page.  Comments that are directly tied to specific LIHI criteria (flows, water quality, fish passage, etc.) will be most helpful, but all comments will be considered.  Comments may be submitted to the Institute by e-mail at comments@lowimpacthydro.org with “Black Bear Lake Project Comments” in the subject line, or by mail addressed to the Low Impact Hydropower Institute, PO Box 194, Harrington Park, New Jersey 07640.  Comments must be received at the Institute on or before 5 pm Eastern time on January 17, 2017 to be considered.  All comments will be posted to the web site and the applicant will have an opportunity to respond.  Any response will also be posted.

November 18, 2011: The Black Bear Lake Project continues to meet the Low Impact Hydropower Certification Criteria and has been certified for a second five year term, effective May 19, 2011 and expiring May 19, 2016.

April 30, 2011: Alaska Power and Telephone has submitted an application for recertification of the Black Bear Lake Hydroelectric Project.

May 19, 2006: Alaska Power and Telephone has submitted an application for certification of the Black Bear Lake Hydroelectric Project. A public comment period will be open for 60 days, until July 19, 2006.