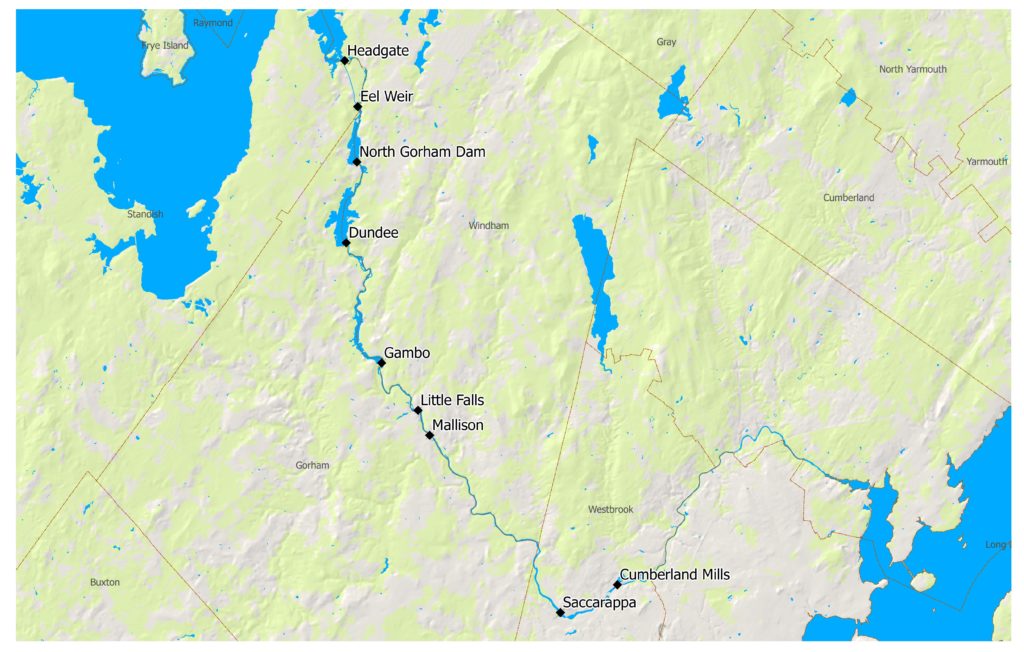 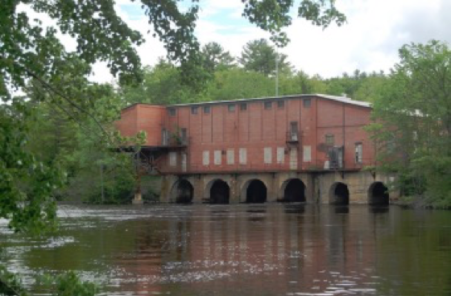 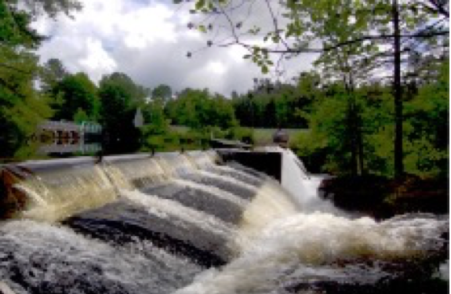 The Gambo Project is located on the Presumpscot River in Cumberland County, Maine. The project has been used almost continuously for hydroelectric generation since its original construction (c. 1850). The site was originally developed as a sawmill in the 18th century by Jonathan Lovett and was later part of the Oriental Gun Powder Mill until c. 1904. The current dam was built in 1912 by E.I. duPont de Nemours Company, which used the site to manufacture wood flour for dynamite until 1950. Between 1950 and 1960, the site was owned by the Town of Windham, U.S. Small Business Administration, and the Commercial Chemical Corp, but was not known to have been used. In 1960, Mr. Lawrence Keddy began to use the site to provide power to his Little Falls steel mill. He also sold some of the power to Central Maine Power Company. S.D. Warren (later renamed Sappi North America, Inc.) purchased the Gambo Project from the Commercial Chemical Corporation on October 18, 1974 and the John Phinney property on the Gorham side of the River in 1978. On the Presumpscot River there are six hydroelectric facilities between Sebago Lake and the Atlantic Ocean in Portland, Maine. The Gambo project is the fourth hydroelectric project downstream of the Sebago Lake outlet. Upstream projects include Eel Weir (LIHI #137), North Gorham (LIHI #129), and Dundee (LIHI #138). Downstream projects include Little Falls (LIHI #140) and Mallison Falls (#141).

The project includes the dam, spillway, canal intake, powerhouse, two turbines, bypass reach, and upstream passage facilities. The dam is a 300-foot-long, 24-foot-high reinforced concrete structure, consisting of a 250-foot-long overflow section. One-foot-four-inch-high wooden flashboards exist on the spillway section of the dam. The canal intake structure is 50 feet long leading to a sluice gate structure and a 737-foot-long, 15-foot-deep concrete-lined intake canal. The powerhouse is a concrete and brick structure containing two vertical Francis turbines direct connected to generators with a total installed capacity of 1.9 MW. The project bypass reach is 300-foot-long and free-flowing between the dam and powerhouse tailwaters. An 8-mile-long, 11-kV transmission line connects the project to the electrical grid.

The project operates in run-of-river mode and impounds a 151-acre reservoir. The project provides a minimum flow of 66 cfs. 100 cfs is required when the water temperature exceeds 22°C before 8:00am at the Gambo impoundment in order to meet and maintain Class B dissolved oxygen criteria. Impoundment fluctuations are limited to 1-foot from the crest of the dam and are monitored by pressure sensors. The flow regime was developed in accordance with Maine Department of Environmental Protection and Maine Department of Marine Resources standards for fishery protection and riverine habitat suitability.

Waters within the project reach are designated Class B and have been historically impaired for low dissolved oxygen levels. Monitoring conducted by MEDEP has confirmed that increased minimum flows provided by the project have resulted in full attainment of the dissolved oxygen standard.

Downstream dams prevent anadromous fish passage at the project. With the 2019 FERC license amendment incorporating an amended water quality certification and revised USFWS terms, anadromous fish passage is no longer required during the current FERC license term.  Eel passage facilities were installed in 2007 and have been updated to provide more effective access for American eel passage. From September 1 through October 31, the project shuts down operations for 8 hours starting at sunset. This facilitates downstream migration of American eel. Shutdowns are coordinated with MDMR and US Fish and Wildlife Service to determine the most effective timing. Flows pass over the spillway and ensure safe migration into the bypass reach.

The project property consists of 25 acres not including the impoundment. A shoreline management plan was developed to maintain a buffer zone for the protection of sensitive plant species, aesthetic resources, and recreational access. The SMP was developed in consultation with the National Park Service, Maine State Planning Office, MDIFW, and the Casco Bay Estuary Project. The buffer zone pertains to all project lands within 200 feet of the normal high-water elevation.

Threatened and endangered species potentially within project vicinity include: Northern Long-eared bat, Eastern Small-footed Bat, Little Brown Bat, Brook Floater, Least Bittern, Upland Sandpiper, Eastern Box Turtle, Spotted Turtle. Activities with the potential to affect the listed species include: removal of large trees that may provide roosting habitat for the bats; exposure/dewatering of the Brook Floater mussel during significant, prolonged impoundment drawdowns, loss of or fragmentation of habitat due to development for the Least Bittern, Upland Sandpiper, and Spotted Turtle, direct taking of Box Turtles for pets. The project owner expressed that none of these activities are planned at the project.

Cultural resources in the project vicinity include the Cumberland and Oxford Canal, the Oriental Powder Mill Complex, and the Gambo Pony Truss Bridge. The project owner submits annual reports to the State Historic Preservation Office and the Penobscot Indian Nation detailing activities conducted under its historic properties management plan.

Recreational resources at the project include a canoe portage trail, a walk-in angler access point, and a car-top boat launch.

Condition partially satisfied in 2022 with completion of modifications. Condition 1: The Owner shall notify LIHI when the modifications to the Project to improve upstream eel passage are completed and submit copies of MDMR and USFWS comments related to whether these modifications are sufficient, and/or if additional effectiveness testing is required to confirm that eels are safely passing upstream at the Project. If additional testing is required, the schedule and final results along with agency comments on the report, agency recommendations for modifications, and plans and schedule for any needed modifications to shall also be provided to LIHI.

Condition 2. The Owner shall update LIHI on the following activities in the annual LIHI compliance statement:

b) Satisfied in 2019 with FERC amendment. The status of upstream and downstream anadromous fish passage activities at the Project and at the Saccarappa Project. The updates should include summaries of agency and stakeholder consultation and recommendations made, any changes in the fish passage plans from those described in the LIHI application, and any changes in passage requirements or the timing of implementation at both Projects. LIHI reserves the right to suspend its certification if the agencies do not determine that safe passage at the Project is being provided and that such passage needs have not been waived.

c) A summary of any consultation with MIF&W and/or USFWS related to state or federally listed species identified as possibly occurring at the site that could be impacted by construction activities or non-routine operations or maintenance activities. This would also include impoundment drawdowns that would expose a significant portion of the river bottom, among other non-routine activities. A summary of the relevant triggering activities and the measures implemented during the year to protect such species shall also be provided.

March 5, 2018 – The 30-day appeal window closed for the preliminary certification decision of the Gambo Hydroelectric Project closed on March 1, 2018 with no appeals to the decision received. The decision is therefore final and Dundee is LIHI Certificate #138. The Certificate term will be September 5, 2017 – September 4, 2022.

January 30, 2018 – On January 24, 2018, the Low Impact Hydropower Institute (LIHI) preliminarily approved Low Impact Certification for the Gambo project. This decision is preliminary pending the 30-day appeal window. Only those who commented in the initial application 60-day comment period are eligible to file an appeal. Such appeal needs to include an explanation as to how the project does not meet the LIHI criteria. Appeal requests can be submitted to comments@lowimpacthydro.org. Requests must be received by 5:00 pm Eastern time March 1, 2018.

LIHI is seeking comment on the Gambo application for certification. Comments that are directly tied to specific LIHI criteria (flows, water quality, fish passage, etc.) will be most helpful, but all comments will be considered.  Comments may be submitted to the Institute by e-mail at comments@lowimpacthydro.org with “Gambo Project Comments” in the subject line, or by mail addressed to the Low Impact Hydropower Institute, 329 Massachusetts Avenue, Suite 2, Lexington, MA 02420.  Comments must be received at the Institute on or before 5 pm Eastern time on November 7, 2017 to be considered.  All comments will be posted to the web site and the applicant will have an opportunity to respond.  Any response will also be posted.