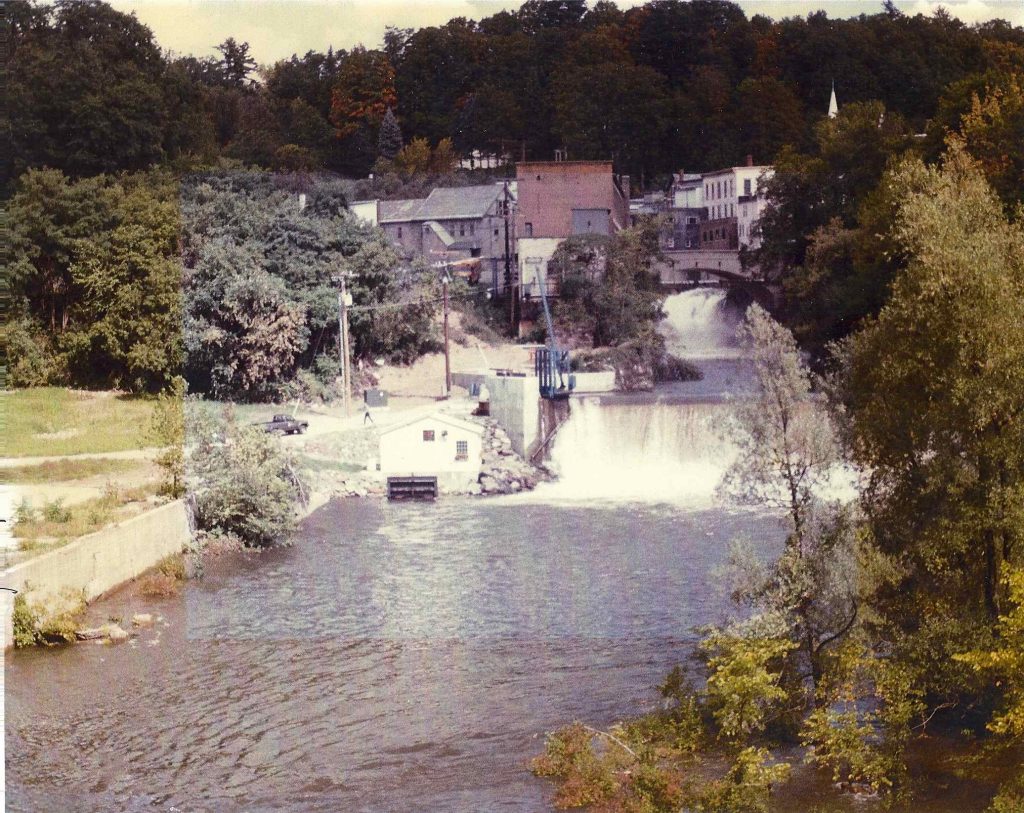 The project includes: a concrete gravity dam, powerhouse, penstock, and one horizontal Kaplan turbine with a capacity of 0.4 MW. The powerhouse is integral to the dam and constructed of reinforced concrete to an elevation greater than the 100-year flood level. A steel penstock 8 feet in diameter and 80 feet in length conducts water from the intake to the powerhouse.

The project operates in a run-of-river mode and impounds a 1-acre reservoir. The project provides a minimum flow of 0.5-inches of spillage over the crest of the dam. This flow regime was developed in consultation with the Vermont Department of Environmental Conservation (VDEC).

Waters within the project reach are designated as “Good” with the exception of a 2.5-mile stretch downstream just above the confluence with the Connecticut River as it is impaired for municipal sewer discharges.

Downstream fish passage is facilitated by a downstream chute cut into the dam along with a sluice and slide. This passage is now operated as requested by VDEC during the spring and fall seasons to protect resident fish species.

PLUS-Standard: The project voluntarily operates its downstream fish passage from April 1 through June 15 and from September 15 through November 15 or as otherwise requested by state fisheries agencies.

The project lands consist of roughly 1 acre. The impoundment has some tree-lined shoreline, but the project is primarily surrounded by industrial buildings in the urban downtown of Springfield, VT. No lands of significant ecological value exist in the project area.

As confirmed by US Fish and Wildlife Service, there are not any federally or state listed species in the project area or downstream reach of the project.

Historical resources in the project area include the Slack Chimney, a National Register listed property. The project owner consults with the State Historic Preservation Office to ensure protection of the property.

2021: There were no reported changes or compliance issues, and no changes in condition status. For Condition 2, the downstream fishway was operational as required. The project remains in compliance based on the annual review.

2020: There were no reported changes or compliance issues, and no changes in condition status. For Condition 2, the downstream fishway was operational as required. The project remains in compliance based on the annual review.

2019: There were no reported changes or compliance issues, and no changes in condition status. For Condition 2, the downstream fishway was operational as required. The project remains in compliance based on the annual review.

2018: There were no reported changes or compliance issues, and no changes in condition status. For Condition 2, the downstream fishway was operational as required. The project remains in compliance based on the annual review.

2016-2017: Annual reporting for the current Certificate has not yet taken effect.

May 11, 2017: The Low Impact Hydropower Institute has issued a Preliminary Certification Decision that the Slack Dam Hydroelectric Project (FERC No. P-8014) satisfies the LIHI Certification Criteria.  This certification qualifies for one PLUS standard on downstream fish passage and protection which extends the standard term from five years to eight years.

As provided for in Section 4.2.5 of the LIHI 2nd Edition Handbook, the Preliminary Certification Decision, along with the Application Reviewer’s report and (if prepared) report of the Executive Director, will be posted on the Institute’s Web page for 30 days, beginning May 12, 2017 and ending on June 11, 2017.  Notice of the posting will be provided to all individuals or organizations that commented on the initial Application Package.

Any Commenter may submit a letter to the Executive Director requesting an appeal within the 30-day period.  The appeal request must state specific reasons why the hydropower facility should have failed one or more criteria.  Only individuals or organizations that commented on the initial Application Package may file an appeal.  Further information about the LIHI appeal process is available in the LIHI Handbook, available at https://lowimpacthydro.org/certification-program-html/.

If no appeal is requested within the 30-day period, the Executive Director will issue LIHI Certification for the facility and post a notification of certification on the Institute’s website.  Once final, the effective certification date for the Slack Dam Project is February 28, 2016 for an eight (8) year term, which will expire on February 28, 2024.

March 8, 2017: The Low Impact Hydropower Institute has received a complete application for a new term of Low Impact Certification for the Slack Dam Hydroelectric project. The application materials can be found in the Files section below.

LIHI is seeking public comment on this application.  Specifically, we are interested in knowing whether you think the Slack Dam project meets the LIHI Low Impact Certification Criteria, as revised in the 2nd Edition Handbook released in March 2016.  Please review the program and criteria in LIHI’s revised Handbook and then review the Project’s 2016 application materials posted on the project page.

Comments that are directly tied to specific LIHI criteria (flows, water quality, fish passage, etc.) will be most helpful, but all comments will be considered.  Comments may be submitted to the Institute by e-mail at comments@lowimpacthydro.org with “Slack Dam Project Comments” in the subject line, or by mail addressed to the Low Impact Hydropower Institute, PO Box 194, Harrington Park, New Jersey 07640.  Comments must be received at the Institute on or before 5 pm Eastern time on May 7, 2017 to be considered.  All comments will be posted to the web site and the applicant will have an opportunity to respond.  Any response will also be posted.

February 28, 2011: Springfield Hydroelectric Company has submitted an application for the certification of the Slack Dam Project. Public comment period will be open for 60 days.