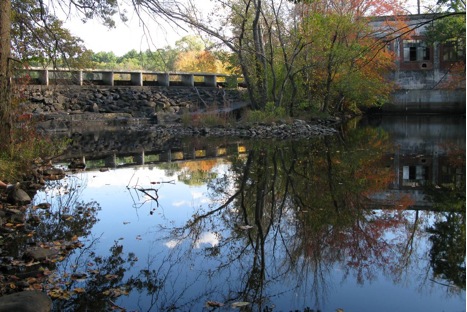 The Mechanicsville dam was originally constructed in the mid 1800s. It was upgraded by the Putnam Light and Power Company in 1922 when the hydroelectric powerhouse and civil works were originally constructed. Initially, the Project diverted flows from the Quinebaug River into the Mechanicsville Dam impoundment on the French River. This tripled the flow of water in the Project area used to produce power. Following a devastating hurricane in 1936, the powerhouse was flooded, and the Project was abandoned. In the early 1980s, the abandoned site was purchased but not developed, and then sold again and rehabilitated in the late 1980s.

The project includes a granite block dam, 200 feet long with a height of 20 feet to the top of the bridge structure and15 feet to the top of the flashboard elevation; a brick and concrete powerhouse with two turbine-generators, one a vertical semi-Kaplan and the other a vertical Francis unit. The combined installed capacity is 0.337 MW; a 35-foot long forebay with an average width of 30 feet and depth of 8.5 feet; and a 100 feet long by 55 feet wide tailrace.

The powerhouse is located adjacent to the dam and has virtually no bypass reach.

The project operates in a run-of-river mode and impounds a 48-acre reservoir. The project provides a minimum flow of 22 cfs via sluices in the dam structure for the protection of water quality, aquatic resources, and aesthetic values. A Programmable Logic Controller continuously monitors pond elevation and adjusts the opening of the turbine runner to use more or less water, maintaining pond elevation. This flow regime was developed in consultation with Connecticut Department of Energy and Environmental Protection (CTDEEP) and USFWS.

Waters within the project reach are not listed on the state impaired waters list, though a downstream section of the river is listed for recreation impairment due to e. coli, however this impairment was not found to be caused by the project via consultation with CTDEEP. The French River also exhibits low dissolved oxygen concentrations in some river reaches. The project’s minimum flow acts as a means to reaerate the water.

Historically, the Shetucket River Basin which includes the French and Quinebaug Rivers has supported spawning and nursing habitat for several migratory species including river herring, American shad, sea lamprey, American eel, and sea-run trout. Access to these habitats was eliminated in the mid-to-late 1800s when the first dams were constructed. Shad and river herring were obstructed by Cargill Falls on the Quinebaug River downstream of the Putnam project, but the falls were most likely not a barrier to salmon, sea lamprey, and eel, allowing them to have free access to the French River. Restoration efforts are currently underway in the basin, though not specifically in the French River. Upstream American eel passage is facilitated at the project by a Delaware style eel ladder along the face of the dam which is deployed from July through September. The project ceases generation on rainy nights from dusk until dawn from September 1 through November 15 to support eel downstream passage. Other resident species include largemouth bass, chain pickerel, pumpkinseed, white sucker, and brown bullhead.

The project lands consist of less than one acre. Wetlands monitoring conducted at the project concluded that operations have no adverse impact on the project shoreline. Additionally, a coalition of local river stewards and the Natural Resources Conservation Service of the US Department of Agriculture worked together to initiate riparian plantings throughout the French River. The coalition planted native perennials, shrubs, trees, and recreation amenities along 1,000 feet of shoreline with a rain garden and small park as a means to provide a riparian buffer while providing new recreation opportunities.

April 8, 2021: The Low Impact Hydropower Institute (LIHI) has preliminarily approved recertification of the Mechanicsville Project for a new 5-year terms of Low Impact Certification. The certification does not include any conditions.

This decision is preliminary pending the 30-day appeal window. Only those who commented on the initial application during the 60-day comment period are eligible to file an appeal. Such appeal needs to include an explanation as to how the Project does not meet the LIHI criteria. Appeal requests can be submitted by email to comments@lowimpacthydro.org with “Mechanicsville Project” in the subject line, or by mail addressed to the Low Impact Hydropower Institute, 1167 Massachusetts Ave, Arlington MA 02476. All requests will be posted to the website. The applicant will have an opportunity to respond and any response will also be posted. Requests must be received by 5 pm Eastern time on May 8, 2021. The application and reviewer’s report is available below.

If no appeal requests are received and the decision becomes final, the Certification term for the Project will be January 27, 2021 through January 26, 2026.

February 2, 2021: The Low Impact Hydropower Institute (LIHI) has received a complete recertification application from Saywatt Hydroelectric, LLC for the Mechanicsville Project located on the French River in Connecticut.

LIHI is seeking comment on this application. Comments that are directly tied to specific LIHI criteria (flows, water quality, fish passage, etc.) will be most helpful, but all comments will be considered. Comments may be submitted to LIHI by e-mail at comments@lowimpacthydro.org with “Mechanicsville Project Comments” in the subject line, or by mail addressed to the Low Impact Hydropower Institute, 1167 Massachusetts Avenue, Office 407, Arlington, MA 02476. Comments must be received at the Institute on or before 5 pm Eastern time on April 4, 2021 to be considered. All comments will be posted to the web site and the applicant will have an opportunity to respond. Any response will also be posted.

The complete application can be found below along with the prior recertification application, and the prior review report under the 2nd Edition Handbook, as well as the other relevant documents.

As provided for in Section 4.2.5 of the LIHI 2nd Edition Handbook, notice of the preliminary decision to certify was posted on the Institute’s website and sent to the stakeholder email distribution list on January 16, 2017. A 30-day appeal period was provided to anyone who commented on the original application to request an appeal, and no requests for appeal were received.

October 27, 2016: The Low Impact Hydropower Institute has received a complete application for a new term of Low Impact Certification for the Mechanicsville Hydroelectric project. The application materials can be found in the Files section below.

LIHI is seeking public comment on this application.  Specifically, we are interested in knowing whether you think the Mechanicsville project continues to meet the LIHI Low Impact Certification Criteria.  Please review the program and criteria in LIHI’s revised Handbook and then review the Project’s 2016 application materials posted on the project page.  Comments that are directly tied to specific LIHI criteria (flows, water quality, fish passage, etc.) will be most helpful, but all comments will be considered.  Comments may be submitted to the Institute by e-mail at  with “Mechanicsville Project Comments” in the subject line, or by mail addressed to the Low Impact Hydropower Institute, PO Box 194, Harrington Park, New Jersey 07640.  Comments must be received at the Institute on or before 5 pm Eastern time on December 27, 2016 to be considered.  All comments will be posted to the web site and the applicant will have an opportunity to respond.  Any response will also be posted.

May 4, 2012:   The public notice period announcing the material change at Mechanicsville which adds generating capacity to the existing powerhouse by installing a second generating unit has passed and no public comments were received. The application reviewer recommended continuing the certification with the project reconfigured as proposed and authorized by FERC (exemption amendment order of March 29, 2012). The Institute’s Governing Board received and reviewed the proposal at its May 3, 2012 meeting, and voted to confirm that the facility would continue to comply with the LIHI criteria subsequent to completion of the material change to the facility and that there would be no revocation or modification of the certification. The Certificate term dates also remain unchanged, with the effective date of January 27, 2011, and expiring January 27, 2016.  See Material Change Decision Letter, 2012 below.

“The Exemptee is proposing to add an additional turbine-generator unit rated at 96 kW to the already existing turbine-generator unit rated at 225 kW, in order to closely match the authorized capacity of 325 kW. In addition, the exemptee proposes to amend the flashboard operation by having flashboards in year round, modifying the height during specific times (i.e. using 2-feet high flashboards from October 1 through June 30 and 1-foot high flashboards from July 1 through September 30). Lastly, the exemptee proposes to lower the minimum start flow from 86 cfs to 60 cfs, which is a result of the lower hydraulic capacity of the second proposed turbine (38 cfs) and the existing bypass flow requirement (22 cfs).”

The public comment period on this application will remain open until April 18, 2012.

July 28, 2011: The Mechanicsville Hydroelectric Project has been certified as low impact for a five year term, effective January 27, 2011 and expiring January 27, 2016.

February 2, 2011: Saywatt Hydroelectric, LLC has submitted an application for the certification of the Mechanicsville Hydroelectric Project.