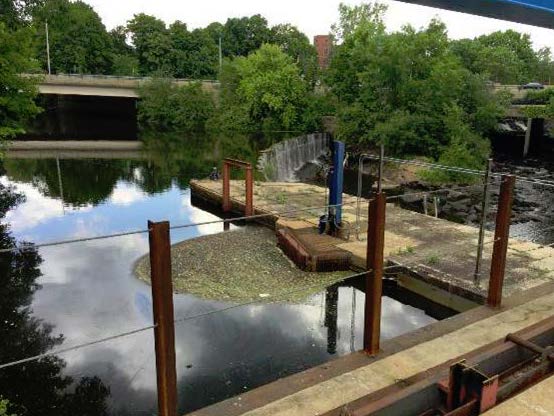 The Quinebaug – Five Mile Pond Project is located at the confluence of the Five Mile River and Quinebaug River in the Towns of Brooklyn and Killingly in Windham County, Connecticut. The two developments, Quinebaug and Five Mile Pond are located in close proximity, but on different rivers, and authorized under the same FERC license. The project was built and started operation in 1990 by Diamond Power Corporation at dams originally constructed around 1885. The Five-Mile Pond development is the first and only hydropower facility on the Five Mile River though several non-powered dams are located upstream of the project including the Old Daniels Dam, Ballouville Dam, and two unnamed dams. The Quinebaug development has several dams upstream of it, some used for flood control, mills, or hydropower. These include the Rogers Dam, Cargill Falls, Putnam (LIHI #3), MSC, and the US Army Corps of Engineers’ West Thompson flood control dam located on the French River just upstream of its confluence with the Quinebaug River. Downstream of the development are the Aspinook (Wyre Wind), Tunnel Dam, and Greenville dams.

The flow regimes were developed via recommendation from US Fish and Wildlife Service to maintain suitable aquatic habitat. Run-of-river operations are maintained using a Programmable Logic Controller to adjust gate settings appropriately.

The Quinebaug River waters are designated as Class B. These waters are managed for aquatic and wildlife habitat, agricultural/industrial water supply, and recreation activities. Some upstream and downstream areas within the reach of the Quinebaug development have been classified as non-supporting for aquatic life and/or recreation due to E. coli. According to the Connecticut Department of Energy and Environmental Protection (CTDEEP), hydropower operations are not listed as a potential source of this impairment. As for the Five Mile River, the waters are not listed as impaired and consultation with CTDEEP concluded that the project operations had no adverse impacts on water quality.

Downstream dams create barriers to fish passage at both developments. Ongoing restoration efforts are targeted at American shad, blueback herring, and alewife, all of which were once common in the Thames River Basin of which the Quinebaug River is a part. Spawning runs of the species were extirpated in the mid-to-late 1800s due to the construction of dams. Spawning and nursing habitat for river herring, shad, sea lamprey, and American eel remains above the dams. Fish passage provisions are currently being developed at the downstream Wyre Wind Project which, upon completion, will make the Quinebaug project the next barrier to upstream fish passage. A cascade at the mouth of the Five Mile River downstream of the Five Mile Pond damforms a natural historic barrier to anadromous species passage but provisions for future passage for American eel have been identified. Trashracks with 3-inch spacing at the Quinebaug development and 2-inch spacing at the Five Mile Pond development mitigate potential for entrainment and impingement along with the low approach velocity, below the standard recommended 2 feet/second. Five Mile Pond also allows for downstream passage via the minimum flow notch in the spillway flashboards, leading to the bypassed reach.

The project lands consist of roughly 4 acres. Half of these lands are tree or brush covered while the other half is urban/developed. No lands of significant ecological value exist in the limited footprint of the project and its run-of-river operations minimize disturbance to the shoreline and watershed resources at either development.

Threatened or endangered species potentially present in the project vicinity include the Northern long-eared bat. A primary concern for the species is habitat disruption via tree/vegetation maintenance. Regular maintenance at the Quinebaug development includes vegetation removal; mainly lawn mowing and brush upkeep. The Five Mile development is surrounded by dense residential and urban land use. Through consultation with the Connecticut State Natural Diversity Database, no critical habitats for the bats were identified in the project area and it is further unlikely that the species is present due to the projects small area and urban location.

Historic structures near the project reach include remains from the Quinebaug Mill – Quebec Square Historic District, listed on the National Register of Historic Places. Any land-disturbing activities must be preceded by consultation with the State Historic Preservation Office.

There are no formal recreation facilities at the project. Public access is provided free of charge but only where safe. Boat barriers are in place upstream of the dams and informal fishing access is provided at the confluence of the Quinebaug and Five Mile Rivers and in the project impoundments. Public use of any informal recreation areas has historically been limited.

2022: No material changes or compliance issues were identified. The project remains in compliance based on the annual review.  The project started FERC relicensing with filing of the PAD on February 28, 2022. For Condition 1, the project reported no change in status.

2021: There were no reported changes or compliance issues. The project remains in compliance based on the annual review. For Condition 1, the project reported no change in status.

2020: There were no reported changes or compliance issues. The project remains in compliance based on the annual review. For Condition 1, the project reported no change in status.

This decision is preliminary pending the 30-day appeal window. Only those who commented on the initial application during the 60-day comment period are eligible to file an appeal. Such appeal needs to include an explanation as to how the Project does not meet the LIHI criteria. Appeal requests can be submitted by email to comments@lowimpacthydro.org with “Quinebaug – Five Mile Pond Hydroelectric Project” in the subject line, or by mail addressed to the Low Impact Hydropower Institute, 329 Massachusetts Ave, Suite 6, Lexington, MA 02420. All requests will be posted to the website.  The applicant will have an opportunity to respond and any response will also be posted. Requests must be received by 5 pm Eastern time on December 1, 2019.  The full application and reviewers report are available below.

June 24,2019: The Low Impact Hydropower Institute has received a complete application for Low Impact Certification of the Quinebaug – Five Mile Pond Hydroelectric Project.  LIHI is seeking public comment on this application.  Specifically, we are interested in knowing whether you think the Project meets the LIHI Low Impact Certification Criteria, as revised in the 2nd Edition Handbook.  Please review the program and criteria in LIHI’s revised Handbook and then review the Project’s application materials below.

Comments that are directly tied to specific LIHI criteria (flows, water quality, fish passage, etc.) will be most helpful, but all comments will be considered.  Comments may be submitted to the Institute by e-mail at comments@lowimpacthydro.org with “Quinebaug – Five Mile Pond Project Comments” in the subject line, or by mail addressed to the Low Impact Hydropower Institute, 329 Massachusetts Avenue, Suite 6, Lexington, MA 02420.  Comments must be received on or before 5 pm Eastern time on August 23, 2019 to be considered.  All comments will be posted to the web site and the applicant will have an opportunity to respond.  Any response will also be posted.