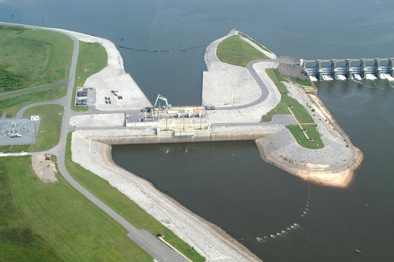 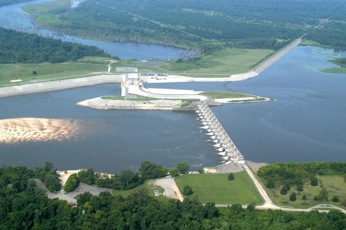 The dam consists of a gated spillway and an earthfill overflow and non-overflow embankments. The spillway section is a straight concrete gravity type structure with a crest length of 1,130 feet and maximum height of 54 feet. Sixteen conventional tainter gates in the spillway control the upstream pool level and river flows. The USACE constructed a non-overflow earth embankment on the west end of the dam which blocked the original Arkansas River channel creating a 7-mile-long oxbow lake with a small dam at the outlet of the oxbow that discharges back to the main river channel approximately 1.85 miles downstream of the dam. The access road to the dam is located on this non-overflow embankment which measures 3,150 feet in length. In the mid 1990’s, the hydropower project began construction as an integral part of this embankment. The hydropower project was completed and began operation in 1999. The powerhouse contains three horizontal-shaft, bulb-type, axial-flow hydraulic turbine-generator units with a total installed capacity of 108 MW. The powerhouse trashracks have a horizontal clear spacing of 5 inches.

The project operates in a run-of-river mode and uses the flow available in the Arkansas River as regulated by the USACE. The hydro facility at the dam has no control over flow releases or impoundment fluctuations. Operations are managed by a Memorandum of Agreement (MOA) entered into by the project owner and USACE. Leakage through the dam gate seals provides at least 50-200 cfs of flow. Additionally, the Arkansas Fish and Game Commission controls flows through a small conduit in the dam’s earthen embankment so that the oxbow does not become stagnant in summer months. The project only operates when river flow is between 4,000 and 53,400 cfs. This flow regime is detailed in the MOA and US Fish and Wildlife Service (USFWS) has concluded that the hydropower project is not responsible for any adverse flow-related effects to fish and wildlife resources.

Waters within the project reach are suitable for primary and secondary contact recreation, water supply, and aquatic life and habitat. The reach upstream of the dam is not listed for any impairments but the downstream reach is impaired due to low dissolved oxygen concentrations. The Arkansas Department of Environmental Quality (ADEQ) and USFWS were consulted to determine the cause of the impairment. ADEQ and USFWS concluded that project operations were not the cause of the impairment and also stated that operations were unlikely to cause any adverse impact on water quality standards in the river.

The Arkansas River is host to a diverse fish community, common amongst tributary rivers in the Mississippi River Basin. Resident species include lamprey, sturgeon, paddlefish, gar, herring, cyprinids, sucker, catfish, sunfish, walleye, and drum. Northern snakehead and Asian carp, two invasive species, are also present in the project vicinity. American eel is the only migratory species in the project area, no anadromous species are present. No barriers to upstream passage exist at the project though passage is limited and available through the USACE Arkansas Post Canal. Fish can also pass upstream into the oxbow during periods when the lower Arkansas River backwaters and overflows the low dam at the downstream end of the oxbow. Arkansas Game and Fish Commission has conducted feasibility studies for American eel passage facilities at the project, but plans have yet to progress beyond the design phase. Downstream passage is available through the Arkansas Post Canal or through the dam during normal flow periods.

The project lands consist of 147 acres. The project owner does not have any control of impoundment waters and USACE is responsible for maintaining the shoreline which is primarily comprised of riprap covered slopes. Land use in the project vicinity is primarily undeveloped and forested with some recreational use (fishing and camping). No lands of significant ecological value nor any critical habitats for threatened/endangered species exists in the project area.

Threatened or endangered species potentially present in the project vicinity include the eastern black rail, interior least tern, whooping crane, pallid sturgeon, fat pocketbook mussel, pink mucket mussel, rabbitsfoot mussel, Northern long-eared bat, opaque prairie sedge, prairie evening-primrose, rein orchid, snowy orchid, pineywoods dropseed, and Arkansas meadow-rue. Consultation with USFWS determined no effects to the pallid sturgeon, fat pocketbook mussel, and least tern, which may occur in close proximity to the project. USFWS stated that any effects to the species are the result of the USACE dam and cannot be attributed to the hydropower project. The listed species are unlikely to be affected by the project’s run-of-river operations, lack of control of dam operations, the small project boundary, and the limited number of trees in the project boundary minimize any potential for impact on listed species.

The only cultural resource in the project area is an archaeological site that was partly damaged and buried under dredge spoil as a result of the USACE Arkansas Post Canal excavation which took place before the hydro project construction. Should further resources be discovered in the project area, the project owner must consult with the State Historic Preservation Office.

Recreational resources at the project include a boat ramp, basketball court, and handicap-accessible fishing access. Pendleton Bend Park is located nearby and includes twenty public campsites. Public access is provided free of charge.

August 20, 2020: The Low Impact Hydropower Institute (LIHI) has preliminarily approved the Arkansas River Dam No. 2 Project (LIHI #51) for a new 5-year term of Low Impact Certification. There is one condition on the Certificate.

This decision is preliminary pending the 30-day appeal window. Only those who commented on the initial application during the 60-day comment period are eligible to file an appeal. Such appeal needs to include an explanation as to how the Project does not meet the LIHI criteria. Appeal requests can be submitted by email to comments@lowimpacthydro.org with “Arkansas Dam Project” in the subject line, or by mail addressed to the Low Impact Hydropower Institute, 329 Massachusetts Ave, Suite 6, Lexington, MA 02420. All requests will be posted to the website. The applicant will have an opportunity to respond and any response will also be posted. Requests must be received by 5 pm Eastern time on September 19, 2020. The full application and reviewer’s report are available below.

If no appeal requests are received and the decision becomes final, the Certification term for the Project will be January 19,2020 through January 18, 2025.

LIHI is seeking public comment on this application. Comments that are directly tied to specific LIHI criteria (flows, water quality, fish passage, etc.) will be most helpful, but all comments will be considered.  Comments may be submitted to the Institute by e-mail at comments@lowimpacthydro.org with “Arkansas River Dam No. 2 Project Comments” in the subject line, or by mail addressed to the Low Impact Hydropower Institute, 329 Massachusetts Avenue, Suite 6, Lexington, MA 02420.  Comments must be received on or before 5 pm Eastern time on July 6, 2020 to be considered.  All comments will be posted to the web site and the applicant will have an opportunity to respond.  Any response will also be posted.

April 22, 2015: Executive Director, Mike Sale, using authority delegated by the LIHI Governing Board, has determined that the Arkansas Dam No. 2 Hydroelectric project continues to meet the Low Impact Certification Criteria. The decision to certify the Arkansas Dam No. 2 Hydroelectric Project is for a 5-year term, effective January 19, 2015 and expiring January 19, 2020, with the following condition:

The 2015 reviewer’s report can be found in the files section below.

June 16, 2014: The Low Impact Hydropower Institute has received an application for a second term of certification of the Arkansas River Dam No. 2 Hydroelectric Project. A public comment period will be open for 60 days, ending on August 1, 2014.

January 19, 2010: Arkansas Electric Cooperative Corporation has submitted an application for certification of the Arkansas River Dam No. 2 Project. A public comment period will remain open for 60 days.