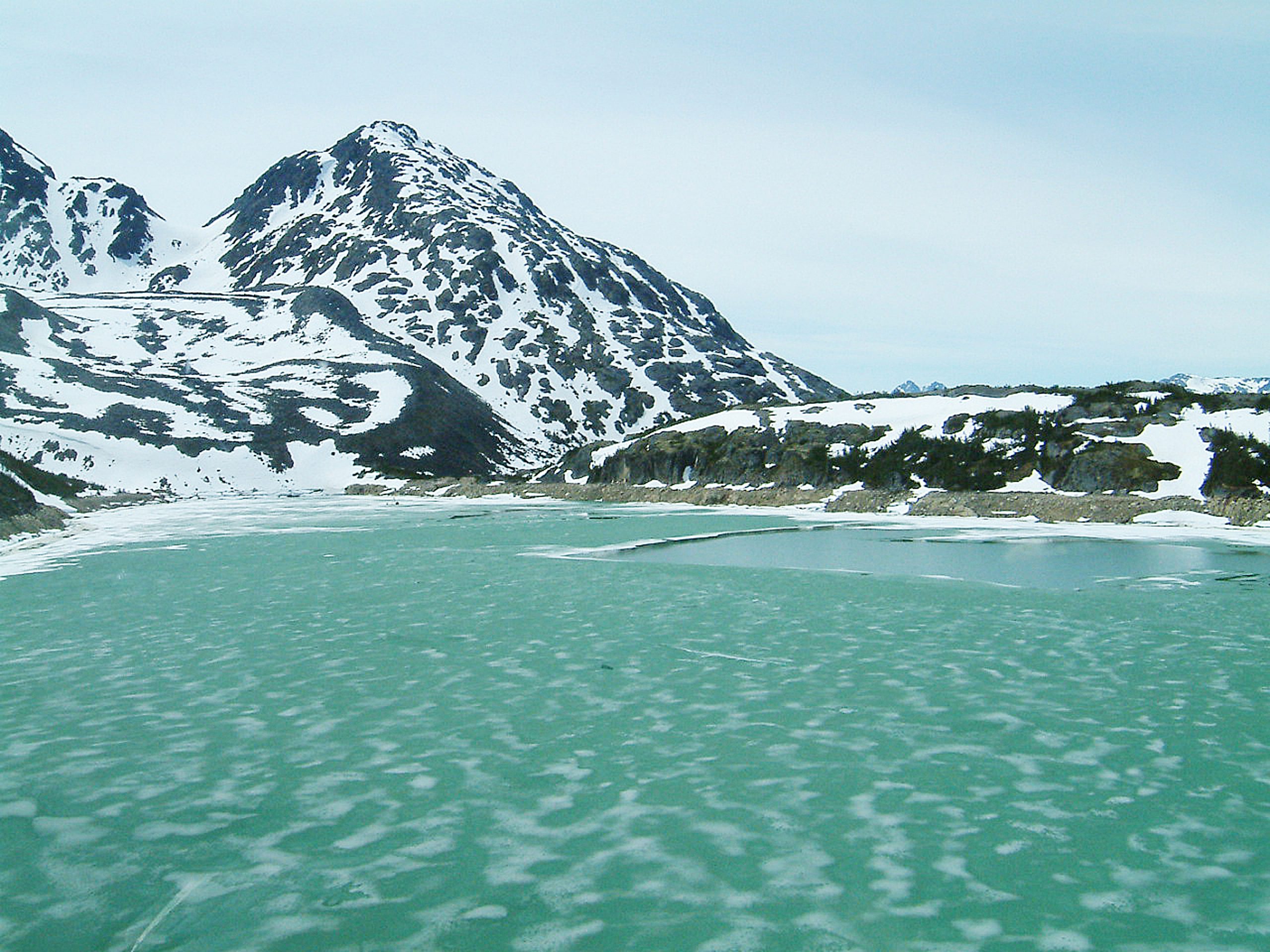 The Goat Lake Hydroelectric Project is located northeast of Skagway, Alaska. The lake is situated in a perched cirque valley and the lake lies southeast of the Skagway River. The lake is fed by a glacier at its south end. The glacier terminates near the south end of the lake in a coarse rubble moraine, consisting principally of large angular granitic blocks. The lake outlet, located about 300 feet north of the end of the moraine, flows through a bedrock notch and contributes the major portion of the water flow in Pitchfork Falls Creek. After the falls this same water then joins the Skagway River. The lake is used as a natural reservoir without any dam. The project was licensed for operation in 1996 and was developed in 1997 and it occupies land in the Tongass National Forest.

The project includes the lake which continues to have an uncontrolled spillway using the original outlet. A siphon intake extends into the lake a horizontal distance of 369 feet to obtain 185 feet of submergence. The intake, consisting of a v-shaped wedgewire screen assembly, is connected to the siphon pump by a 30-inch-diameter high density polyethylene chloride (HDPE) penstock which changes to a 28-inch-diameter steel penstock approximately 82 feet before the siphon house. The siphon pump connects with a valve house via a 704-foot-long, 30-inch-diameter HDPE penstock. A catch-basin catches runoff from the glacier moraine that bypasses the lake. The catch-basin is connected to a pumpback house via an 18-inch-diameter HDPE penstock. The pumpback house draws water from the catch-basin and pumps the water back to the lake via a 16-inch-diameter, 640-foot-long HDPE penstock by using four pumps of various horsepower. The valve house also has a 16-inch bypass flow pipe for when additional water is needed in Pitchfork Falls Creek at certain times of the year. The valve house also has a 28-inch- diameter HDPE penstock to approximately the 2,610-foot elevation where the penstock transitions to a 24-inch-diameter steel pipe to the powerhouse. At the 990-foot elevation the penstock crosses under the historic White Pass & Yukon Route Railroad via an approximately 40-foot-long pipe conduit. At the 777-foot elevation the penstock passes through a 48-inch-diameter pipe conduit over the Skagway River, to the west bank and to the powerhouse, at 769-feet above msl.

The powerhouse contains one horizontal shaft Pelton turbine and associated synchronous generator for a total installed capacity of 4.0 MW. The tailrace transports the turbine discharge approximately 70 feet to the Skagway River. A small substation is located adjacent to the powerhouse. A pole mounted 34.5 kV transmission line begins at the substation and parallels the Skagway River, following the west side for approximately 4,538 feet to a point across from Clifton and ascends to the distribution line from Skagway serving the U.S. Customs Border Station on the Klondike Highway.

The project operates in a store-and-release mode and the 204-acre lake does not contain a dam. The project does not provide any bypass flows. Alaska Department of Environmental Conservation did not have any flow regime recommendations to protect aquatic biota as the waterbody lacks suitable habitat for native fish populations. A seasonal minimum Pitchfork Falls flow of 8.5 cfs is provided for aesthetic purposes from June 1 through September 30 for 12 hours each day.

Migratory species have not historically been present in the project area. A downstream barrier is present on the Skagway River that precludes access for migratory fish species. USFWS and the Alaska Department of Fish and Game (ADGF) concluded that the waters in the project area have limited to no value for the support of fish under natural flow conditions. ADFG began a grayling stocking program in 1994 in an attempt to establish a sport fishery in Goat Lake. The project conducted population and habitat surveys in order to determine project drawdown impacts on spawning access. Completed in 2007, the studies indicated that drawdowns did not have a significant impact. Due to the low nutrient content and temperature of the waterbody, the stocking effort was deemed unsuccessful by ADFG.

The project is located on lands owned by the United States Forest Service and the Alaska Department of Natural Resources. No lands of significant ecological value are under the purview of the project.

Cultural resources in the project vicinity include the Skagway Historic District, White Pass National Historic Landmark, Brackett Wagon Road, and a historic telegraph and telephone line dating from World War II. None of these resources are located in the project area and no impacts are expected due to project operations.

The project does not provide any recreational resources and has been left intentionally undeveloped by the United States Forest Service to retain its roadless and wildland character. Non-project recreation is available nearby.

January 5, 2022: The Low Impact Hydropower Institute has issued a final decision on the recertification of the Goat Lake Project.  The 30-day appeal window closed on December 30, 2021 and no appeals were filed.  Therefore, the decision to recertify the project is now final.  The new term is October 23, 2021 through October 22, 2031, reflecting the extended terms for Certificates that became effective on January 1, 2022.

This decision is preliminary pending the 30-day appeal window. Only those who commented on the initial application during the 60-day comment period are eligible to file an appeal. Such appeal needs to include an explanation as to how the Project does not meet the LIHI criteria. Appeal requests can be submitted by email to comments@lowimpacthydro.org with “Goat Lake Project” in the subject line, or by mail addressed to the Low Impact Hydropower Institute, 1167 Massachusetts Ave, Office 407, Arlington, MA 02476. All requests will be posted to the website. The applicant will have an opportunity to respond and any response will also be posted. Requests must be received by 5 pm Eastern time on December 30, 2021. The full application and reviewer’s report are available below.

If no appeal requests are received and the decision becomes final, the Certification term for the Project will be October 23, 2021 through October 22, 2026.

LIHI is seeking comment on this application. Comments that are directly tied to specific LIHI criteria (flows, water quality, fish passage, etc.) will be most helpful, but all comments will be considered. Comments may be submitted to LIHI by e-mail at comments@lowimpacthydro.org with “Goat Lake Project Comments” in the subject line, or by mail addressed to the Low Impact Hydropower Institute, 1167 Massachusetts Avenue, Office 407, Arlington, MA 02476. Comments must be received at the Institute on or before 5 pm Eastern time on November 28, 2021 to be considered. All comments will be posted to the web site and the applicant will have an opportunity to respond. Any response will also be posted.

The complete application can be found below.

Any Commenter may submit a letter to the Executive Director requesting an appeal within the 30-day period.  The appeal request must state specific reasons why the hydropower facility should have failed one or more criteria.  Only individuals or organizations that commented on the initial Application Package may file an appeal.  Further information about the LIHI appeal process is available in the LIHI Handbook, available at https://lowimpacthydro.org/certification-program-html/.  If no appeal is requested within the 30-day period, which begins on February 10 and ends on March 10, the Executive Director will issue final LIHI Certification for the facility and post a notification of certification on the Institute’s website.

December 16, 2016: The Goat Lake certificate has been granted an additional extension of the current certificate term. The new expiration date is March 31, 2017. See the extension letter for explanation below.

September 12, 2016:  The Goat Lake certificate has been granted an extension of the current certificate term. The new expiration date is December 31, 2016. See the extension letter for explanation below.

August 5, 2016: On July 11, 2016, the Low Impact Hydropower Institute received a complete application for a new term of Low Impact Certification for the Goat Lake Hydroelectric project.  The application materials can be found in the Files section below.

LIHI is seeking public comment on this application.  Specifically, we are interested in knowing whether you think the Goat Lake project continues to meet the LIHI Low Impact Certification Criteria.  Please review the program and criteria in LIHI’s revised Handbook and then review the Project’s 2016 application materials posted on the project page.  Comments that are directly tied to specific LIHI criteria (flows, water quality, fish passage, etc.) will be most helpful, but all comments will be considered.  Comments may be submitted to the Institute by e-mail at comments@lowimpacthydro.org with “Goat Lake Project Comments” in the subject line, or by mail addressed to the Low Impact Hydropower Institute, PO Box 194, Harrington Park, New Jersey 07640.  Comments must be received at the Institute on or before 5 pm Eastern time on October 5, 2016 to be considered.  All comments will be posted to the web site and the applicant will have an opportunity to respond.  Any response will also be posted.

February 15, 2012: Alaska Power and Telephone has submitted an application for recertification of the Goat Lake Project. The original LIHI certification expired on October 23, 2011.

October 23, 2006: Alaska Power and Telephone has submitted an application for certification of the Goat Lake Hydroelectric Project.