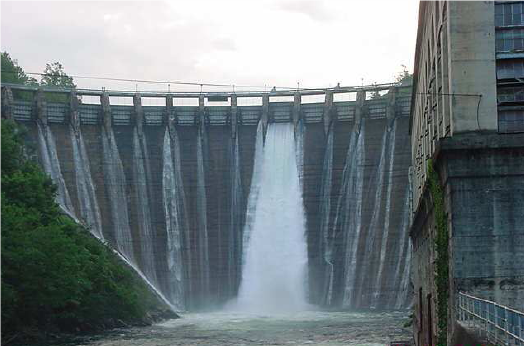 The Santeetlah development operates as a store-and-release facility. Impoundment fluctuations are limited to 5 feet from April 1 to November 1, and up to 9.9 feet from December 1 to March 1. This flow regime was prescribed via the project’s relicensing Settlement Agreement which was developed in consultation with state and federal agencies, the Eastern Band of the Cherokee Indians (EBCI), local governments, homeowner associations, and local/national NGOs. The regime was designed for protection and enhancement of water resources including aquatic habitat, water quality, and wetlands in the reservoir area as well as the downstream reaches of the river. The development provides a minimum flow into the 9.3-mile-long bypassed reach based on average daily inflow of the three preceding months – typically ranging between 40 and 100 cfs depending on the historic average monthly flow.

Waters within the project reaches are designated as Class B in the Santeetlah reservoir and Class C in the Cheoah development reaches with no impaired waters either project areas. The Calderwood reservoir waters are designated as Class C and the Chilhowee reservoir is supportive of fish and aquatic life, recreation, irrigation, and wildlife. The Little Tennessee River is listed as an impaired waterway for PCB contamination downstream of the Smoky Mountain Project though the Tennessee Department of Environment and Conservation has noted that the project is not responsible for this listing.

US Fish and Wildlife Service (USFWS) has prescribed a fish passage translocation plan for the Chilhowee development. This management plan provides funding to USFWS to trap and relocate several native fish species to be reintroduce them to the waters above the Chilhowee Dam. The number of each species to be relocated each year is decided at an annual meeting of the project owner and USFWS. The target species include spotfin chub, yellowfin madtom, smoky madtom, and duskytail darter. The Chilhowee development also operates under a tailwater fish monitoring plan to evaluate the presence of migratory fish species including lake sturgeon, black buffalo, smallmouth buffalo, river redhorse, sauger, and American eel. Currently, USFWS has not requested that further fish passage facilities be installed at the development.

The project lands consist of roughly 2,500 acres. The areas surrounding the project developments are primarily undeveloped and protected to remain that way for the benefit of fish and wildlife and their habitat. The project owner contributes to two separate mitigation funds, the North Carolina Resource Management and Enhancement Fund (NC Fund) and the Tallassee Fund. The NC Fund is used to monitor biotic and abiotic parameters of the watershed, endangered species recovery efforts, invasive species control, education efforts, and the addition of woody debris, gravel, and vegetation with the Cheoah River. These funds are used by the state and federal resource agencies and the EBCI. The Tallassee Fund is used for endangered species recovery efforts, ecosystem enhancements and restoration, invasive species management, and education and outreach efforts.

PLUS-Standard: The project owner provides annual enhancement funding of over $100,000 and has purchased 11,000 acres of non-project lands for conservation via easements.

Each of the four developments at the project house several historic resources. The Santeetlah dam, pipeline and tunnels, powerhouse, and ancillary buildings are all listed on the National Register of Historic Places (NRHP). The Cheoah dam, penstock building, powerhouse, and ancillary buildings are also listed on the NRHP. The Calderwood dam, penstock, tunnel, powerhouse, service building, school, theater, and ancillary buildings have been added to the NRHP. An abandoned worker’s camp, prehistoric lithic scatter, and tunnel and railroad were also identified in the development area. The Chilhowee dam and powerhouse are listed on the NRHP. These historic properties are preserved under the project’s historic properties management plan. The plan was developed in consultation with the North Carolina State Historic Preservation Office (SHPO), the Tennessee SHPO, US Forest Service, Great Smoky Mountains National Park, EBCI Tribal Historic Preservation Office, and FERC. Annual reports on the condition and activities surrounding the historic properties are submitted for review by FERC, federal agencies, the SHPOs, EBCI Tribal Historic Preservation Office, the United Keetowah Band of Cherokee Indians (UKB) and the Cherokee Nation of Oklahoma.

Recreational resources at the project include:

Public access is provided free of charge and the project consults annually with US Forest Service, and state agencies to prioritize recreational enhancements for the following year. 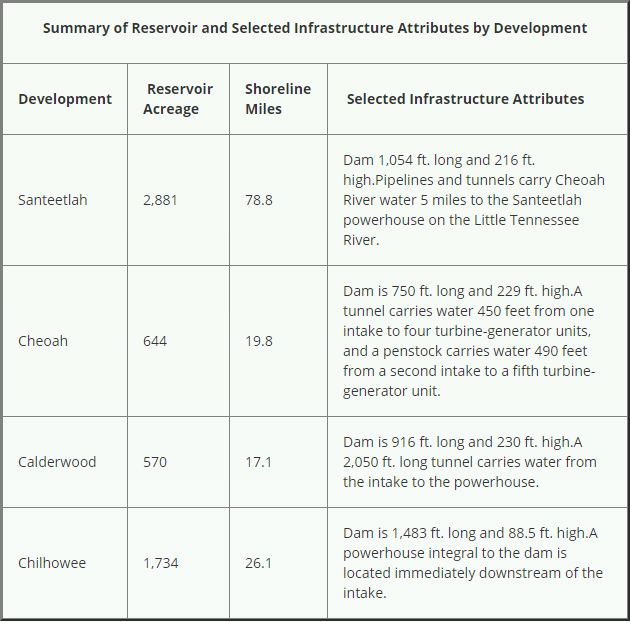 2022: No material changes or compliance issues were identified. The project remains in compliance based on the annual review. The project reported on a native pollinator habitat restoration project (native plant seeding) at Calderwood conducted in ccollaboration with USFWS and the Eastern Band of Cherokee Indians

2021: The project reported no change in status of Condition 1, and reported consultation with and approval by agencies for recreation site closures and high flow events in 2020 and 2021 due to Covid. The project remains in compliance based on the annual review.

September 17, 2020: The Low Impact Hydropower Institute (LIHI) has preliminarily approved the Smoky Mountain Project for a new 8-year term of Low Impact Certification. The Project is located on the Cheoah and Little Tennessee Rivers in North Carolina and Tennessee.

This decision is preliminary pending the 30-day appeal window. Only those who commented on the initial application during the 60-day comment period are eligible to file an appeal. Such appeal needs to include an explanation as to how the Project does not meet the LIHI criteria. Appeal requests can be submitted by email to comments@lowimpacthydro.org with “Smoky Mountain Project” in the subject line, or by mail addressed to the Low Impact Hydropower Institute, 329 Massachusetts Ave, Suite 6, Lexington, MA 02420. All requests will be posted to the website. The applicant will have an opportunity to respond and any response will also be posted. Requests must be received by 5 pm Eastern time on October 17, 2020. The full application and reviewer’s report are available below.

If no appeal requests are received and the decision becomes final, the Certification term for the Project will be March 20, 2020 through March 19, 2028.

LIHI is seeking public comment on this application. Comments that are directly tied to specific LIHI criteria (flows, water quality, fish passage, etc.) will be most helpful, but all comments will be considered.  Comments may be submitted to the Institute by e-mail at comments@lowimpacthydro.org with “Smoky Mountain Project Comments” in the subject line, or by mail addressed to the Low Impact Hydropower Institute, 329 Massachusetts Avenue, Suite 6, Lexington, MA 02420.  Comments must be received on or before 5 pm Eastern time on July 26, 2020 to be considered.  All comments will be posted to the web site and the applicant will have an opportunity to respond.  Any response will also be posted.

July 26, 2012: The Tapoco Hydroelectric Project continues to meet the Low Impact Hydropower Certification Criteria, and has been recertified for an eight year term, effective March 20, 2012 and expiring March 20, 2020.

March 20, 2012: Alcoa Power Generating Inc. has submitted an application for the re-certification of the Tapoco Hydroelectric Project. A public comment period will remain open until May 20, 2012.

December 1, 2005: The Tapoco Hydroelectric Project has been certified as low impact for an eight year term, effective July 25, 2005 and expiring July 25, 2013. It consists of four powerhouses and four dams and is the largest hydropower project to be certified by LIHI on the east coast.

July 25, 2005: Alcoa Power Generating Inc. has submitted an application for certification of the Tapoco Hydroelectric Project, located on the Little Tennessee and Cheoah Rivers.