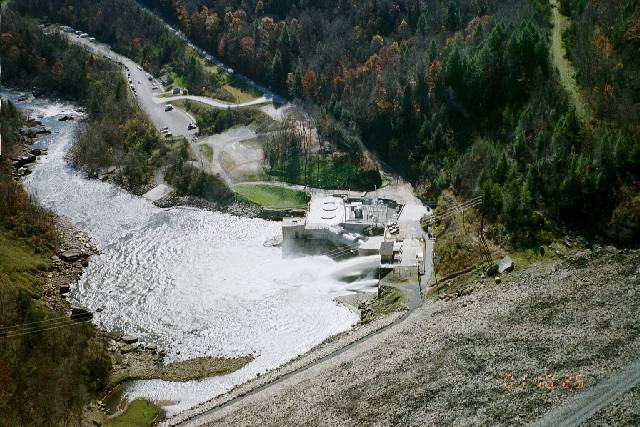 The Summersville dam is operated by the USACE which controls the amount and rate of water released through the dam. Operations of the project are coordinated on an hourly basis with USACE. Water is drawn out of the reservoir through an intake structure that leads to a 29-foot-diameter outlet tunnel. The hydro project aerates the water in its controlled release to the Gauley River. A 17-foot-diameter steel penstock conveys water to the powerhouse located downstream of the dam on the right riverbank. The powerhouse contains two Francis turbines with a combined capacity of 80 MW.
The project operates in a run-of-release mode based on USACE releases from the dam. A minimum flow of 100 cfs is discharged from the reservoir at all times. This flow increases based on reservoir filling periods. This flow regime was developed in consultation with West Virginia Department of Environmental Protection and the USACE.

Waters within the project reach are designated High Quality as a National Resource Water. The river in the project area is listed as impaired for pH and mercury. The cause of this impairment is likely due to acid deposition and not due to project operations. The project owner monitors dissolved oxygen (DO) in water releases and enhances DO in discharges to ensure preservation of water quality. DO monitoring reports are submitted to WV Department of Environmental Protection.

Historically, there have been no records of anadromous fish species in the project area. The Gauley River is within the historic range of the catadromous American eel, but passage was blocked in the early 1900s by the construction of several navigation dams on the Mississippi and Ohio Rivers. The West Virginia Department of Natural Resources (WVDNR) has created a diverse fishery in Summersville Lake via stocking efforts. While the population size is small, the fishery supports both warm water and cool water species including largemouth and smallmouth bass, channel catfish, flathead catfish, black crappie, walleye, rainbow trout, bluegill, and yellow perch. The reach downstream of the dam supports a year-round cold-water fishery for trout and walleye, established via WVDNR stocking efforts.

The project lands consist of less than two acres. The only lands owned by the project house the powerhouse, the rest of the area is owned and managed by USACE or WVDNR. The area is characterized by sharp ridges, narrow divides, and V-shaped valleys with nearly vertical cliffs. The streambed is comprised of rapids, cataracts, and large boulders.

Threatened or endangered species potentially present in the project vicinity include the Virginia spiraea, Indiana bat, Virginia big-eared bat, Northern long-eared bat, candy darter, and five species of freshwater mussels. The project owner consulted with US Fish and Wildlife Service to ensure protection of the federally listed Virginia spiraea when installing the transmission line corridor. An avoidance plan was developed which ensured that construction activities would circumvent any populations of the plant species. Project operations do not impact any of the listed species due to USACE control of the surrounding landscape.

The Summersville Dam, built in 1966, is eligible for listing on the National Register of Historic Places. No other cultural or historic resources are found in the project area or surrounding lands owned by USACE. The West Virginia Division of Culture and History (WVDCH) was consulted to assess any impacts on historic resources when the transmission corridor was constructed. The agency confirmed the construction of the corridor would have no impact on any resources. The project owner must consult with WVDCH prior to any land clearing or land disturbing activities to ensure protection of any potential unidentified resources.

2022: No material changes or compliance issues were identified. The project remains in compliance based on the annual review. The project reported that WVDEP issued a new NPDES discharge permit for non-contact cooling water which removed the hard temperature limits since Summersville Lake temperatures were often higher than prior permit limits, and instead requires continuous monitoring of water temperature allowing the project to operate within the conditions of the permit

September 25, 2020: The decision to recertify the Summersville Project became final after the close of the appeals period on September 19, 2020 with no appeals filed. The Certification term is from November 10, 2019 – November 9, 2024.

August 20, 2020: The Low Impact Hydropower Institute (LIHI) has preliminarily approved the Summersville Project (LIHI #17) for a new 5-year term of Low Impact Certification. There are no conditions on the Certificate.

This decision is preliminary pending the 30-day appeal window. Only those who commented on the initial application during the 60-day comment period are eligible to file an appeal. Such appeal needs to include an explanation as to how the Project does not meet the LIHI criteria. Appeal requests can be submitted by email to comments@lowimpacthydro.org with “Summersville Project” in the subject line, or by mail addressed to the Low Impact Hydropower Institute, 329 Massachusetts Ave, Suite 6, Lexington, MA 02420. All requests will be posted to the website. The applicant will have an opportunity to respond and any response will also be posted. Requests must be received by 5 pm Eastern time on September 19, 2020. The full application and reviewer’s report are available below.

If no appeal requests are received and the decision becomes final, the Certification term for the Project will be November 10, 2019 through November 9, 2024.

LIHI is seeking public comment on this application. Comments that are directly tied to specific LIHI criteria (flows, water quality, fish passage, etc.) will be most helpful, but all comments will be considered.  Comments may be submitted to the Institute by e-mail at comments@lowimpacthydro.org with “Summersville Project Comments” in the subject line, or by mail addressed to the Low Impact Hydropower Institute, 329 Massachusetts Avenue, Suite 6, Lexington, MA 02420.  Comments must be received on or before 5 pm Eastern time on July 6, 2020 to be considered.  All comments will be posted to the web site and the applicant will have an opportunity to respond.  Any response will also be posted.

April 17, 2015: Executive Director, Mike Sale, using authority delegated by the LIHI Governing Board, has determined that the Summersville Project continues to meet the Low Impact Certification Critieria.  The decision to certify the Summersville Hydroelectric Project is for a 5-year term, effective November 10, 2014 and expiring November 10, 2019, with the following conditions:

January 5, 2015:  The Low Impact Hydropower Institute received a complete and timely application for a new term of Low Impact Certification for the Summersville project on September 18, 2014.  Please see the application files below.

November 10, 2014:  The Certification term for the Summersville project has been extended through March 31, 2015 to allow for internal administrative delays in processing the Project application for an additional term.  The application will be posted shortly.

November 25, 2009: Gauley River Power Partners, Inc. has submitted an application for recertification of the Summersville Hydroelectric Project.  Comments must be received by January 25, 2010.

April 28, 2005: The Summersville Hydroelectric Project has been certified as low impact for a five year term, effective November 10, 2004 and expiring November 10, 2009.

November 10, 2004: Gauley River Partners, Inc. has submitted an application for certification of the Summersville Hydroelectric Project, located on the Gauley River in Nicholas County, West Virginia.