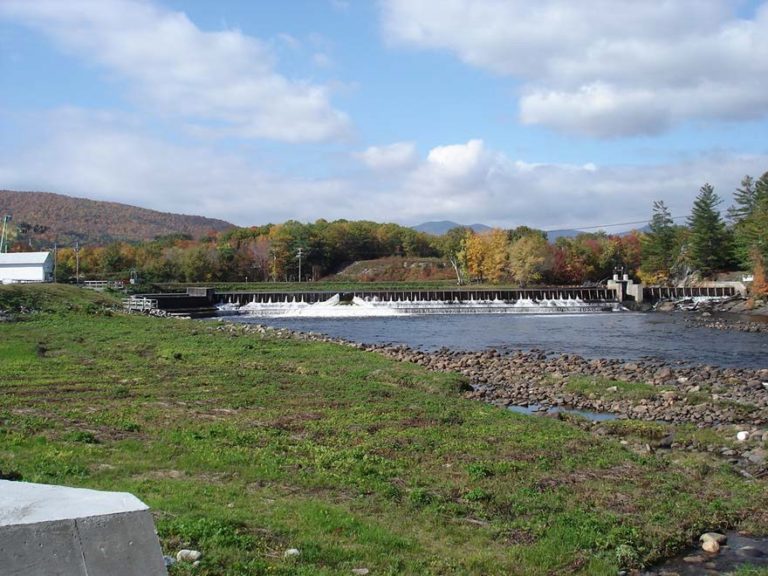 The Gorham Hydroelectric Project is located on the Androscoggin River in northern New Hampshire in Coos County, in the town of Gorham. The Project is one of seven hydroelectric projects within an 11-mile reach of the Androscoggin River between Berlin and Shelburne, New Hampshire. There are five hydroelectric projects within 8 river miles of the Gorham Project: the Shelburne Project (LIHI #176) is approximately 3 river miles downstream and the Upper Gorham (LIHI #175), Cross Power (LIHI #174), and Sawmill (LIHI #173) projects, among others, are located just upstream.

The project dam, water control structures, and powerhouse were built in stages, beginning in 1903 and completed in 1923. Twin State Gas and Electric originally owned the project and Public Service of New Hampshire acquired it in 1943. The project was bought by the current owner in 2018.
The project includes a dam, power canal, powerhouse, and four vertical axis turbines.

The dam is a timber crib, L-shaped dam, 417 feet long and about 20 feet high, with three sections, each topped with flashboards of varying heights. An earthen power canal conveys water from the impoundment to the powerhouse and is approximately 415 feet long by 60 feet wide and 20 feet deep. The powerhouse contains two Francis-type turbines, and two vertical, propeller-type turbines with a total installed capacity of 2.15 MW.
The project operates as a run-of-river facility and impounds a 32-acre reservoir with no impoundment fluctuations. A continuous minimum flow of 200 cfs is provided in the bypassed reach. This minimum flow regime is based on results from an Instream Flow Study conducted in 1993 which found that the minimum flow would provide suitable protection of resident aquatic species and their habitat. This regime and associated monitoring efforts were developed in consultation with the US Geological Survey, USFWS, and the New Hampshire Fish and Game Department.

Waters within the project reach are designated as Class B, managed for aquatic biota protection and primary contact recreation. The river reach is also impaired for mercury presence, low dissolved oxygen, and pH levels. The mercury contamination comes from a legacy of former paper mill contamination. Studies beginning in 2020 as part of FERC relicensing are designed to determine if the project has any adverse impact on dissolved oxygen and pH levels in the river, which is unlikely given the minimum flow and run-of-river operation.

The Androscoggin River is not accessible to diadromous fish species in the project reach. Species such as alewife, blueback herring, striped bass, sea lamprey, and American shad are not present in the area due to downstream natural falls – Lewiston and Rumford Falls. American eel are present in the lower reaches of the Androscoggin River though none have historically reached the upper sections of the river. Downstream fish passage is adequately provided through spillage. New studies are being conducted fort relicensing to determine operational impacts, if any, of the project on aquatic resources.

The project lands consist of roughly 29 acres. Surrounding lands include a mix of wooded wetlands, emergent herbaceous wetland, and forest. The Town of Gorham abuts the south shoreline and is primarily developed with sections of deciduous forest. A 150-foot woodland buffer from the high-water mark is maintained to protect the shoreline and a further 250-foot buffer is designated as protected shoreland with restricted uses.

Threatened or endangered species potentially present in the project vicinity include the: Canada lynx, Northern Long-eared bat, Eastern small-footed bat, little brown bat, and tri-colored bat. The project is outside of critical habitat for the Canada lynx. Tree clearing activities have the greatest potential to harm bat populations, but no tree clearing occurs as a part of routine maintenance. The woodland buffer maintained by the project are set back from the project and could provide habitat for the listed bat species.

Historic properties in the project reach include the Eddy Bridge site comprised of abutments for a suspension bridge built in 1877 and the Logging Boom site containing logging cribs and boom. Both sites are continuously inundated. The project operates under a Cultural Resources Management Plan which includes provisions for management strategies, action plans, and consultation procedures to protect existing resources and any resources discovered in the future.

Recreational resources at the project include a walking trail, picnic area, canoe portage, a fishing area downstream, and an information kiosk. Public access is provided free of charge.

2022: No material changes or compliance issues were identified. The project remains in compliance based on the annual review. For Condition 1, NHDES has not provided approval of study results. The project’s relicensing initial study report was filed June 6, 2021 with the recreation study postponed to 2022. Note that the project is on the same relicensing schedule as other projects on the Androscoggin River in NH including those that are LIHI Certified.

2021: The project reported that water quality monitoring was completed in 2020 during the first study year of FERC relicensing. The project remains in compliance based on the annual review.

2020: The project reported no water quality studies were conducted in 2019. The project remains in compliance based on the annual review.

July 23, 2019: The decision to certify the Gorham Hydroelectric Project is final. No appeals were received during the appeal period which closed on July 18, 2019. The new certification term for the Project is from March 29, 2019 through March 28, 2024.

This decision is preliminary pending the 30-day appeal window. Only those who commented on the initial application during the 60-day comment period are eligible to file an appeal. Such appeal needs to include an explanation as to how the Project does not meet the LIHI criteria. Appeal requests can be submitted by email to comments@lowimpacthydro.org with “Gorham Hydroelectric Project” in the subject line, or by mail addressed to the Low Impact Hydropower Institute, 329 Massachusetts Ave, Suite 6, Lexington, MA 02420. All requests will be posted to the website.  The applicant will have an opportunity to respond and any response will also be posted. Requests must be received by 5 pm Eastern time on July 18, 2019.  The full application and reviewers report are available below.

If no appeal requests are received and the decision becomes final, the Certification term for the Project will be March 29, 2019 for a five (5) year term which will expire on March 28, 2024.

April 2, 2019: The Low Impact Hydropower Institute has received a complete application for Low Impact Certification of the Gorham Hydroelectric Project.  LIHI is seeking public comment on this application.  Specifically, we are interested in knowing whether you think the Project meets the LIHI Low Impact Certification Criteria, as revised in the 2nd Edition Handbook.  Please review the program and criteria in LIHI’s revised Handbook and then review the Project’s application materials below.

Comments that are directly tied to specific LIHI criteria (flows, water quality, fish passage, etc.) will be most helpful, but all comments will be considered.  Comments may be submitted to the Institute by e-mail at comments@lowimpacthydro.org with “Gorham Project Comments” in the subject line, or by mail addressed to the Low Impact Hydropower Institute, 329 Massachusetts Avenue, Suite 6, Lexington, MA 02420.  Comments must be received on or before 5 pm Eastern time on June 1, 2019 to be considered.  All comments will be posted to the web site and the applicant will have an opportunity to respond.  Any response will also be posted.