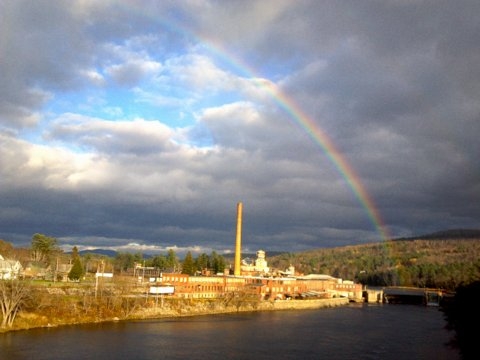 The Gilman Project is located in the Village of Gilman, VT in the Town of Lunenburg, Essex County, Vermont, and in the Town of Dalton, Coos County, New Hampshire, on the Connecticut River. The boundary between Vermont and New Hampshire passes through the project such that two generating units are located in New Hampshire, while the other two generating units are located in Vermont. In 1995 and 1996 the Simpson Paper Company, who owned and operated the site to produce paper until 1999, spent millions to refurbish the dam by replacing the existing timber crib dam structure with a concrete gravity structure and adding rubber dam crest controls to the new and existing spillways. There are ten hydroelectric projects on the Connecticut River. The project is the ninth most upstream dam located between the Fifteen Miles Falls Project and the Canaan Project.

A power canal leads to an intake structure, and the powerhouse containing three Francis turbine generating units and one Kaplan unit with a combined capacity of 4.85 MW.

The powerhouse is located at the northern Vermont end of the dam on the right bank of the Connecticut River and was originally constructed as a ground wood mill. The powerhouse has a substructure of mass concrete with integral water intake draft tubes. The superstructure is of brick construction with steel-frame and timber-frame construction. Project controls and mechanical equipment are located inside the powerhouse.

The project operates in a run-of-river mode and impounds a 130-acre reservoir. A minimum flow of 210 cfs is provided from June 1 to October 15 whenever instantaneous inflow to the project is 1,000 cfs or less. This flow regime was developed based on United States Geologic Survey records with consultation from New Hampshire Department of Environmental Services (NHDES) and Vermont Agency of Natural Resources (VANR). The flow regime mitigates low dissolved oxygen levels in the downstream reach and helps maintain adequate fish habitat in the Connecticut River.

Waters within the project reach are designated as water-quality limited due to the potential for low dissolved oxygen levels. Water quality monitoring confirmed that the project meets water quality standards.

Downstream dams create a barrier to upstream fish passage. The two dams closest downstream of the project do not have upstream passage requirements and resource agencies have not prescribed passage. In 2007, the project owner began consultation with United States Fish and Wildlife Service (USFWS) and Vermont Department of Fish and Wildlife (VDFW) to implement downstream fish passage facilities at their request. Consultation on design occurred from 2009-2011 and the passage facility consisting of a passage slot leading to a plunge pool was implemented in 2012 to assist the Atlantic salmon restoration efforts on the Connecticut River. The restoration efforts were discontinued in 2016 and the downstream passage, though no longer required, is still operated for resident species.

The project lands consist of roughly 1.1 acres. No lands of significant ecological value exist in the project property due to its limited ownership of the shoreline. The north shoreline consists of a paper mill complex and the town of Gilman and the south shoreline is primarily wooded deciduous forest.

Threatened or endangered species potentially present in the project vicinity include the Dwarf wedgemussel, Canada lynx, tricolored bat, Northern long-eared bat, mountain avens, Robbins Cinquefoil, and Boott’s rattlesnake-root. The project owner, in consultation with USFWS, VDFW, and NH Fish and Game Department conducted studies in 2013 to develop a formal drawdown management plan to minimize the project’s effects on the Dwarf wedgemussel. The agencies confirmed that the project is not impacting these listed species.

There are no cultural or historic resources present on facility lands.

Recreational resources at the project include a canoe portage and boat launch. Public access is provided free of charge.

Condition satisfied in 2020. Condition 1: By December 31, 2018, the Owner shall provide LIHI with evidence of compliance with the water quality monitoring and with the other recommendations issued by NHDES in its letter dated April 13, 2018. When available, the Owner shall provide evidence of concurrence from NHDES that the Facility does not negatively impact water quality.

Condition partially satisfied in 2021, only annual reporting is now required. Condition 2: By July 31, 2018, the Owner shall submit the final Drawdown Management Plan to USFWS and LIHI.  When available, the Owner shall provide evidence of concurrence by the agencies on the plan.  In the annual compliance statements to LIHI, the Owner shall provide a summary of activities related to dwarf wedgemussel during the prior year including any takings, agency communication and consultation, issuance of an agency Biological Opinion, and/or changes in operations or facilities that may affect the species.

2021: There were no reported changes or compliance issues. The project remains in compliance based on the annual review. For Condition 2, the project provided agency concurrence on the drawdown plan, thus partially satisfying the condition.

May 15, 2018 – On May 14, 2018, the Gilman Hydroelectric project has received preliminary approval for a new 5-year term of Low Impact Certification. This decision is preliminary pending the 30-day appeal window. Only those who commented in the initial application 60-day comment period are eligible to file an appeal. Such appeal needs to include an explanation as to how the project does not meet the LIHI criteria. Appeal requests can be submitted by email to comments@lowimpacthydro.org with “Gilman Hydroelectric Project” in the subject line, or by mail addressed to the Low Impact Hydropower Institute, 329 Massachusetts Ave, Suite 2, Lexington, MA 02420. All requests will be posted to the website and the applicant will have an opportunity to respond and any response will also be posted. Requests must be received by 5 pm Eastern time on June 14, 2018.  The full application and reviewers report are available below. If no appeal requests are received and the decision becomes final, the new term for the Rolfe Canal Project will be September 6, 2017 through September 5, 2022.

February 20, 2018: The Low Impact Hydropower Institute has received a complete application for a new term of Low Impact Certification for the Gilman Hydroelectric Project. LIHI is seeking public comment on this application.  Specifically, we are interested in knowing whether you think the Gilman Project meets the LIHI Low Impact Certification Criteria, as revised in the 2nd Edition Handbook.  Please review the program and criteria in LIHI’s revised Handbook and then review the Project’s 2018 application materials posted below. Comments that are directly tied to specific LIHI criteria (flows, water quality, fish passage, etc.) will be most helpful, but all comments will be considered.  Comments may be submitted to the Institute by e-mail at comments@lowimpacthydro.org with “Gilman Comments” in the subject line, or by mail addressed to the Low Impact Hydropower Institute, 329 Massachusetts Avenue, Suite 2, Lexington, MA 02420.  Comments must be received at the Institute on or before 5 pm Eastern time on April 21, 2018 to be considered.  All comments will be posted to the web site and the applicant will have an opportunity to respond.  Any response will also be posted.

October 12, 2017: The Gilman Hydroelectric Project certification term has been extended to March 31, 2018.

February 4, 2013: The public comment period on application has closed.

December 4, 2012: Ampersand Gilman Hydro LP has submitted an application for the certification of its Gilman Hydroelectric Project. The application was posted to the website and the public comment period was opened.