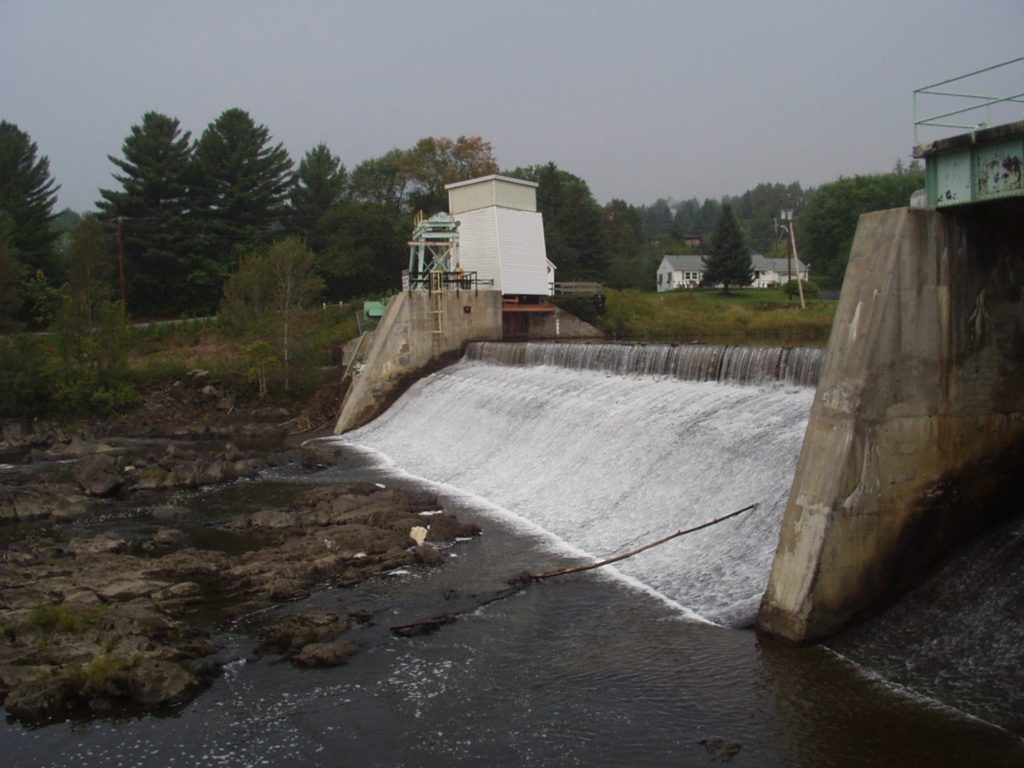 The Canaan Project is located on the upper Connecticut River in the towns of Canaan, VT, and Stewartstown, (West Stewartstown Village) NH. It is situated at river mile 370, 10 miles below Murphy Dam at Lake Francis and 82 miles above Moore Dam (part of LIHI #39). The project is one of thirteen dams on the mainstem of the Connecticut River which provide flood control and hydropower. The project dam was originally constructed in 1927 as a non-powered dam. The dam was reconstructed and upgraded in 1943, adding hydropower facilities to the project. The Project is owned and operated by Central Rivers Power NH, LLC.

The concrete gravity dam is approximately 275 feet long and 18 feet tall, located on the Connecticut River in Stewartstown, NH. A concrete section is located at the south abutment and is 56 feet wide with stoplogs supported by steel stanchions. The main spillway is a concrete gravity, ogee-shaped section approximately 150 feet long and equipped with 3.5 feet high pipe-supported flashboards. A waste gate is located to the right of the main spillway. It consists of a 20-foot-wide concrete sluiceway equipped with an electrically operated 15-foot high steel tainter gate. A steel penstock, 1,360 feet long with diameter of 9 feet, and two steel surge tanks, 15′ 4″ in diameter and 21′ 4″ in height, convey water to the powerhouse located about 200 feet downstream of the surge tanks. These facilities are all located in Canaan, Vermont. The powerhouse contains a single vertical Francis turbine. The bypassed reach is approximately 1,600 feet long and composed of ledge, cobble, and boulders.

The project operates in run-of-river mode and impounds a 20-acre reservoir. The project provides a 165 cfs minimum flow into the bypassed reach year-round. This flow regime was developed based on the results of an Instream Flow Study with approval from the Vermont Agency of Natural Resources (VANR), New Hampshire Department of Environmental Services, New Hampshire Fish and Game Department (NHFG), and USFWS.

Downstream dams preclude upstream access for migratory fish species on the Connecticut River. American eel, a catadromous species, is found in the lower reaches of the Connecticut River and may have been able historically to access the project area. The construction of downstream dams occurred prior to the installation of the project in 1927, blocking access to the project well before its inception. The project vicinity does support a very productive recreational fishery which includes rainbow trout, brown trout, brook trout, white sucker, and dwarf longnose sucker. Chain pickerel, yellow perch, smallmouth bass, largemouth bass, and rock bass are also present. Some of these populations are natural and some are stocked by NHFG. The minimum flow in the bypassed reach provides adequate flow to support aquatic habitat and downstream passage at the project.

The project lands consist of roughly 6 acres. Approximately 89% of the shoreline in the project boundary is undeveloped/undisturbed with industrial, commercial, and rural residential buildings in the vicinity of the project. The project operates under a riparian management plan, intended to maintain an undisturbed riparian zone along the river, impoundment, and bypassed reach. The project owner also conducts an invasive plant survey every four years. If any are identified, the owner collaborates with local resource agencies on eradication and control measures.

Threatened or endangered species potentially present in the project vicinity include the Northern Long-eared Bat, Canada Lynx, Satiny Willow, Pearlshell Mussel, Round Whitefish, Brook Trout, and Bald Eagle. While many of the above species have been noted in the project vicinity, there is a lack of suitable habitat in the project reach for these species based on review of locational information provided by the New Hampshire Natural Heritage Bureau. Project impacts are not believed to negatively affect these species.

An archaeological survey of the project reach was conducted in collaboration with the State Historic Preservation Office and the Alnobak Heritage Preservation Center. This study identified four historic period archaeological sites and five segments of the shoreline sensitive for prehistoric archaeological resources. The structural remains of the project’s predecessor, the Allen Electric Light Plant, were found along with a stone structure of unknown origin and the possible location of a 19th century building. The project provides annual reports to the State Historic Preservation Officer summarizing any activities that could impact these resources.

September 4, 2019: The decision to certify the Canaan Hydroelectric Project is final. No appeals were received during the appeal period which closed on September 1, 2019. The certification term for the Project is from May 2, 2019 through May 1, 2024. The Certificate includes one condition

This decision is preliminary pending the 30-day appeal window. Only those who commented on the initial application during the 60-day comment period are eligible to file an appeal. Such appeal needs to include an explanation as to how the Project does not meet the LIHI criteria. Appeal requests can be submitted by email to comments@lowimpacthydro.org with “Canaan Hydroelectric Project” in the subject line, or by mail addressed to the Low Impact Hydropower Institute, 329 Massachusetts Ave, Suite 6, Lexington, MA 02420. All requests will be posted to the website.  The applicant will have an opportunity to respond and any response will also be posted. Requests must be received by 5 pm Eastern time on September 1, 2019.  The full application and reviewer’s report are available below.

If no appeal requests are received and the decision becomes final, the Certification term for the Project (pending LIHI #160) will be May 2, 2019 for a term of five (5) years, which will expire on May 1, 2024.

May 3, 2019: The Low Impact Hydropower Institute has received a complete application for Low Impact Certification of the Canaan Hydroelectric Project.  LIHI is seeking public comment on this application.  Specifically, we are interested in knowing whether you think the Project meets the LIHI Low Impact Certification Criteria, as revised in the 2nd Edition Handbook.  Please review the program and criteria in LIHI’s revised Handbook and then review the Project’s application materials below.

Comments that are directly tied to specific LIHI criteria (flows, water quality, fish passage, etc.) will be most helpful, but all comments will be considered.  Comments may be submitted to the Institute by e-mail at comments@lowimpacthydro.org with “Canaan Project Comments” in the subject line, or by mail addressed to the Low Impact Hydropower Institute, 329 Massachusetts Avenue, Suite 6, Lexington, MA 02420.  Comments must be received on or before 5 pm Eastern time on July 2, 2019 to be considered.  All comments will be posted to the web site and the applicant will have an opportunity to respond.  Any response will also be posted.