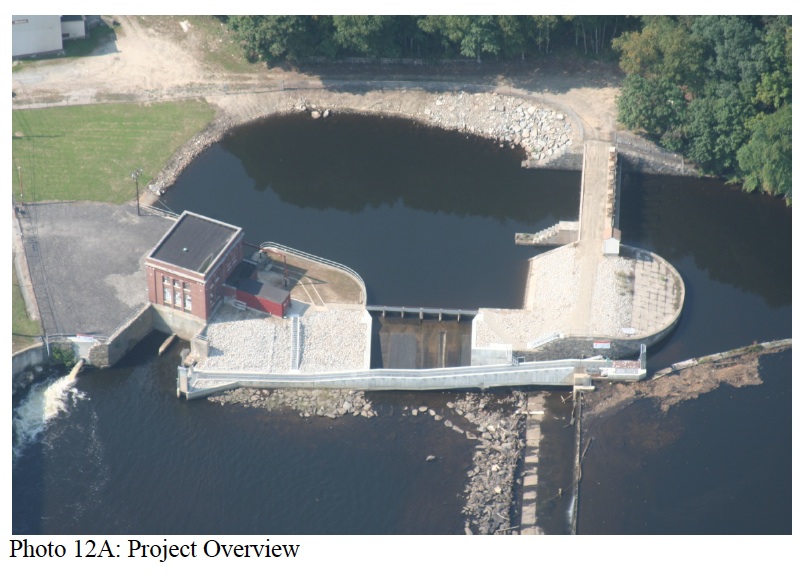 The Occum Project is located on the Shetucket River, a tributary to the Thames River, in the Village of Occum, City of Norwich and Village of Versailles, Town of Sprague, New London County, Connecticut. The project dam was constructed in 1865 to supply waterpower to mills and was then adapted for hydropower generation between 1934 and 1937. Norwich Public Utilities (NPU) purchased the project in 1932 and completed the installation of the project powerhouse and generating units in 1934 and 1937 respectively.

The project is operated primarily as a cycling facility and is dependent upon flows from the upstream Scotland Project (FERC No. 2662). The effect for the downstream Occum Project is an inflow which fluctuates in magnitude. Travel time for water between the Scotland and Occum projects is approximately two hours at higher flow levels. Downstream of the project are the Taftville Dam, an unlicensed hydroelectric facility, and the Greenville Project (LIHI #106), also owned by NPU.

The dam is comprised of two contiguous spillway sections with a total length of 450 feet, bordered on either side by an earth embankment. The east spillway section is a concrete ogee spillway, 170 feet in length. The west section is a stone masonry spillway 280 feet in length with 1.75-foot high wooden flashboards. The west section is equipped with a 4-foot-wide fish ladder and a downward opening 6-foot-wide trash gate. The upstream fish ladder parallels the forebay and extends from the dam to the powerhouse tailrace. The intake structure is approximately 85 feet in length and extends from the earth embankment that abuts the western side of the spillway to the west headgate wall. The intake gate structure controls the river flow into the forebay with 6 manually-operated motorized rack and pinion gates. The forebay measures approximately 225 feet long by 160 feet wide. A forebay spillway is topped with 1.7-foot flashboards that raise the pool elevation to the normal water surface elevation. This spillway, bordered by the earth embankment to the north and the powerhouse to the south, is approximately 30 feet wide and extends 50 feet along the east side of the forebay. The powerhouse contains one vertical Kaplan turbine-generator unit with an installed capacity of 0.8 MW.

The project operates in a limited store-and-release mode and impounds a 90-acre reservoir. During non-operational periods, the project provides a 100 cfs or inflow, whichever is less, in order to support the downstream reaches of the river. The upstream Scotland Project is currently undertaking an operational change to implement run-of-river operations. Upon successful implementation, the project plans on operating in run-of-river mode. This flow regime was developed in consultation with resource agencies including the Connecticut Department of Energy and Environmental Protection (CTDEEP).

Waters within the project reach are designated as Class B, managed for recreational uses, fish/wildlife habitat, and agricultural and industrial supply. No impaired waters are found in the project area and the CTDEEP has not expressed any concern with water quality impacts from the project.

The Shetucket River is host to several migratory fish species as well as several resident river species. These include American shad, river herring, gizzard shad, hickory shad, striped bass, bluegills, rainbow smelt, and American eel. In 2004, the project completed upstream eel passage in consultation with CTDEEP. While initial testing of the Denil ladder facility found the passage measure to be effective, the project faced operational challenges due to downstream dams. Thus, the project voluntarily replaced the ladder with an eel lift in collaboration with CTDEEP. The downstream fish passage facility is located immediately adjacent to the powerhouse and intake structure. The facility consists of a 5-foot-wide by 20-foot-long concrete collection chamber, a 5-footowide by 7-foot-high dual leaf downward opening flow control gate and a 26-inch diameter high density polyethylene buried pipe exiting the existing tailrace wall. Water into the passage is controlled through the use of the electrically-operated steel control gate set at appropriate heights to limit the amount of water entering the fishway. In 2018, USFWS concurred with CTDEEP’s position on the effectiveness of the fishery management at the project.

The project lands consist of roughly one acre. The surrounding lands are primarily low rolling hills with some steeper topography downstream of the project. Hardwood forest predominates the shoreline along the steep banks and upland areas. No erosion issues have been identified and due to the small project footprint, there are no lands of significant ecological value in the project area.

Threatened or endangered species potentially present in the project vicinity include the Northern Long-eared bat, bald eagle, and blueback herring. Via consultation with the Connecticut Bureau of Natural Resources, it was concluded that no critical habitats for listed species exist in the project area. Fish passage facilities minimize project impacts on blueback herring and no project impacts are expected for bald eagles that may visit the project. USFWS and CTDEEP have confirmed that the project does not adversely impact these species due to the lack of natural habitat and effective fish passage measures.

The project infrastructure, originally built in the mid-1800s, represents a period of mill development, and the modifications in the 1900s are characteristic of hydropower development in the 20th century. These cultural resources are protected under the project’s cultural resource management plan and the project owner consults with the State Historic Preservation Office annually to provide updates on any activities that may affect the resources at the project.

Recreational resources at the project include a canoe portage which was developed and installed in consultation with local resource agencies. Additionally, an Americans with Disabilities Act compliant portage ramp is maintained by the project. Access to the powerhouse and dam area is prohibited for public safety reasons. Public access is provided free of charge.

2022: No material changes or compliance issues were identified. The project remains in compliance based on the annual review. For Condition 1, the project reported CTDEEP’s continued suspension of the fish passage study pending improvements in passage at a downstream dam.

2021: There were no reported changes or compliance issues. The project remains in compliance based on the annual review. For Condition 1, the project reported CTDEEP’s suspension of the 2020 passage study pending improvements in passage at a downstream dam.

2020: There were no reported changes or compliance issues. The project remains in compliance based on the annual review. For Condition 1, the project reported fishway operations in accordance with CTDEEP recommendations.

2019: There were no reported changes or compliance issues. The project remains in compliance based on the annual review. For Condition 1, the project reported that the 2018 upstream passage study was consistent with prior studies, and agreement with CTDEEP to forego the 2019 study and make minor modifications to improve attraction flow and passage.

This decision is preliminary pending the 30-day appeal window. Only those who commented in the initial application 60-day comment period are eligible to file an appeal. Such appeal needs to include an explanation as to how the projects do not meet the LIHI criteria. Appeal requests can be submitted by email to comments@lowimpacthydro.org with “Occum Hydroelectric Project” in the subject line, or by mail addressed to the Low Impact Hydropower Institute, 329 Massachusetts Ave, Suite 2, Lexington, MA 02420. All requests will be posted to the website and the applicant will have an opportunity to respond and any response will also be posted. Requests must be received by 5 pm Eastern time on July 12, 2018.  The full application and reviewers report are available at the bottom of this page.

If no appeal requests are received and the decision becomes final, the new term for the Occum Project will be March 6, 2018 through March 5, 2023.

February 28, 2018: The Low Impact Hydropower Institute has received a complete application for a new term of Low Impact Certification for the Occum Hydroelectric Project (LIHI # 105). The Project is located on the Shetucket River, a tributary to the Thames River, in the Village of Occum, City of Norwich and Village of Versailles, Town of Sprague, New London County, Connecticut.

LIHI is seeking public comment on this application.  Specifically, we are interested in knowing whether you think the Project meets the LIHI Low Impact Certification Criteria, as revised in the 2nd Edition Handbook.  Please review the program and criteria in LIHI’s revised Handbookand then review the Project’s 2018 application materials posted below.

Comments that are directly tied to specific LIHI criteria (flows, water quality, fish passage, etc.) will be most helpful, but all comments will be considered.  Comments may be submitted to the Institute by e-mail at comments@lowimpacthydro.org with “Occum Comments” in the subject line, or by mail addressed to the Low Impact Hydropower Institute, 329 Massachusetts Avenue, Suite 2, Lexington, MA 02420.  Comments must be received at the Institute on or before 5 pm Eastern time on April 29, 2018 to be considered.  All comments will be posted to the web site and the applicant will have an opportunity to respond.  Any response will also be posted.

March 6, 2013: Norwich Public Utilities has submitted an application for the certification of its Occum Hydroelectric Project. The application was posted and the public comment period was opened.