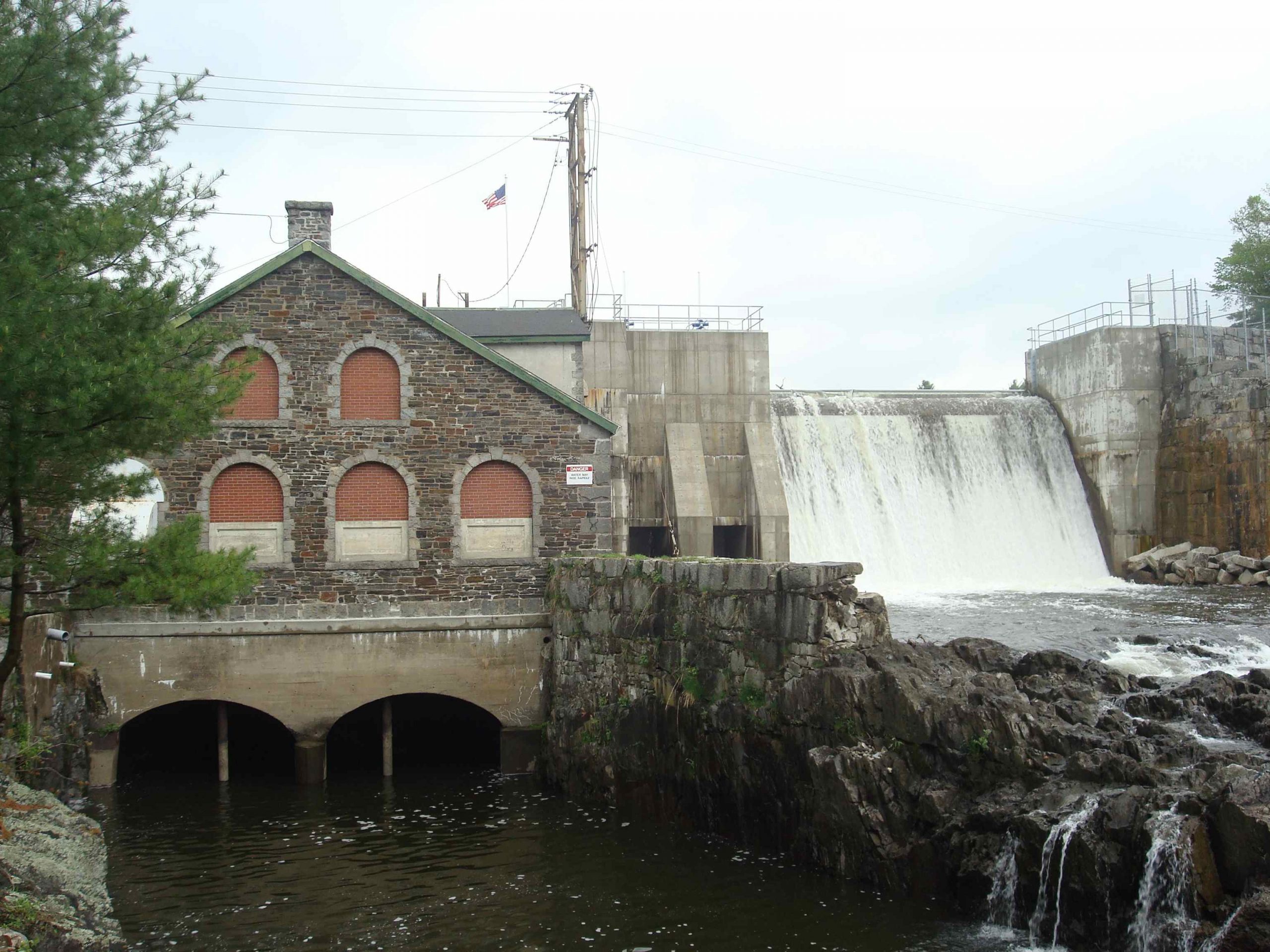 The Union Gas Project is located on Messalonskee Stream in Waterville, Maine. The project is one of four hydropower facilities between Messalonskee Lake dam and the Kennebec River. Three of the facilities, Union Gas, Rice Rips (LIHI #59), and Oakland (LIHI #60) are licensed together under FERC project No. 2556. The Automatic project (LIHI #72) is located upstream of Union Gas which is situated 1 mile upstream of the confluence of Messalonskee Stream with the Kennebec River. The original dam was constructed in the early 1900’s, it failed in 2001 and was rebuilt in 2007. Project works consist of a 343-foot-long dam with 1.5-foot-high flashboards; a powerhouse containing one 1.5-MW turbine/generator; and a 1.5-mile-long impoundment with a gross storage capacity of 600 acre-feet. The dam creates a bypassed reach approximately 1 mile long.

The project’s operational mode is dependent on inflow to Messalonskee Lake. When inflow to Messalonskee Lake is greater than approximately 570 cfs, the project is operated as a run-of-river project. All water that does not go through the turbines is passed over the spillway. When inflow is less than approximately 570 cfs, the project is cycled based on stored water that is released from Messalonskee Lake. The project provides a minimum flow of 15 cfs. This flow regime is based on recommendation from the Maine Department of Environmental Protection (MDEP) to assist in improving water quality in the river and protecting aquatic biota.

In 2010, the Messalonskee Stream projects began installation of upstream and downstream passage for American eel. These facilities were completed in 2018 and approved for permanent passage in 2019 by Maine Department of Marine Resources (MDMR).

The project lands consist of 19 acres. The project area is highly developed and bordered by a steep gradient with commercial buildings and residential homes. The shoreline in the project tailrace area is predominantly granite and gravel substrate which project operations have minimal impact on.

Threatened or endangered species potentially present in the project vicinity include Northern long-eared bat, Atlantic salmon, and black term. The project area does not provide any suitable habitat for the bat species. Waterfowl surveys of the project area concluded that project operations do not impact habitat or nesting practices for the black tern. The species has been observed nesting in the Messalonskee Lake impoundment. According to USFWS, providing passage for Atlantic salmon in the Messalonskee watershed is not desirable.

Several precontact period archaeological resources have been identified in the vicinity of the Messalonskee Stream projects. The project owner periodically assesses any impacts on these resources with the assistance of the Maine Historic Preservation Commission. The Commission concluded that project operations are not adversely impacting the resources in the area.

Recreational resources at the project include a boat ramp on the Kennebec River, fishing in the tailrace with informal access on the east side of the river, and an ADA accessible fishing platform in Messalonskee Lake. Public access is provided free of charge.

2022: No material changes or compliance issues were identified. The project remains in compliance based on the annual review.  The project reported on the 2021 downstream American eel passage study which resulted in 14 eels observed.  Nightly shutdowns during eel migration season continue.

2021: Annual reporting for the current Certificate has not yet taken effect. However, the project reported continuation of nighttime shutdowns from September 1 to October 30 for downstream passage of American eels.

August 27, 2021: The Low Impact Hydropower Institute has issued a final decision on the recertification of the Union Gas Project. The 30-day appeal window closed on August 26, 2021 and no appeals were filed. Therefore, the decision to recertify the project is now final. The new term is May 9, 2020 through May 8, 2028.

This decision is preliminary pending the 30-day appeal window. Only those who commented on the initial application during the 60-day comment period are eligible to file an appeal. Such appeal needs to include an explanation as to how the Project does not meet the LIHI criteria. Appeal requests can be submitted by email to comments@lowimpacthydro.org with “Union Gas Project” in the subject line, or by mail addressed to the Low Impact Hydropower Institute, 1167 Massachusetts Ave, Office 407, Arlington, MA 02476.
All requests will be posted to the website. The applicant will have an opportunity to respond and any response will also be posted. Requests must be received by 5 pm Eastern time on August 26, 2021. The full applications and review reports are available below.

If no appeal requests are received and the decision becomes final, the Certification term for the Project will be May 9, 2020 through May 8, 2028.

May 3, 2021: The Low Impact Hydropower Institute (LIHI) has received a complete recertification application from Messalonskee Stream Hydro Associates for the Union Gas Project.

LIHI is seeking comment on the application. Comments that are directly tied to specific LIHI criteria (flows, water quality, fish passage, etc.) will be most helpful, but all comments will be considered. Comments may be submitted to LIHI by e-mail at comments@lowimpacthydro.org with “Union Gas Comments” in the subject line, or by mail addressed to the Low Impact Hydropower Institute, 1167 Massachusetts Avenue, Office 407, Arlington, MA 02476. Comments must be received at the Institute on or before 5 pm Eastern time on July 2, 2021 to be considered. All comments will be posted to the web site and the applicant will have an opportunity to respond. Any response will also be posted. The application can be found below.

May 2, 2016: LIHI Executive Director Michael J. Sale, using authority delegated from the LIHI Governing Board, has certified that the Union Gas Hydroelectric Project (FERC No. P-2556) satisfies the LIHI Certification Criteria. A Preliminary Decision was announced on April 1, 2016, and a 30-day appeal period was open through May 1, 2016. No requests for appeal were received. This Certification Decision includes one facility-specific condition, as follows:

December 4, 2015: LIHI has received a comment letter from the Maine Department of Marine Resources in support of the recertification of the Union Gas project. The comment may be found in the Files section below.

November 24, 2015: The Low Impact Hydropower Institute has received a complete application for a new term of Low Impact Certification for the Union Gas Hydroelectric project.  The application materials can be found in the Files section below.

The public comment period for this application closed on January 23, 2015.

June 19, 2015: The Union Gas Project has been granted an extension of the current certificate term. The new expiration date is December 31, 2015. See ExtensionLetter_2015Recert for explanation below.

July 9, 2010: The public comment period for the application for certification has been closed.

May 9, 2010: Messalonskee Stream Hydro Associates has submitted an application for certification of the Union Gas Hydroelectric Project. A public comment period will remain open for 60 days.