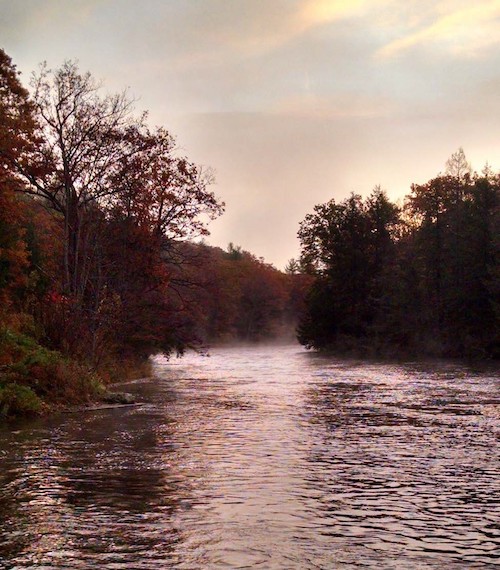 The Ashuelot and Lower Robertson certification includes the Ashuelot and Lower Robertson Hydroelectric Projects (both FERC exempted) located on the Ashuelot River in the town of Winchester, New Hampshire, near the border with Hinsdale. The projects were built in1985 with almost identical designs and equipment. The Ashuelot River flows from its headwaters in Pillsbury State Park through the towns of Gilsum and Keene to join the Connecticut River in Hinsdale, New Hampshire. Dams upstream of the project include the Ashuelot Park Dam, Surry Mountain Dam, Otter Brook Dam, and Nash Mill Dam. The Fiske Mill dam is located downstream.

The Lower Robertson dam is located about 1 mile upstream of Ashuelot and is approximately 125 feet long and 18 feet high. The project has automated level control which maintains pond level during normal flows. There are three sets of Obermeyer crest gates: two at 16 feet wide by 6 feet tall, located between the spillway and the intake structure, and one 76 feet wide by 2 feet tall, located on the spillway. The Lower Robertson impoundment has a surface area of 8.6 acres. The intake structure, powerhouse, and tailrace are located at the north end of the dam. The powerhouse has three Flygt turbine units with a total installed capacity of 840 kW. An informal portage trail exists along the left bank of the dam.

The Ashuelot dam is approximately 144.5 feet long and 18 feet high. The project has automated level control which maintains pond level during normal flows. There is a single set of Obermeyer crest gates along the top of the spillway. The Ashuelot impoundment has a surface area of 1.6 acres. The intake structure, powerhouse, and tailrace are located at the south end of the dam. The powerhouse has three Flygt turbine units with a total installed capacity of 870 kW. A portage trail was built in 2010 and has been maintained since.

The project operates in a run-of-river mode at both developments and is fully automated. Pressure sensors in the impoundments send data to a computer which ensures impoundment levels stay consistent. The project provides a minimum flow of 203 cfs or inflow, whichever is less, from each development to protect downstream aquatic habitat. This flow regime was developed based on consultation with New Hampshire Fish and Game (NHFG) and US Fish and Wildlife Service (USFWS).

Waters within the project reach are designated Class B, though water quality monitoring data was recently collected by recommendation of New Hampshire Department of Environmental Services. NHDES provided recommendations for parameters, monitoring locations and frequencies, and quality control practices.

The project lands consist of roughly 2.5 acres. Most of the land abutting the impoundments is private property and beyond the control of the project. Run-of-river operation minimizes the potential for erosion of the shorelines. The downstream reaches for both sites are very similar: fast moving current in a relatively steep and rocky riverbed, bordered by mixed hard and softwood forest returning from cleared land. The Lower Robertson development is located next to Route 119 on the north side and abandoned mill developments on the south side. The Ashuelot impoundment is forested on both sides of the river. Due to the project’s small footprint, no lands of ecological value exist in the project area.

PLUS-Standard: The project owner voluntarily donated to the Society for the Protection of New Hampshire Forests for the preservation of 1,800 acres of forest land in the Ashuelot River headwaters. The donations were: $15,000 in 2008, $5,000 in 2010, and $5,000 in 2014. The land was successfully preserved and is now named the Ashuelot River Headwaters Forest. The project owner intends to continue to support preservation of the Ashuelot River basin with annual donations to selected environmental organizations and causes that were identified as most urgently in need of funding. Recently, donations have been made to projects in the California Brook focus area in Chesterfield (Monadnock Conservancy) and now the Surry Mountain Project in Surry (The Nature Conservancy). The project owner also donates to energy efficiency projects in the region, recognizing that energy waste exacerbates climate change.

Threatened or endangered species potentially present in the project vicinity include the dwarf wedgemussel, Northern long-eared bat, and long-spined sandbur. The mussel species is known to inhabit the Ashuelot River, but based on information from USFWS, not in the project vicinity. No bat hibernacula or roosting sites exist in the project areas, but should any be found, the project has committed to following the USFWS 4(d) rule concerning protection of the species habitat. Historical data from the NH Natural Heritage Bureau indicates that the long-spined sandbur may be present within the project vicinity, but the last siting of the species was in 1952. Generally, the area has been successful in recovering from industrialization. Bald eagles have been observed flying over the project, as well as blue herons. River otters, mink, and beaver sightings are very common.

While the Ashuelot development does not house any cultural resources in its project area, the Lower Robertson dam and facilities are of local historical interest. The State Historic Preservation Office has been consulted to determine any impact of construction activities, though none have occurred since the 1980s. Upstream fish passage facilities may be needed in the near future, though the SHPO has indicated that installation of such facilities would have no effect on local historical resources. However, the project must consult with the SHPO to ensure that no adverse impacts will occur should such structures be prescribed.

Recreational resources at the project include fishing and boating access, as well as a portage trail for paddler access. Public access is provided free of charge.

October 28, 2019: The decision to recertify the Ashuelot/Lower Robertson Hydroelectric Project is final. No appeals were received during the appeal period which closed on October 26, 2019. The new certification term for the Project is from June 29, 2019 through June 28, 2027.

This decision is preliminary pending the 30-day appeal window. Only those who commented on the initial application during the 60-day comment period are eligible to file an appeal. Such appeal needs to include an explanation as to how the Project does not meet the LIHI criteria. Appeal requests can be submitted by email to comments@lowimpacthydro.org with “Ashuelot River/Lower Robertson Hydroelectric Project” in the subject line, or by mail addressed to the Low Impact Hydropower Institute, 329 Massachusetts Ave, Suite 6, Lexington, MA 02420. All requests will be posted to the website.  The applicant will have an opportunity to respond and any response will also be posted. Requests must be received by 5 pm Eastern time on October 26, 2019.  The full application and reviewers report are available below.

If no appeal requests are received and the decision becomes final, the Certification term for the Project will be June 29, 2019 for a term of eight (8) years, which will expire on June 28, 2027.

June 11, 2019: The Low Impact Hydropower Institute has received a complete application for Low Impact Recertification of the Ashuelot River/Lower Robertson Hydroelectric Projects.  LIHI is seeking public comment on this application.  Specifically, we are interested in knowing whether you think the Project meets the LIHI Low Impact Certification Criteria, as revised in the 2nd Edition Handbook.  Please review the program and criteria in LIHI’s revised Handbook and then review the Project’s application materials below.

Comments that are directly tied to specific LIHI criteria (flows, water quality, fish passage, etc.) will be most helpful, but all comments will be considered.  Comments may be submitted to the Institute by e-mail at comments@lowimpacthydro.org with “Ashuelot River Project Comments” in the subject line, or by mail addressed to the Low Impact Hydropower Institute, 329 Massachusetts Avenue, Suite 6, Lexington, MA 02420.  Comments must be received on or before 5 pm Eastern time on August 10, 2019 to be considered.  All comments will be posted to the web site and the applicant will have an opportunity to respond.  Any response will also be posted.

April 8, 2015: The Ashuelot River Hydroelectric Project has been certified for a second five-year term of low impact certification, effective June 29, 2014 and expiring June 29, 2019. In rendering this Certification, the Institute’s Executive Director used authority delegated by the LIHI Governing Board and a full review of the Application Reviewer’s report (available in the Files section below) and all public comments and additional materials provided by the Applicant.

September 4, 2014: The Low Impact Hydropower Institute has received an application for a second term of certification of the Ashuelot River Hydroelectric Project. The application materials are available in the “Files” section below.

June 29, 2009: Ashuelot Hydro, Inc. has submitted an application for certification of the Ashuelot and Lower Robertson Hydroelectric Projects. A public comment period for the application will remain open for 60 days, until August 30, 2009.