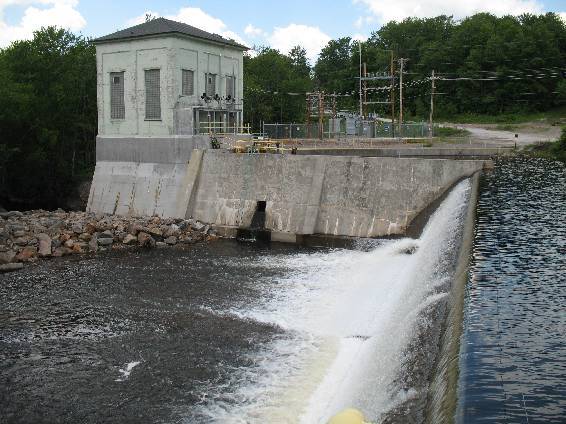 The Newton Falls Project consists of two developments (Upper Newton Falls and Lower Newton Falls), located on the Oswegatchie River in the Town of Clifton, St. Lawrence County, New York. The original timber crib dams at the project site were constructed in 1895 and replaced by the current dams in the late 1920s. Both dams were built for power production and various aspects of the dams have been rehabilitated several times since their construction. There are seventeen dams on the Oswegatchie River. The Cranberry Lake Hydroelectric Project is located upstream of the project and several projects are located downstream of the project. These include the Oswegatchie Project (LIHI #161).

The Upper Newton Falls development operates in a peaking/load-following mode and provides a year-round minimum flow of 20 cfs via the downstream fish passage outlet. The Lower Newton Falls development is operated in a run-of-river mode and provides a minimum flow of 100 cfs. This minimum flow is achieved either by passing flows over the spillway or through the turbine when sufficient flows allow. This flow regime was developed with US Fish and Wildlife Service (USFWS) and NY State Department of Environmental Conservation (NYSDEC) based on demonstration flow studies conducted during the last relicensing period.

Several natural falls in the project area have historically precluded access for migratory fish species. Fishery surveys dating back as far as 1931 have noted that no anadromous or catadromous fish species exist in the project area. Downstream resident fish passage is provided at Upper Newton Falls by a steel bulkhead notched to release 20 cfs of fish passage flow, which leads to a plunge pool at the base of the spillway. Passage is also provided at the Lower Newton Falls development via a notch at a sluice gate which also releases a 20 cfs fish passage flow which leads to an existing pool. This structure and passage flows were developed with consultation from USFWS and NYSDEC to provide effective fish passage. Resident species include largemouth and smallmouth bass, pike, sucker, minnow species, and brook, brown, and rainbow trout.

The project lands consist of less than 2 acres. Lands under project ownership are limited and are overseen by the project’s shoreline erosion monitoring plan. The plan focuses on the Upper Newton Falls development and contains provisions for preservation of an area adjacent to the river with potential for archaeological resources. An impoundment monitoring system ensures impoundment fluctuations are limited to 0.1 foot every minute, minimizing potential for shoreline erosion.

Threatened or endangered species potentially present in the project vicinity include the Northern long-eared bat, bald eagle, and northern reed grass. The primary concern for the bat species pertains to tree-clearing. The project provides a woodland buffer, ensuring proper protection for the species. NYSDEC was consulted in regard to potential impacts on bald eagle individuals and the agency reported that it was unlikely that project operations would have any impact on the species or its nesting habitat. Bald eagle populations are ‘doing very well’ in New York.

The only cultural resources in the project area could potentially be found in the area adjacent to the Upper Newton Falls development mentioned above. This stretch of land has the potential for archaeological resources and must remain under careful observation. Otherwise, the State Historic Preservation Office has no concerns of potential impact to historic structures or buildings in the project vicinity due to project operation.

Recreational resources at the project include a car-top boat launch, canoe put-in/take-out area, and parking area. Public access is provided free of charge.

Condition satisfied in 2018. Condition 1: The Owner shall install, and develop a flow rating for a staff gage or monument in the bypassed reach of the lower development and shall provide the rating to the resource agencies and FERC as provided for in FERC’s Article 404 letter of November 4, 2008. Confirmation of completion shall be filed with LIHI by December 31, 2018.  LIHI may suspend or revoke Certification if this requirement is not met in full by that date unless it can be demonstrated that any additional delays are due to factors beyond the Owner’s control.

2018: There were no reported changes or compliance issues. The project remains in compliance based on the annual review. For Condition 1, the project confirmed installation of the staff monument, thus satisfying the condition.

June 5, 2018: The Low Impact Hydropower Institute (LIHI) preliminarily approved the Newton Falls Hydroelectric Project for a new 5-year term of Low Impact Certification. This decision is preliminary pending the 30-day appeal window. Only those who commented in the initial application during the 60-day comment period are eligible to file an appeal. Such appeal needs to include an explanation as to how the project does not meet the LIHI criteria. Appeal requests can be submitted by email to comments@lowimpacthydro.org with “Newton Falls Hydroelectric Project” in the subject line, or by mail addressed to the Low Impact Hydropower Institute, 329 Massachusetts Ave, Suite 2, Lexington, MA 02420. All requests will be posted to the website and the applicant will have an opportunity to respond and any response will also be posted. Requests must be received by 5 pm Eastern time on July 5, 2018.  The full application and reviewers report are available below. If no appeal requests are received and the decision becomes final, the new term for the Newton Falls Project will be November 2, 2017 to November 1, 2022.

March 13, 2018: The Low Impact Hydropower Institute has received a complete application for a new term of Low Impact Certification for the Newton Falls Hydroelectric Project. The Project is located on the Oswegatchie River in the Town of Clifton, St. Lawrence County, New York, approximately 98 miles upstream of the river’s confluence with the St. Lawrence River.  LIHI is seeking public comment on this application.  Specifically, we are interested in knowing whether you think the Project meets the LIHI Low Impact Certification Criteria, as revised in the 2nd Edition Handbook.  Please review the program and criteria in LIHI’s revised Handbook and then review the Project’s 2018 application materials posted below. Comments that are directly tied to specific LIHI criteria (flows, water quality, fish passage, etc.) will be most helpful, but all comments will be considered.  Comments may be submitted to the Institute by e-mail at comments@lowimpacthydro.org with “Newton Falls Comments” in the subject line, or by mail addressed to the Low Impact Hydropower Institute, 329 Massachusetts Avenue, Suite 2, Lexington, MA 02420.  Comments must be received at the Institute on or before 5 pm Eastern time on May 12, 2018 to be considered.  All comments will be posted to the web site and the applicant will have an opportunity to respond.  Any response will also be posted.

March 13, 2018: The Newton Falls Hydroelectric Project has been granted an extension of the current term through June 30, 2018.

December 29, 2012: The Newton Falls Project has been recertified as low impact for a second five year term, effective November 2, 2012 and expiring November 2, 2017.

November 1, 2007: Brookfield Power has submitted an application for certification of the Newton Falls Hydroelectric Project.