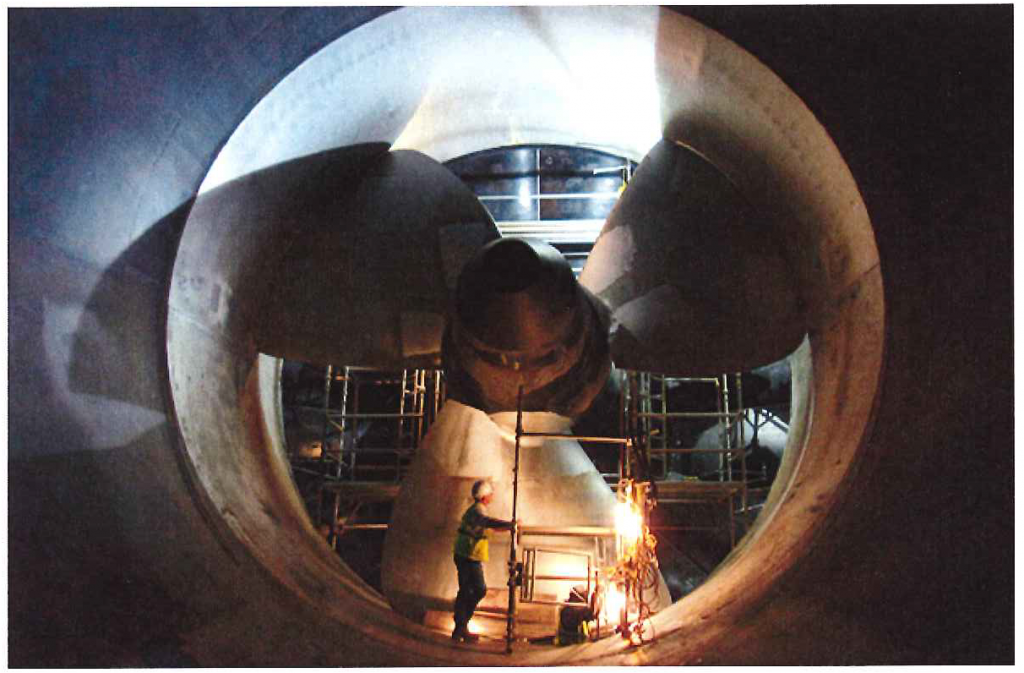 Original construction of the USACE locks and dam was completed in 1976. Excavation and cofferdam construction for the hydro facility started in June 2011 and powerhouse construction began in December 2012. The project reached full commercial operation in February of 2016.

The project includes the existing dam and impoundment, a power canal, an intake structure, and a powerhouse. No bypassed reach is present at the project.

The high-lift, gated dam is 1,128 feet long, including a 111-foot fixed weir with an 84-foot open crest. The dam has eight Tainter gates with a clear span of 110-feet between piers, a damming height of 26 feet above the sills, and clearance above maximum high water when fully raised of approximately 5 feet. The approach channel is roughly 200 feet long with a wall on the river side, leading to a concrete powerhouse. Two horizontal-axis bulb-type turbine generator units with a total installed capacity of 44 MW are housed within. Discharge from the powerhouse is conveyed downstream via a 700-foot-long, 200-foot-wide tailrace channel. A 138-kilovolt transmission line distributes generated electricity to the grid.

The project operates in an instantaneous run-of-river mode and is located at a dam which impounds a 6,400-acre reservoir. When the project is operating, total turbine flow is determined by the USACE Lockmaster such that the upper impoundment (Willow Island) is maintained between 603.2 feet ORD and 601.8 feet ORD, depending on the total Ohio River flow, and the lower impoundment (Belleville) at 582 feet. If the Ohio River flow exceeds 142,000 cfs or falls below 6,000 cfs, the hydro project shuts down and all flow passes through or over the dam outlet works, since the outlets are designed to be submerged during high flows. The USACE maintains the impoundment level when discharging any flow through the dam. During low flow periods when the river is being regulated for protection of navigation or other federal interests, all discharges from the hydro project are controlled by the Lockmaster, who issues specific discharge instructions. A minimum flow of 2,000 cfs is provided within the tailrace during periods of project shutdown for the protection of aquatic habitat and maintain recreational fishing access.

Designated uses for waters within the project reach include support of aquatic life, contact recreation, and public water supply. The entire Ohio River is designated as impaired for fish consumption due to PCB and dioxin contamination. Additionally, two-thirds of the river is designated as impaired for contact recreation due to E. coli/fecal coliform bacteria, though not in the immediate vicinity of the project. These impairments are geographically extensive, thus cannot be caused or exacerbated by the project. Dissolved oxygen monitoring was conducted from 2016-2020 to review project impacts on this water quality criteria. The 5-year report concluded that dissolved oxygen levels were meeting or exceeding state standards each year.

The Ohio River is considered a high-quality river supporting an excellent warm water fishery. In the vicinity of the project, it has historically been host to potamodromous species including white perch, white bass, yellow bass, striped bass, and hybrid striper. These species have been reintroduced to the project vicinity but do not rely on migration to complete their lifecycles. Migratory upstream passage prescriptions have not been made at the downstream Belleville Project nor at the Robert C. Byrd Project (further downstream). The Willow Island Pool hosts a healthy aquatic community and is designated ‘good’ or ‘very good’ habitat for macroinvertebrates.

In terms of downstream passage, no diadromous species are present in the project vicinity, but a variety of potamodromous and riverine species frequent the project area. These include various shiners, minnows, sunfish, and suckers as well as smallmouth bass and gizzard shad. The pools upstream and downstream of the project exhibit some of the highest fish diversity in the Ohio River system. Existing fish protection measures at the project include a fixed weir connected to the powerhouse that allows fish to pass over the weir structure during high flow periods, and two lock chambers that allow fish to move downstream as lock operations allow. Trashracks with 8.25-inch spacing minimize the potential for impingement at the project. While many fish could become entrained, the very large diameter Kaplan bulb turbines with low rotational speed of 64 rpm, three large-diameter blades, wide gaps between blades, and relatively broad and smooth leading edges of blades also minimize blade strike and resulting mortality to entrained fish.

The project lands consist of 24 acres of USACE-owned land. Lands surrounding the project area include industrial, commercial, residential, and agricultural uses. Beyond the shoreline area, surrounding lands are generally forested hills with numerous runoff streams. No lands of ecological significance occur in the project vicinity. After construction of the project was completed, the owner revegetated the surrounding area with native grasses, legumes, trees, and shrubs with a high rate of successful ground cover and tree survival. Several areas of erosion have occurred and are being addressed and monitored on an annual basis.

Threatened or endangered species potentially present in the project vicinity include the Indiana bat, Northern long-eared bat, several species of bivalves, Western banded killifish, goldeye, Ohio lamprey, Northern madtom, pugnose minnow, American eel, blue sucker, Tippecanoe darter, mountain madtom, channel darter, river darter, paddlefish, and bald eagle. Critical habitat for the listed bivalve and bat species is not found within the project vicinity. Consultation with the US Fish and Wildlife Service concluded that the project would not likely impact any of the listed species due to run-of-river operations and lack of critical habitat for those species. Mussel density studies were conducted before and after construction of the project, with results noting either similar or greater densities of these species post-construction.

Prior to construction of the hydro project, five sites of historic or cultural significance were identified – three prehistoric archaeological sites, a historic dwelling, and the Willow Island Locks and Dam. USACE concluded that part of one archaeological site could be adversely impacted by the project and a data recovery plan was executed by the project owner, USACE, and the West Virginia State Historic Preservation Office. A Cultural Resources Management Plan was also developed, detailing documentation requirements, mitigative actions, and potential impacts of the project on listed resources.

January 5, 2022: The Low Impact Hydropower Institute has issued a final decision on the certification of the Willow Island Project.  The 30-day appeal window closed on December 31, 2021 and no appeals were filed.  Therefore, the decision to recertify the project is now final.  The new term is August 17, 2021 through August 16, 2031,reflecting the extended terms for Certificates that became effective on January 1, 2022.. The Certificate includes the following conditions:

This decision is preliminary pending the 30-day appeal window. Only those who commented on the initial application during the 60-day comment period are eligible to file an appeal. Such appeal needs to include an explanation as to how the Project does not meet the LIHI criteria. Appeal requests can be submitted by email to comments@lowimpacthydro.org with “Willow Island Project” in the subject line, or by mail addressed to the Low Impact Hydropower Institute, 1167 Massachusetts Ave, Office 407, Arlington, MA 02476. All requests will be posted to the website. The applicant will have an opportunity to respond and any response will also be posted. Requests must be received by 5 pm Eastern time on December 31, 2021. The full application and reviewer’s report are available below.

If no appeal requests are received and the decision becomes final, the Certification term for the Project will be August 17, 2021 through August 16, 2026.

August 19, 2021: The Low Impact Hydropower Institute has received an update to the 2017 application for the Willow Island Project. The original application had been put on hold at that time pending receipt of additional study information, and is now reactivated for review.

LIHI is seeking public comment on this application. Specifically, we are interested in knowing whether you think the Project meets the LIHI Low Impact Certification Criteria, as revised in the 2nd Edition Handbook. Please review the program and criteria in LIHI’s revised Handbook and then review the Project’s application materials below.

Comments that are directly tied to specific LIHI criteria (flows, water quality, fish passage, etc.) will be most helpful, but all comments will be considered. Comments may be submitted to the Institute by e-mail at comments@lowimpacthydro.org with “Willow Island Project Comments” in the subject line, or by mail addressed to the Low Impact Hydropower Institute, 1167 Massachusetts Avenue, Arlington, MA 02476. Comments must be received on or before 5 pm Eastern time on October 18, 2021 to be considered. All comments will be posted to the web site and the applicant will have an opportunity to respond. Any response will also be posted.

July 5, 2017: On July 5, 2017, the Low Impact Hydropower Institute (LIHI) received a complete application from Cube Hydro Partners on behalf of American Municipal Power, Inc. for the Low Impact Certification of the Willow Island Lock and Dam Project, FERC No. P-6902, located on the Ohio River in Ohio and West Virginia.

LIHI is seeking comment on the Willow Island application for certification. Comments that are directly tied to specific LIHI criteria (flows, water quality, fish passage, etc.) will be most helpful, but all comments will be considered.  Comments may be submitted to the Institute by e-mail at comments@lowimpacthydro.org with “Willow Island Project Comments” in the subject line, or by mail addressed to the Low Impact Hydropower Institute, 329 Massachusetts Avenue, Suite 2, Lexington, MA 02420.  Comments must be received at the Institute on or before 5 pm Eastern time on September 6, 2017 to be considered.  All comments will be posted to the web site and the applicant will have an opportunity to respond.  Any response will also be posted.